Return of the Mountain Man 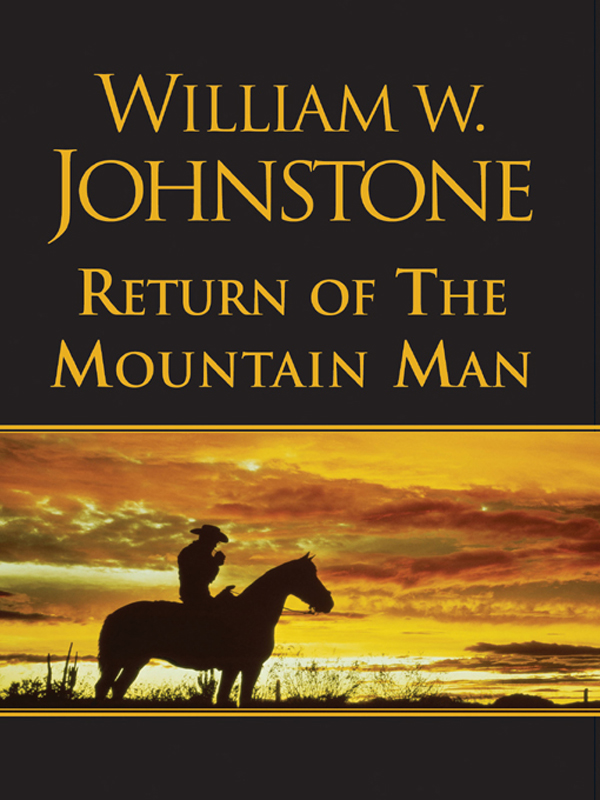 To my friend who answers my endless questions concerning weapons
of the old west: Hollis Erwin

Back of the bar, in a solo game, sat Dangerous Dan McGrew. And watching his luck was his light-o'-love, the lady that's known as Lou.

T
he man called Smoke looked at the new wanted poster tacked to a tree. This one had his likeness on it. He smiled as he looked at the shoulder-length hair and the clean-shaven face on the poster. The artist had done a dandy job.

But it in no way resembled the man who now called himself Buck West.

Kirby Jensen had been sixteen years old when the old mountain man called Preacher hung the nickname Smoke on him. Preacher had predicted that Smoke would turn out to be a very famous man. And he had. As one of the most feared gunfighters in all the west.

It was not a reputation Smoke had wanted or sought.

Smoke now wore his hair short-cropped. A neat, well-trimmed beard covered his face. He no longer wore one pistol in cross-draw fashion, butt-forward. He now wore his twin .44s butt back and the holsters tied down low. He was just as fast as before. And that was akin to lightning.

He had turned his Appaloosa, Seven, loose in a valley several hundred miles to the east. A valley so lovely it was nearly impossible to describe.

Nicole would have loved it.

Seven had gone dancing and prancing off, once more running wild and free.

He shook his head and pushed the face of his dead wife from his mind. He turned his unreadable, cold, emotionless brown eyes to the west. The midnight-black stallion he now rode stood steady under his weight. The man now called Buck stood six feet, two inches, barefooted. He weighed one eighty: all hard-packed muscle and bone. His waist was lean and his short hair ash-blond.

The stallion shook his head. Buck patted him on the neck. The stallion quieted immediately. The animal's eyes were a curious yellow/green, a vicious combination that vaguely resembled a wolf's eyes. The stallion had killed its previous owner when the man had tried to beat him with a board. Smoke had bought the horse from the man's widow, gentled him, and learned to respect the animal's feelings and moods.

The stallion's name was Drifter.

Smoke had carefully hidden his buckskins, caching them with his saddle and other meager possessions in the valley where the Appaloosa, Seven, now grazed and ran free with his brood of mares.

Smoke had very carefully pushed all thoughts of the past behind him. He had spent months mentally conditioning himself not to think of himself as the gunfighter Smoke. His name was now Buck. Last names were not terribly important in the newly opened western frontier, and it had been with a smile that Buck chose West as his last name.

Buck laughed. But it was more a dark bark, totally void of humor.

Drifter swung his head around, looking at the man through cold killer eyes. Buck's packhorses continued to graze.

High above, an eagle soared, pushing and gliding toward the west. Buck could have sworn that it was the same eagle he had seen months back, after the terrible shoot-out at the silver camp not far from the Uncompahgre. At least fourteen men had died under his guns that smoky, bloody day. And he had taken more than his share of lead, as well. It had taken him months to fully recover.

Many months back, in the southwestern corner of Wyoming, he had seen the first wanted poster.

THE OUTLAW AND MURDERER

He had removed the wanted poster and tucked it in his shirt pocket. He knew he would see many, many more of the dodgers as he made his way west. He had looked up to watch an eagle soar high above him, gliding majestically northwest-ward.

He had said, with the big skies and grandeur of the open country as witnesses, “Take a message with you, eagle. Tell Potter and Richards and Stratton and all their gunhands that I'm coming to kill them. For my Pa, for Preacher, for my son, and for making me an outlaw. And they'll die just as hard as Nicole did. You tell them, eagle. Tell them I'm coming after them.”

The eagle had circled, dipped its wings, and flown on.

Buck shook away the memories, clearing his head of things dead and buried and gone. He let the smoldering coals of revenge burn on, deep within his soul. He would fan the coals into white-hot flames when branding time arrived. And he would do the brandingâwith hot lead.

The man who had earned the reputation as one of the most feared gunfighters in the newly opened west spoke gently to Drifter and the big cat-footed stallion moved out through the timber.

Buck was just west of the Rockies, skirting south of the Gros Ventre Range. He wouldâunless he hit some sort of snagâmake Moose Flat in two days. Once at the Flat, he would camp for a few days and rest Drifter. Then he would ride for Bury, Idaho Territory.

Bury was a good name, Buck thought. For that is exactly what I intend to do to Stratton and Richards and Potter: bury them!

It was cool during the day and flat-out cold at night; early spring when Buck crossed the still ill-defined line into Idaho Territory. He had seen several bands of Indians, but they had left him alone. He knew they'd seen him, for this was their country, and they knew it as intimately as the roots of a tree knows the earth that nurtures it. But Indians, as Preacher had once put it, were notional critters.

Buck moved out, slowly. He would take his time, get accustomed to the country, and eyeball everything in sight. For if he made it out of Bury alive, he was going to need more than one back door and one hell of a good hiding place.

Buck wore gray pin-striped trousers tucked into soft calfskin boots. Black shirt. His hat was black, low-crowned, and wide-brimmed. His leather vest was black. His belt was silver-studded with a heavy buckle. A jacket and slicker were tied behind the saddle, over the saddlebags. A Henry repeating rifle rested in a boot, butt forward instead of the usual fashion of the butt facing back. He did not ride in the usual slump-shouldered manner of the old mountain men, but instead sat his saddle ramrod straight, cavalry fashion. Because of this, many who saw the handsome, cold-eyed young man believed him to be ex-cavalry. He let them think it, knowing that helped to further disguise his past.

He carried a two-shot derringer in his left boot, in his right boot a long-bladed, double-edged daggerâthat knife in addition to the Bowie he wore on his gunbelt, behind his left-hand gun.

Buck was an expert with all the weapons he carried. The legend growing around the man stated there was no faster gunhand in all the west. He was faster than the Texas gun Hardin; even more steel-nerved than Wild bill; meaner than Curly Bill; when he was in the right, crueler than any Apache; as relentless in a hunt as any man who ever lived.

The old mountain man, Preacher, who helped raise him from a lad, had taught him fistfighting and boxing and Indian wrestling. But even more importantly, Preacher had taught him how to win, teaching him that it don't make a good gawddamn how you winâjust win.

The old mountain man had said, and the boy had remembered, “Long as you right, Smoke, it don't make no difference how you win. Just be sure you in the right.”

And Lord God, how fast the young man was with those deadly .44s.

Buck gave Drifter his head, letting the horse pick his own way at his own pace, staying close to the timber, away from open places, always edging slightly south and west. He wanted to enter the mostly uncharted center of the Territory from the south. Just north of the Craters of the Moon, Buck would turn Drifter's nose north until he hit the Big Lost River. He would follow that through some of the most beautiful and wild country in the Territory. He would then track the Big Lost for a time, then head more north than west until reaching the new town of Challis. There, he would resupply and head north, following the Salmon River for about thirty-five miles. Bury was located about midway between the Salmon and the town of Tendoy.

But if Buck had his way, the town of Bury would soon cease to exist.

It would be several more years before the toll road would be started from Challis, reaching to Bonanza, with a spur to Salmon. Only then would the big-scale silver mining at Bay Horse get underway.

But that was future. This was now. And Buck was not heading for Bury to pan for gold, search for silver, or start a ranch. And he really didn't care all that much if he died doing what he'd set out to doâjust so long as he got it done. The men now living and prospering in and around Bury had directly killed his brother. They had ordered out the men who had killed his father; raped, tortured, and murdered Buck's wife, Nicole; killed his baby son; and killed his best friend and mentor, the old mountain man, Preacher.

And then they had done their cruel best to kill the man who now called himself Buck West.

Stratton, Potter, and Richards had thrown their best gunhands at the young man. He had killed them all.

Buck had no intention of failing.