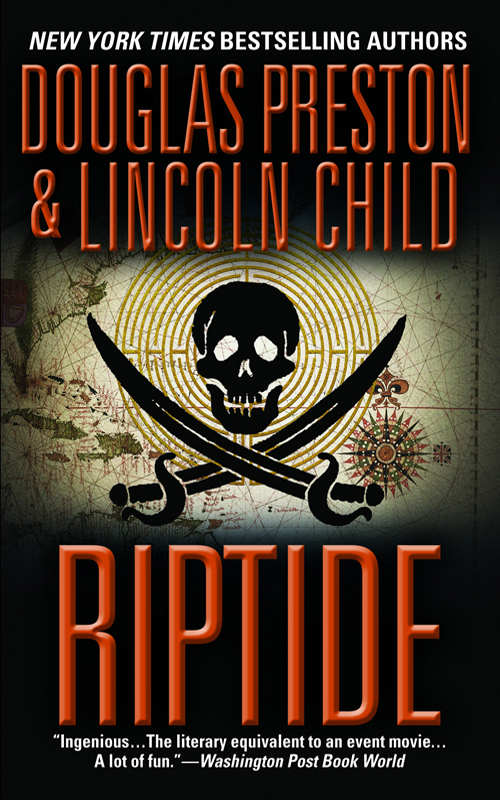 “These guys are masters at scaring the hell out of people.”

“An amazing thriller; it out-Crichtons Crichton in its grasp of technological detail, and far surpasses him in character and
suspense. Steven Spielberg, where are you?”

—S
TUART
W
OODS,
author of
Dead in the Water

“A hold-your-breath exciting tale filled with all the twists that could come with the most wicked of common sins-greed.”

“Michael Crichton and Peter Benchley, move over. I couldn’t put Riptide down. It’s nonstop action and adventure from a terrific
team.”

“A highly satisfying sea adventure… RIPTIDE pulls you in and doesn’t let you go… Has been compared to the adventure stories
of Michael Crichton. It is that and more… This is one to remember.”

“Machine-gun pacing, startling plot twists, smart use of legend, scientific lore, and the evocative setting carry the day…
an exciting adventure tale that’s bound to be one of the most popular of the summer reads.”

“Solid gold… once you start reading RIPTIDE, it won’t let you go… Preston and Child expertly deliver a thrilling adventure
story that matches any novel written by Michael Crichton, Peter Benchley, or even Robert Louis Stevenson.”

“Taut and compelling… An excellent read for those who enjoy a good mystery and are tired of detectives and politicians.”

“The Relic
and
Reliquary
were terrifying, and now this duo deliver Riptide, probably their most exciting thriller yet!… Plot twists and likable characters
drive this story to its stunning conclusion.”

“The ultimate Clive Cussler-style adventure… a perfect blend of atmospheric settings, pulse-pounding action, human conflict,
and nerve-wracking suspense… Riptide is exactly what is meant by the phrase ‘perfect summer read.’”

“A good action-packed mystery… Preston and Child have once again conquered new territory… [and] prove that they are talented
enough to write within several different genres.”

“Graphic and gripping… a high-pitched, fast-paced plot with vivid description, intriguing characters, and vibrant scenes…
The suspense never lets up and the smashing ending, with its unexpected symbolism, grabs the reader.”

The Book of the Dead

The Cabinet of Curiosities

Talking to the Ground

Dinosaurs in the Attic

Lincoln Child dedicates this book to his daughter, Veronica

Douglas Preston dedicates this book to his brother,
Richard Preston

This book is a work of fiction. Names, characters, places and incidents are either the product of the author’s imagination
or are used fictitiously, and any resemblance to actual persons, living or dead, events, or locales is entirely coincidental.

Excerpt from
The Book of the Dead
copyright © 2006 by Douglas Preston and Lincoln Child. All rights reserved. Except as permitted under the U.S. Copyright
Act of 1976, no part of this publication may be reproduced, distributed, or transmitted in any form or by any means, or stored
in a database or retrieval system, without the prior written permission of the publisher.

By Douglas Preston And Lincoln Child

A Preview of "The Book of the Dead"

W
e own a great debt to one of Maine’s finest doctors, David Preston, for invaluable help with the medical aspects of
Riptide.
We also wish to thank our agents, Eric Simonoff and Lynn Nesbit of Janklow & Nesbit; Matthew Snyder of Creative Artists Agency;
our superb editor, Betsy Mitchell, and Maureen Egen, publisher, of Warner Books.

Lincoln Child would like to thank Denis Kelly, Bruce Swanson, Lee Suckno, M.D, Bry Benjamin, M.D., Bonnie Mauer, Chérif Keita,
the Reverend Robert M. Diachek, and Jim Cush. In particular, I wish to thank my wife, Luchie, for her support, and for her
stringent (and sometimes astringent) criticism, over the past five years, of four novels-in-progress. I want to thank my parents
for instilling in me, from the beginning, a profound love for sailing and salt water that continues to this day I also wish
to acknowledge the shadowy company of centuries-dead buccaneers, pirates, codemakers and codebreakers, dilettantes, and Elizabethan
intelligence agents, for providing some of the more colorful archetypes and source material in
Riptide’s
arsenal. And, lastly, I want to give a long-overdue thank-you to Tom McCormack, ex-boss and mentor, who with enthusiasm and
perspicacity taught me so much about the art of writing and the craft of editing.
Nullum quod tetigit non ornavit.

Douglas Preston would like to express his appreciation to John P. Wiley, Jr., senior editor of
Smithsonian
magazine, and to Don Moser, editor. I would like to thank my wife, Christine, for her support, and my daughter Selene, for
reading the manuscript and offering excellent suggestions. I want to express my deepest gratitude to my mother, Dorothy McCann
Preston, and to my father, Jerome Preston, Jr., for keeping and preserving Green Pastures Farm so that my children and grandchildren
will be able to enjoy the real place that figures as one of the fictional backdrops to
Riptide.

We offer our apologies to Maine purists for reconfiguring the coastline and moving islands and channels about with brazen
abandon. Needless to say, Stormhaven and its inhabitants, and Thalassa and its employees, are fictitious and exist only in
our imaginations. Similarly, though there may be several Ragged Islands found along the Eastern seaboard, the Ragged Island
described in
Riptide
—along with the Hatch family that owns it—is a completely fictitious object.

However, some readers may note a resemblance between the historical background that opens
Riptide
and the mysterious flooded “Money Pit” of Oak Island, Nova Scotia. Although
Riptide
is a work of fiction, the Oak Island mystery, which both of us have been fascinated by since grade school, was one of the
story’s original inspirations. Douglas Preston spent a week on Oak Island researching a story for
Smithsonian
magazine, which was published in the June 1988 issue under the title, “Death Trap Treasure Seekers for Two Centuries.” The
story is available for downloading at the authors’ website,
www.prestonchild.com
.

Such a day, rum all out:—Our company somewhat sober:—A damned confusion amongst us!—Rogues a-plotting:—Great talk of separation—so
I looked sharp for a prize:—Such a day took one, with a great deal of liquor on board so kept the company hot, damned hot;
then all things went well again.

—From the logbook of Edward Teach,
aka Blackbeard, ca. 1718

Applying twentieth-century solutions to seventeenth-century problems affords either absolute success or absolute chaos; there
is no middle ground. 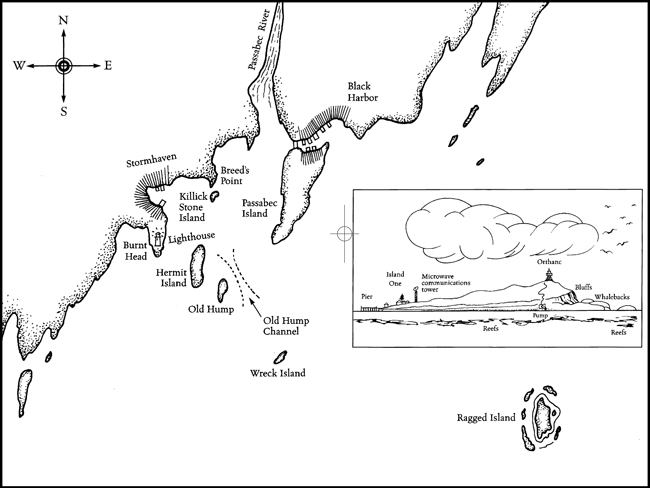 O
n an afternoon in June 1790, a Maine cod fisherman named Simon Rutter became caught in a storm and a strong riptide. His dory
overloaded with fish, he went badly off course and was forced to put in at fogbound Ragged Island, six miles off the coast.
While waiting for the heavy weather to pass, the fisherman decided to explore the deserted spot. Inland from the rocky bluffs
that gave the islet its name, he found a massive old oak tree with an ancient block and tackle dangling from one low-slung
limb. Directly underneath it the ground had subsided into a depression. Although the island was known to be uninhabited, Rutter
found clear evidence that someone had visited many years before.