Rise of the Blood Masters (Book 5) 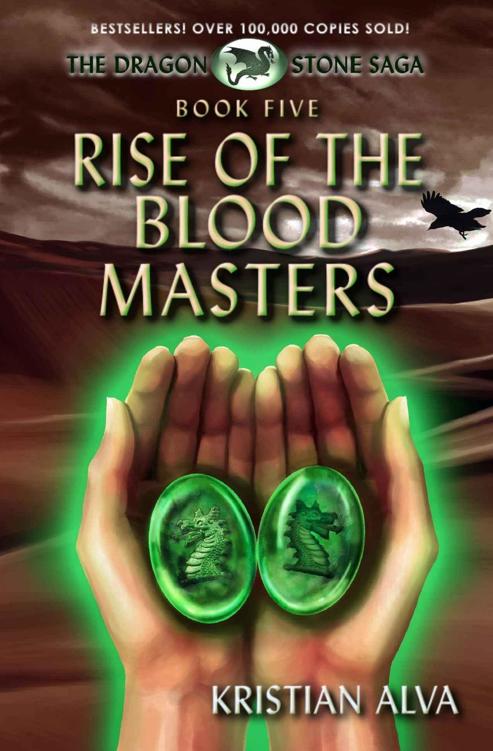 Rise of the Blood Masters

This book contains material protected under International and Federal copyright laws and treaties. Any unauthorized reprint or use of this material is prohibited. No part of this book may be reproduced or transmitted without express written permission from the publisher. Cover illustration: Stephanie Payne Denne

Find out more about the author at her official website:
www.KristianAlva.com

Printed in the United States of America.
The Dragon Stone Saga
® is a registered U.S. trademark. All rights reserved.

The Return to the Elder Willow

The Oath of Enemies

Rise of the Blood Masters: Book Five of the Dragon Stone Saga

Book 2: The Return of the Dragon Riders

Book 5: Rise of the Blood Masters

Book 8: The Fall of Miklagard (forthcoming) 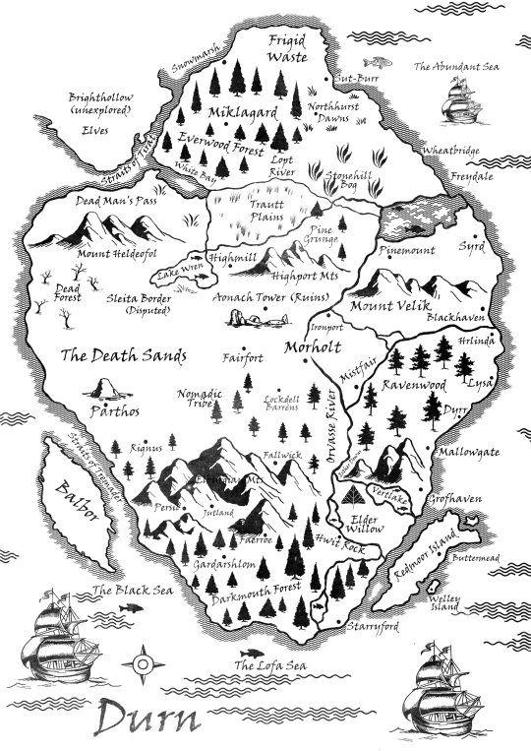 The Return to the Elder Willow

Tallin and Mugla kept their conversation light as they returned to the Elder Willow. They talked about the weather and other trivial things. Mugla tried several times to start a dialogue with her nephew, but few words passed between them.

Every time the conversation turned serious, Tallin would find a way to change the subject. He was preoccupied throughout the trip and never regained a peaceful state of mind.

Whenever Tallin stopped to hunt along the way, Mugla was left alone in the forest. At first, she was overcome with feelings of isolation, but eventually, she grew used to the solitude. She’d been living among the dwarves for so long that she was used to having almost no privacy. Compared to the claustrophobic, cramped quarters of the Highport caverns, the emptiness of the forest seemed vast indeed.

When the weather was clear, they slept under the stars beside a small campfire. Unfortunately, their journey was punctuated by bursts of freezing rain, and Mugla often spent the night shivering with cold. When it rained, they slept under a tree, or if they were lucky, in a cave. Still, despite their uncomfortable sleeping arrangements, Mugla never complained.

She wasn’t about to make a fuss over it, especially since she had invited herself along on this trip. Tallin hadn’t been pleased about that, but he eventually agreed.

She had insisted on coming, partly to make sure that Tallin arrived safely, but also to discover more about Tallin and his connection to Skera-Kina, the Balborite assassin who had attacked them outside the dwarf caverns.

They sat by the fire together in the evenings, talking occasionally about the assassin Skera-Kina—the woman who had tried to kill him. She was ruthless; something out of a nightmare. It usually soured the mood, so eventually Mugla stopped bringing it up altogether. Sometimes they discussed happier subjects, like the dragon’s nest. This always put Tallin and Duskeye in good spirits. Mugla’s voice broke into his thoughts.

“So how do ye think the eggs are doing?” Mugla asked.

Tallin answered with an instant smile. Tallin loved discussing the impending birth of the hatchlings. It was just the sort of distraction he needed. “I’m sure everything is fine, but I worry every minute. I can’t wait to see the nest again.” Then, absently, “I wonder if any of the eggs have hatched yet.”

“That’s unlikely,”
piped Duskeye.
“It’s still too early. Once we reach the Elder Willow, we will monitor the nest together until the hatchlings appear. Shesha is waiting for our return.”

Tallin smiled and crossed his arms behind his head. The dragon’s eggs had consumed his imagination since he saw them for the first time. Of course, the nest was more than a pleasant distraction. It was the key to the future of the dragon race. In the years leading up to the last war, the dragons were almost exterminated by the evil emperor Vosper. The dragons fled to the desert to hide. The emperor was eventually defeated, but very few dragons survived the war, and there had been little hope for their survival since.

Only a handful of nesting females remained, and the chance that any of them would successfully spawn a clutch of eggs was low. Yet, somehow, Shesha and Duskeye had mated, and produced a healthy nest. Shesha’s sudden fertility had shocked everyone. Tallin had been ecstatic about the news.

“How much longer before they hatch?” asked Mugla. She didn’t know much about dragons, for there were no dragons in the dwarf kingdom. Tallin was a dwarf
halfling.
He was the only dragon rider on the continent with dwarf blood.

“It varies a lot, but it usually takes about eleven months,” Tallin replied. “Sometimes later if the weather is cold.”

“Why, that’s nothing,” she replied. “They’ll be hatched soon.”

He shook his head. “Not soon enough for me. I won’t rest easy until they hatch. But as long as the nest is safe, then that’s really all that matters.” Tallin leaned back, and his face darkened. “Do you think Skera-Kina will come searching for us at the Elder Willow? We can’t risk her finding the nest. “

“No, I don’t think there’s any chance of that,” she responded. “It’s probably just a coincidence that she showed up at Highport while you were there. And she doesn’t know where we’re going now anyway.” She rubbed the back of his hand.

He forced a smile. “You’re probably right.” He was clearly distracted now.

“It’ll be all right. Don’t worry so much.” Mugla cleared her throat and looked away. She felt like she was lying to him, but she didn’t know what else to say.

After that, the conversation died, and for once Mugla didn’t try to revive it. She decided not to bring up the subject of Skera-Kina again.

Eventually Mugla nodded off to sleep. The next morning, they continued their journey toward the Elder Willow. The days passed by, and eventually they were near their destination. Now that they were closer, Duskeye flapped his wings and flew very fast.

Around midday, Tallin said. “I can see the top of the Elder Willow in the distance. We’ll arrive before nightfall.”

Mugla smiled. “Good. It’ll be nice to see Chua again and to get a good rest for the night. There’s somethin’ about that place that revitalizes my soul… I love the greenery and the trees. It’s such a calm place. Being there helps me think more clearly. “

Tallin smiled. “I agree. It’s pleasant here. But one has to be tranquil to appreciate it.”

Mugla squinted, looking through the trees. She could see a fire blazing in the meadow below. There was a small man covered with a blanket at the edge of the firelight. “Look, I see a cook fire.”

Tallin sniffed the air eagerly. “Did Chua make stew? Or am I so hungry I’m imagining things?”

“No, ye’re right. He’s definitely cooking something good. Mmmmm! I hope that stew tastes as good as it smells.” The aroma of stewed vegetables and spicy herbs filled the air, making their stomachs growl. As they flew closer, they saw Chua carefully stirring an iron pot that was suspended from a hook over a low fire. Mugla smiled. “We could use something hot to eat after all these cold nights.”

Duskeye flapped his wings, and they descended toward the sacred grove where Chua made his home. After one final flap, Duskeye landed right near the Elder Willow, underneath the tree’s hanging branches. Paper lanterns swung from vines that coiled up the tree’s enormous trunk. With Tallin’s help, Mugla hopped from Duskeye’s saddle.

She stretched her back, as it was stiff from riding. Then, smiling, she hobbled toward Chua, pausing next to a small wooden table with a bunch of large wildflowers on it. She plucked a single flower from the bunch, smelled it, and placed it back down. “Sunflowers are so beautiful, aren’t they?”

“Chua!” she called out. “Did you set all this up yourself? What a nice thing to do!” She planted a friendly kiss on the spellcaster’s scarred cheek. “Thanks for making such a nice effort for us.”

On the other side of the fire, Chua propped himself up on a mound of pillows. He raised his chin to greet them, saying, “Welcome, welcome. We’ve been expecting you. I’m glad you’re both here. You’re right in time for supper. I made the stew, but I can’t take credit for the rest. Starclaw hung the lanterns and set up the table of flowers. She’s a great helper, you know.”

The Second Time I Saw You: The Oxford Blue Series #2 by Pippa Croft
The Great Baby Caper by Eugenia Riley
Las minas del rey Salomón by H. Rider Haggard
Star Wars: Coruscant Nights III: Patterns of Force by Michael Reaves
The Proverbial Mr. Universe by Maria La Serra
Immortal Danger by Cynthia Eden
How Capitalism Will Save Us by Steve Forbes
Spy Out the Land by Jeremy Duns
Gasp (Visions) by Lisa McMann
The General's Virgin Slave by Georgia Fox