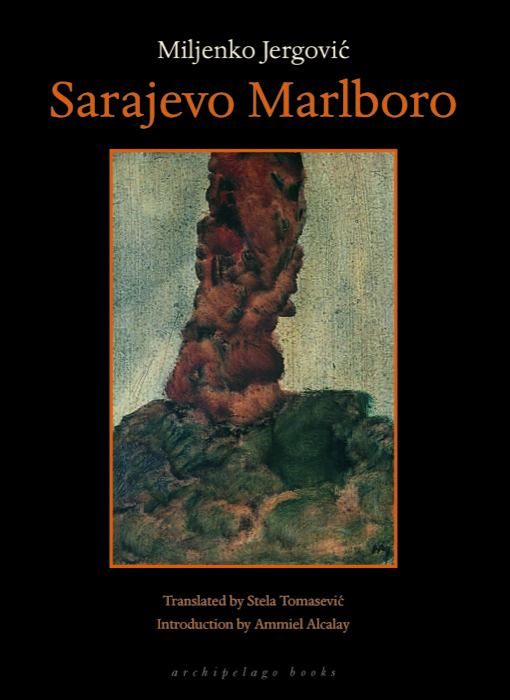 All rights reserved. No part of this book may be reproduced or transmitted in any form without the prior written permission of the publisher.

This translation first published in the UK by Penguin Books, 1997

Sarajevo Marlboro: a short story collection / by Miljenko JergoviÄ; translated from Bosnian by Stela TomaÅ¡eviÄ ; with an introduction by Ammiel Alcalay.â 1st ed.

One: Unavoidable Detail of Biography

Two: A Reconstruction of Events

Three: Who will be the Witness

The circuitous routes traveled by literary texts across various borders, checkpoints, blockades and holding pens should finally, once and for all, lay to rest the romantic notion that such texts announce themselves and arrive simply by virtue of their inherent qualities as literature. Nothing could be farther from the truth: like any commodity, literary texts gain access through channels and furrows that are prepared by other means. Fashion, chance encounters, fortuitous circumstances, surrogate functions, political alliances and cataclysmic events such as war or genocide are much more certain and constant catalysts than judgment based on actual literary history or cultural importance. The texts that manage to sneak through the policing of our monolingual borders still only provide a mere taste â fragmented, out of context â of what such works might represent in their own cultures, languages, as well as historical and political contexts. One novel or book of poems by a single writer, removed from the cluster of other writers and artists from which it has emerged, unbuttressed by correspondence, biographies or critical studies â such a work of translation in America too often functions as a means of reinforcing the assumptions behind our uniquely military/industrial/new critical approach
to the work of art as an object of contemplation rather than a call to arms, a cry for justice, an act of solidarity or a witness to history. The writer remains an individual, chosen by authorities as representative of a period or style, rather than one of many emerging from a densely textured and pluralistic scene. To fully contextualize the work of a writer like Miljenko JergoviÄ in the Sarajevo of the late 1980s and early 1990s, for example, would take the kind of grounding that American scholars have only lately begun providing for our own scenes of the 1950s and 1960s, following the trajectories of little magazines, the relationships between performance spaces, galleries, visual artists, musicians and filmmakers, as well as a broad and specific account of social and political history.

The story of America's relationship to a country like Yugoslavia, or the country that once was Yugoslavia, and the instrumental uses its successor states have been put to in more recent political debate, might begin to provide a context for considering the magnitude of our distance from the subject. While the US-led NATO attack on Yugoslavia has become the rubicon liberals need to cross in order to announce their support of “just” wars, the actual history and circumstances of American and European acquiescence in the genocidal attack against Bosnia is no longer pronounced anywhere. Like documents ordered under the Freedom of Information Act that are censored differently for each separate request, such disappearance represents only one layer of historical amnesia. In the 1970s, Yugoslavia
represented the non-aligned movement, the third way between the Eastern block and the West. The works of Milovan Djilas circulated widely among left-leaning American intellectuals, while Yugoslavia's geopolitical role in the world remained largely unexamined. Oddly enough, many coming of age in Yugoslavia in the late 1960s and 1970s who were not involved in the turbulent debates and nationalist politics of those years, succumbed, in a kind of intellectual surrender, to the illusion of stability created by Tito. Fed by heroic imagery of the partisans, stable to the point of amnesia, and possessed with an urbane irony regarding “truths” of any kind, this generation grew up curiously uninformed by a political consciousness. It is almost as if only the pomp, ceremony and cynical opportunism of the Non-Aligned Movement, with none of the real hope for change it engendered, had come to rest in the unconscious ideology of a whole generation.

Oblivious to this mental and political terrain, some of the more adventurous foreigners might have traversed the Adriatic coast and crossed a mountain range or two, in search of the folklore that, less than 20 years later, would provide the background music to genocide. American readers would have heard of Ivo AndriÄ, winner of the 1961 Nobel Prize for Literature, and maybe even read his
Bridge on the River Drina,
a text that would be misquoted most egregiously by well-meaning souls supporting Bosnia during the war of the 1990s. In another era, as the mortar in the Berlin wall began to be chipped away,
Danilo KiÅ¡ would be championed as a dissident, a writer placed in the kind of potentially precarious and very public position some of our more prominent intellectuals kind of wished upon themselves, without really knowing what such a stance might entail. The films of DuÅ¡an Makavejev and later Emir Kusturica, without having much or, indeed, any relationship to each other, would blend, in the western viewer's mind, into a drunken Balkan melange of mayhem, satire and sex â exotic indeed, but still apparently accessible. From 1981 to 1989, the same period that saw the Israeli invasion of Lebanon and the first Palestinian uprising, close to 600,000 Kosovars â half the adult population â were arrested, interrogated, interned or reprimanded by Serbian authorities; the future president of Bosnia, Alija IzetbegoviÄ, was put on trial (in 1983), along with 13 others, and charged with “hostile and counter-revolutionary acts derived from Muslim nationalism,” despite the fact that, as the historian Noel Malcolm notes, the Yugoslav state's deeper fear seemed to derive from IzetbegoviÄ's
then
unequivocal advocacy of “Western-style parliamentary democracy.”

During this turbulent period, journalism and literature played an enormous role. On the one hand, people whose mouths had been shut during Tito's reign began rewriting the history of Yugoslavia through articles and interviews in widely circulated magazines; on the other hand, the Serbian Academy of Letters, its novelists and poets in particular, began manufacturing apocalyptic narratives and imagery to accompany MiloÅ¡eviÄ's very conscious designs to create the
Greater Serbia. As a translator in those years, I found it impossible to interest editors in literature from Bosnia. It was only after the war, when Bosnia became “known,” that projects I had attempted to initiate could be carried out. But as Bosnia became known, the implications of European and American acquiescence in the cantonization (along ethnic and religious lines), of the democratically elected, multinational and pluralistic state government of Bosnia-Herzegovina, were completely internalized and made to seem like a logical outcome of the actions of people very unlike “us.” These experiences, and many others to follow, taught me a lot about our own structures of thought, and the domestic borders we inherit and police.

Given my own involvement in Middle Eastern politics and culture â another region dominated by mythological projections â I intuited certain similarities and patterns to this willful ignorance and reticence. This was embodied by what the Slovenian theorist Slavoj Å½iÅ¾ek has called “postmodern” racism, a climate in which “Apartheid is legitimized as the ultimate form of anti-racism, as an endeavor to prevent racial tensions and conflicts.” Å½iÅ¾ek goes on to write: “In former Yugoslavia, we are lost not because of our primitive dreams and myths preventing us from speaking the enlightened language of Europe, but because we pay in flesh the price for being the stuff the Other's dreams are made of. . . . Far from being the Other of Europe, former Yugoslavia was rather Europe itself in its Otherness, the screen onto which Europe projected its own repressed reverse. . . . Against today's
journalistic commonplace about the Balkans as the madhouse of thriving nationalisms where rational rules of behavior are suspended, one must point out again and again that the moves of every political agent in former Yugoslavia, reprehensible as they may be, are totally rational within the goals they want to attain â the only exception, the only truly irrational factor in it, is the gaze of the West, babbling about archaic ethnic passions.” (
Why Bosnia?
eds. Rabia Ali and Lawrence Lifschultz)

This is the political and public world that Miljenko JergoviÄ found himself an inhabitant of â born in Sarajevo in 1966, JergoviÄ's literary career began early. Poet, prose writer, novelist, and journalist, JergoviÄ represented a very different approach to writing and public engagement than had been the case in Tito's time. The Bosnian poet Semezdin MehmedinoviÄ, six years older than JergoviÄ and an editor at one of Sarajevo's most important literary journals, describes the cultural scene of the 1980s there in the following terms: “There was a great interest in comic book art, rock music and film, that's what me and my generation educated ourselves on. The same sources motivated artists, musicians, writers, photographers and performers â and this produced a common aesthetic.” One of the unique features of this common aesthetic, and one that has perhaps made facets of the culture of this period difficult to transfer out of its milieu, is the fact that it was produced right at the cusp of the full global assault of mass culture and consolidation of media outlets and access. At the same time,
there is an operative intuition in this aesthetic pointing to precisely what may be coming up ahead. Because of this, the work emerging from Sarajevo during this period operates under its own conditions, without adhering to any dominant aesthetic practice or ideology coming from Europe or America. The war, if anything, heightened these conditions, at least for its duration.

Crashing Into You
The Bad Twin by Shelia Goss
Highland Awakening by Jennifer Haymore
The Secret Wedding Dress by Roz Denny Fox
Something Wicked This Way Comes by Ray Bradbury
Mitch by Kathi S. Barton
Forgiveness and Second Chances by Ancelli
Christmas With You by Tracey Alvarez
Seeker by Jack McDevitt
What Happens in Tuscany... by T A Williams