Read Schwerpunkt: From D-Day to the Fall of the Third Reich Online

Schwerpunkt: From D-Day to the Fall of the Third Reich 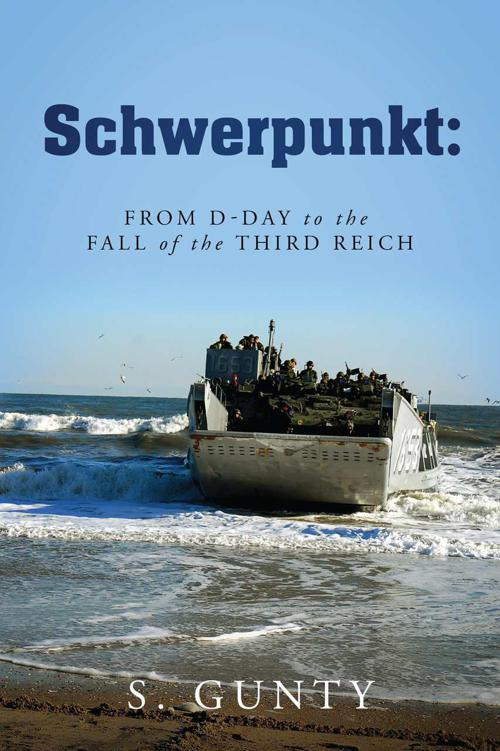 This is a work of fiction. The events and characters described herein are imaginary and are not intended to refer to specific places or living persons. The opinions expressed in this manuscript are solely the opinions of the author and do not represent the opinions or thoughts of the publisher. The author has represented and warranted full ownership and/or legal right to publish all the materials in this book.

Schwerpunkt:
From D-Day to the Fall of the Third Reich
All Rights Reserved.
Copyright © 2015 S. Gunty
v3.0

4. Rommel Has Something to Say About An Invasion

7. Facing the Invaders on the Coast

12. August and the Allieds Are Out Of Normandy

13. August and the Germans Have Lost Normandy

17. The Allieds Escape a Bulge

18. Crossing The Rhine And Winning The War

Everyone knows that World War II ended with an Allied victory, but exactly how the defeat of Hitler’s thousand year Third Reich came about may not be as familiar.
In Schwerpunkt: From D-Dday to the Fall of the Third Reich
, chronological chapters follow the Allieds’ march across Europe and are told from both the Allied and German perspective. Frank Greathouse, an Allied soldier, and Rudi Katzenmeier, a soldier of the Third Reich, tell the story.

Frank works as a planner on General Eisenhower’s staff at the Supreme Headquarters, Allied Expeditionary Force (SHAEF) and tells the historically accurate story of how DDay was launched and what went into its preparation. Frank’s counterpart Rudi, works under General Erwin Rommel and describes how faithful and initially enthusiastic German soldiers, who were fighting for the honor and redemption of their Fatherland, reacted in the face of escalating battles that could not be won. Having access to the top planners and commanders of the war in Europe gives Frank and Rudi the credibility to recount what the plans were and how the key battles that literally saved the world played out. Letters to Frank from his brother and his cousin lend a personal investment to these battles. Rudi writes to and receives letters from his mother and aunt who describe home life in war time Germany. Woven into the story of the actual battles are some of the more tangential and little known elements of World War II. Frank tells how the Americans violated the Geneva Convention when they captured a German U-Boat and its two Enigma Machines the day before DDay and discusses Operation Fortitude, the plan to keep the Germans guessing where the real Schwerpunkt, i.e. the real striking point of the enemy invasion, would take place. Rudi tells how General Rommel went about arming and defending the beaches and Airborne landing zones with as many deadly impediments as possible, even inventing some of his own. He relates what the Germans saw and how they reacted to the invasion, especially since most of their generals were away on War Games or weren’t in Normandy given the weather and their assumption that no invasion could take place until July, 1944. Rommel’s implication in the plot to assassinate Hitler and his forced suicide by the Nazis are presented and at this point in the story, Rudi is transferred to the front line unit and tells the rest of the story of how and where the Germans fought from his perspective as a “Landser,” a German Infantryman.

Schwerpunkt
is necessarily a work of fiction. There never would have been a person like Frank who was privy to the greatest and most extraordinarily guarded secrets of WWII: Operation Fortitude, the Enigma Machines and the Ultra decrypts. Rudi would never have dared to write what he did were he a real soldier in Hitler’s Wehrmacht Army. Neither Frank’s nor Rudi’s position existed in his army and there were clearly no such people who knew so much about what happened contemporaneously with the unfolding events. So while it is a work of fiction, it is one heavily researched for dates, personnel and the facts of what happened during the battles described. These parts are as true as my research could make them.

Finally, some of the generals running WWII had personalities bigger than life. Much has been written on all of them and I’ve tried not to stay neutral on any of them. Some I like. Some I don’t. Although there is a basis in fact for everything I’ve written about them, I don’t necessarily expect everyone to agree with my viewpoint. Write your own book...

The World as We Know It

On September 1, 1939 Germany, under the authority of Chancellor Adolph Hitler and his Nationalsozialistische Deutsche Arbeiterpartei (Nazi Party) invaded Poland and two days later, France and Britain declared war on Germany. On April 9, 1940 Germany invaded Norway and Denmark and one month later on May 10th, Germany began its invasion of France, Belgium and Holland. The fighting between Germany and Britain in France lasted less than 4 weeks. After the 1940 disaster at Dunkirk, where soldiers from the British Expeditionary Force just barely escaped from France in every kind of boat made available, the defense of France could hold out no longer. Ten days later, on June 14, 1940, the Germans entered Paris and a week after that, France signed an Armistice with Germany that allowed the Germans to remain in much of France, including the Normandy Coast. Continuously, from June, 1940 until June, 1944, the Germans occupied France. Isolated raids took place in that time period but France and indeed Continental Europe remained solidly in German hands.

By February, 1941 Germany set its sights on Africa, Greece and Jugoslavia. On June 22, 1941 Hitler ordered his troops to invade Russia under Operation Barbarossa. By the end of 1942 America and her allies fought against the Germans in French North Africa and by mid 1943, they invaded Sicily to fight them in Italy.

The Germans began building defensive positions along the northern coast of France in 1942 and this Atlantic Wall provided all the protection the Germans felt they needed to protect Festung Europa, their European Fortress. This would change but not until late 1943 when Hitler knew an Allied invasion would be launched. But he didn’t know where and he didn’t know when.

It was a dark and stormy night. No, really, it was a dark and stormy night which started as a dark and stormy day earlier that afternoon. This night was so dark and so stormy that the eyes of a President, a Prime Minister, hundreds of assorted generals, and tens of thousands of men kept alternating between the heavens and the rain lashing at their walls. Each was willing the storm to stop, some by praying, some by puking off the sides of their boats or into their helmets in airplanes, some by sleeping and some by just sheer will of personality. “Goddamn this rain!” was heard in more than one venue and on more than one occasion. I even said it myself several times because this rain and the brewing storm on the coasts of England and France on the night of June 4, 1944 had the power to affect the entire world. But for this goddamn tempest, 170,000 men from around what remained of the free world would have been landing in France and invading Hitler’s Fortress Europa. And before there was the night of June 4
th
, there were plenty of other days and nights leading up to it. And almost all of them involved Dwight David Eisenhower. I’m Frank Greathouse and I work under General Eisenhower at SHAEF, the Supreme Headquarters, Allied Expeditionary Force. Since that is a supreme mouthful, we call ourselves the “Allieds.”

General Eisenhower, a West Point graduate, was taken under the wing of General Douglas MacArthur when he worked at MacArthur’s headquarters as his Chief of Staff. Ike learned much about the art of soldiering during his early years…what to do and what not to do, if I know General MacArthur. Ike left the United States War College in 1928, after the Great War ended but before this one started. He had been stationed in the Philippines and from how I heard him talk, he loved it there. Having served in the Philippines, he naturally came to the attention of General George Marshall after the Jap bastards raked Pearl Harbor on December 7, 1941. As President Roosevelt’s Chief of Staff, General Marshall wanted Ike’s perspective on the Far East since he had spent so much time there. Ike put something together and apparently impressed Marshall by his ideas of what to do with the Philippines in the face of a likely Jap attack on those islands. After meeting with General Marshall on just a couple of occasions, Ike was sent to work in General Marshall’s Office in Washington where he served, I guess, as an assistant to the Assistant Secretary of War, though his real title was something like Head of the War Plans Commission.