See You in Hell (Mel Goes to Hell Series Book 2) 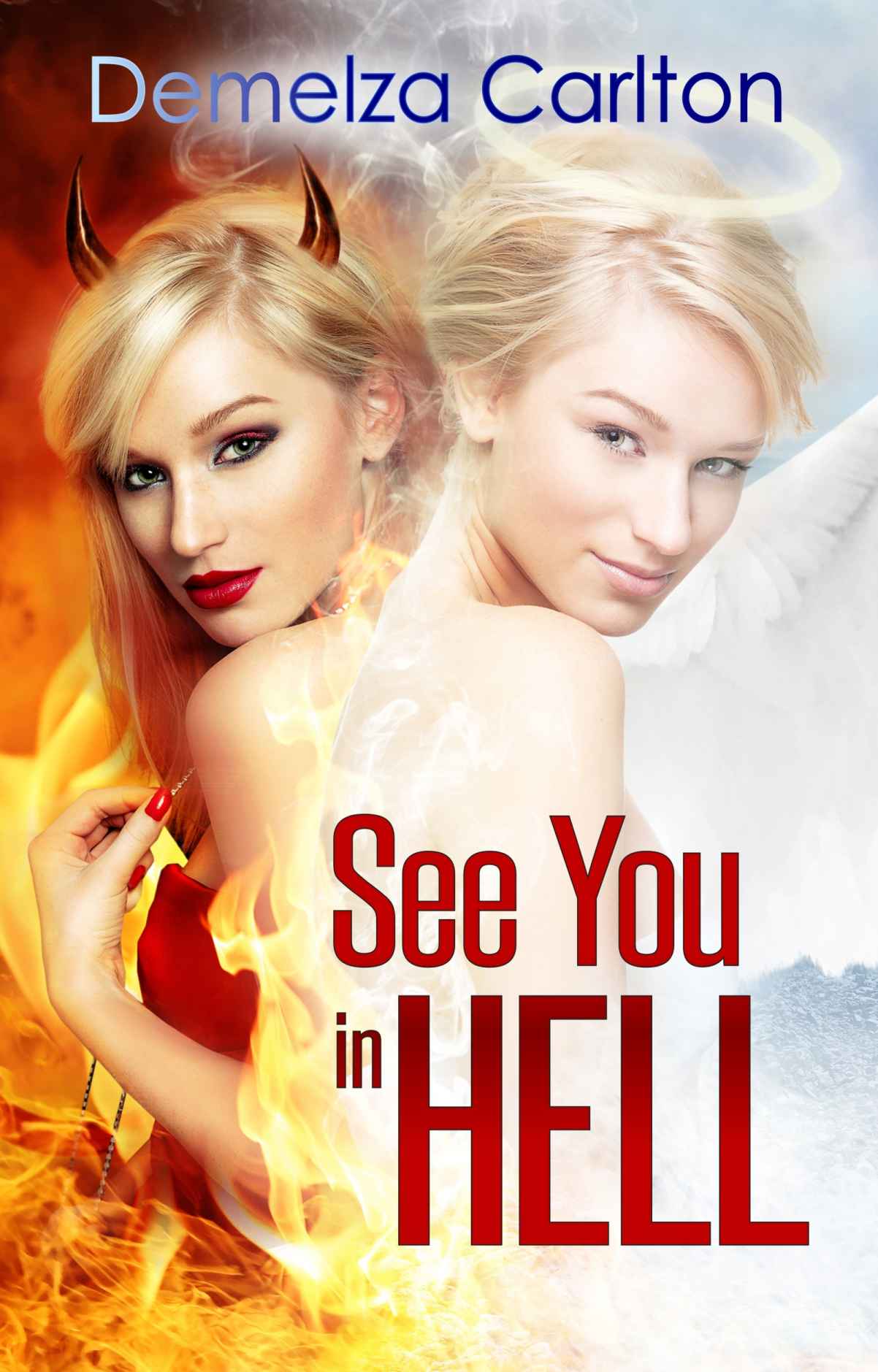 Sometimes you need to be an angel to get through a work day.

I've been lucky enough to work beside them instead.

For all those helpful angels who helped inspire this book and unleash it on the world.

This one's for you.

"Congratulations on your new job. We'll see you in HELL at nine on Monday morning."

They ended the call and Mel dropped her phone on the bench. Despite Raphael's confidence, she knew this would be her most difficult assignment yet. No angel had ever taken on the Pit and won. Every other angel had failed, corrupted into joining the demons' ranks. She wasn't just the best – she was the only one left. And she didn't have a thing to wear to work.

Maybe if she ironed some of her clean washing, something would look good. After all, it wasn't like she had to wear pristine whites like she did in Heaven.

"See you in HELL," she murmured, plugging in the iron.

Mel walked into the HELL Corporation building and took the lift up to the sixth floor. To her surprise, today's receptionist was a man. "Welcome to HELL. Can I help you?" he asked with a smile. He raised his eyebrows.

The receptionist's eyebrows lifted even higher. "I'll get her for you." He paused. "Yes, I have your angel. Did you want to come get her?"

For a moment, Mel thought he was talking to her, then noticed his almost invisible headset. Embarrassed, she looked out the window at the Christmas decorations in the foyer. It looked like someone had picked up some props leftover from the
Avatar
set and decided to use them for Christmas. In October.

A door opened and Lilith appeared, wearing a red pantsuit, an absent smile on her face. "Hi again, Mel. Call me Lili." She offered her hand and Mel took it. It was so cold and limp, she felt like she was shaking a chicken breast.

"Follow me," Lili said, swiping her card over the reader and opening the nearest door.

Lili led Mel through a maze in burgundy cubicle land. She stopped at one that looked no different to the others and gestured for Mel to take a red guest chair. Lili seated herself behind the desk, on an ergonomic chair that was just a bit higher than Mel's.

"Right, then. Here's all your pre-orientation training and checklists –" Lili pushed a thick folder of papers across the desk, "– and your login codes – you'll need to change the default password right away –" a single sheet of paper landed on the folder, "– and your desk is next to mine." Lili pointed over the partition to the cubicle next door, between the fire exit and a huge, concrete, structural pole. She smiled at Mel one more time before her eyes slid to her computer monitor in dismissal.

Mel stood and took a step toward her cubicle. "Ah, Lili, you never said what I'm supposed to do here."

Lili lifted her eyes. "First, finish your orientation, then we'll discuss tasks. You're an executive officer, which means you execute orders for anyone in the unit."

Mel looked down at the papers. "So I'll find out next week?"

Lili laughed. "You'll be done with that by the end of tomorrow. Read through the package today and tomorrow you'll be in the group orientation sessions in the training room. Most of the stuff is about safety – what to do if there's a fire. As if we'd ever have fires in HELL!"

Mel had been welcomed to HELL exactly six times since she'd arrived, ninety-two minutes earlier. The presentations had been so enthusiastically delivered that she'd checked her watch thirty-one times and tallied every welcome in her otherwise blank notes.

She felt like making a coffee, just to break the monotony, and it looked like the demons in the room all felt the same way. Two were playing poker, one was watching some sort of video on his phone, one was snoring slightly as she slept on the desk, and the remaining half-dozen demons looked like they weren't far off joining her.

The sleazy, coffee-spilling demon Mel remembered from her interview stepped in front of the projector.

"May I be the first to welcome you to the HELL Corporation," Luce began.

Mel carefully tallied a seventh mark on her page.

"I look forward to working closely with all of you, as we rise from our humble beginnings…"

Hell hardly had a reputation for humility, Mel thought idly. If Luce was a good example of the demon denizens of the place, arrogant beginnings seemed more appropriate. She glanced around at the other demons in the room, for she was definitely the only angel present. They all looked awake and somewhat attentive – or at least their eyes were open and facing front. Cards and phones had vanished.

As Luce droned on, pausing occasionally to deliver one false smile after another, she started to see the patterns. All the demons followed his words, laughing and smiling with him, as if they were afraid to even appear like they weren't listening. It wasn't so much loyalty as blind obedience, or fear. She began to understand precisely what she was facing – a united army who would serve their leader. A man who knew exactly what he controlled. She wondered whether they were quite as sycophantic when he wasn't around.

Her fellow orientees looked more human than the demons who'd interviewed her. There wasn't a tail in sight and they all had very human-looking skin tones. She had seen the occasional vestigial horn, hidden amongst hair, but she'd seen newborn goats with bigger horns. She'd had so little to do with demons in the past that she had no idea if their horn size and human appearance made them extremely junior or senior demons. She turned her attention to their leader, presumably the most senior demon.

"I'm sure it won't be long before the next time someone says, 'See you in Hell!' you'll wonder what department they work in and why you haven't seen them in the lunchroom here at work." Luce's teeth seemed perfect and white as he laughed loudly, joined soon after by his demon chorus.

Luce looked entirely human, Mel decided. Not a horn, hoof or tail out of place. Perfectly manicured nails that didn't make her think of claws. Yet no one could smile that much while their eyes remained soulless, black holes of hate – only a man who'd seen Hell every day for millennia and maintained his sanity. She had no doubts at all. This was clearly the Lord of Hell, she realised, as those dark eyes settled on her.

Mel shivered a little in her seat, in sympathy for how cold the man seemed. Was it the distance from Hell that made him so chilly, like some kind of fiery lizard? How horrible it must be to live such an emotionless existence – no happiness, joy or fellow feeling for anyone. She wondered how a man filled with such cold indifference could seduce so many angels to fall. All she felt for him was sadness. The danger Raphael spoke of seemed distant – she needed to know what this man planned and running off to Raphael right away wasn't going to get anyone anywhere. She needed to stay and observe for as long as she could.

"So, once again, welcome to HELL!" he boomed, with one last practised smile.

Mel regretted that she'd missed his speech while letting her mind wander, but the emotionless tone he'd used had made the words sound like he'd memorised them long before and not varied them much since. She vaguely remembered seeing a letter from the CEO in her notes yesterday – she'd probably already read the content of his presentation. The saccharine message hadn't improved any in his personal delivery.

"And now, we break for fifteen minutes to refresh and have a coffee!" the demon trainer called out. "Fifteen minutes on the dot!"

Mel slipped out to the kitchen so she could finally have a drink. Demons were known for their slavish devotion to Earthly pleasures – surely the rich, dark brew of office coffee would be one of those.

Mel carefully blew on her coffee as she returned to the lunchroom turned training room.

Luce reclined against the tiny bar in the corner, resting his arms on it so his hips were pushed into greater prominence.

Mel recognised his stance as one meant to draw attention to the bulge in his pants. The implied message was clear: the pants could be unzipped for the right girl or boy, if someone played their cards right. Mel had far more experience with such a stance than Luce probably realised – for she remembered a time in Russia when it had merely meant the man was rich enough to own a spare pair of socks to stuff in his pants against the frostbiting cold. Ah, Napoleon had been stubborn and arrogant, too, she recalled, but he'd been good for intelligent conversation. He'd also owned an ample supply of socks.

No one seemed game to speak to the CEO, so Mel took pity on him. Resting her elbow on the end of the bar, she asked, "Do you get bored, delivering the same orientation presentation every month?"

Mel laughed heartily. "That sounds like a rehearsed response if ever I heard one. Do you ever answer a question honestly?"