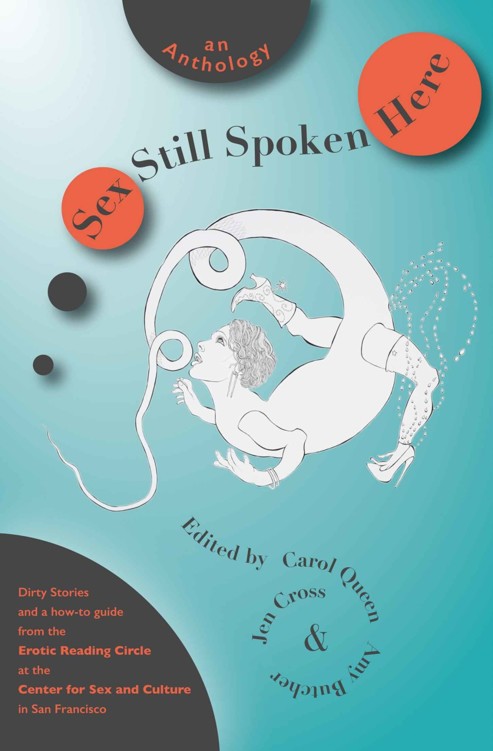 Published by Center for Sex & Culture Press at Kindle Direct

All stories copyright 2014 by their individual authors

All rights reserved. Except for brief passages quoted in newspaper, magazine, radio, online, or television reviews, no part of this book may be reproduced in any form or by any means, electronic or mechanical, including photocopying or recording, or by information storage or retrieval system, without permission in writing from the publisher.

Letter
to
My
Girlfriend
• Marlene Hoeber

Back
in
the
Saddle
• Erin M.

The
Spirit
of
the
O’Farrell
• Simone Corday

Poems
:
Life
Is
Good
When
You’re
Getting
Fucked
,

Mirror
in
the
Machine
• Carol Queen

About the Center for Sex & Culture

I began to write in middle school. I journaled every single night when I was a pup, only stopping that daily practice when I went to college. But even there I wrote and wrote, now when the spirit moved me––and it moved me often, because a youth can always talk to herself, even when she doesn’t have others to talk to. I filled book upon book with hand-written musings, analyzing and describing everything around me, everything that was troubling or inspiring or new. If you are not keeping a journal, my friend, please do––it is such an extraordinary gift to yourself, to take your own life so seriously that you make a book out of it, even if it’s only for your own eyes … even if you never re-read it after you fill the pages. Years later I realized I had been writing the story of myself
for
myself, giving my older self a set of notes to help me make sense of my younger self, scattering breadcrumbs through a forest that, some days, was very dark and trackless.

Now I know I was also teaching myself to write. I never had a formal writing class, aside from those compulsory ones in high school. I didn’t get an MFA, didn’t apprentice to some amazing mentor, didn’t go to Iowa or anywhere else. I just wrote, and read, and wrote, and the scritching of my pen all alone in rooms, or surrounded by the comforting buzz of cafes, comprises a great deal of how I built my future.

I’m telling you––pick up a pen.

Since it was
my
journal, there was a lot of sex in it, and that’s what started me on the path of becoming a sex writer. (Even when there wasn’t any actual sex being had, there was yearning for and thinking about it, the next best thing.) Once, on a BART train the week after the Loma Prieta earthquake had knocked down part of the Bay Area’s freeway system, I sat my journal, in which I had been writing about (what else?) another night with Robert, down on the seat where I’d been writing, and gaped out the window––so struck by the damage was I that I left the train without it, and was so bereft that my raw document of new love and heady fucking was gone forever that I vowed I would go get hypnotized so that I could retrieve it, word for word.

(The guy who picked it up went to pretty extreme lengths to find me and return it. He left his card; he was a filmmaker, and to this day I keep an eye out in case the story of my life surprises me on Netflix.)

We never know when a new person comes in the door what they’ll read when they pull out their folded manuscript or their laptop. We cannot predict by looking at a person’s apparent gender, age, station in life (and all of these are
only
appearances, after all––you cannot judge a book by its cover, nor the person who has written it), can’t assume what fantasy or experience has flowered from their pen or their blinking cursor. It is the most beautiful opportunity to be reminded of the diverse experiences and identities of the humans around us, but also of their unbounded erotic imaginations. We spend much time in the sex-positive world decrying the role of shame and lack of information––but people find workarounds, and when they sit down to write, no matter where they came from, they may dive into surprisingly deep waters.