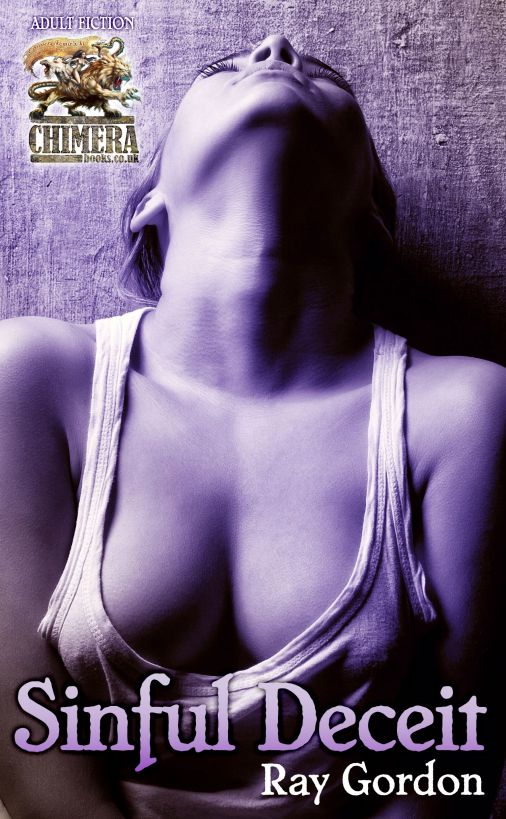 Sinful Deceit
first published in 2000 by Hodder & Stoughton. Published as an
eBook in 2013 by Chimera eBooks.

Chimera (
ki-mir'a,
ki-
) a creation of the imagination, a wild
fantasy.

New authors
are always
welcome, or if you’re already a published author and have existing
work, the eBook rights of which remain with or have reverted to
you, we would love to
hear from you
.

This work is sold subject to the condition
that it shall not, by way of trade or otherwise, be lent, resold,
hired out or otherwise circulated without the publisher's prior
written consent in any form of binding or cover other than that in
which it is published, and without a similar condition being
imposed on the subsequent purchaser. The author asserts that all
characters depicted in this work of fiction are eighteen years of
age or older, and that all characters and situations are entirely
imaginary and bear no relation to any real person or actual
happening.

Copyright Ray
Gordon. The right of Ray Gordon to be identified as author of this
book has been asserted in accordance with section 77 and 78 of the
Copyrights Designs and Patents Act 1988.

This novel is
fiction - in real life practice safe sex.

When I was
young I'd frolic in the garden. In my angelic innocence I'd sit
cross-legged or roll about on the lawn. People would visit. Aunts
and uncles, friends and neighbours. They'd sit on the patio sipping
tea. My mother would flutter among them with a plate of biscuits.
She was a butterfly. While the visitors spoke of their adult world
they'd keep watch over me, watch me play. I was safe, secure.
Crossed-legged on the lawn I made daisy chains beneath the summer
sun. I was pure in my innocence. I loved the grass, the flowers. I
was a small flower. The garden seemed big. Sometimes my best friend
Sharon would come round and we'd play in the garden together.

But with the
passing of time, things changed.

We were by a
river. He slipped my knickers down, pulled them off my feet. My
thighs were spread, my sex crack open. The fleecy down of my blonde
pubes glistened beneath the summer sun. I felt the hardness of his
penis entering my vagina. Penetrating me, impaling my quivering
body. He breathed heavily, his hot breath on my flushed face.
Oblivious to the deflowering, the birds sang in the trees. David
stripped me of my virginity, took me across the threshold to
womanhood. He'd been gentle. My needs had been fulfilled before
his.

Men looked at
me in the street, their eyes burning into my breasts, my thighs,
the rounded swell of my firm buttocks. David became possessive and
jealous. He'd complain bitterly if I as much as returned another
man's look, reflected a smile. In his jealousy, he slowly drove a
wedge between us. His resentfulness distanced me. Sex with David
finally became cold and loveless. An act lasting a few minutes once
a week. His needs were fulfilled before mine.

As the weeks
passed, David and I met for a drink on the odd occasion. He wanted
me back. But I felt that he'd stifle me, cage me as a bird. He was
persuasive, talked of his undying love for me. I finally agreed. We
were boyfriend and girlfriend again. I didn't want to be a
girlfriend. I had a candle friend. The hard shaft of David's cock
entered me eagerly, his sperm filled me willingly with gushing
spurts. I thought he was with me for love, but I was wrong. I was
there for his cock. My body was for his pleasure, his shafting, his
sperming. But I was to fly away. The door to my cage was to
unexpectedly open. My life was to change. A changing I'd never
thought possible.

"Kirsty!" my mother called. "You're going to be late for
work." I bounded downstairs, buttoning my blouse as I entered the
kitchen. The familiar aroma of tea and toast filled my nostrils.
The radio was on. The disc jockey talked of road works, traffic
hold-ups. A letter lay on my plate. Unknown handwriting. A foreign
stamp. By air mail.
Par
avion
.

"Aren't you going to open it?" my mother asked. I caught her
blue eyes. Enquiring, seeking. questioning. "It's from Greece," she
said with a hint of excitement. Sitting, I drew my chair up to the
table and opened the letter. The handwriting was small and neat.
Tidy.
Dear Kirsty
.
My eyes fell to the bottom of the page.
Love from Uncle Jack
. Had he watched
me play in the garden? He would have seen my crack as I'd sat
cross-legged.

"Who's Uncle
Jack?" I asked my mother as she dropped two slices of white bread
into the toaster. I preferred brown. She turned and looked at me,
her eyes searching again, questioning. "The letter," I said. "It's
from Uncle Jack."

She cocked her
head to one side. "I've not heard of him," she finally replied.
"There again, we have so many relations scattered around the world
that..."

Her words drifted above my head unheard as I read the
letter.
I've been trying to trace John, my
brother. And guess what? I came up with your name and address. I
didn't know I had a niece. I doubt very much that you've heard of
me as your father and I were parted when we were very young. I know
nothing about you and would like to meet you. A photograph would be
nice. Write and tell me about yourself
.

"So he might
be a relation from the Australian side," my mother continued.

"He's father's
brother," I murmured abstractly. I never knew my father. "I didn't
know he had a brother."

"Neither did
I," she sighed, placing two slices of toast on my plate. "He never
talked about his family. When he died... Come on, Kirsty, you're
going to be late."

I slipped the
letter back into the envelope and ate my toast. Butter that wasn't
butter and thick-shredded marmalade containing more sugar than
fruit. I hurriedly drank my tea. There was no time for cereals. I
was going to be late. I should have got up earlier. Had I not
comforted myself with my candle friend... My panties were wetting
with my girl juice. My bud craved the gentle caress of my
fingertips.

David had
phoned the day before and invited me to dinner at his flat that
evening. He wanted me to be his penis friend. I didn't want to go.
I'd rather have settled on my bed with my fingers and my candle. I
knew that I should go to David's, but I didn't know why. Why do we
do things we don't want to? Birds and butterflies do as they
like.

My work bored
me, the computer screen hypnotized me. I thought of Uncle Jack,
imagined him living beneath the Greek sun. He'd be bronzed with
silver-grey hair. He'd drink wine and eat olives, feta cheese salad
tossed in virgin olive oil. He'd swim every day in the
crystal-clear waters of the Mediterranean. He was an artist,
painting the dark faces of Greek girls framed by their jet-black
hair. My imagination ran away with me.

I arrived at
David's flat and scrutinized him. His face was pale, drawn. He was
wintery England, not summery Mediterranean. He had clean, slender
fingers that had worked in a office for too long. He was
twenty-eight. Twenty-eight years of nothingness. Why had he never
been abroad? Too busy working in an office to live. Did he want to
swim in the clear waters of the Mediterranean? He offered me
Martini and talked of marriage. My thoughts had flown to a
sun-soaked, sandy beach in Greece.

"But we'll
have to wait until we're married," David smiled. I hadn't been
listening to him. Married? Was Uncle Jack married? "Looks like my
promotion is on," David said. He grinned as he brushed his dark
hair back with his fingers. "The money will come in handy for when
we buy a house." I looked down at my thighs. A suntan would be
nice, water running over my bronzed skin as I emerged from the
Mediterranean in my bikini.

"We'll have to
move to London, of course," he said as a matter of fact. "Once I'm
head of sales, we'll have to live in London." I was taken for
granted. He hadn't noticed my new dress. Short, revealing. Red,
alluring. I was an object to be moved to London. The men would pack
me in the back of the van with the three piece suite. My feelings
and desires didn't come into the plan, his plan. I desired my
candle friend. "I realize that property is expensive in London, but
you won't need to work," he said, refilling my glass. "I thought
we'd have two children. Have them early so we can..." His words
were meaningless. My future with David didn't exist. Two children,
the patter of tiny feet.

"I had a
letter from my Uncle Jack," I interrupted him, sipping my Martini.
I would have preferred Greek wine.

"Who's he?"
David asked, screwing his face up. He looked retarded. "You've
never mentioned him before."

"I didn't know
that he existed."

Finishing my drink, I wandered into the dining room as David
went to the kitchen. He'd laid the glass-topped table. I hate
glass-topped tables with chromed tubular legs. Place mats, knives
and forks, glasses, two candles... No flowers. Cold, uninviting,
formal. But the candles intrigued me. Long, thin, tapering. My
candle friend was thicker, masculine. It had...
he
had become curved over the years,
curved for close-fitting comfort. My panties wetted with my juices
of desire as I thought of climbing into my bed. My candle friend
beckoned. My vagina pined for him. My clitoris stirred impatiently
beneath its pink bonnet.

"Chilli con
carne," David announced proudly as he walked into the room and set
a plate before me.

He sat
opposite me and began to eat. "Yes," he said, briefly looking up
from his food as one would look up from a book. "You wore it to
Ian's party."

I'd only
bought it that afternoon. "That's right," I smiled. Did he know the
colour of my hair?

After the
meal, we sat in the lounge. David settled beside me on the sofa,
his groping hands wandering up my inner thighs. He wanted my girl
crack. My girl crack wanted my candle. I sighed, looked about the
room and talked of mundane things. The room was mundane, as was the
background music. Some tuneless classical piece that filled the
room with an air of sullenness. Perhaps the sullenness came from
me. David's fingers persisted between my thighs, his cock rising
beneath his tight trousers. Making my excuses, I left. I couldn't
face the heaving and grunting and panting of David on top of me.
His pale face grimacing, his penis pistoning, his sperm flowing...
Lust, not love.

Another letter arrived from Uncle Jack the following week. I
should have written to him. I don't know why I'd not got round to
it.
Kirsty, I've had an idea. Why don't you
come and stay with me for a couple of weeks? I have a lovely villa
on an island. We could get to know each other. Bring a friend, if
you wish
. The following day, a plane ticket
arrived. Gatwick to Athens.
I'll meet you
at Athens Airport
. I couldn't take the time
off work. I had nothing to wear. I had no spending money...
Standing naked before the mirror in my bedroom, I admired the
gentle curves of my femininity. A suntan would be nice.

"Why not?" my
mother said as she fluttered about the kitchen. "I'd not miss an
opportunity like that if I were you. You could take David."

"You're
eighteen, Kirsty. Enjoy yourself while you're young. You've never
been abroad, and neither has David."