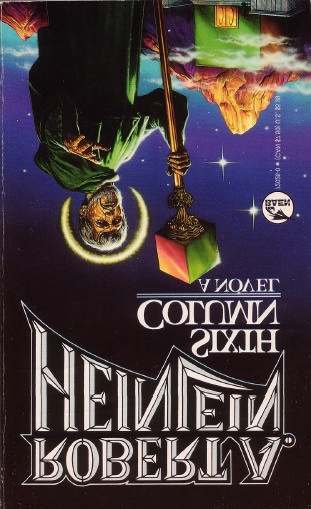 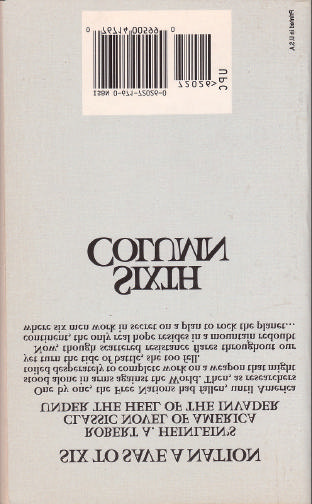 thoroughly enslaved, a picture of a nation as helpless as a man completely

paralyzed, its defenses destroyed, its communications entirely in the hands

Everywhere he found boiling resentment, a fierce willingness to fight

against the tyranny, but it was undirected, uncoordinated, and, in any modern

sense, unarmed. Sporadic rebellion was as futile as the scurrying of ants

whose hill has been violated. PanAsians could be killed, yes, and there were

men willing to shoot on sight, even in the face of the certainty of their own

deaths. But their hands were bound by the greater certainty of brutal multiple

retaliation against their own kind. As with the Jews in Germany before the

final blackout in Europe, bravery was not enough, for one act of violence

against the tyrants would be paid for by other men, women, and children at

This is a work of fiction. All the characters and events portrayed in this

book are fictional, and any resemblance to real people or incidents is purely

Reprinted from Astounding Science Fiction, (c) 1941 by Street and Smith

All rights reserved, including the right to reproduce this book or portions

thereof in any form.

Distributed by SIMON & SCHUSTER 1230 Avenue of the Americas New

"What the hell goes on here?" Whitey Ardmore demanded.

television receiver said, "Shut up. We're listening," and turned up the volume.

The announcer's voice blared out: "-Washington destroyed completely before

the government could escape. With Manhattan in ruins, that leaves no-"

There was a click as the receiver was turned off. "That's that," said the

man near it. "The United States is washed up." Then he added, "Anybody got

Getting no answer, he pushed his way out of the small circle gathered

by a table. It was not too easy, as rigor mortis had set in, but he finally

located a half-empty pack, from which he removed a cigarette and lighted it.

The man with the cigarette looked him over for the first time. "Who are

"Ardmore, major, intelligence. Who are you?"

"Very well, Colonel-I have an urgent message for your commanding

officer. Will you please have someone tell him that I am here and see to it

that I am taken to him?" He spoke with poorly controlled exasperation.

Calhoun shook his head. "Can't do it. He's dead." He seemed to derive

some sort of twisted pleasure from the announcement.

"That's right-dead. They're all dead, all the rest. You see before you, my

dear Major, all that are left of the personnel of the Citadel-perhaps I should

say of the emergency research laboratory, department of defense, this being

in the nature of an official report." He smiled with half his face, while his eye

took in the handful of living men in the room.

Ardmore took a moment to comprehend the statement, then inquired,

"No. No, not the PanAsians. So far as I know, the enemy does not

suspect the existence of the Citadel. No, we did it ourselves-an experiment

that worked too well. Dr. Ledbetter was engaged in research in an attempt to

discover a means of-"

"Never mind that, Colonel. Whom does command revert to? I've got to

carry out my orders. "

to think about that yet. Wait a moment."

His eye roved around the room, counting noses. "Hm-m-m-I'm senior to

everyone here-and they are all here. I

suppose that makes me commanding officer."

"No. All special commissions. That leaves me it. Go ahead with your

Ardmore looked about at the faces of the half a dozen men in the room.

They were following the conversation with apathetic interest. Ardmore

worried to himself before replying over how to phrase the message. The

situation had changed; perhaps he should not deliver it at all.

"I was ordered," he said, picking his words, "to inform your general that

he was released from superior command. He was to operate independently

and prosecute the war against the invader according to his own judgment.

You see," he went on, "when I left Washington twelve hours ago we knew

they had us. This concentration of brain power in the Citadel was about the

Calhoun nodded. "I see. A defunct government sends orders to a defunct

laboratory. Zero plus zero equals zero. It's all very funny if one only knew

"They are your orders now. What do you propose to do with them?"

"Do with them? What the hell is there to do? Six men against four

hundred million. I suppose," he added "to make everything nice and tidy for

for everybody left and kiss 'em good-by. I don't know where that leaves meharakiri, perhaps. Maybe you don't get it. This is all the United States there is

left. And it's left because the PanAsians haven't found it."

Ardmore wet his lips. "Apparently I did not clearly convey the order. The

order was to take charge, and prosecute the war!"

He measured Calhoun before answering. "It is not actually your

responsibility. Under the changed situation, in accordance with the articles of

war, as senior line officer present I am assuming command of this

detachment of the United States army!"

It hung in the balance for twenty heartbeats. At last Calhoun stood up

and attempted to square his stooped shoulders. "You are perfectly correct,

sir. What are your orders?"

"What are your orders?" he asked himself. Think fast, Ardmore, you big

Junk, you've shot off your face-now where are you? Calhoun was right when

he asked "With what?"-yet he could not stand still and see the remnant of

You've got to tell 'em something, and it's got to be good; at least good

enough to hold 'em until you think of something better. Stall, brother, stall! "I

think we had best examine the new situation here, first. Colonel, will you

big table? That will be convenient."

"Certainly, sir." The others, having heard the order, moved toward the

table. "Graham! And you, what's your name? Thomas, isn't it? You two

remove Captain MacAllister's body to some other place. Put him in the

again to Calhoun. "You had better introduce me to those here present. I want

to know what they do and something about them, as well as their names."

It was a corporal's guard, a forlorn remnant. He had expected to find,

Mountains, the most magnificent aggregation of research brains ever

gathered together for one purpose. Even in the face of complete military

disaster to the regular forces of the United States, there remained a

enemy and equipped with every modern facility for research, might

conceivably perfect and operate some weapon that would eventually drive

he was on his own, no longer responsible to higher authority. But what could

half a dozen men do in any case?

For it was a scant half a dozen. There was Dr. Lowell Calhoun,

mathematician, jerked out of university life by the exigencies of war and

called a colonel. There was Dr. Randall Brooks, biologist and bio-chemist,

with a special commission of major. Ardmore liked his looks; he was quiet

and mild, but gave the impression of an untroubled strength of character

superior to that of a more extroverted man-he would do, and his advice would

Ardmore mentally dubbed Robert Wilkie a "punk kid." He was young and

looked younger, having an overgrown collie-dog clumsiness, and hair that

would not stay in place. His field, it developed, was radiation, and the

attendant branches of physics too esoteric for a layman to understand.

in his specialty. He might be a genius, but his appearance did not encourage

No other scientist remained. There were three enlisted men: Herman

Scheer, technical sergeant. He had been a mechanic, a die maker, a tool

maker. When the army picked him up he had been making precision

instruments for the laboratories of the Edison Trust. His brown, square hands

and lean fingers backed up his account of himself. His lined, set face and

back in a tight place. He would do.

officers' cook. Total war had turned him from his profession as an artist and

interior decorator to his one other talent, cooking. Ardmore was unable to see

how he could fit into the job, except, of course, that somebody had to cook.

none. "He wandered in here one day," explained Calhoun. "We had to enlist

him and keep him here to protect the secret of the place."