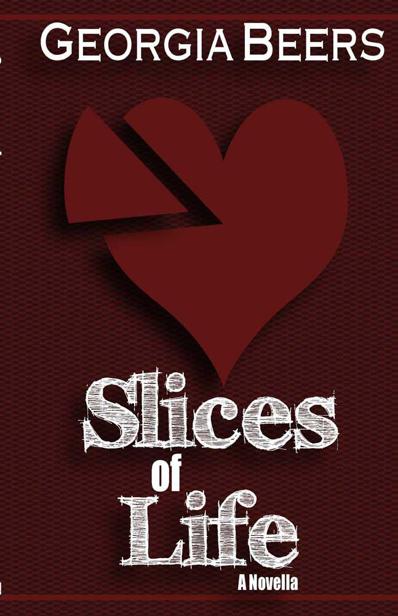 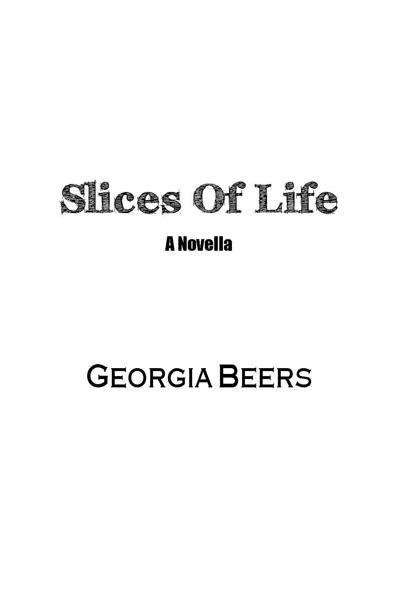 This is a work of fiction. Names, characters, places, and incidents are the product of the author’s imagination or are used fictitiously. any resemblance to actual persons, living or dead, business establishments, events, or locales is entirely coincidental.

This book, or parts thereof, may not be reproduced in any form without permission from the author or the publisher.

When I started writing this novella, I made the mistake of thinking that a collection of short stories would be easier to write than a novel, that it would zip along quickly. Oh, how wrong I was! Jumping in and out of the lives of eleven different characters was infinitely more difficult than I expected. So, as you can imagine, this book is a bit of a departure from my usual work, and I appreciate the patience and encouragement all of you showed. My readers are the best. I hope I don’t let you down.

Thank you to Susan and Carrie at Brisk Press for being the easiest, most laid-back people on the planet to work with. When I told them this was going to end up being a novella rather than a full-length novel, they didn’t bat an eye. They just said, “Okay, let’s do it.” And just like that, you’re reading it.

One of the biggest mistakes an author can make—in my opinion—is to think she has nothing left to learn about her craft. Linda Lorenzo edited this book with a gentle hand, explaining each correction to me in detail, helping me to understand and learn to make the proper changes to my work. I was a good English student in school, and in my forties, I’m still learning. For that, I am eternally grateful.

My dearest friend, Steff Obkirchner, never ceases to amaze me with her artistic abilities. Not only is she my most amazing proofreader (or Queen Nitpicker, as I like to call her), but she also designed both the cover and the trailer for this collection. I owe her big.

I’ve never been a part of a writers group before. I never wanted to be. I always thought having a group of people evaluate my work would do nothing but depress me, so I avoided it. But since my group started meeting a year ago, I realize how wonderful and important it is to spend time with like-minded people. So thank you to my Cool Chicks: Joy, Nancy, Tracy, Jess, and Karin. Your support means everything.

Finally, but never last, my Bonnie. I am not the easiest person to be partners with (hard to believe, I know). I can be selfish, moody, insecure, solitary, and just difficult in general. But Bonnie knows all of this about me, understands it all, and she loves me anyway. Becoming instant parents to a teenager is enough to throw anyone’s life into chaos, and ours was no different. In the process, we’ve found some interesting things out about ourselves and each other—both good and bad. We’ve argued. We’ve disagreed on how to handle things. We’ve had moments of bliss when we’ve realized we did something exactly right. It’s been an emotional rollercoaster, but through it all, we’ve tried our best to stand together, and I think we’re doing a damn good job. Thank you, my love, not only for your unconditional support of my career, but for sticking with me through the good and the bad, the annoying and the awesome, the heartache and the elation. I know I don’t always make it easy, but I’m so glad to have you standing solidly by my side, holding my hand. I love you.

“Ms. Buckner,” she said absently to Jenna as she retrieved her messages from the little turnstile on the counter. “Good morning.”

“We’ve got Sal Farelli and his crew coming in at nine thirty. Please make sure we have fresh coffee and pastries in the conference room before then.”

Davis didn’t look up from the pink message slips in her hand as she headed down the hall toward her enormous and expensively appointed corner office. Jenna’s eyes followed her retreat, glued to the gentle swaying of slim hips and the sharp cut of a set of calf muscles that were very, very well acquainted with a bicycle.

“God help me,” she muttered under her breath.

“God thinks you’re a hopeless case.” Roberta McKenzie—Bertie to most—shared the Davis and Fichter, Attorneys-at-Law front-desk area with Jenna. She locked her purse in the bottom drawer, set a medium double-double coffee from Tim Horton’s in front of Jenna, then plopped into her chair, donned her headset, and patted her carrot-top hair into place. She sipped from her own cup before she continued. “How many times do I have to remind you that lusting after your boss gets you nowhere? Hmm?”

“Were you this stubborn in grade school too?”

“Okay, let’s try again.” Bertie ticked off her points on her fingers. “It’s inappropriate, for starters.”

“Secondly, it distracts you from your work.”

Jenna furrowed her brow. “You think so? I might have to disagree with that one.” She was totally playing with Bertie now.

“All right. How about the fact that she’s taken.” Jenna made a face and gave a dismissive wave. Bertie glared for a second, then went on. “Oh, yeah, and there’s the whole thing about it being
inappropriate
.”

Jenna laughed at that. “But have you
seen
her?”

“I have. She does nothing for me.”

It was Bertie’s turn to laugh as she clicked open her e-mail. “Seriously, hon. You can look, but you can’t touch.”

“Yes, Oh Wise One,” Jenna said, as if she hadn’t already touched. As if she hadn’t been touching every Tuesday and Thursday night for the past two months. As if Christine Davis’s head wasn’t snug between Jenna’s thighs a mere eight hours ago. She glanced at Bertie, half-expecting her to see the aura of guilt that must surround Jenna’s entire form. What color was guilt anyway? Black? Red? But Bertie continued on with her e-mail and Jenna was apparently aura-less.

Nobody knew. Nobody. Not Jenna’s best friend, Michelle. Not her parents. Nobody at the office. Not a soul. Christine wanted it that way, said it was safer. Jenna was too preoccupied with the mind-blowing sex to stop and ask the obvious question: Safer for whom?

Mind-blowing. That wasn’t even a strong enough description. Earth-shattering, maybe? Limb-melting? Jenna hated to think of herself as the kind of person who had a one-track mind, but when she was alone with Christine, her hormones went whacky. All she could think about was stripping her clothes off and letting Christine have her way with her body. All other coherent thought seemed to flee from her brain.

Christine Davis wasn’t conventionally pretty. She was actually rather plain, with the exception of her eyes. Her straight, brown hair was cut simply in a short, practical bob which she tucked behind her ears by habit. Her skin was clear and smooth and generally devoid of makeup. But her eyes were ice blue, such a light shade that they almost seemed clear, at times nearly transparent. When Christine Davis looked directly at you, she could make you squirm purely because of the color of her eyes.

But it wasn’t really her physical appearance that entranced Jenna. It was her poise. Her confidence. The certainty that she would get whatever she wanted whenever she wanted it. Jenna imagined that there wasn’t a lot in life Christine Davis longed for, and she’d found herself attracted to her from almost the minute she was hired over a year ago.

At some point last month, Christine decided she wanted Jenna. To Jenna, it was unclear what changed, what made her boss suddenly look at her differently. But it didn’t take much for Christine to convince Jenna their pairing was a good idea. One late night at work, one glass of wine too many, one soul-searing kiss. That was all it took; Jenna was on her back on the leather couch in Christine’s office in no time, her skirt hiked up around her hips, her panties dangling from one ankle, and her boss’s fingers deep inside her. She wasn’t sure if it was the risk of being in the workplace while the cleaning staff was still there, having sex with the woman she’d lusted over for months and months, or having Christine’s hand clamped over her mouth to muffle her cries, but Jenna came harder than she ever had before. It was the most massive, spine-sizzling orgasm of her life; she was completely useless afterward. Her limbs felt like Jell-O, her vision was blurred, and she couldn’t feel her feet.

“My, my. That was
nice
.” Christine kissed her gently on the mouth, then the forehead, before extracting herself from their tangle and standing up.

All Jenna could do was nod and watch as Christine straightened her blouse and stepped back into her shoes.

“Thank you for indulging me. Maybe we can do it again?”

It wasn’t really a question and Jenna didn’t stop to analyze the thank you. Her eyes closed, she simply gave another nod.

“’Kay.” Jenna took the hand Christine held out and let her pull her to her feet. There wasn’t much talking after that. They packed up their things and rode the elevator down to the lobby of the building together. Christine said goodnight, that she’d see Jenna in the morning, and that was that.

Until the next time, less than a week later.

After that, it became their routine. By their third time, the discussion of keeping the situation just between the two of them came up, and before Jenna could think clearly, she’d become, for all intents and purposes, Christine’s little concubine.

She would have been disgusted with herself if the sex wasn’t so goddamn good. At least, that’s how she felt in the beginning.

The phone on her desk rang, snapping her back to the present.

“Davis and Fichter. How may I help you?” Jenna absently wondered how many times a day she said those words. Dozens, at the very least.

Jenna’s stomach roiled and her coffee suddenly felt like acid.
Why did she always have to be so nice? Why couldn’t she just be a bitch?
These thoughts raced through her head every time Christine’s partner of over a decade called, every time she asked Jenna about her life or her family. Jules was a sweetheart. Jenna hated her for that.

At The Stroke Of Midnight by Bethany Sefchick
An Elegant Death: A Short Story by Camilla Lackberg
The Insiders by Rosemary Rogers
A Trick of the Moon by Melinda Barron
A Balance Broken (Dragonsoul Saga) by Hartke, J.T.
Stirred by J.A. Konrath, Blake Crouch
A Coffin Full Of Dollars by Joe Millard
Above Us Only Sky by Michele Young-Stone
The Sins of Scripture by John Shelby Spong
Celtic Bride by Margo Maguire