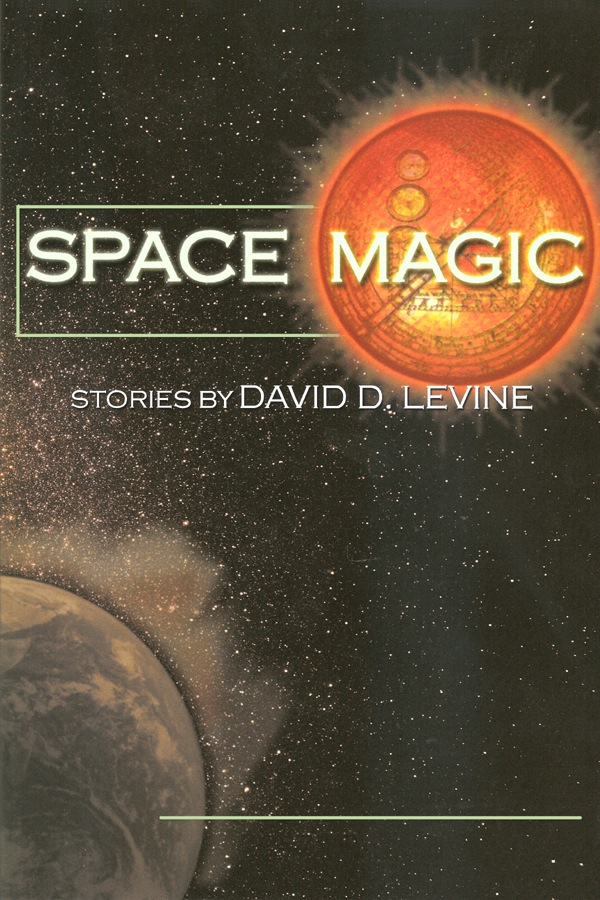 Short story collections are notoriously hard to sell, particularly for a writer whose name is not already well known, even if the stories that make up the book are really good and have won awards. Hence the need for an introduction. The publisher hopes that at least a few readers who don’t know David Levine’s name will have heard of Bruce Holland Rogers and will read the introduction to see what I have to say. My job is to snag those readers in the book store (Buy this book!) or the library (Borrow this book!) thanks to my name and my enthusiasm for Mr. Levine’s stories.

By all means, do!

I suggest that you begin with the story with the least pronounceable title, “Tk’Tk’Tk.” Members of the World Science Fiction Convention for 2006, meeting in Anaheim, California, voted it the best English-language science-fiction short story of the year, adding Levine’s name to an impressive list of past winners such as Neil Gaiman, Mike Resnick, Michael Swanwick, and Connie Willis. “Tk’Tk’Tk” is the story of a salesman who is trying to work what must be the least promising sales territory in the galaxy, and his frustration at dealing with the complex customs and language of his prospective clients will remind some readers of classic alien encounters such as Jack Vance’s “The Moon Moth.” It’s not just the aliens and their wonderful money that make this story memorable, though. “Tk’Tk’Tk” comes to an apt yet surprising ending.

So, average book browser, off you go! There’s nothing to see here. Go read that story!

Now, for the compulsive who has to read every word of a book, and in order, let me see if I can tempt you into giving up that practice here and now. If I couldn’t get you to go read “Tk’Tk’Tk” immediately, maybe I can tempt you with “Love in the Balance,” a story set in a city floating in the sky, where the chief mode of transportation is zeppelins.

Or how about a teen love story, a contemporary fantasy with a lovely twist or two? “Falling off the Unicorn” is where the Western Quarter Horse Association national horse show meets Faerie, complete with stage mothers and snippy pre-teen competitors. It is likely to be the only story you ever read where one character is described as “a barracuda in a double-A bra.”

Instead of continuing with this introduction, wouldn’t you rather read a story about a man whose father has decided to become a dog? Or the story about a junk yard where things that never existed in this universe are scattered among the broken washing machines, rusting away? How about a fairy story written from an ecological perspective? Or a story demonstrating what it’s like to live inside a comic book as one of its characters? Go read the stories!

Yet here you still are, in spite of my best efforts.

I might as well tell you, then, that it is a particular pleasure for me to introduce this collection because I had the honor of buying Levine’s story “Wind From a Dying Star” years ago when I was editing an original anthology. It was his first sale. I’m sure that selling the story made him very happy, but finding his story made me very happy, too. Every writer should spend some time in the editor’s chair, learning how many hopeless manuscripts come in response to a call for submissions, discovering for himself what it feels like, while reading one mediocre first page after another, to read a first page that pulls him right in and transports him. I knew from the first lines of this story that I was in good hands, and I’m pleased to say that I still like “Wind From a Dying Star,” from first words to last, as much as I did years ago.

One of the best things about writing short stories instead of novels is that no one cares if you cross or blend genres, writing heroic fantasy, contemporary fantasy, science fiction, or expressionism. Novelists are expected to specialize. Short story writers can work in a variety of different traditions, as Levine demonstrates.

As much as Levine’s work is varied, it also demonstrates a consistency. This is science fiction and fantasy where they have come to be written in the post-industrial age. The borders between the genres have blurred, and the agenda has changed. At one time, science fiction was propelled by the dream of humanity’s leap into interstellar space. I grew up thinking that I might have a life among the stars. The goal of humanity was, I once thought, to spread ourselves beyond this ball of dirt circling this one sun.

Increasingly, the dreams of science fiction have bumped against the realities of the physical world. Gravity wells are deep. The biosphere is a web that supports us but also, like a spider web, holds us. We are this little ball of dirt. It’s likely that the only planet humans will ever know is this one. Although science fiction is the literature of what is possible, much of what is possible is also highly unlikely.

For many readers and writers, science fiction has changed from being a brochure for the future to being, like fairy tales, another way of telling stories that engage our imaginations with a purely invented reality, an exclusively literary reality. Some readers who first encountered science fiction when I did look at our current realities and despair. Where are our moon colonies? Our flying cars? Our terraformed Mars? We thought SF was more than just art.

But writers like David Levine remind us that we can still go to flying cities, the far reaches of deep space, and planets inhabited by exceedingly polite chitinous aliens. Better yet, our destinations don’t have to be limited by what’s actually possible or can be made by science-fictional sleight of hand to seem possible. We can go to a present time that’s only a little different from the time we know, one populated with creatures of myth or with 1950s model-year nuclear cars. Outer space or faerie, an alternate medieval China or a haunted 1930s America, we can visit right now.

The author gratefully acknowledges everyone who has helped to make these stories possible, including but not limited to: the staff and students of Clarion West class of 2000 (especially Patrick Weekes, Pat Murphy, and Candas Jane Dorsey), the members of the Lucky Lab Rats critique group (especially Sara Mueller, M.K. Hobson, and John C. Bunnell), the editors who bought them (especially Gordon Van Gelder, Gardner Dozois, Deborah Layne, and Bruce Holland Rogers—who not only bought my very first story, he also wrote the Introduction), and all the fans and writers who have offered their support and encouragement over the years (especially Jay Lake, Karen Berry, Paul Wrigley, and Debbie Cross). But first and fundamentally, this my first published book is dedicated to Kate Yule—my love, my flying partner, and my best friend forever.

Additional Acknowledements for the Electronic Edition

Many thanks are extended to the members of Book View Café for assistance and impetus in transforming this book into an ebook, especially Chaz Brenchley for proofreading and Chinese transliteration, Dave Smeds for work on the cover, and Vonda N. McIntyre for much help and advice on the ebook transformation. Also to Darin Bradley and Bruce Holland Rogers for selflessly donating the e-rights to their work on the print book, and of course to Deborah Layne for publishing it in the first place.

Wind from a Dying Star

Gunai seethed with sorrow and rage as she helped to prepare Kula’s corpse for its final journey.

Kula had always delighted in her body, its warm and golden glow, the way it flowed into a thousand useful and expressive shapes. She had explored the universe with its senses and reached out with its fields. Now it was nothing but a senseless lump of flesh and brain and polymer, a cold mockery of what she had been. Kula the person was gone. Taken by a wolf.

The torn and ravaged corpse floated between Gunai and Old John, barely visible in the dim starlight. The other members of the tribe were gathered in a sphere around them, their glowing forms held in angular shapes of grief as Old John spoke the words of Kula’s eulogy.

More than Kula’s life had been lost in the attack. Kula had carried a child, conceived at their recent meeting with the tribe of Yeoshi. Gone now, along with whatever fraction of the father’s memories it had carried. Even Kula’s intuition, one of the best in the tribe, was gone. A compound tragedy.

“We mourn and remember Kula,” Old John concluded. “For as long as we remember her, in a very real way she still lives.”

“We mourn and remember Kula,” they all said, and paused for silent reflection.

Unwillingly, Gunai’s mind returned to the moment when Kula’s screams had been their first notice. She blamed herself. Kula should not have strayed so far from the tribe, she knew; Enaji and Huss should have kept a better lookout; Yaeri should have called a warning. But Gunai, as tribe leader, was ultimately responsible. She should have recognized the danger, should have prevented it somehow. That knowledge pained her, burned from the inside like the hunger that chewed at her belly.

Old John caught Gunai’s attention. His form did not show emotion like a normal person’s; it was fixed in an archaic five-lobed shape. But through long acquaintance Gunai had learned to read his attitudes and intentions. Without a word, Gunai and Old John grasped Kula’s body with their fields and accelerated it toward the nearest star.

The cold and lifeless thing quickly faded from view—just another bit of dark matter in a cooling universe. The tribe stared after it long after it had vanished, then gathered together in a group embrace of sorrow and reassurance. They held each other for a long time, but eventually, one by one, they drifted away to forage for food. Not even grief was stronger than hunger.

Gunai made sure all four lookouts were at their stations before she allowed herself to begin foraging.

After a time she found a small patch of zeren. She spread across it, taking a little solace from its sparkling sweetness. “Zero-point energy” was what Old John called it, but to Gunai and the rest of her tribe it was zeren, delicious and rare. Gunai recalled a time when zeren was something you could almost ignore—a constant crackling thrum beneath the surface of perception—but now there were just a few thin patches here and there. These days the tribe subsisted mostly on a thin diet of starlight, and even that was growing cold. Soon they would be forced to move on again. Yeoshi had told her the foraging was better in the direction of the galactic core, but it was so far...

Romance: Assistant to the Billionaire by Cooper, Jodi
Guys on Top by Darien Cox
The King's Mistress by Terri Brisbin
Indian Fairy Tales by Joseph Jacobs
The Chronicles of Lumineia: Book 01 - Elseerian by Ben Hale
The Red Road by Denise Mina
The Twelfth Imam by Joel C.Rosenberg
No More Mr. Nice Guy by Jennifer Greene
Awake by Natasha Preston
The Black Death in London by Sloane, Barney