Zhenya kept the existence of the letter secret for two decades and spoke to her son, Alexander, of its contents only in 1954, after Stalin’s death. She told her son that Nadya had written that she “could not live with Stalin anymore. You take him for someone else. But he is a two-faced Janus. He will step over everybody in the world, including you.” Alexander commented, “We all came to know what kind of a person Comrade Stalin was, but at the time, only Nadya knew about this.”

Zhenya asked Pavel what they should do with the letter, and he replied, “Destroy it.” The destruction of the letter and documents, of course, makes it impossible to verify the story, as is the case with so many stories about the inscrutable Stalin.

As an adult, Svetlana always believed that Nadya committed suicide because she had concluded there was no way out. How could one hide from Stalin? Svetlana’s nanny later told her of overhearing Nadya’s conversation with a female friend just days before she committed suicide. Nadya said that “everything bored her, she was sick of everything, and nothing made her happy.” “What about the children?” the friend asked incredulously. “Everything, even the children,” Nadya replied.
35
Such boredom was a sign of profound depression, but it was a painful account for her daughter to hear. Her mother had been “too bored.” Svetlana’s responses to her mother would always swing, unresolved, between sentimental idealizations and bitter anger.

Svetlana could not remember how or when she was told of her mother’s death or even who told her. She remembered the formal resting in state that began at 2:30 on November 9. The news of Nadya’s death had been shocking, and hundreds of thousands of Muscovites wanted to say good-bye to her, even though many were hearing her name for the first time. Stalin kept his family life very private.

Nadya’s open coffin rested in the assembly hall at the GUM; a huge building with atria, it housed government offices as well as the GUM department store. Irina Gogua remembered that the lines of people outside were so long that some of the uninitiated public wondered what the stores were giving away.
36
Svetlana remembered that Zina, the wife of Uncle Sergo Ordzhonikidze, took her hand and led her up to the coffin, expecting her to kiss her mother’s cold face and say good-bye. Instead she screamed and drew back.
37
That image of her mother in her coffin seared itself in her mind, never to be dislodged. She was rushed from the hall.

There are several versions of Stalin’s behavior at the ceremony. In one, he sobbed, and Vasili held his hand and said, “Don’t cry, Papa.” In another, Molotov, Polina’s husband, always recalled the image of Stalin approaching the coffin with tears running down his cheeks. “And he said so sadly, ‘I didn’t save her.’ I heard that and remembered it: ‘I didn’t save her.’ “
38
In Svetlana’s retelling, Stalin approached the casket and, suddenly incensed, shoved it, saying, “She went away as an enemy.”
39
He abruptly turned his back on the body and left. Had Svetlana herself heard this? The anecdote sounds like retrospective invective and does not seem like the observation of a six-year-old in hysterics. Perhaps this was someone else’s story.

A cortege of marching soldiers accompanied the coffin carried on a draped gun carriage covered in flowers. Vasili walked with Stalin beside Nadya’s coffin in the procession to the Novodevichy Cemetery. Svetlana was not present.

Svetlana believed her father never visited her mother’s grave. “Not even once. He couldn’t. He thought my mother had left him as his personal enemy.” Yet there were stories from Stalin’s drivers of secret nocturnal visits to Nadya’s grave site, especially during the coming war.
40 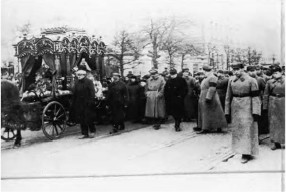 Mourners walk alongside Nadya’s coffin during the procession to Novodevichy Cemetery in November 1932. Vasili is the small boy in the front row. Svetlana was not present.

Pravda reported Nadya’s death in a perfunctory manner, without explanation. Her suicide was a state secret, though everyone in the apparat knew about it. The children, along with the public, were told another story: Nadya had died of peritonitis after an attack of appendicitis.

It would be ten years before Svetlana learned the truth about her mother’s suicide. Though this might seem astounding, it is entirely credible. The terror that Stalin had begun to spread around him particularly infected those closest to him. Who would dare tell Stalin’s daughter that her mother had committed suicide? Many would be shot simply for knowing the truth. It soon became “bad form” even to mention Nadya’s name.

Stalin was clearly shocked by Nadya’s death, but he got over it. He wrote to his mother:

I got the jam, the ginger and the
chukhcheli
[Georgian candy]. The children are very pleased and send you their thanks. I am well, so don’t worry about me. I can endure my destiny. I don’t know whether or not you need money. I’m sending you 500 rubles just in case….

Keep well dear Mother and keep your spirits up. A kiss.

P.S. The children bow to you. After Nadya’s death, my private life has been very hard, but a strong man must always be valiant.
41

But for very young children the scars caused by a parent’s death are profound, in part because death is not something their young minds can grasp; they understand only abandonment. Svetlana’s adopted brother, Artyom Sergeev, remembered Svetlana’s seventh birthday party, four months after her mother’s death. Everyone brought birthday presents. Still not sure what death meant, Svetlana asked, “What did Mommy send me from Germany?”
42
But she was afraid to sleep alone in the dark.

A childhood friend, seven-year-old Marfa Peshkova, granddaughter of the famous writer Maxim Gorky, remembered visiting Svetlana after Nadya’s death. Svetlana was playing with her dolls. There were scraps of black fabric all over the floor. She was trying to dress her dolls in the black fabric and told Marfa, “It’s Mommy’s dress. Mommy died and I want my dolls to be wearing Mommy’s dress.”
43

Chapter 3
The Hostess and the Peasant 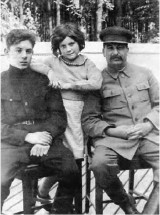 Stalin with Vasili and an eight-year-old Svetlana.

S
vetlana always divided her life into two parts: before and after her mother’s death, when her world changed utterly. Her father immediately decided to move out of the Poteshny Palace, where the shade of Nadya hovered in every corner. Nikolai Bukharin offered to swap his ground-floor apartment in
the Kremlin Senate, also known as the Yellow Palace, where Lenin had once had his private residence. Stalin accepted.

The apartment was long and narrow with vaulted ceilings and darkened rooms and had once served as an office. Svetlana hated it. The only familiar object was a photograph of Nadya at Zubalovo, wearing her beautifully embroidered shawl; Stalin had had the picture enlarged and hung in the dining room over the elaborately carved sideboard. Svetlana filled her bedroom with mementos of her mother. Stalin’s office was on the floor above, and the Politburo met in the same building.

Svetlana’s home was now full of vigilant strangers. It was run on a military model with a staff of agents of the OGPU (the secret police) who were called “service personnel” rather than servants. Svetlana felt they treated everyone but her father as nonexistent. She was sure her mother would never have allowed such an invasion, but Stalin obviously thought the quasi-military regimen of the household fitting. His children were not to be spoiled. No luxuries, no indulgences. He probably also thought the security was necessary. Enemies were about.

Even Svetlana’s beloved Zubalovo had altered. When she and Vasili returned there after their mother’s death, she was devastated to find the tree house they called “Robinson Crusoe” dismantled, and the swings gone.
1
For security reasons, the sandy roads had been covered with ugly black asphalt, and the beautiful lilacs and cherry bushes had been dug up. While the extended family still frequented Zubalovo on weekends and Grandpa Sergei lived there most of the time, Stalin seldom visited the dacha again.

Grandmother Olga continued to live in a small apartment in another building in the Kremlin. With its Caucasian rugs, its
takhta
covered with embroidered cushions, and the old chest holding photographs, Olga’s apartment was the only welcoming space in this strange new world. When Svetlana visited, she
would find her grandmother raging at the new regimen. She called the “state employees” a waste of public money. The staff retorted that she was “a fussy old freak.”
2 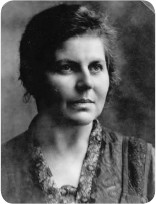 It was soon clear that Stalin had no intention of living in the Kremlin. Shortly after Nadya’s death, he had his favorite architect, Miron Merzhanov,
3
design him a new dacha in the village of Volynskoye in the district of Kuntsevo, about fifteen miles outside Moscow. He called it Blizhniaia, the “near dacha.” Stalin was said to have chosen this name for its useful vagueness in telephone conversations that might be overheard by enemies. The sixteen-room dacha, painted camouflage green, sat in the center of a forest. To approach it one had to drive down a narrow asphalt road and pass through a sixteen-foot-high fence with searchlights mounted, within which was a second barrier of barbed wire. Svetlana detested her father’s new dacha. She
said that the dacha and the Kremlin apartment continued to surface in her nightmares for decades.

By 1934, Stalin had moved to his dacha in Kuntsevo. Most evenings, he came down the stairs of the Yellow Palace to dine at the Kremlin apartment with his children. With him would be members of his inner circle, all men. Svetlana would rush to the dining room. Her father would seat her on his right. As the men talked business, she would stare up at the framed photograph of her mother over the sideboard. Her father would turn to her and ask about her school marks and sign her school daybook. This, at least, was her memory of family dinners. Though she never mentions her brother, presumably Vasili was also there and equally silent. At the end of the meal, Stalin would dismiss his children and continue his discussions with his Politburo members into the small hours of the morning. Then he would head out to Kuntsevo, where he slept. Sometimes he would come upstairs in his overcoat to give his sleeping daughter a good-night kiss.

Stalin’s departure was an elaborate ritual. There would be three identical cars with tinted blue windows waiting outside. Stalin would pick one, climb in, and move off in a cordon of guards, taking a different car and a different route each night. The traffic on the Arbat and Minskoye highways was stopped in four directions. He always waited until the last minute to tell his personal secretary, Alexander Poskrebyshev, or his bodyguard, Nikolai Vlasik, that he intended to leave for his dacha.
4