Read Still Into You Online 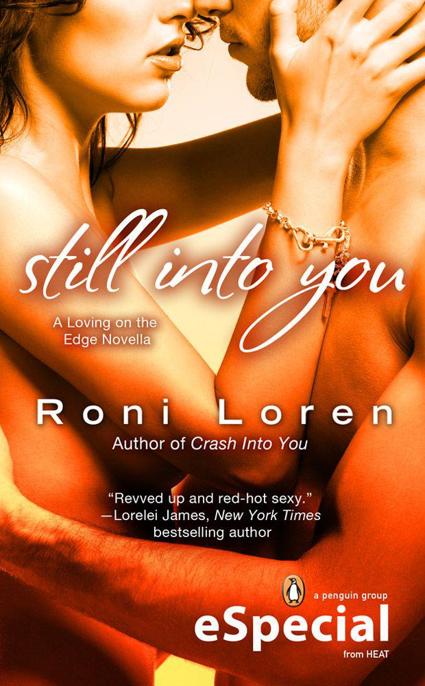 Special excerpt from
Melt Into You

This eSpecial is an original publication of The Berkley Publishing Group.

A Heat Book, published by arrangement with the author.

Excerpt from
Melt Into You
copyright © 2012 by Roni Loren.

To my grandmother, Barbara, the first of the sassy women in our family.

I miss your laugh and your lemon meringue pie
.

Seth shook his head, staring at their unmade bed. For the last few years of their marriage, he and Leila had a standing habit of making love on Wednesday nights. Not that it was a stated appointment or anything. But it was the only night he didn’t work late at the restaurant, so it had become their habit. A nice, enjoyable romp between two people who knew each other’s pleasure points as well as their own. Simple and to the point.

But last night, even though the kids were already asleep and Leila had been well-rested from a day off, she hadn’t reached for him.

And worse than that . . . he hadn’t reached for her either.

They’d chosen to watch David Letterman instead of having sex. Top Ten lists and dancing animals had been more interesting to them than each other.

With a heavy sigh, he stepped out of his cargo shorts and pulled on his work slacks. He’d wanted to bring it up with her this afternoon when he’d found her doing the dishes and staring out the window like she’d rather be anywhere but there. They needed to deal with whatever was going on—or not going on between them. But then Myra, their seven-year-old, had bounced into the kitchen asking him to check her spelling homework, and the moment had been lost.

But now the unspoken words sat heavy on his chest. Through the ups and downs of their eight years of marriage, he and Leila had been through rough times. Being unexpected parents while they were still in college had almost killed their marriage before it got started. But never before had he felt this yawning space between them. He’d thought it was because he’d been so busy with the restaurant lately. But even when they had time, like last night, they’d only sat in companionable silence, occasionally chatting about something one of the kids did that day. Comfortable but just . . . there.

He searched though his drawer looking for his general manager name tag, then remembered he’d taken it off in the bathroom. He headed to the closed bathroom door and eased it open, a cloud of steam hitting him as he entered. He started to call out to Leila to warn her he was in there. But the low moan that came from the other side of the shower curtain halted the words in his throat. He froze.

The distinct sound of soap slicking over skin mixed in with the patter of the shower water. Then a throaty
“yes”
whispered through the humid air. His body snapped to attention even though Leila getting herself off right now had implications that were anything but sexy.

But she’d chosen her hand instead of her husband.

She groaned again, and he tried to recall the last time he’d heard her sound that into it when she was with him. Who was she imagining on the other side of those touches? Clearly it wasn’t him because she could’ve had the real thing had she been willing to wait a few minutes. Maybe he was no longer as interesting as a fantasy.

She cried out softly, and he could picture her head tilted back against the tile wall, fingers buried inside herself, her orgasm pulsing through her as the water streamed over the heavy swells of her breasts. No doubt a beautiful sight. One he could stroke off to just imagining, but one that didn’t include him.

His cock pushed against the fly of his pants even as hurt coursed through him. On one hand, he was happy to know Leila’s sex drive was still there, because there had been times when he’d wondered if their lovemaking was simply an obligation she thought she needed to fulfill. But knowing that she’d chosen to get herself off instead of reaching for him stung deep.

He wasn’t satisfying his wife.

And if he was truly honest with himself, he hadn’t been satisfied for a long time either. Sex had turned into another item on their to-do list. He loved her with a depth he couldn’t describe, but the fire that used to sizzle between them was now a pile of dim embers.

The water cut off, and he took a vaulting step backward, shutting the door behind him as quickly and as quietly as he could. He hurried over to the side of the bed and busied himself making it. Leila stepped out of the bathroom a few minutes later in a swirl of coconut-soap-scented air.

“Oh, hey,” she said, her voice holding a hint of stiffness but the glow of her skin betraying the remnants of her orgasm. “I didn’t realize you’d made it back already.”

He wanted to go to her, drag her against him, and show her how much more he could offer than some quick work in the shower, but the distracted look in her eye kept him at bay. He didn’t think he could handle her pushing him away. “I just got back.”

She nodded and fastened the last button on the top of her blouse. “The kids were okay staying at your mom’s tonight?”

“Yeah, they were already negotiating for ice cream after dinner.” He tossed the throw pillows onto the bed in a haphazard way he knew probably drove his interior designer wife mad. “Is that a new outfit?”

She glanced down and smoothed the skirt. “No, I wear this one all the time. I got it on clearance last year, but it’s a size too small. If I breathe too hard, the zipper will bust.”

He frowned. She wore that all the time? How had he not noticed something that hugged her curves that well? Had it been that long since he’d really checked her out?

“Nah, you look great. I’m sure Kade Van Whatever-his-name-is will hire you on the spot.”

“Right, my ass squeezed into Spanx and a too-small skirt is a surefire plan.” She rolled her eyes as she pinned her dark auburn hair into a knot.

He hated when she did that—talked like her curvy figure was a bad thing. Since she’d had their second child, she’d taken to making those offhanded comments about her weight. And she’d damn near yelled at him the last time he’d tried to leave the lights on during sex. He took a breath, trying to formulate his approach. “Leila, is everything okay?”

What he really wanted to ask was, Are
we
okay? But he held back.

She paused, her mouth thinning for a moment before smiling. “Everything’s fine. I’m just stressed about this appointment tonight. I want to get everything right.”

Her tone was bright, but there was a clear please
-
don’t-push look in her eye.

With a silent sigh of defeat, he stepped past her to get his name badge out of the bathroom. She may not want to talk about it, but something had to give. This was no way for either of them to live. “You have any late appointments tomorrow?”

He tucked the name tag into his pants pocket, a plan taking shape in his head.

Enough of this tiptoeing around each other bull. Like his mother used to say: Talk doesn’t cook rice. There was no way he was going to stand by and let this distance between them continue to grow. If making Leila talk about it was only going to cause her to shut down more, he needed a different tactic. Something more drastic. “I’m not sure. But don’t make any plans, all right?”

He walked back into the bedroom to find her sitting on the edge of the bed. She glanced up from fastening the strap on her shoe, surprise flickering over her face before she covered the emotion. “Uh, okay.”

He smiled, relieved that she wasn’t going to grill him with questions—one benefit of knowing she was distracted by the appointment she was headed to. Feeling a dash of hope for the first time that evening, he walked over and kissed the top of her head. “Good luck with your client. I have no doubt you’ll wow him.”

“Are you going to be late tonight?” she asked, looking up at him, something akin to resignation underscoring her voice.

He frowned. He wanted to tell her no, wanted to tell her to wait up for him. But if he was going to execute this new plan, he was going to have to go on an after-work field trip tonight. One that she didn’t need to know about yet. He shifted his gaze away, plucking a lie from the air. “Yeah, it’s going to be a really late night. I have to do inventory after we close. And Rory is looking at me hard for that promotion, so I need to make sure everything is to the letter.”

She stood. “Well, I have to get up early for an appointment, so I guess I’ll see you some time tomorrow afternoon.”

Yep, they were going to see each other, all right. Hopefully in a whole new light.

All In by Molly Bryant
A Week In Hel by Pro Se Press
Indomable Angelica by Anne Golon, Serge Golon
The Time Traveler's Guide to Medieval England: A Handbook for Visitors to the Fourteenth Century by Ian Mortimer
Naughtiest Girl 2: The Naughtiest Girl Again by Enid Blyton
Her Final Breath (The Tracy Crosswhite Series Book 2) by Robert Dugoni
Valentine's Rising by E.E. Knight
Epic by Ginger Voight
The Remote Seduction by Kane, Joany
Crave by Marina Anderson