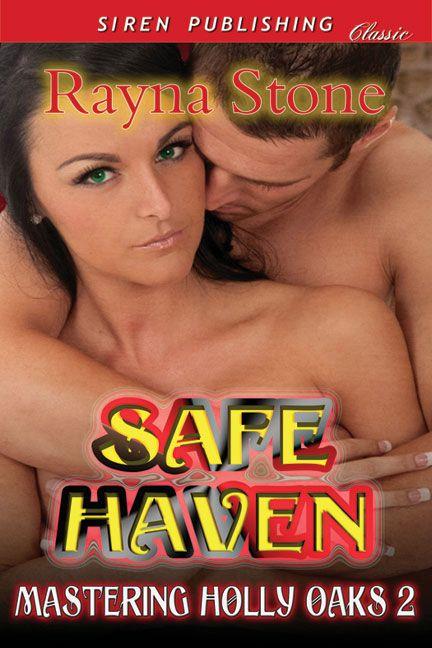 Kelly Rivers has survived brutality and abandonment in her life. Her protective barriers are strong. Once she realizes she’s ready to start living again, she knows Troy is the only man that she wants. With the help of her friends and Troy’s loving dominance, she is finally able to free herself and open her heart.

As the murderer gets closer, everyone in Holly Oaks is at risk and under suspicion. Will they find him before it’s too late?

All cover art and logo copyright © 2012 by Siren Publishing, Inc.

If you have purchased this copy of
Safe Haven
by Rayna Stone from BookStrand.com or its official distributors, thank you. Also, thank you for not sharing your copy of this book.

This is Rayna Stone’s livelihood. It’s fair and simple. Please respect Ms. Stone’s right to earn a living from her work.

To the readers. You’ll never know what it means to hear from you.

Detective Troy Davis walked into the old barn with a sinking feeling in the pit of his stomach. The owner hadn’t used this building in five years and rarely checked on it. Today when he walked into the loft, he found more than water damage and mice. The scene he described to Dispatch matched those of two other murder scenes in the Denver area. If this victim was indeed number three, Troy officially had a serial killer loose in his city.

There were no common links between the other two victims. They didn’t travel in the same social circle, nor did they have any other reason to know each other. There had to be a common thread here somewhere. This guy wasn’t picking up runaways. Until they figured out how the killer was choosing his victims, they were screwed.

This fucker was ruthless. He’d tortured and raped those girls for hours. Since the second victim suffered even more trauma than the first, Troy speculated that he was perfecting his technique, improving his ability to prolong the torture until the victim passed out from blood loss or shock. Once he could no longer get them to respond to his torture, he strangled them. Troy had studied serial killers. He knew his chances of catching this guy would dwindle with time. He would only get better, and he was pretty fucking good as it was. If he skipped town before they caught his trail, they might never find him. Their best chance right now was to figure out where these women were taken from and hope someone noticed the killer talking with them.

Once Troy climbed to the loft and peered around, he knew they were indeed looking at victim number three. And that sinking feeling got worse when he saw the killer’s new setup. A St. Andrew’s cross.
Fucking great
. A young woman was strapped to the cross, so bruised and beaten that they would likely need dental records to identify her. She had what looked to be marks from a crop or cane and a whip of some sort all over her body. Troy was an expert at the single tail. He knew you could kiss the skin or flay it from the bone. Apparently this guy just lashed the shit out of her. Once he started tearing up her skin, she wouldn’t have been able to stay conscious long. He’d have to wait for the autopsy report to verify cause of death here, but he’d bet his life this girl was strangled. He was hunting a homicidal sadist, and he may have just found his link. Like the situation wasn’t bad enough, now his entire community would be under suspicion and under the spotlight. Worse, it was likely the submissives in that community were the targets.

Morgan was asking a group of technicians about some blood spatter. “Do you really think these girls were hanging out with those freaks? Come on, Davis. They were clean-cut college graduates with nice families. What would they be doing trolling BDSM bars?” Troy could not stand the judgmental look on this prick’s face. Thankfully he wouldn’t have to work with him after the task force nailed the killer. Troy was getting out. He’d seen enough death to last a lifetime. It was time to make a change, maybe go into private security with some of his friends. He might be able to save people before it was too late.

It was judgmental people like Morgan that had Troy gravitating toward Holly Oaks more and more. He was sick and tired of people assuming his lifestyle was “freaky.” If it wasn’t for you, that was fine. But he didn’t judge other people’s choices and he didn’t hurt anyone. Assholes like this murderer gave the good members of the community a bad name. And once that community found out it might have a killer lurking in the shadows, those good members were going to go apeshit. They protected their own. He just hoped that they didn’t get hurt in the process.

Six hours of showing pictures around to every club he knew of and he finally hit pay dirt. Unfortunately, those poor girls could not have chosen a worse place to get an introduction to the lifestyle if they tried. Chains was more of a biker bar than a lifestyle club. There were no protocols to follow and no security measures in place to protect the clientele. It was, however, accessible and cheap. That was the whole damn problem. If you wanted to get into a good club like Exchanges in Holly Oaks, you had to know someone who was a member. You had to go through background checks and pay a membership fee. Most people just starting out in the scene didn’t know anyone to vouch for them, and many of the younger crowd didn’t have the money to join anyway. They ended up in places like this. Places that probably didn’t even have a house safe word, much less any way to contact members in case abuse was reported.

In Exchanges, if you wanted a mask, you had to remove it on the second floor. It could be a great intimidation tactic, though not his style, but anonymity was dangerous and not allowed unless actively scening. Why had these girls gone anywhere with a guy who wouldn’t let them see his face? He was going to have to get on the latest toxicology screen. He couldn’t imagine any young girl being reckless enough to leave the club with a stranger, no matter how desperate for the experience she may have been. If he used any of the common date rape drugs, they could have missed them with the other girls. Those drugs were hard to test for and left the system quickly. With any luck, maybe victim number three would yield some results. Troy may not know this asshole’s identity, but he had a location. That was a start. Now he just had to formulate a plan to go undercover and nail this bastard. He couldn’t risk scaring him off, so he wouldn’t be returning in detective mode. But he would definitely be returning.

Troy wanted to head over to his friend Jay’s house and run some ideas by him. Jay occasionally worked with the prosecutor in Denver and had been one of the first people to call Troy into the investigation. The first victim’s ex-boyfriend was going to go to trial for her murder, but Jay was convinced they had the wrong man. The second victim turned up before the case went forward, and since the main suspect was in custody, he was cleared of all charges. Troy knew how emotionally involved in the case Jay was, and promised to keep him in the loop. More than anything right now, he needed his opinion and advice. Jay was a sub, far more involved in the scene than Troy was, and he knew criminal psychology. Troy hoped he could help him devise a plan of action before another victim turned up. He didn’t know the best way to warn the community without scaring off the killer or starting a pedestrian manhunt. He didn’t feel comfortable bringing in any of the task force yet, but he wanted to move on this lead while it was still hot. He’d talk with Jay and then take his plan to the team.