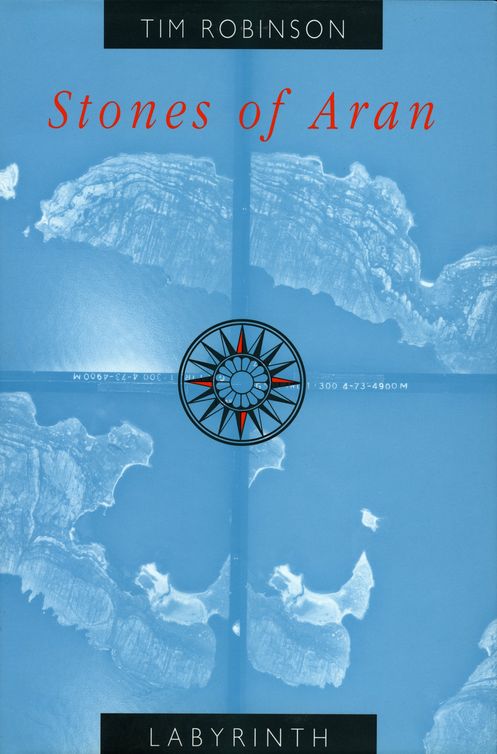 Sworn to the Tower

Tales from the Hill

An Ear to the Coffin

Lights in the Darkness

A Fool and His Gold

In Search of Wasted Time

The Bed of Diarmaid and Gráinne

The Blood of the Heart

A Mouthful of Echoes

The Village of Contented Women

A Poet and His Village

Seven Churches and a Factory

Looking Out of Aran

Running Out of Time

The Aran Islands, Galway, and Clare

Stones
of Aran,
Tim Robinson’s two-volume masterpiece, consists of
Pilgrimage,
published in 1986, and
Labyrinth,
which came out in 1995. It’s hard to think of another author in the literature of place who has managed to combine such intricacy and precision in the mapping of his home terrain with such a passionate,
questing
voice. Robinson’s adopted landscape in these books is that of the Aran Islands, rugged limestone outcroppings that arise to the west of Galway and Connemara. He organized
Pilgrimage
as a series of walks that took him around the entire perimeter of Árainn, the biggest of the islands, to which he and his wife, Mairead, had moved in 1972. In concluding that first account, however, he also recognized the need for a complementary set of excursions: “for a book to stand like an island out of the sea of the unwritten it must acknowledge its own bounds, and turn inward from them, and look into the labyrinth.” The labyrinth is Robinson’s image for the geological and historical tangle of Árainn’s interior—its crevices and bogs; its ruins, relics, and perennially resalvaged building materials; all its tales with their endless
variations
on the lives of saints.

From the start Robinson knows the exact spot where this
second
book will plunge into the interior—Túr Mháirtín at the
island’s
eastern tip, where the circle of his meditative stations began and ended in
Pilgrimage.
But the complexity of his new
undertaking
is compounded by the fact that his excursions must often rely on memory rather than direct observation, since his wife and he moved to the Connemara mainland more than a decade earlier,
just before Robinson had finished the first volume. Further, he is determined now to confront more directly both his own mind and his motivation as an author. Specifically, he must grapple with a certain quality of obsessiveness that makes the
achievement
of any resolution difficult for him. In this regard, he will be both Theseus seeking the minotaur and the hidden inhabitant of the labyrinth.

Robinson is fascinated by every aspect of these flinty,
windswept,
but long-inhabited islands. Even when compared with a writer like John McPhee, who shares his fascination with the lore of plate tectonics, mineralogy, and weathering, Robinson’s
geological
investigations are extraordinarily tenacious and sustained. In his collection of myths about St. Enda and the founders of Aran’s monastic tradition, his genealogy of the O’Flaherty family and other prominent residents, and his accounting of archaeological discoveries at the various prehistoric
dúns,
or forts, his writing is similarly precise. This is one of the first things a reader notes about
Labyrinth:
facts and stories are not subordinated to a larger plot or used to reinforce an argument. Their accumulation is itself the central project: a determination to see and hear what this stony island-world has to say for itself. Such richness of details and connections helps a reader, too, feel the heightened
alertness
of an expedition into uncharted territory.

Robinson, who was already a cartographer before he turned writer, also manages to shape his books with a special
force-fulness
. As in the maps of the Aran Islands and Connemara
produced
by his company, Folding Landscapes, the literary terrain of
Stones
of
Aran
strives for a reliable correspondence with the outer world of shoreline, headlands, and roads. His Aran books and maps are similar, in fact, for their remarkably fine-grained
interior
detail. The key that accompanies Robinson’s map
Oileáin
Árann,
with its scale of 2.25 inches to the mile, equally reflects his ambitions as a writer—with its symbols not only for Neolithic tombs, ancient ringforts, and mysterious grassy mounds, but also for buildings still in use, tumbled-down walls, and the boreens or
paths along which farmers, hikers, writers, and readers may all thread this intricate realm.

In a section of
Labyrinth
called “The Clock,” Robinson reflects upon his book’s goal of arriving at a “coherence of mind” that is “in a connection that can be symbolized as spatial with that
universal
origin.” He strives to achieve a mode of thought and a
quality
of language that are precisely aligned with the origins, forms, and processes of these islands. As he walks along the faultlines of Árainn on their westward course he experiences something akin to the “songlines” by which Australia’s aboriginal people guide their own pilgrimages. Bruce Chatwin has discussed the way in which landmarks of the outback define hallowed paths across that island-continent, avenues that are inseparable from ancient creation myths and that also stimulate an immediate, spiritually charged awareness of the land. For Robinson, similarly, each stage in his exploration of Aran’s fissured surface tells its own story—one that implicitly encompasses the universe for an attentive
listener.
“Spatial,” as Robinson uses the word above, thus describes a mode of deep relationship to topography that comes from
abandoning
oneself to a certain moment in a particular place.

The recurrent references to Proust in
Labyrinth
—one section of which is entitled “In Search of Wasted Time”—express
Robinson’
s desire for a wholeness in which no moment is wasted, no object expendable. Proust insists upon the potential for such unity in his own search, as Ruskin does in another book which
Labyrinth
invokes—
Stones
of
Venice.
These are not merely literary references for Robinson. They are maps he has consulted in
preparing
for his own cartography of inwardness. Near the end of this book he sums up his enterprise in this way:

Pilgrimage, the ritual of attending to things one by one as we come to them, enacts a necessity forced on us by our limitations, our evolutionary stage of mind. In reality everything is co-present (or at least, and so as not once again to oversimplify, an uncountable number of stories struggle competitively through every event of space-time). Even a pilgrimage narrow-mindedly
devoted to one end is endlessly ambushed and seduced by the labyrinth it winds through, while the most comprehensive course we can chart through the incomprehensible is an evasive shortcut.

But Robinson’s wry awareness of his inadequacy to the task he has set himself also allows for another of the most valuable aspects of
Labyrinth.
Again and again, playful moments spring author and readers at least temporarily from the rigor of his larger design. Like an Aran farmer dismantling and rebuilding a stone wall when he wants to move his cattle over to another field,
Robinson
knocks over his concepts and designs from time to time, in scenes that inject a certain silly quality into his quest. His embedded biographies, in both third person and first person, like the highly unsympathetic review of his own book he imagines at one point, cast a humorous glance at the ambitions of
Stones
of
Aran.

Equally striking are a cluster of scenes in which the writer is shown in a more childlike light. Whether Robinson is evoking the gleeful muteness into which he and other patrons of Evelyn’s store enter when an unsuspecting tourist enters that modest
establishment
, his misadventures questing after sheep with Mikey, his attempt to be of assistance to a farmer taking his bull out to service a cow, or his giddy skipping down the scarps under a glorious sunset, he introduces an exuberant quality to
Labyrinth.
The seriousness of the whole endeavor is not lessened by such
moments.
Rather, it is illuminated by them, as the stony islands themselves are transfigured when bathed in light from the west. Long before page 540, where his exclamation “Off with you, nothing but a pack of marked cards!” recalls
Alice
in
Wonderland,
a reader of this book has had occasion to remember several of the classic English books for children.
The
Wind
in
the
Willows
and
Winnie
the
Pooh
remain potent for so many adults because of the ways they evoke long days spent poking about out of doors.
Robinson’s
own secession from institutional life when settling in Aran is a resolute and earnest business, but at the same time feels
like a kind of spree. Perhaps Joyce’s word “jocoserious” captures this doubleness of intent.

Proust famously recovered his own childhood in the taste of a tea-soaked cake. In
Labyrinth
Robinson’s discovery of a nautiloid fossil reminds him of “a pearly nautilus wonderfully striped in carmine on rosy white” in “a book of my childhood days,
The
Story
of
Living
Things
and
their
Evolution
by Eileen Mayo.” He recalls how “[t]his magically named creature used to conduct my imagination through phosphorescent seas across which
jungle-archipelagoes
breathed cinnamon and a diffuse longing for some incomprehensible adventure.” Such entrancing associations with a fossil preserved in the chiseled rock of Aran reinforce
Robinson
’s sense that this gray northern realm is itself a touchstone for all the largest geological and evolutionary transformations of our earth. They account for his decision to devote so many years to circling and then bisecting this island less than eight and a half miles in length and less than two and a half miles across at its widest. And they always remind him, amid his most painstaking investigations, that “the most comprehensive course we can chart through the incomprehensible is an evasive shortcut.”

However, it will already be clear that Aran, of the world’s countless facets one of the most finely carved by nature, closely structured by labour and minutely commented by tradition, is
the
exemplary terrain upon which to dream of that work, the guidebook to the adequate step.
Stones
of
Aran
is all made up of steps, which lead in many directions but perpetually return to, loiter near, take shortcuts by, stumble over or impatiently kick aside that ideal. (Otherwise, it explores and takes its form from a single island, Árainn itself; the present work makes a circuit of the coast, whose features present themselves as stations of a
Pilgrimage,
while the sequel will work its way through the
interior
, tracing out the
Labyrinth.
)

(from “Timescape with Signpost,”
Stones
of
Aran,
Vol. I,
Pilgrimage
)

From this point … I see once again the ruined watch tower perched high above the Sound, marking the resting-place of St. Gregory of the Golden Mouth. It suggests the possibility of going round the island once again, looking at everything in more detail, or in others of the infinity of ways of looking.
Perhaps
a second circuit would be more rewarding now that my pace has been chastened by so many miles, my breath deepened by so many words. But for a book to stand like an island out of the sea of the unwritten it must acknowledge its own bounds, and turn inward from them, and look into the labyrinth.