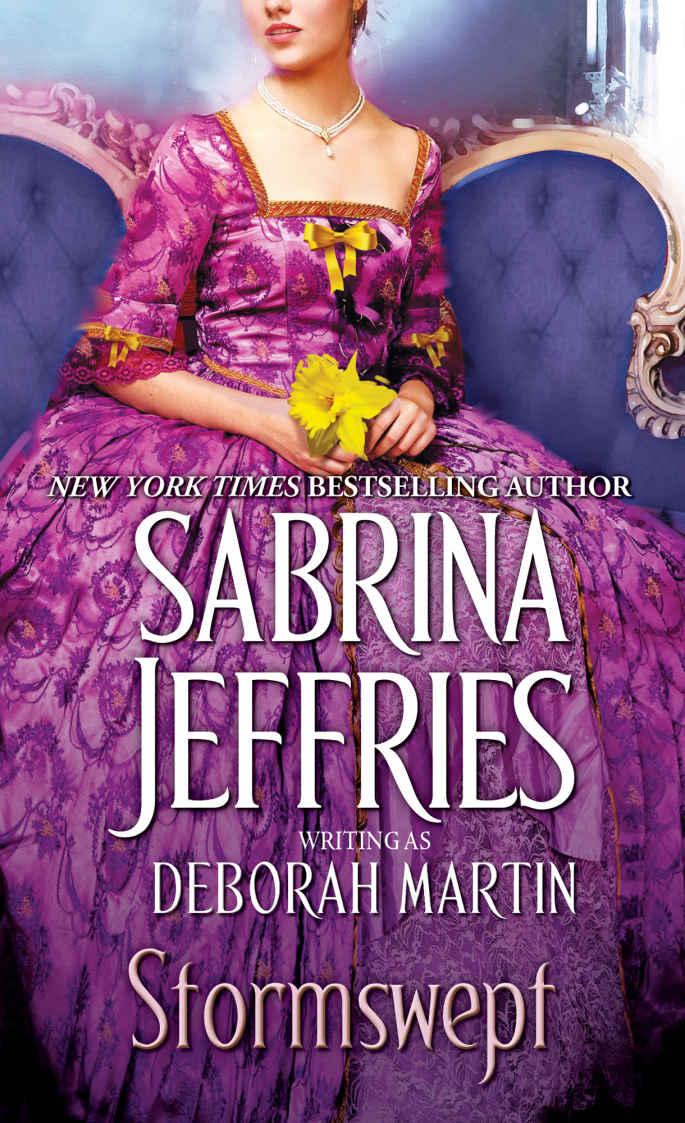 When Pocket Books decided to bring
Stormswept
back into print, I was thrilled at the chance to revise and refresh another novel I’d penned long ago under the name Deborah Martin. My early works set the stage for my career to come: first, the historical detail, passionate action, and darker tone of the Deborah Martin novels. And later on, the sensual entanglements, witty repartee, and lighthearted spirit of my recent Regency series, the Sinful Suitors and the Hellions of Halstead Hall. Both styles are infused with the sexy romantic liaisons my readers have come to expect in my books.

In
Stormswept,
Lady Juliana St. Albans is reunited with dark and daring Rhys Vaughan, the husband she thought had abandoned her after their wedding night years ago. Battling mistrust, yet longing for the love they once shared, they must unravel a maze of mystery and menace to find love again. In this tale of desire and deception, I heightened the drama, enriched the story line, tightened the dialogue, and stoked the heart-pounding sexual tension between these entangled characters. I hope you enjoy this story, whether it’s a past favorite or a new adventure for you to relish!

“ANYONE WHO LOVES ROMANCE MUST READ SABRINA JEFFRIES! ”

Sabrina Jeffries’s delightful Regency series featuring the St. George’s Club, where watchful guardians conspire to keep their unattached sisters and wards out of the clutches of sinful suitors.

THE ART OF SINNING

“With every book, Jeffries grows into an even more accomplished writer whose memorable characters and unforgettable stories speak to readers on many levels.”

“
The Art of Sinning
is an endearing beginning to a new series, and showcases Jeffries’s talents in making the reader swoon in delight.”

They are an investigative agency born out of family pride and irresistible passion . . . and they risk their lives and hearts to unravel any shocking deception or scandalous transgression!

IF THE VISCOUNT FALLS

HOW THE SCOUNDREL SEDUCES

WHEN THE ROGUE RETURNS

“Blends the pace of a thriller with the romance of the Regency era.”

“Enthralling . . . rich in passion and danger.”

WHAT THE DUKE DESIRES

“A totally engaging, adventurous love story with an oh-so-wonderful ending.”

“Full of all the intriguing characters, brisk plotting, and witty dialogue that Jeffries’s readers have come to expect.”

The Hellions of Halstead Hall

“
A Lady Never Surrenders
wraps up the series nothing short of brilliantly.”

TO WED A WILD LORD

HOW TO WOO A RELUCTANT LADY

A HELLION IN HER BED

THE TRUTH ABOUT LORD STONEVILLE

“Jeffries combines her hallmark humor, poignancy, and sensuality to perfection.”

To librarians everywhere, including my husband. Without you, I couldn’t have done my research for this back in the early ’90s. Thank heaven for interlibrary loan!

J
uliana St. Albans knew hardly anyone at her betrothal dinner. Her family had invited only the cream of Carmarthen society, so most other guests were English nobility connected with her betrothed. A twenty-course feast awaited them, champagne already flowed freely, and a costly orchestra was playing.

She would have preferred less ostentation, but whatever Darcy St. Albans, the Earl of Northcliffe, wanted, he got. And her brother wanted to impress everyone with his newfound wealth, particularly her husband-to-be—Stephen Wyndham, Marquess of Devon.

Believing the marquess to be as ambitious as himself, Darcy had already invested in a mining project with Stephen. But her kind and considerate betrothed was nothing like her bullying brother. Stephen was more like Rhys.

As the image of a tall, lean man with eyes blue as the Celtic sea leapt into her mind, she frowned. Why couldn’t she evict Rhys Vaughan from her thoughts?

I’m not betraying him by doing this. I’m not!

He was dead, for pity’s sake! She had a right to be happy, to have children at last. At twenty-seven, she wasn’t getting any younger. And since her one glorious night with Rhys six years ago hadn’t given her a child . . .

A blush stained her cheeks. “Oh bother.” Lifting her skirts, she headed for the stairs. She refused to spend one more
moment
thinking about a man who hadn’t even tried to write her in the years before his death.

As she descended the wide staircase, the guests—and her betrothed—turned to watch. The attention made her squirm, especially when Stephen’s hot gaze raked down to linger on the swells of her breasts. Why did that make her uncomfortable?

When she reached his side, he offered her his arm. “The beauty has arrived at last.”

She took it with a smile. She was being silly. Of course her betrothed found her desirable. And she couldn’t have children unless he did. “Good evening, my lord. You’re looking handsome this evening.”

Before he could reply, the others crowded around them offering congratulations. One elderly woman leaned in. “I suppose you’ll be moving out of Llynwydd, Lady Juliana.”

Stephen spoke for her. “Since Llynwydd belongs to her, of course we’ll repair there from time to time. But we shall live at Wyndham Castle in Devonshire.”

“That will certainly be a more pleasant place to reside,” the woman said. “And no doubt easier to manage, since you won’t have to deal with stupid and incompetent Welsh servants.”

Juliana bristled. “I beg your pardon, but I do not hire stupid or incompetent servants. My Welsh staff is exemplary.”

Squeezing her hand, Stephen hastened to add, “Juliana’s been fortunate in her choice of servants, but I’m sure she’ll find mine more agreeable. They’re all thoroughly English.”

As the woman sniffed and moved off to relate Juliana’s comments to her friends, Juliana bit back the impulse to correct Stephen. Thoroughly English indeed! If the surly staff at Wyndham Castle were indicative of the English nation as a whole, then England was in sad straits.

“Is my sister waxing poetic about the Welsh again?” her other brother, Overton, came up to ask.

Stephen flashed her an indulgent smile. “You know Juliana. She defends everyone.”

Unlike Darcy, Overton would probably rather be hunting with his rapscallion friends than hobnobbing with his peers. “I was wondering if you know that fellow by the window. He’s been glaring at you two ever since Juliana came downstairs. He looks familiar, but I can’t place him.”

When Juliana turned to look, Overton added, “Damn. He must have walked off while we were talking. I’ll point him out later. Don’t like the looks of him. Not a congenial sort, I’ll wager.” Overton glanced at Stephen. “Hope he’s not one of your friends.”

“Oh, I doubt it.” Stephen scanned the room. “He’s probably some acquaintance of Darcy’s.”

While the two men continued talking, Juliana’s mind wandered. She wished she’d seen the man Darcy had spoken of. All this attention from strangers was unnerving. As
mistress of Llynwydd, the estate her father had given her, she’d led a solitary life. But Stephen had already warned her that they’d be doing a great deal of entertaining at Wyndham Castle.

She hated entertaining. She much preferred the challenge of running her estate, even though her parents and their English friends had thought it scandalous that a woman should live away from home and manage property alone.

Fortunately, the Welsh tenants and staff didn’t care who ran Llynwydd as long as it was done efficiently, especially since it made a good profit, which had eventually silenced her family’s objections. A pity she had to leave it all behind.

A servant stepped into the drawing room and announced that dinner was served, but Juliana scarcely noticed, wondering if she’d made a mistake in agreeing to marry Stephen. It wasn’t as if she loved him. She felt a great deal of affection and respect for him, but was that enough? Darcy’s marriage amply illustrated that matches not based on love could be disastrous.

Embrace the Wind by Caris Roane
Chasing Ivan by Tim Tigner
Presumed Dead by Shirley Wells
Polar (Prequel): The Turnagain Arm by Flanders, Julie
Alibis and Amethysts by Sharon Pape
Dusty Britches by McClure, Marcia Lynn
The Best of Friends by Joanna Trollope
Launched! by J A Mawter
Illegal Liaisons by Grazyna Plebanek
Poison: A Novel of the Renaissance by Sara Poole