Strike 2: Dawn of the Daybreaker 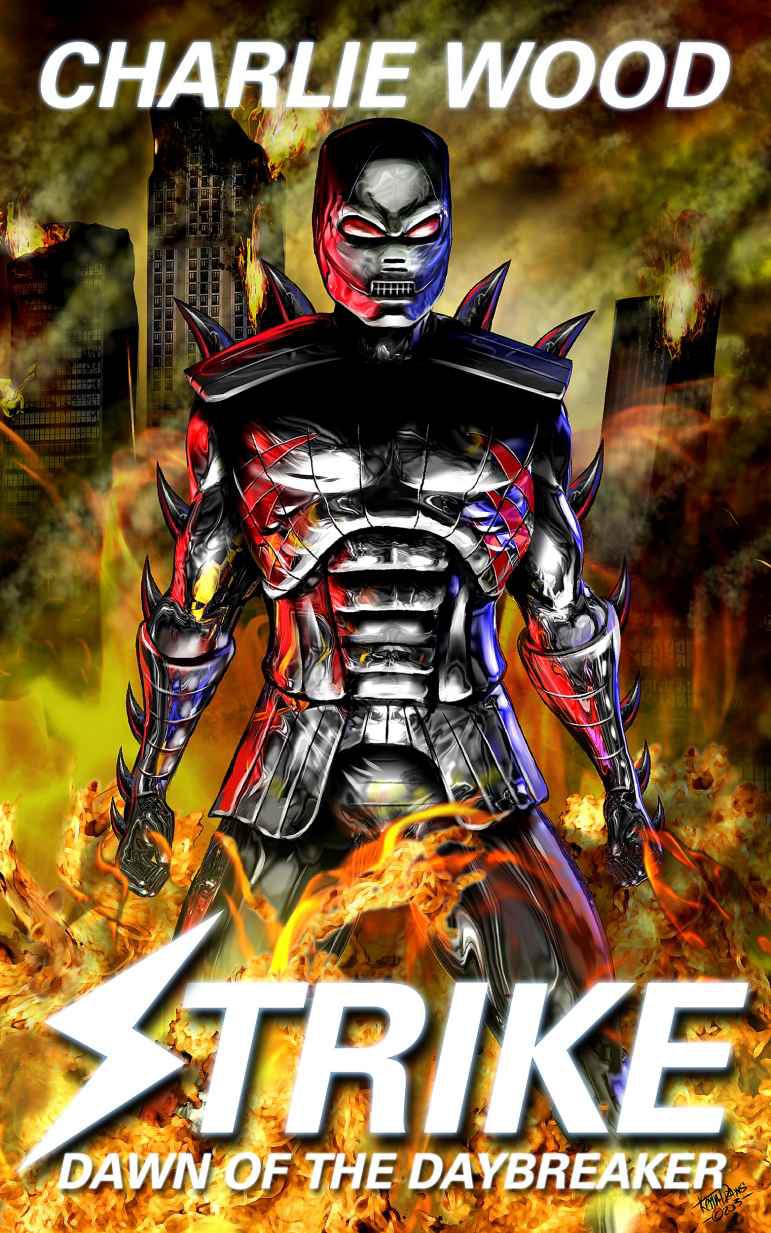 Strike: Dawn of the Daybreaker

All rights reserved. No part of this book may be reproduced in any form or by an electronic or mechanical means, or the facilitation thereof, including storage and retrieval systems, without permission in writing from the author, except by a reviewer, who may quote brief passages in a review.

This is a work of fiction. Any similarities between the characters, places or events that take place in this book are strictly coincidental.

The night air was hot and still as Rigel trudged through the jungle. The seven-and-a-half-foot, red-skinned giant had been walking for hours now, and even his feet—strong, tough, elephant-like—were beginning to ache with each step. But, the pain did not matter, because he was almost there now. Almost home.

Rigel turned to check on his two companions. Luckily, they were still there, but they looked even more tired than him. One of them was a young woman named Adrianna; she was in her early twenties and impossibly beautiful, with long, pin-straight dark hair, almond-shaped eyes, and fine skin nearly the color of snow. She also had an incredibly fit body, which was covered by a tight-fitting purple costume complete with a black cape on her back, black gloves, and tall, black boots on her feet. The other companion, the man in his mid-thirties named Nova, was more difficult for outsiders to figure out: he spoke rarely, and when he did it was always in a calm, collected manner. He was tall, and on his body he wore a green costume with white gloves, white boots, a long, white cape, and a large, multi-pointed white star on his chest. Other than that, his appearance was a total mystery—no one alive had ever seen his face, for his entire head was always covered by a featureless, grey mask made out of thin, metal wires, which crisscrossed over each other so tightly that it was impossible to see past them. From a distance, he looked like a medieval fencer—stoic and composed, but also standing up straight and ready for action.

The strange trio—Rigel, Adrianna, and Nova—continued their trek through the dark jungle until finally Adrianna turned to Nova.

“Are we almost there?” she asked. It was the first time anyone had spoke in nearly an hour.

But Nova said nothing.

“Um, hello?” Adrianna asked. “Nova? Are you awake? Are we almost there or what?”

She shook her head. “‘Be patient.’ That’s what you’ve been telling me for the past two hours, and all it’s gotten me is half a ton of mud in my boots, probably a few bacterial infections from that river we had to cross, and who-knows-how many poisonous bug bites from bugs I’ve never seen before and hope to never see again. What makes you think we’re almost there?”

“Because he showed me the map before we left.”

“He showed you the—there’s a map?” Adrianna asked. “What the hell? Why didn’t I see a map?”

“Because he doesn’t trust you.”

Adrianna glanced at Rigel in front of them. “Oh, great. I’m trudging through the damn jungle for ten hours and he doesn’t—”

The trio walked a few more steps, and eventually came to the trunk of a massive, downed tree. After climbing over it, Adrianna looked ahead, hoping to see some sign of life, but instead saw only more unending green jungle and darkness.

“This is stupid,” she whispered to Nova. “You can waste your time with Big Fat Fatty here, but I’m going back. There is absolutely nothing here that will—”

Nova stopped and held a hand in front of her.

“Shh,” he said, with a finger against his mask.

Adrianna looked to Rigel—the red giant had stopped, and was now looking down at the dirt. His body was swaying back and forth, and he was singing softly in a strange language.

Adrianna felt a low grumbling in the ground beneath her feet. She stepped back, cautious, and looked to Nova. But the grey-masked man didn’t move—he was simply looking ahead and watching Rigel, as if he knew what was about to happen.

The red giant dropped to his knees. Adrianna couldn’t see much of the giant’s yellow eyes behind the hood he was wearing, but it looked like he was crying. She watched his hands—one of them reached down and grabbed a handful of loose dirt, letting it run through his fingers, while the other hand reached into his robe and retrieved a silver control panel with dozens of buttons on it. Without looking, the red giant pushed a series of buttons on the control panel, all while continuing to sing his bizarre song.

Adrianna was startled—the grumbling underneath her feet erupted into an earthquake, and she had to reach out and grab Nova’s shoulder for support. As she watched in awe, a giant stone statue of a bizarre beast rose from the ground, tearing up the dirt and knocking over the trees and ripping through the dense vegetation all around it. The stone beast was as big as a house, and had the head of an ape, the body of a lion, and the wings of an eagle. It was lying flat on its stomach, with its head facing the trio, and when Adrianna looked closer, she realized that it wasn’t a statue—it was the entrance to an underground building, with the beast’s open, roaring mouth acting as the doorway.

Adrianna stared at the stone beast. “You know...I think you might be on to something.”

Rigel walked toward the doorway. “Thank you for your patience. He will allow us to enter now.”

Adrianna and Nova followed Rigel under the beast’s giant, hanging fangs, and walked into the darkness of its insides. Adrianna was careful and intrigued, but Nova and Rigel were unfazed. This was especially true of Rigel, who was walking with a quick conviction, as if he could not wait any longer for what they were about to find inside this mysterious stone beast in the middle of Capricious’ most dangerous and unexplored jungle.

At first, Nova and Adrianna could see nothing inside the beast, until Rigel lit three torches. After he handed one to each of them, the red giant led the group through a long, dark corridor, which sloped downward, leading them deeper underground. The corridor’s walls were made out of thousands of rectangular grey stones, and although they were spotted with a few cobwebs and the floors were dusty from not being used in years, the trio could still appreciate the elaborate decorations inside the underground hallway—beautiful paintings of green, tiger-like beasts ran along the walls, and stunning candelabras burst with illuminating flames as Rigel passed them with his torch.

After following the twisting, turning, stone-walled corridor further underground, the trio finally reached its end: it lead to a ten-foot tall, gold-trimmed entryway, and beyond the entryway there was a dark room filled with odd shapes and shadows. Before Adrianna and Nova could walk into the room, however, Rigel stopped and stood in front of them.

“Do you believe?” Rigel asked Adrianna.

“Do you believe in the Rantamede and pledge your life to him and his quest for universal peace?”

She shot him a smirk.

“Do you pledge your loyalty to him?” Rigel asked again, more forcefully this time.

“Do you give him your life?”

“Until the very end?”

Rigel reached out with his tree-trunk arms and embraced Adrianna, pulling her close. She was surprised, not to mention in a bit of pain from the overzealous squeeze.

“He will be very pleased to meet you,” Rigel said.

“Can’t wait,” Adrianna replied, wriggling out of the hug before her ribcage was crushed.

Finally, with a smile that neither Nova nor Adrianna had ever seen, Rigel walked through the golden entryway and into the shadowed room at the end of the corridor. Adrianna and Nova followed him and inspected the underground cavern: it was a large, circular room, with dozens of candelabras burning brightly, a domed ceiling, and more artwork of half-human, half-animal creatures along the walls. There were also rows of statues of animals made out of black marble, and in the center of the room there was a beautiful green pillar made out of pure emerald, which stood about eight feet high. As stunning as the room and its contents were, however, it was clear that no one had been inside it for years, maybe even decades: there were spider-webs in the corners and on the statues, and the floor was littered with tattered nests and animal bones. In the silence, every few seconds, the trio could hear the sounds of scurrying rodents and insects.

“Wait here,” Rigel said to the others. “He may look...strange to you.”

Nova and Adrianna watched as the red giant walked toward the emerald pillar in the center of the room.

“Is he talking about…?” Adrianna asked.

Rigel knelt in front of the green pillar and bowed his head. After he whispered and mumbled in the strange language, a burst of black fire erupted atop the pillar. When Rigel looked up at it, the fire swirled and snapped, until it began to take the shape of a pair of eyes, a nose, a goatee, and a mouth. Soon, there was a green face of a man in the middle of the black flames, and it was a face Rigel knew very well—it was the face of his mentor and leader, Vincent Harris.

Rigel watched the face for a few moments, before looking to the ground, overcome with emotion.

“Hello, Vincent,” the red giant said. “It is a great honor to finally see you again.”

“How long have I been gone, Rigel?” the image of Vincent asked.

“Seven months, sir. It has taken me seven months to heal from my injuries and arrive at this place.”

Near the entryway, Adrianna and Nova were watching Rigel have his conversation. However, Adrianna was confused—to her, it appeared Rigel was having this conversation with thin air. She did not see either Vincent’s face, or the black flame atop the pillar.

“No. But Rigel does. And that’s all that matters.”

Near the pillar, Rigel was staring at the ground and grimacing, shaking his head.

“I am sorry, sir. I have no excuses for why it has taken me so long to find you.”

“You have nothing to apologize for, Rigel,” Vincent said. “Without your determination, Rytonia and the entire universe would be lost. You are the reason our people, and our dreams for Capricious, still live.”

Adrianna watched Rigel from a distance, with a skeptical frown.

“I don’t get it,” she said. “Does he really see something, or does he just
think
he’s seeing something?”

Nova shook his head. “I don’t know. But as long as he’s convinced he’s talking with Vincent, and as long as it leads us to what we want, that’s all we need to be worried about.”

“I wish I was there, too,” the image of Vincent said to Rigel, “but you know that can’t be. I am gone forever, and it is up to you now to look over our people. It is time for you to fulfill your destiny. That is why it is so important for you to find the others.”

“Yes,” Rigel replied, motioning to Nova and Adrianna, “these two heroes have joined me. They have pledged their lives to you, and to helping us achieve universal peace.”

Adrianna leaned over to Nova. “Gee, I hope non-existent man approves of us,” she whispered.

“You have done well to find them, Rigel,” Vincent continued, “but there is still one more member that needs to join you. You know there needs to be another.”

“Yes,” Rigel said. “He is not here yet, sir. But we are working on finding him, and have come here to carry out our plan.”

“Good,” Vincent replied. “Because without the Daybreaker, you have nothing. He is the one to bring peace to Capricious. Without him, you cannot succeed.