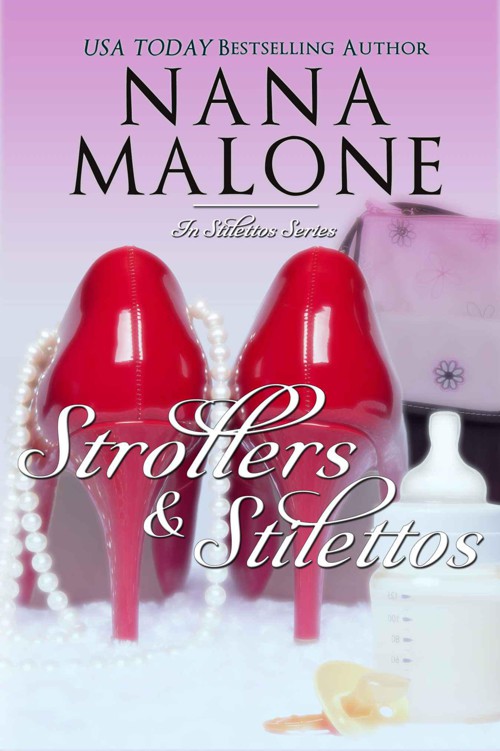 The
In Stilettos
Series

To women everywhere who love their shoes and love their friends even more. Nothing like a pair of stilettos to boost your confidence.

The In Stilettos Series (Contemporary Romance)

Alec Danthers-Westhorpe gritted his teeth, desperately trying to hold back his impending orgasm. Prickly heat fired over his skin, and sweat beaded on his forehead as his heart raced. His hands involuntarily tightened into his wife’s thick hair, and she moaned around his cock.

She moaned again as she sucked deep, and his eyes crossed. Jaya drew back slowly, licking the head of his cock. “Yes, Alec?”

“Come here,” he growled as he reached for her.

She inched back. Not like she had a lot of room, as he’d dragged her into a utility closet. Teasing him with the tip of her tongue and licking the pre-come off the tip of his throbbing erection, she shook her head. “No time, baby. Now let’s see if I can’t make you—”

He wasn’t in the mood to listen today. These days, finding time together was difficult, so they’d resorted to daily quickies. Okay, sometimes twice daily. But it was only enough to take the edge off. Never enough to fully satisfy. It was like feeding a starving carnivore hummus or quinoa instead of a steak. Getting more than ten minutes together was proving to be difficult. And with his travel demands, he didn’t see her nearly enough. Today, he didn’t care about being late to his next meeting. He needed to make love to her.

Tugging her to her feet, he whispered, “We’re going off-script today.”

Jaya laughed. “You mean pulling me into this closet wasn’t part of the script? I thought you had a thing for closets.”

He grinned as he remembered the first time they’d been locked together like this, desperate not to make any noise and get caught. His cock twitched as the memories flooded back. Merely thinking about the way she’d struggled not to cry out as he’d pumped her deep and played with her ass was enough to make him nearly come.

Jaya’s breath hitched as he rolled a thumb over her nipple. But even as a small moan escaped, she put on her rational hat. “Alec, you have a Kleinman meeting today. He’s important.”

“I don’t give a shit. Besides, this is the planning meeting for the Kleinman meeting. And making my wife come is going to do a whole hell of a lot more to relax me than going over the presentation over and over again.”

Gathering the material of her skirt, he tugged it up, eager to see which set of garters and panties she’d tease him with today. He wasn’t disappointed. Sheer stockings hugged her cinnamon-brown skin and were held up by his favorite set of garters. Fire-engine red.
Holy fuck
. His cock throbbed painfully.

He set her on the tiny utility table and splayed her legs. Slipping his thumbs under the edge of her panties, he hissed when he encountered soft, slick, silky flesh. “I fucking love how wet you get for me.”

“You’re the one who does this to me.” She ran her teeth over his earlobe, and he swore softly.

All he wanted was to take his time devouring her, but he knew she was right. He’d have to wait until they were home, when hours stretched out in front of them not minutes. Yeah, whenever that was.

He kissed her deeply while he impatiently shoved aside the swatch of fabric. He circled her clit, and she canted her hips up, leaning into his touch. With his free hand, he unbuttoned the front of her blouse enough to expose the matching bra.
Goddamn
. He didn’t have the time or patience to savor, so instead, he shoved down the cup of her bra, exposing one of her breasts to his view. Tearing his lips from hers, he bent his head to suckle her, taking greedy pulls of her nipple as he used his finger to stroke her slick channel and his thumb continued to tease her clit. Jaya milked his finger with soft, silken walls, and he added another.

Intense need drove him. She was his. Really his. Left to him, he’d do nothing but keep her naked in his bed all day, every day. Her pussy was tight and slick and hot, pulling at his questing fingers. Reluctantly, he slowed the pace. He wanted her to come, but he wanted to have his dick inside her when she did.

“Can you feel how much I want you?” He drew her hand to his straining erection.

The tiny voice in the back of his mind tried in vain to remind him that he didn’t have time. But he ignored it. He needed to taste her—just one taste. When he dragged his teeth over her nipple, Jaya clamped a hand over her mouth as she screamed. He smiled to himself at her attempt at concealment. Personally, he didn’t give a shit who heard them. Instead, he focused on placing scorching, open-mouthed kisses down her torso and belly until he reached her hot, slick center. His tongue, sure and agile, lapped at her. He knew exactly how to get her where he wanted. Not too much attention on her clit. She preferred the tease.

As he sucked, she wound her hands in his hair, tugging gently, leading him to where she wanted him to go. “Baby, please.”

More than happy to oblige, he teased her silken entrance with his thumb then gently drew it back over the pucker of her ass. With one slow circle over the taut skin, a deep shudder wracked her body.

Knowing how close she was, he didn’t waste time. He crawled back up over her body, his hands planted firmly on her knees to keep them wide. The head of his cock nudged her entrance, and Jaya dragged open her eyelids to meet his gaze. Alec stroked deep into her, never breaking eye contact.

With his first slide in, she dug her nails into his shoulders as her body quaked. On his retreat, his cock hit the bundle of nerves deep inside her body, and she cried out as her orgasm rolled into a second one. On his third stroke, Alec watched as he entered her. That was all it took to send him over the cliff behind her.

Beneath him, Jaya chuckled as she stroked his back. “You can feel free to convince me any time. I love your tactics.”

Alec moaned as his dick twitched inside her.
Easy boy
. He needed to find more time with her. This was too good to rush. “I wish I didn’t need to sneak time with you.” He stole a brief kiss.

Jaya wrapped her legs around his back. “We’ll make it work. We just need to settle into a groove. After all, this is only a prelude to how crazy our lives will be once we start a family.”

Family?
If he couldn’t find time with her now, a family certainly wouldn’t help. He’d taken this job to give her the kind of life she deserved, even if it meant he had to give up a little of who he was. Starting a family would mean there was no recapturing any of who he used to be. He kissed Jaya gently. “How about we focus on the two of us for the time being?”

She laughed. “Relax, there’s no rush.”

Despite her words, he recognized the hint of longing, and something cold and unsettling slithered around his spine. He wasn’t sure he could give her what she wanted.

“I’m going to need those shoes back.” Jaya Trudeaux took a sip of her margarita as she addressed her best friends.

Jaya laughed. “Not exactly. I’m trying to bring the sexy back. Lately, Alec and I have barely seen each other with all the traveling he’s doing for the Westhorpe in Vancouver and the planning I’m doing for this year’s Westhorpe Gala. Then add to that the planning for Ricca’s engagement party on Saturday and my bronchitis from a few weeks ago, and we’re long overdue for some quality alone time. Hence, I
need
the shoes.”

Micha laughed as she stood. “I thought happily ever after was filled with hot sex and frolicking in meadows or some shit.”

Jaya smirked. So had she, if she were being honest. Well, okay, the sex was still hot. But when she’d married Alec six months ago, she’d figured they would settle into an everyday life of shared work and nights spent doing nothing but exploring each other’s bodies. But as the Senior VP at Westhorpe Inc., her husband had been up to his eyeballs in the latest build in Vancouver. And she’d been buried in plans for the end-of-year gala. They managed to see each other in stolen moments at the office, but they were long overdue for something that was
not
a fevered quickie. Not exactly the post honeymoon, sex-blissed haze she’d pictured.

Ricca Munroe, her other best friend, sat up with a frown. “You mean to tell me that it’s not sunshine and roses? Then I’m not doing it.”

“Hold up now,” Jaya said. “I have not been planning this day for you to go and back out. Not to mention, you have to see what Micha and I have done for the engagement party. Honestly, it’s inspired.” At Micha’s raised brow and cleared throat, Jaya amended. “Okay, mostly Micha, but
I
was the mastermind.” She blew a strand of hair off her forehead. “You
will
marry the love of your life if I have anything to say about it, and you will enjoy your fantasy fairytale theme if it kills me.”

Jaya had opened her own event planning business over a year ago, and she’d been going nonstop ever since. Taking two weeks out for her honeymoon had been hard, but she’d slowed down, and Alec and she’d had the time of their lives. She wanted to recapture some of that.

Micha scrunched up her nose as she stood. “You’re making marriage sound so appealing, Jai, you really are.”

Jaya merely laughed. Micha had been notoriously commitment phobic before meeting her fiancé Caleb. Now her wedding was scheduled in six months. Jaya tried not to remind Micha too often for fear of spooking the bride-to-be. It was clear to anyone who watched that Micha was head over heels in love with Caleb, but she was just as likely to run off and elope as she was to do the-walk-down-the-aisle thing. And Jaya, for one, was not missing those nuptials.