Read Sunset Strip: A Tale From The Tome Of Bill Online

Sunset Strip: A Tale From The Tome Of Bill 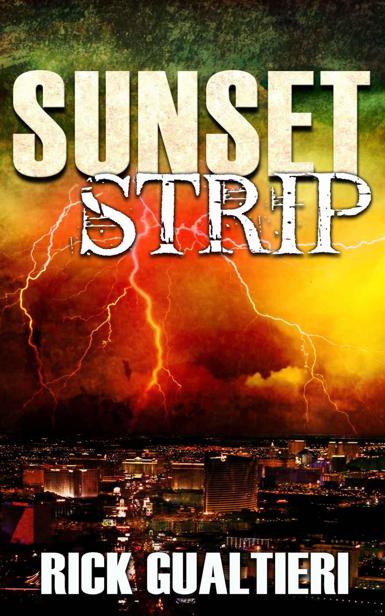 A Tale from the Tome of Bill

No part of this book may be reproduced or transmitted in any form or by any means, electronic or mechanical, including photocopying, recording, or any information storage and retrieval system, without prior written permission of the author. Your support of author’s rights is appreciated.

All characters in this novel are fictitious. Any resemblance to actual persons, living, dead, or undead, is purely coincidental. The use of any real company and/or product names is for literary effect only. All other trademarks and copyrights are the property of their respective owners.

The views herein are the responsibility of the author and do not necessarily represent the position of Wayman Publishing.

Edited by Megan Harris at

Cover by Mallory Rock at

Visit the author’s blog at:

Special thanks to: Solace, Jonathan, Jenn, and James. Without your help, I’d
still
be shooting people with Dessert Eagles and serving them a big heaping helping of desert after dinner.

Greetings and salutations, dear reader! The story contained within these pages takes place between the events of
Holier Than Thou
and
Goddamned Freaky Monsters
, books 4 and 5 respectively of the Tome of Bill series.

If you’re just joining us, I would humbly suggest you start with
Bill The Vampire
, the Tome of Bill part 1 - albeit you are more than free to ignore my blathering and choose your own fate. Far be it for me to dictate the course of your entertainment.

For veterans of the series, having survived the previous books with (hopefully) your sanity intact, I bid you a fond welcome back. The following tale represents a bit of a departure from the norm. It’s told from the viewpoint of Sally, Bill’s snarky sidekick in the supernatural realm, and is perhaps a bit darker in tone as a result. I hope, though, in the end you’ll agree that it is a more than worthy addition to Bill’s universe.

Regardless of any of the above, I had a hell of a good time writing this story and sincerely hope you enjoy it.

“Who gives a flying fuck what I said? I was talking out of my ass. Nobody has any idea where the hell he is. There hasn’t been a single sign of him and, quite frankly, I’m beginning to think that standing around hoping he’ll come back is a fucking waste of time.”

I didn’t mean to snap...well, maybe I sort of did. When one is in charge of a coven of vampires, one can’t afford themselves the luxury of playing the role of good cop. By our very nature we’re predators, in many ways not too far off from a wolf pack. The problem with predators, though, is that they always have their noses out sniffing for weakness. You show it and you might as well save someone else the trouble and slit your own damn throat.

Complicating matters further is the fact that vampires tend to be backbiting sons of bitches. That’s not necessarily in our nature per-se, but it’s been ingrained in many of us as just the way things are done.

That’s one of the few pains in the ass about being immortal. There’s no such thing as just waiting for the boss to retire so you can take their position naturally. You want to get ahead in the supernatural world, you’d better be prepared to knock someone else off the ladder - all while making sure your own grip is solid.

I locked eyes with Starlight and refused to blink. After a few seconds, she averted her gaze. We’d been playing this game for over twenty years and both knew how it was going to end. At this point it was just a matter of ceremony, nothing personal. We both knew that, too.

She was a good egg amongst a carton of rotten ones, a rarity amongst bloodsuckers. I had always liked her, maybe not quite at the sisterly level, but she’d never been on my shit list. That was a good thing for her because the only way off of it was as a pile of dust.

Still, there were appearances to be maintained. I couldn’t afford to let this place turn into the
Sisterhood of the Traveling Pants
. That would be an open invitation for a challenge, and while I wasn’t particularly worried about our current roster, it would be one more pain in the ass that I didn’t need right now.

“So you really want us to give up, Sally?” She flashed her big brown eyes at me like she was a goddamn puppy instead of a creature of the night.

“I’m not giving up, Star. I’m just being realistic. We’ve searched half the Tri-State area and have found jack shit. If Bill is out there, he doesn’t want to be found. At this point I say we give him the benefit of the doubt and assume that he’ll be back once he’s good and ready.”

I smirked. She hadn’t seen my partner in crime during that final battle with Remington’s men three months back. Once he’d lost his shit, I doubt a tank would’ve been able to hurt him. To think that once upon a time there had been multiple Freewills - the legendary warriors of the vampire race - roaming about. That must’ve been terrifying for normal vamps, much less the enemies that they were supposedly used against.

Still, Bill had never stayed that way for long, at least the few times I had been present. His normal appearance was considerably less intimidating, both in form and function. Hell, half the time I could barely keep the doofus from tripping over his own two feet, especially whenever he started getting all gooey about either his wannabe girlfriend or keeping his humanity.

I let out a small sigh. Maybe Starlight had a point. However, since there wasn’t anything we could do about it, there was no use in worrying about maybes.

“Vampires don’t get hurt. We either heal or we’re dust.” That much was mostly true, albeit there were exceptions to the rule - shiny exceptions I considered as my mind turned to the silver stake in my top drawer...a little souvenir from that fight. Such things could put a nasty hurt on a vampire and keep us that way if someone really wanted to.

I pushed that thought from my head. Bill had enemies, no doubt about that. Still, I sincerely doubted many of them would keep him alive for sheer amusement. Even if they did, they certainly wouldn’t be shy about bragging. As the only one of his kind in existence, he would make a trophy worth displaying for all to see.

You will drown, screaming in a sea of filth!

Starlight jumped at the psychic outburst coming from the gleaming white skull atop my desk. She still wasn’t used to it. By this point, though, it was little more than an annoyance to me.

“Yeah.” I turned my eyes toward the object. I probably should’ve gotten rid of it the second it started acting freaky. It couldn’t have been a good omen of things to come, but still - it was my favorite paperweight. Besides, I had earned the damn thing.

“Do you think it’s ever going to stop?”

“Hard to say.” I ran my hand over it. “It’s quiet for a while, and then just when I think it’s done for good, it starts right up again.”

I raised an eyebrow at the question as if such a concept was beneath my contempt. She didn’t need to know that I had of course tried talking to it.

A week after Starlight had returned from upstate New York with Harry Decker’s skull, the outbursts had started. In life, the guy had been an absolute asshole. In death, apparently nothing had changed. I had little doubt that had something to do with his former status as a master wizard. It seemed that his decapitated cranium still possessed at least a little of his mojo. Unfortunately, communication appeared to be a one-way street, kind of like some sort of fucked up Speak and Spell. There was no acknowledgement from the skull that it was self-aware...just random outbursts of crazy.

We waited a few moments to see if it would continue its tirade, but it remained silent.

“I’ll have Monkhbat do one more sweep down near Bill’s parents’ place in Jersey.” I could barely believe what I was saying. Some days I could be such a softie. Oh, who was I kidding? I was just using Starlight as an excuse to not give up myself.

She immediately brightened, and I rolled my eyes. “Last one. I mean it.”

“No problem, boss,” she replied, a smile spreading across her lips.

“And don’t tell anyone.” I made sure my tone implied that it wasn’t a request. We were close enough in age that it would’ve been pointless trying to compel her - the vampire equivalent of mind control - but that still didn’t mean I wouldn’t make an example out of her if push came to shove.

Three months prior, I had taken over as acting master of Village Coven. This wasn’t really anything different than before. Despite Bill holding the official title, I already ran the show from behind the scenes - quite well, if I did say so myself.

The problem was that shortly before he disappeared, the majority of our coven had been wiped out courtesy of the wad of meat that used to own the skull on my desk. Aside from Bill and me, only four others had survived. Two of them weren’t an issue. The third hadn’t lasted long, a consequence of his own stupidity. The final survivor of that massacre, though, was in the process of testing my patience...greatly. I had little doubt she was undermining me with the new members that had since been recruited.

Firebird and I had been turned at about the same time. In fact, she was the only member of the coven, including permanently deceased members, who I’d known during the days when I could still enjoy a walk in the sun without ending up a pile of dirt.

I allowed a few brief memories of those times to flit through my mind, then locked them up again. Those hadn’t been the best days of my life. Then there had been the betrayal by Uncle...

No. I didn’t have time for that crap. Besides, all of that was behind me now. Sure, I still had to deal with
him
on occasion, but despite his rank, more and more of the game pieces seemed to be falling on my side of the board lately. A good chunk of that had to do with the out of shape nerd that fate had dropped onto my lap - the one who, as it turned out, had more prophecies written about him than Harlequin does banal romances.

I put my business face back on. That was more than enough time spent worrying about Bill. The coven had to be my top priority, especially during
work
hours. Being a coven master definitely has its perks. The downside, though, is if said master isn’t considerably more powerful or clever than the other members, that position can easily become tenuous. I had that second part locked up, no problem, but it was that first that made me sleep with one eye open.

Tina Whittle_Tai Randall Mystery 01 by The Dangerous Edge of Things
Directed Verdict (Failed Justice Book 1) by Rick Santini
Leonardo da Vinci by Abraham, Anna
Abbie's Gift by M. R. THOMAS
Scarlet Imperial by Dorothy B. Hughes
Sons of Thunder by Susan May Warren
What My Girlfriend Doesn't Know by Sonya Sones
The Divine Appointment by Jerome Teel
The Coming Storm by Valerie Douglas
The Human Division #8: The Sound of Rebellion by John Scalzi