Read The Battle of Poitiers 1356 Online

The Battle of Poitiers 1356 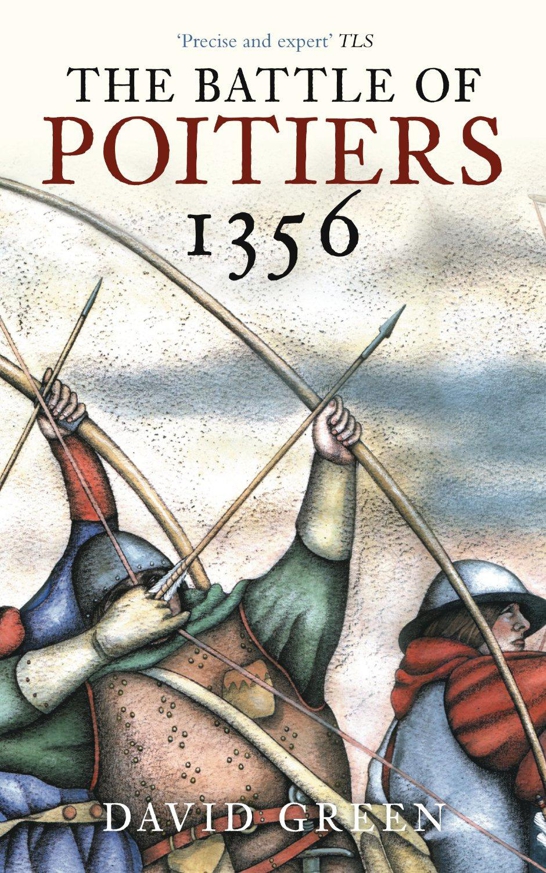 This ebook edition first published in 2013

The right of David Green to be identified as the Author of this work has been asserted in accordance with the Copyrights, Designs and Patents Act 1988.

This ebook is copyright material and must not be copied, reproduced, transferred, distributed, leased, licensed or publicly performed or used in any way except as specifically permitted in writing by the publishers, as allowed under the terms and conditions under which it was purchased or as strictly permitted by applicable copyright law. Any unauthorised distribution or use of this text may be a direct infringement of the author’s and publisher’s rights, and those responsible may be liable in law accordingly.

Introduction: The Black Prince and the Hundred Years War

Chapter One: 1355, the
Grande Chevauchée

Chapter Three: The Campaign of 1356

Chapter Four: The Battle of Poitiers

Conclusion: Poitiers, the Black Prince and his Military Retinue

The Black Prince and
the Hundred Years War

Edward the Black Prince was born at Woodstock in 1330 some seven years before the formal outbreak of the Hundred Years War.
1
The title now given to this conflict, one coined by modern historians, is something of a misnomer. Traditionally, the war is dated from 1337 to 1453 – a period of 116 years – but this does not take account of the broad nature of Anglo-French relations and hostilities in the medieval period. Conflict, although by no means constant, had been endemic long before 1337. In particular, tensions had grown since Henry III of England and Louis IX of France signed the Treaty of Paris in 1259, and these did not cease in 1453 with the fall of Bordeaux. Indeed, the English monarchy maintained its claim to the throne of France after the revolution of 1789 ensured that there was no throne for them to seize.

Like the conflict which he shaped and which dictated the course of his brief life and career – he died in 1376 – the name by which Edward of Woodstock is best known is the product of a much later age. There is no evidence for it being coined until the sixteenth century; the first example is found in Leland’s
Itinerary
, and it was publicised by Raphael Holinshed, whose chronicles provided a source for Shakespeare in whose works the prince appears, as an example and model for
Henry V
and in his own right in
Edward III
, a play which has been accepted into the canon in recent years. The idea that the name derived from a penchant for black armour remains unsubstantiated as does the theory that the name was of French origin, brought on by his brutal raids and victories in battle. Nonetheless, the prince’s reputation in France was certainly ‘black’. It is, for example, apparent in the Apocalypse tapestries commissioned by Louis of Anjou in 1373 which depict Edward III and his sons as demons devastating the French countryside. Certainly, the English
chevauchée
strategy, which the prince perfected in the 1355 raid burning his way across the belly of France from the Atlantic to the Mediterranean, meant that there was little love for this paragon of chivalry in France.

However, there is no doubt that he was considered among the most chivalrous of his generation. Late medieval chivalry was not an ethic or code of behaviour that restrained acts of violence; indeed it encouraged them. The image of the prince painted in the chronicles of Jean Froissart, and the verse biography written by the otherwise anonymous Herald of Sir John Chandos shows that prowess, skill-at-arms and military ability formed the foundations of chivalry. If the strategy that led to victory destroyed the reputation and revenue of one’s enemy by burning and destroying the land, property and persons of non-combatants then this was, by definition, chivalrous. Unfortunately for the prince his success during the campaigns of 1355–6 contributed to later difficulties when he became prince and near-sovereign ruler of much of Aquitaine

The Black Prince is remembered above all as a warrior. Yet, his reputation as a military leader belies the small number of campaigns in which he was involved. He commanded the
chevauchées
of 1355 and 1356 and the Spanish campaign of 1367, but in the Reims expedition (1359–60), as he had been at Crécy (1346), he served as his father’s lieutenant and had little responsibility for strategy. Nonetheless, he appears to have been an extremely capable leader of men and a daring tactician who also enjoyed an element of good fortune on the battlefield. But it is difficult to draw any firm conclusions about his military ability from these few examples. The Black Prince and the men under his command, particularly his chief captains and lieutenants, several of whom are described in further detail in the Appendix, played a vital role in a wider English strategy orchestrated by Edward III. The success of this strategy, encompassing both foreign and military policy – broadly defined – resulted in English (and Anglo-Welsh/Anglo-Gascon) armies building a European reputation. The triumphs of Crécy and Poitiers erased the disgrace of Bannockburn (1314), and gave the victors the status of the finest warriors in Europe. The associated military developments, which some have described as revolutionary, saw great advances in recruitment, provisioning, strategy and tactics. As the heir-apparent and his father’s lieutenant the prince exemplified these advances and took full advantage of them.

As a consequence, the Black Prince represents the broader English experience in the Hundred Years War. He fought in the vanguard at the battle of Crécy aged sixteen, and he witnessed the long siege of Calais (1346–7), which followed the triumph. Calais may seem a disappointing acquisition after such a comprehensive victory, certainly it may have been less than Edward hoped for, but the coastal town provided an excellent base for future military incursions and became a major trade centre when the wool staple was established there. The town saw further military action in 1350 which enhanced the prince’s reputation. The celebrated French knight Geoffrey de Charny offered Aimery of Pavia, governor of Calais, 20,000 crowns to betray the town in late October 1349. Aimery, however, passed on news of the plot to Edward III, and under the banner of Walter Mauny, the king and his eldest son, along with trusted knights such as Guy Brian successfully ambushed the attackers.

After the siege of Calais the devastation of the Black Death curtailed further large-scale military action. Intense diplomatic activity marked the years until 1355 when the prince and others led a number of devastating raids deep into the French countryside. In the following year the indignities heaped upon the French were compounded when the prince captured Jean II, ‘the Good’, king of France, at the battle of Poitiers. This marked the point at which the prince truly took his place on the European stage.

Pressing home their advantage the English launched a further expedition in 1359. This failed to capture the coronation city of Reims, and nor could the English take Paris, but in 1360 the French agreed to the treaty of Brétigny-Calais in 1360. The treaty offered a king’s ransom for Jean II and the transfer of sovereignty over nearly a third of the kingdom of France to Edward III. Much of this was entrusted to his eldest son who in addition to his many estates in England and Wales received the title Prince of Aquitaine.

The treaty of 1360, although flawed, was a serious attempt to end the war, but it did not endure and set a dangerous precedent. Indeed, when Henry V embarked on the Agincourt campaign (1415) he did so demanding restitution of that which he claimed was still owed from the treaty of Brétigny. In this fashion the failures of diplomacy fanned the flames of the Hundred Years War. So too did many other lesser, regional conflicts that were dragged within the orbit of the Anglo-French war. These ensured the Hundred Years War became a truly European conflict.

In a narrower sense the Hundred Years War was a struggle between the French king and his magnates. The principal opposition was the king of England in his capacity as duke of Gascony, but Charles ‘the Bad’ of Navarre also proved a thorn in the flesh of the French monarchy as he sought to play off Valois against Plantagenet to his own advantage. This led to the battle of Cocherel on 16 May 1364, in which a number of the prince’s retinue participated. There the mercenary captain Bertrand du Guesclin, confirmed his growing reputation with victory over a Navarrese army assisted by some English and Gascon troops led by Jean de Grailly, the captal de Buch, a key Gascon supporter of England who was captured.

The duchy of Brittany provided another area of friction. A war of succession between Charles de Blois and Jean de Montfort saw the protagonists looking to secure the support of France and England on their respective sides. In this unfolding conflict the prince played an important political and diplomatic role, and a number of his retinue and household took a more direct part. John Chandos led de Montfort’s troops at the clash at Auray on 29 September 1364. Alongside the English condotières, Robert Knolles and Hugh Calveley, Chandos successfully countered experimental French tactics designed to negate de Montfort’s archers. At Auray the tight formations of the Anglo-Breton forces triumphed in the mêlée in which Charles de Blois died and du Guesclin, who had led French forces in Charles’ ranks, was captured – not for the first or last time.

Such encounters were characterised by the extensive use of mercenary troops. The Anglo-French war was not, of course, the first time mercenaries were used on the battlefield, but the longevity of the conflict and the variety of theatres in which it was fought provided a great number of employers and opportunities for such soldiers. Consequently, in the ‘cold war’ period from 1360, and especially after Auray, until the reopening of the war in 1369 there was a large pool of unemployed troops. The early 1360s saw the mercenary Free Companies raiding and ravaging the French countryside. They proved no minor inconvenience and hit hard a country that had already suffered the depredations of twenty years of English raiding, the social, demographic and financial effects of the Black Death, the revolt of the Jacquerie, the fiscal implications of funding the war effort and the need to pay Jean’s ransom – some 3,000,000 crowns. A Castilian civil war provided a solution to this problem and the opportunity for Charles V (King of France after his father’s death in 1364) to establish an ally on the southern border of the principality of Aquitaine, an ally who also controlled the most powerful galley fleet operating in northern European waters.

Silent In The Grave by Deanna Raybourn
The Prisoner of Heaven: A Novel by Carlos Ruiz Zafon
The Black Cadillac by Ryan P. Ruiz
For One Night Only by Luxie Ryder
The Trail to Buddha's Mirror by Don Winslow
Mrs. Jeffries Rocks the Boat by Emily Brightwell
Plastic Jesus by Poppy Z. Brite
Esta noche, la libertad by Dominique Lapierre y Larry Collins
The Nowhere Men by Calvin, Michael
The Holly Project by K.A. Sterritt