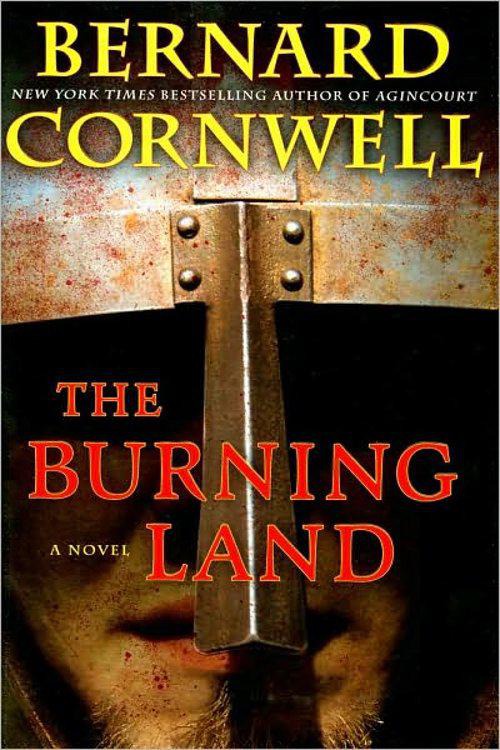 The Burning Land
is for
Alan and Jan Rust

The spelling of place names in Anglo Saxon England was an uncertain business, with no consistency and no agreement even about the name itself. Thus London was variously rendered as Lundonia, Lundenberg, Lundenne, Lundene, Lundenwic, Lundenceaster and Lundres. Doubtless some readers will prefer other versions of the names listed below, but I have usually employed whichever spelling is cited in either the
Oxford Dictionary of English Place-Names
or the newer
Cambridge Dictionary of English Place-Names
for the years nearest or contained within Alfred’s reign, 871–899 AD, but even that solution is not foolproof. Hayling Island, in 956, was written as both Heilincigae and Hæglingaiggæ. Nor have I been consistent myself; I have preferred the modern form Northumbria to Nor hymbralond to avoid the suggestion that the boundaries of the ancient kingdom coincide with those of the modern county. So this list, like the spellings themselves, is capricious.

Not long ago I was in some monastery. I forget where except that it was in the lands that were once Mercia. I was traveling home with a dozen men, it was a wet winter’s day, and all we needed was shelter, food, and warmth, but the monks behaved as though a band of Norsemen had arrived at their gate. Uhtred of Bebbanburg was within their walls and such is my reputation that they expected me to start slaughtering them. “I just want bread,” I finally made them understand, “cheese if you have it, and some ale.” I threw money on the hall floor. “Bread, cheese, ale, and a warm bed. Nothing more!”

Next morning it was raining like the world was ending and so I waited until the wind and weather had done their worst. I roamed the monastery and eventually found myself in a dank corridor where three miserable-looking monks were copying manuscripts. An older monk, white-haired, sour-faced and resentful, supervised them. He wore a fur stole over his habit, and had a leather quirt with which he doubtless encouraged the industry of the three copyists. “They should not be disturbed, lord,” he dared to chide me. He sat on a stool beside a brazier, the warmth of which did not reach the three scribblers.

“The latrines haven’t been licked clean,” I told him, “and you look idle.”

So the older monk went quiet and I looked over the shoulders of the ink-stained copyists. One, a slack-faced youth with fat lips and a fatter goiter on his neck, was transcribing a life of Saint Ciaran, which told how a wolf, a badger, and a fox had helped build a
church in Ireland, and if the young monk believed that nonsense then he was as big a fool as he looked. The second was doing something useful by copying a land grant, though in all probability it was a forgery. Monasteries are adept at inventing old land grants, proving that some ancient half-forgotten king has granted the church a rich estate, thus forcing the rightful owner to either yield the ground or pay a vast sum in compensation. They tried it on me once. A priest brought the documents and I pissed on them, and then I posted twenty sword-warriors on the disputed land and sent word to the bishop that he could come and take it whenever he wished. He never did. Folk tell their children that success lies in working hard and being thrifty, but that is as much nonsense as supposing that a badger, a fox, and a wolf could build a church. The way to wealth is to become a Christian bishop or a monastery’s abbot and thus be imbued with heaven’s permission to lie, cheat, and steal your way to luxury.

The third young man was copying a chronicle. I moved his quill aside so I could see what he had just written. “You can read, lord?” the old monk asked. He made it sound like an innocent inquiry, but the sarcasm was unmistakable.

“‘In this year,’” I read aloud, “‘the pagans again came to Wessex, in great force, a horde as had never been seen before, and they ravaged all the lands, causing mighty distress to God’s people, who, by the grace of Our Lord Jesus Christ, were rescued by the Lord Æthelred of Mercia who came with his army to Fearnhamme, in which place he did utterly destroy the heathen.’” I prodded the text with a finger. “What year did this happen?” I asked the copyist.

“So what is this?” I asked, flicking the pages of the parchment from which he copied.

“They are annals,” the elderly monk answered for the younger man, “the Annals of Mercia. That is the only copy, lord, and we are making another.”

I looked back at the freshly written page. “Æthelred rescued Wessex?” I asked indignantly.

“God?” I snarled. “It was with my help! I fought that battle, not Æthelred!” None of the monks spoke. They just stared at me. One of my men came to the cloister end of the passageway and leaned there, a grin on his half-toothless face. “I was at Fearnhamme!” I added, then snatched up the only copy of the Annals of Mercia and turned its stiff pages. Æthelred, Æthelred, Æthelred, and not a mention of Uhtred, hardly a mention of Alfred, no Æthelflæd, just Æthelred. I turned to the page which told of the events after Fearnhamme. “‘And in this year,’” I read aloud, “‘by God’s good grace, the lord Æthelred and the Ætheling Edward led the men of Mercia to Beamfleot where Æthelred took great plunder and made mighty slaughter of the pagans.’” I looked at the older monk. “Æthelred and Edward led that army?”

“So it is said, lord.” He spoke nervously, his earlier defiance completely gone.

“I led them, you bastard,” I said. I snatched up the copied pages and took both them and the original annals to the brazier.

“No!” the older man protested.

He held up a placatory hand. “For forty years, lord,” he said humbly, “those records have been compiled and preserved. They are the tale of our people! That is the only copy!”

“They’re lies,” I said again. “I was there. I was on the hill at Fearnhamme and in the ditch at Beamfleot. Were you there?”

He gave an appalled shriek when I tossed the manuscripts onto the brazier. He tried to rescue the parchments, but I knocked his hand away. “I was there,” I said again, staring at the blackening sheets that curled and crackled before the fire flared bright at their edges. “I was there.”

“If you want to know what happened,” I said, “then come to me in Bebbanburg and I’ll tell you the truth.”

They never came. Of course they did not come.

But I was at Fearnhamme, and that was just the beginning of the tale.

Morning, and I was young, and the sea was a shimmer of silver and pink beneath wisps of mist that obscured the coasts. To my south was Cent, to my north lay East Anglia, and behind me was Lundene, while ahead the sun was rising to gild the few small clouds that stretched across the dawn’s bright sky.

We were in the estuary of the Temes. My ship, the
Seolferwulf
, was newly built and she leaked, as new ships will. Frisian craftsmen had made her from oak timbers that were unusually pale, and thus her name, the
Silverwolf
. Behind me were the
Kenelm
, named by King Alfred for some murdered saint, and the
Dragon-Voyager
, a ship we had taken from the Danes.
Dragon-Voyager
was a beauty, built as only the Danes could build. A sleek killer of a ship, docile to handle yet lethal in battle.

Seolferwulf
was also a beauty; long-keeled, wide-beamed, and high-prowed. I had paid for her myself, giving gold to Frisian shipwrights, and watching as her ribs grew and as her planking made a skin and as her proud bow reared above the slipway. On that prow was a wolf’s head, carved from oak and painted white with a red lolling tongue and red eyes and yellow fangs. Bishop Erkenwald, who ruled Lundene, had chided me, saying I should have named the ship for some Christian milksop saint, and he had presented me with a crucifix that he wanted me to nail to
Seolferwulf
’s mast, but instead I burned the wooden god and his wooden cross and mixed their ashes with crushed apples, that I fed to my two sows. I worship Thor.

Now, on that distant morning when I was still young, we rowed eastward on that pink and silver sea. My wolf’s-head prow was decorated with a thick-leaved bough of oak to show we intended no harm to our enemies, though my men were still dressed in mail and had shields and weapons close to their oars. Finan, my second in command, crouched near me on the steering platform and listened with amusement to Father Willibald, who was talking too much. “Other Danes have received Christ’s mercy, Lord Uhtred,” he said. He had been spouting this nonsense ever since we had left Lundene, but I endured it because I liked Willibald. He was an eager, hardworking, and cheerful man. “With God’s good help,” he went on, “we shall spread the light of Christ among these heathen!”

The Wisdom of the Radish by Lynda Browning
Bloodsong by Eden Bradley
No Woman No Cry by Rita Marley
The Forgotten Map by Cameron Stelzer
Her Favoured Captain by Francine Howarth
Brownies by Eileen Wilks
Sunflowers by Sheramy Bundrick
Foreign Correspondence by Geraldine Brooks
The Roses Underneath by Yetmen, C.F.
Love In A Nick Of Time by Smith, Stephanie Jean