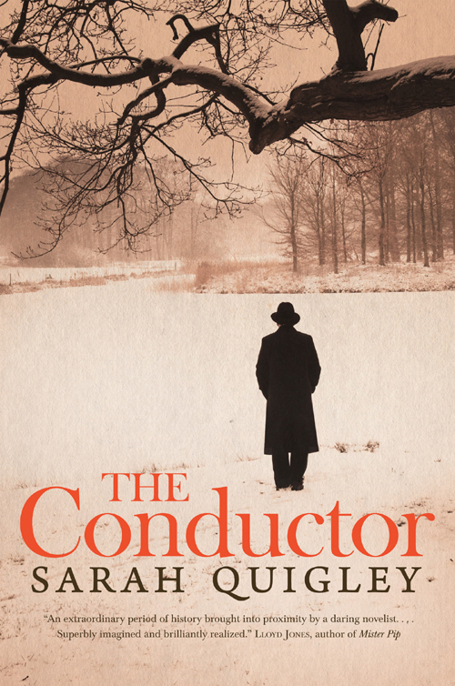 The knock at the door

The price of furniture

At the fish market

The Cossack and the dead boy

Brandy, talk and the twelfth of July

The truth about Nina Varzar

The secretive nature of the Elias men

She will not go

The night of fire

A kind of retreat

What is the worst

I
was born without a heart.

At least, that’s what they believe. I hear what they say about me in rehearsals. They have little enough breath to make music — whether I coax and implore, or shout like thunder, it makes no difference. But when they whisper about me, their voices sound through the hall as loudly as pickaxes on ice.

Conductors are supposed to stand apart. It’s part of the task, the privilege, the burden. Being separate is only one small step away from being disliked. I don’t mind. To be more specific, I can’t mind. These days, I have no energy for the luxury of taking offence. They may say what they like about my beaked nose, my thin lips, my unfashionable spectacles. They may joke about my insistence on punctuality. Surely, in all my harshness, I must be related to the great leader of our feared regime! (They’ve become used to mouthing such lines behind their hands, fearing that Stalin’s men are listening at the door.) Or perhaps — and this is said more loudly — my inimical nature is more similar to that of Hitler, our country’s greatest enemy. I hear these comparisons, and I find them tedious but unsurprising. Ever since my career began I’ve been accused of being strict, overly exacting, hostile — and, yes, dictatorial.

What can I not allow my musicians to see? That once, I, Karl Illyyich Eliasberg, was as emotional as any man. That on a long-ago June day, when the bright dust hung in the air like long quivering curtains, and the tall windows stood open, and sunlight filled the marble atrium, I stood for a long time on the curved staircase of the Conservatoire. As I listened, my heart split wide open. With jealousy, with admiration, with love.

My adversary, my friend. Over the years, I’ve thought of him as both. It’s because of him that I stand here today: talked of, despised, assumed to be a heartless man. Had I the strength to do so, I would laugh at the irony of it. Of course I have no heart! Many years ago, in that Leningrad stairwell, I gave my heart to Shostakovich.

The knock at the door

I
t seemed he’d been waiting all his life for the knock at the door. He heard it dimly when he slept, tapping on the surface of his dreams. He heard it when he was working, in the urgent roll of timpani or the sharp plucking of pizzicato strings. And he heard it in the sound of his own footsteps when he walked the streets, so that even when hurrying he could never escape it.

The dread followed him day and night like a stubborn stray dog.
Shostakovich! Shostakovich!
Was someone calling his name? He struggled to open his eyes. The room was blurred at the edges of his vision, with a bright glare in the centre where he knew the work table to be.

‘Nina?’ he called, but his voice was still clogged with half-remembered dreams.

He reached blindly for his glasses, patting the mattress and then the low stool beside the bed. It was an effort to lift his arm; his fingers felt limp and without their usual strength. He’d worked late and eaten nothing over the past twenty-four hours, except for some hard rye bread soaked in tea. The good thing about hunger and extreme tiredness was that they alleviated fear. The sound that woke him — had it been the knock? If he were taken now, he would almost be relieved.

His fingers found the steel arms of his glasses, then the reassuring curve of the rims. He pushed aside the rough grey blanket — supposedly a privilege. But even privilege could make your skin itch.

With his glasses on, the wavering whiteness shrank to nothing. The
shabby walls stood back, the room held its breath. Now he wasn’t sure what he’d heard: someone in the street? Or simply the
rap rap
of the loose window in its frame?

‘Nina?’ he called again. He swung his legs over the edge of the bed, ran his hand through his hair, shuffled to the door.

But when he looked cautiously into the outer room, he found it was empty.

D
ownstairs, in the communal kitchen, a naked light bulb. He bumped his head on it, as always, and swore. The reek of cleaning fluid, cabbage and cheap cutlets made him nauseous. He clamped his fingers over his nose, and breathed ostentatiously through his mouth as he mixed his porridge, though there was no one there to watch his theatrics. He was thankful for this. He’d never liked talking much before midday, and hated hearing, even from the stairs, the racket of several spirit stoves going at once, and voices drilling into his early-morning head. (However indifferent Nina seemed, however closed off to his suffering, at least she never sounded like a fishwife!)

As he leaned on the table, wiping a smear of dust from his glasses, he heard a noise behind him. Small cat-like feet, snuffling breath. Glancing backwards, he saw a cracked pair of overshoes, a skinny pair of ankles.

He sighed. Whenever he’d let the stove upstairs go out and was forced to venture down here, unless he was as quiet as the spring grass growing, he had to face this ordeal.

‘Ahhhh, Mr Shostakovich!’ There was, as usual, unholy satisfaction in the greeting. ‘I could tell from the footsteps bumbling over my ceiling that it was you.’

‘Irina Barinova!’ He tried to sound as if he’d been lost in his own world. This was, after all, the behaviour she wanted to see in him: an artistic vagueness rendering him useless as a neighbour and a human being. ‘A very good morning to you.’

‘Good morning?’ repeated Irina Barinova, managing to sound both
reflective and sharp. ‘Is it still morning?’ Her voice rose, and so did her wizened hand, floating up to the front of her frayed green cardigan (it was far more genteel to patch old clothes than to buy garish new ones). She rummaged inside her dress. ‘Ahhhh,’ she said again, and this time the triumph was unmistakable, cutting a path through the steamy air. ‘In
fact
, Mr Shostakovich, it is already afternoon.’

He bit his tongue with irritation and tasted blood. ‘Shit,’ he muttered. He watched silently as old Irina Barinova displayed, with slightly shaking hands, her father’s gold watch, a reminder of better days.

‘Goodness!’ he said. ‘Is it really afternoon! No wonder our stove had gone out by the time I woke up.’

Irina shovelled the heavy watch and chain back into her sprigged cotton dress. The slipping of the links, the slow inexorable disappearing, reminded Shostakovich of a boat casting off its moorings. And again, with a lurch of his stomach, he thought:
Where’s Nina?

‘You’ve been burning the midnight oil, I expect,’ said Irina. ‘What it must be to have genius.’ Now that she’d exposed him as a shameless bohemian, a no-good father and a husband who let the family stove go cold, she became flattering. It was all part of the routine.

Get on with the show
, thought Shostakovich. He longed to leave, but his stomach was empty and his porridge had not yet boiled.

Irina looked at him almost coyly from under white eyelashes. ‘To think that Dmitri Shostakovich should be living in my house. Leningrad’s most famous son, living here, under the roof of my dear deceased father.’

Shostakovich ducked his head. This sort of talk made his stomach twist.

‘All this.’ She waved a twig-like arm. ‘Once, it all belonged to my father — from the attic to the basement.’

‘Yes, I know. You’ve told me that three hundred and sixty-five days of the year, for as many years as a donkey’s ears are long.’ He stabbed the porridge with the wooden spoon.

‘Once we had maids and cooks.’ Irina sighed heavily. ‘Now it’s a house full of strangers.’

Shostakovich stared at the porridge, willing bubbles to appear.

‘Speaking of maids,’ said Irina, swooping swiftly back to the present, ‘where is your Fenya? I haven’t seen her for days.’

‘Fenya is visiting her parents.’ He whipped the pan off the stove. Suddenly undercooked oats seemed immensely appealing. ‘Therefore I make my own porridge!’

‘Well, what about Nina? How is dear Nina?’

Shostakovich dropped the spoon, and porridge splattered over his shirt-front.

‘I saw her going out early this morning,’ mused Irina. ‘With the children. I believe they were carrying travelling bags. Perhaps they’re also visiting relations?’

Shostakovich skirted around the table, knocking his head once more on the light bulb. For a small person, Irina Barinova was remarkably adept at blocking escape routes. ‘You really must excuse me.’ He gestured, slightly wildly, with his saucepan. ‘Nothing worse than cold porridge for breakfast.’

‘Breakfast?’ Irina raised her wizened hand once more to her breast. ‘My father was washed and shaved, and had taken a turn around the park before his breakfast, which was served in the red room at eight o’clock sharp.’

He took the stairs two at a time. The empty apartment was no longer unsettling; it was bliss. Standing by the old wooden table, he shovelled the porridge straight from the pan into his mouth. He poured cold water onto strong cold tea, and threw in half a spoonful of honey that fell like a stone to the bottom of the glass. God, he was starving. He was thirsty. He had to start thinking about work.

Halfway through his second bowl, he saw the note lying on the floor. It was smeared with dust from being pushed under the door, but his name was legible, written in a familiar hand. He walked to the window to read it, continuing to shovel lukewarm mush into his mouth. Put down the bowl, the spoon, with twin clatters. Gulped the last dregs of tea. Pulled on his boots, hat with ear-flaps, a patched coat — and left the house.

The Prize in the Game by Walton, Jo
The Truth Is the Light by Vanessa Davie Griggs
Love is Murder by Sandra Brown
Vigilante by Cannell, Stephen J.
The Problem With Black Magic by Karen Mead
Out of Control (Untamed #2) by Jinsey Reese, Victoria Green
Split by Swati Avasthi
The Guardians of Sol by Spencer Kettenring
Deadlocked 6 by Wise, A.R.
Prisoner's Base by Rex Stout