The Creation of Anne Boleyn 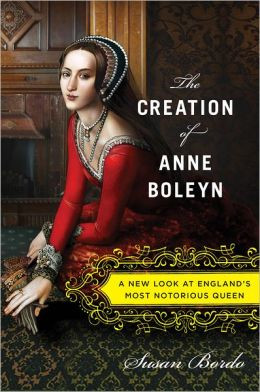 Introduction: The Erasure of Anne Boleyn and the Creation of "Anne Boleyn"

The Tower and the Scaffold

Henry: How Could He Do It?

Postwar: Domestic Trouble in the House of Tudor

PART III: An Anne for All Seasons

It’s the Anne That Makes the Movie: Anne of the Thousand Days

Anne Gets the Last Word (for Now)

The creation of Anne Boleyn : a new look at England’s most notorious queen / Susan Bordo.

Introduction: The Erasure of Anne Boleyn and the Creation of “Anne Boleyn”

F
OR ANNE, THE ARREST
was sudden and inexplicable. At the end of April 1536, the king, by all outward appearances, was planning a trip with her to Calais on May 4, just after the May Day celebrations. She had no idea that at the same time the trip was being organized, the Privy Council had been informed of planned judicial proceedings against her, on charges of adultery and treason. Her husband was a genius at keeping his true intentions hidden. He had it down to an art: the arm round the shoulder, the intimate conversations, the warm gestures of affection and reassurance. And then, without warning, abandonment—or worse. It had happened with his longtime counselor and second Lord Chancellor, Thomas Wolsey, who saw him ride off one morning with promises of a friendly conversation that never happened. More famously, it had happened with Thomas More, whose intellect Henry had once valued above any other man’s and whose conscience he had pledged to honor, then punished with death. This time, however, Henry’s turnabout was not only fatal but also unprecedented. For the first time in English history, a queen was about to be executed. And, if Henry had gotten his way, written out of his memory—and history.

Even before the execution, Henry had begun the business of attempting to erase Anne Boleyn’s life and death from the recorded legacy of his reign. On May 18, the day before Anne’s execution, Thomas Cromwell, aware of rumors that people were beginning to question the justice of the verdict and concerned that foreign ambassadors might write home sympathetic accounts of Anne’s last moments, ordered William Kingston, constable of the Tower of London, to “have strangerys conveyed yowt of the Towre.”
1
Kingston carried out the order and assured Cromwell that only a “reasonable number” of witnesses would be there, to testify that justice had been done.
2
In fact, by the time of the execution, delayed still further due to the late arrival of the executioner from Calais, there were more than a thousand spectators. For unknown reasons and despite Cromwell’s orders, the Tower gates had been left open, and Londoners and “strangerys” alike streamed in.

As Anne prepared for her death, distraught over the delays, which she feared would weaken her resolve to bravely face the executioner, Henry was spending much of his time at Chelsea, visiting his future bride Jane Seymour and making plans for their wedding. He was eager to remarry as quickly as possible. But first he had to eradicate Anne. Even before the call sounded her death, dozens of carpenters, stonemasons, and seamstresses had been hard and hastily at work at Hampton Court, instructed to remove all signs of Anne’s queenship: her initials, her emblems, her mottoes, and the numerous carved, entwined H’s and A’s strewn throughout the walls and ceiling of the Great Hall. Similar activities were going on at other royal residences. Henry was determined to start afresh with his new wife. Sometimes, the alterations were easy. Anne’s leopard emblem became Jane’s panther with clever adjustments to the head and tail. Various inscriptions to “Queen Anne” could be painted over and replaced with “Queen Jane.” He got rid of her portraits. He (apparently) destroyed her letters. But the task of erasing Anne was an enormous one, since even before they were married, Henry had aggressively enthroned her symbolically in every nook and cranny of his official residences. Not surprisingly, especially since Henry wanted it done with such speed, many H’s and A’s were overlooked by Henry’s revisionist workmen. Today, even the guides who provide information to visitors at Hampton Court are not sure how many there are.

Researching this book has been a lot like standing in the middle of that Great Hall at Hampton Court, squinting my eyes, trying to find unnoticed or “escaped” bits of Anne, dwarfed but still discernible within the monuments of created myths, legends, and images. In part because of Henry’s purge, very little exists in Anne’s own words or indisputably depicts what she did or said. Although seventeen of his love letters to her escaped the revision, having been stolen earlier and spirited away to the Vatican, only two letters that may be from Anne to Henry remain, and one is almost certainly inauthentic. Beyond these and some inscriptions in prayer books, most of our information about Anne’s personality and behavior is secondhand: George Cavendish’s “biography” of Cardinal Wolsey, which credits Anne with Wolsey’s downfall; the gossipy, malicious reports of Eustace Chapuys and other foreign ambassadors to their home rulers, Constable Kingston’s descriptions of her behavior in the Tower, and various “eyewitness” accounts of what she said and did at her trial and execution. Since Henry destroyed all the portraits he could lay his hands on, it’s even difficult to determine what Anne actually looked like. Later artistic depictions, all of them copies and only a few believed to be copies of originals done from actual sittings, are wildly inconsistent with one another, from the shape of her face to the color of her hair, and her looks, as described by her contemporaries, range from deformed to “not bad-looking” to “rivaling Venus.” Whether or not these portraits are actually of Anne is a source of constant debate among historians and art historians.

You might expect Anne to be resuscitated today at the various historical sites associated with Henry’s reign, but, in fact, she’s not very prominent there either. In the gift shops, thimbles, small chocolates, and tiny soaps “commemorate” Henry’s wives democratically. Everything is in sets of six, each wife given equal billing among the tiny trinkets, as though they were members of a harem. The “and his six” view of the wives is everywhere in Britain. Yet despite the “all wives are equal” spin of Hampton Court and the Tower of London, and despite the absence of Anne’s own voice and image among the relics of the period, she is undoubtedly the most famous of Henry’s wives. Ask any random person who Katherine of Aragon, Anne of Cleves, Katherine Howard, or Katherine Parr were, and you probably won’t even get an attempt to scan stored mental information. The name “Jane Seymour” will probably register as the apparently ageless actress well-known for Lifetime movies and ads for heart-shaped jewelry. But Anne Boleyn, at the very least, is remembered as “the one who had her head chopped off.”
3

Henry may have tried to erase her, but Anne Boleyn looms large in our cultural imagination. Everyone has some tidbit of Anne mythology to pull out: “She slept with hundreds of men, didn’t she?” (I heard that one from a classical scholar.) “She had six fingers—or was it three nipples?” (From a French-literature expert.) “She had sex with her own brother.” (From anyone who has learned their history at the foot of Philippa Gregory.) She has been the focus of numerous biographies, several movies, and a glut of historical fiction—
Murder Most Royal, The Secret Diary of Anne Boleyn, The Lady in the Tower, The Other Boleyn Girl, Mademoiselle Boleyn, A Lady Raised High, The Concubine, Brief Gaudy Hour—
which, thanks to Showtime’s
The Tudors,
have multiplied over the last several years. (By a 2012 count on Amazon, more than fifty biographies, novelizations, or studies were published in the preceding five years alone; and that’s without considering electronic editions, reprints of Henry’s love letters, or Tudor books within which Anne is a central, though not main, focus.) Anne has also become a thriving commercial concern (Halloween costumes, sweatshirts, coffee cups, magnets, bumper stickers). Internet sites are devoted to her, and feminist art deconstructs her demise.

My own obsession with Anne began early in 2007, with an e-mail from England sent by a young journalist looking for a feminist to coauthor a book with him. The book was to be about famous women and their pursuit of pleasure, in defiance of the rules and restrictions of their cultures. In the original plan, Anne Boleyn was to be one of many, from Cleopatra to Queen Latifah. Uncommitted but curious, I started casually reading about Anne. And found I couldn’t stop. It was a total gorge. I consumed Boleyn voraciously, sometimes several books a week, one after another, as if I were chain-smoking. I rented movies and documentaries, read all the popular histories, delved into all the scholarly debates, and discovered the thriving industry in Tudor fiction. I gobbled them like candy. My lust for Boleyniana was right up there with Cherry Ames, Student Nurse (fourth grade), James Bond (college), Sylvia Plath bios (graduate school), and O. J. Simpson and JonBenét Ramsey (pop culture critic). And in the end, she became the only woman on our list whom I wanted to write about, and researching her life and how it has been represented has consumed me for the past six years.

Why is Anne Boleyn so fascinating? Maybe we don’t have to go any further than the obvious: The story of her rise and fall is as elementally satisfying—and scriptwise, not very different from—a Lifetime movie: a long-suffering, postmenopausal wife; an unfaithful husband and a clandestine affair with a younger, sexier woman; a moment of glory for the mistress; then lust turned to loathing, plotting, and murder as the cycle comes full circle. As Irene Goodman writes, “Anne’s life was not just an important historical event. It was also the stuff of juicy tabloid stories . . . It has sex, adultery, pregnancy, scandal, divorce, royalty, glitterati, religious quarrels, and larger-than-life personalities. If Anne lived today, she would have been the subject of lurid tabloid headlines:
RANDY KING DUMPS HAG FOR TROPHY WIFE
.”
4

But Anne hasn’t always been seen as a skanky schemer. For supporters of Katherine of Aragon, she was worse: a coldhearted murderess. For Catholic propagandists such as Nicholas Sander, she was a six-fingered, jaundiced-looking erotomaniac who slept with butlers, chaplains, and half of the French court. For Elizabethan admirers, she was the unsung heroine of the Protestant Reformation. For the Romantics, particularly in painting, she was the hapless victim of a king’s tyranny—a view that gets taken up in the earliest film versions of Anne, Ernst Lubitsch’s silent
Anna Boleyn
and Alexander Korda’s
The Private Life of Henry VIII.
In postwar movies and on television, Anne has been animated by the rebellious spirit of the sixties (
Anne of the Thousand Days
), the “mean girl” and “power feminist” celebration of female aggression and competitiveness of the nineties (
The Other Boleyn Girl
), and the third-wave feminism of a new generation of Anne worshippers, inspired by Natalie Dormer’s brainy seductress of
The Tudors
to see in Anne a woman too smart, sexy, and strong for her own time, unfairly vilified for her defiance of sixteenth-century norms of wifely obedience and silence. Henry may have tried to write his second wife out of history, but “Anne Boleyn” has been too strong for him, in the many guises she has assumed over the centuries.

Burden Of Blood by Hulsey, Wenona
Listening in the Dusk by Celia Fremlin
Mistletoe Courtship by Janet Tronstad
Drummer Boy by Toni Sheridan
Come to Me Quietly (Closer to You) by Jackson, A. L.
Sidney’s Triple Shot [Apache Crossing] (Siren Publishing Ménage Amour) by Lori King
A Denial of Death by Gin Jones
How to Punish Your Playboy (DommeNation #3) by Mina Vaughn
Trap House by Salaam, Sa'id
Bad Behavior #1: Tales of an American Gigolo by Childers Lewis