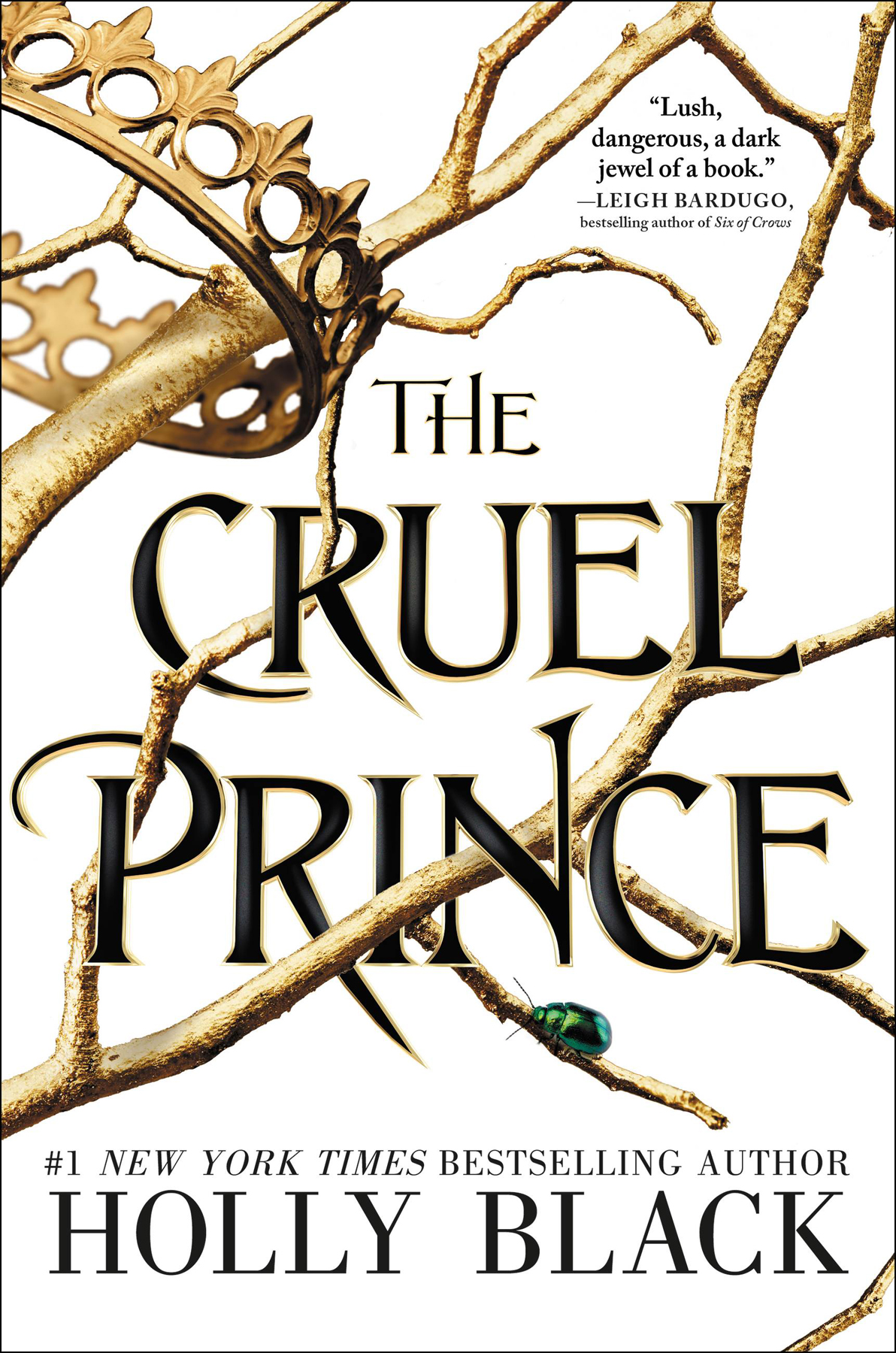 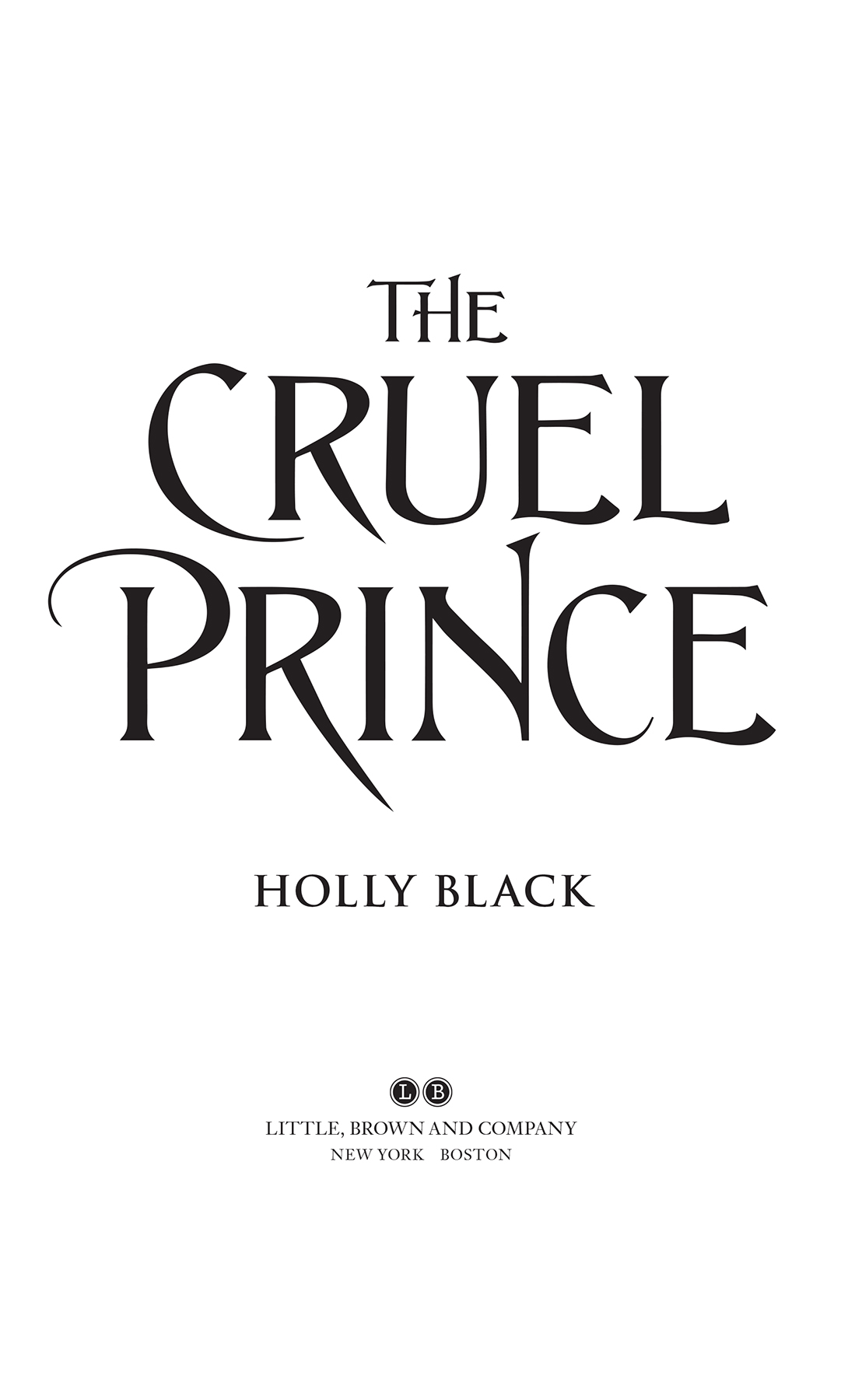 Hachette Book Group supports the right to free expression and the value of copyright. The purpose of copyright is to encourage writers and artists to produce the creative works that enrich our culture.

The scanning, uploading, and distribution of this book without permission is a theft of the author's intellectual property. If you would like permission to use material from the book (other than for review purposes), please contact [email protected] Thank you for your support of the author's rights.

Little, Brown and Company is a division of Hachette Book Group, Inc.

The Little, Brown name and logo are trademarks of Hachette Book Group, Inc.

Description: First edition. | New York : Little, Brown and Company, 2018. | Series: The Folk of the Air ; 1 | Summary: Jude, seventeen and mortal, gets tangled in palace intrigues while trying to win a place in the treacherous High Court of Faerie, where she and her sisters have lived for a decade.

For Cassandra Clare, who was finally lured into Faerieland 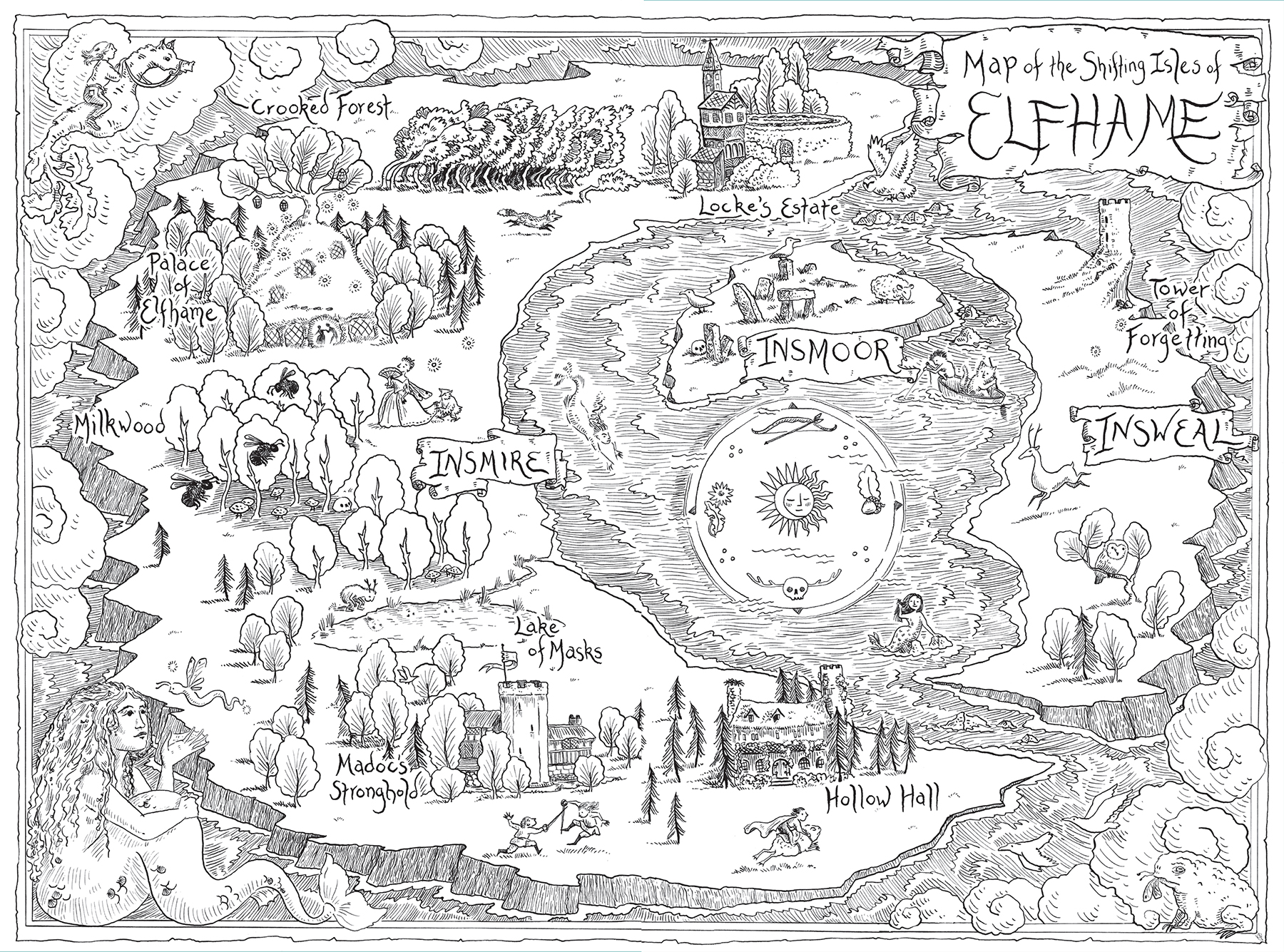 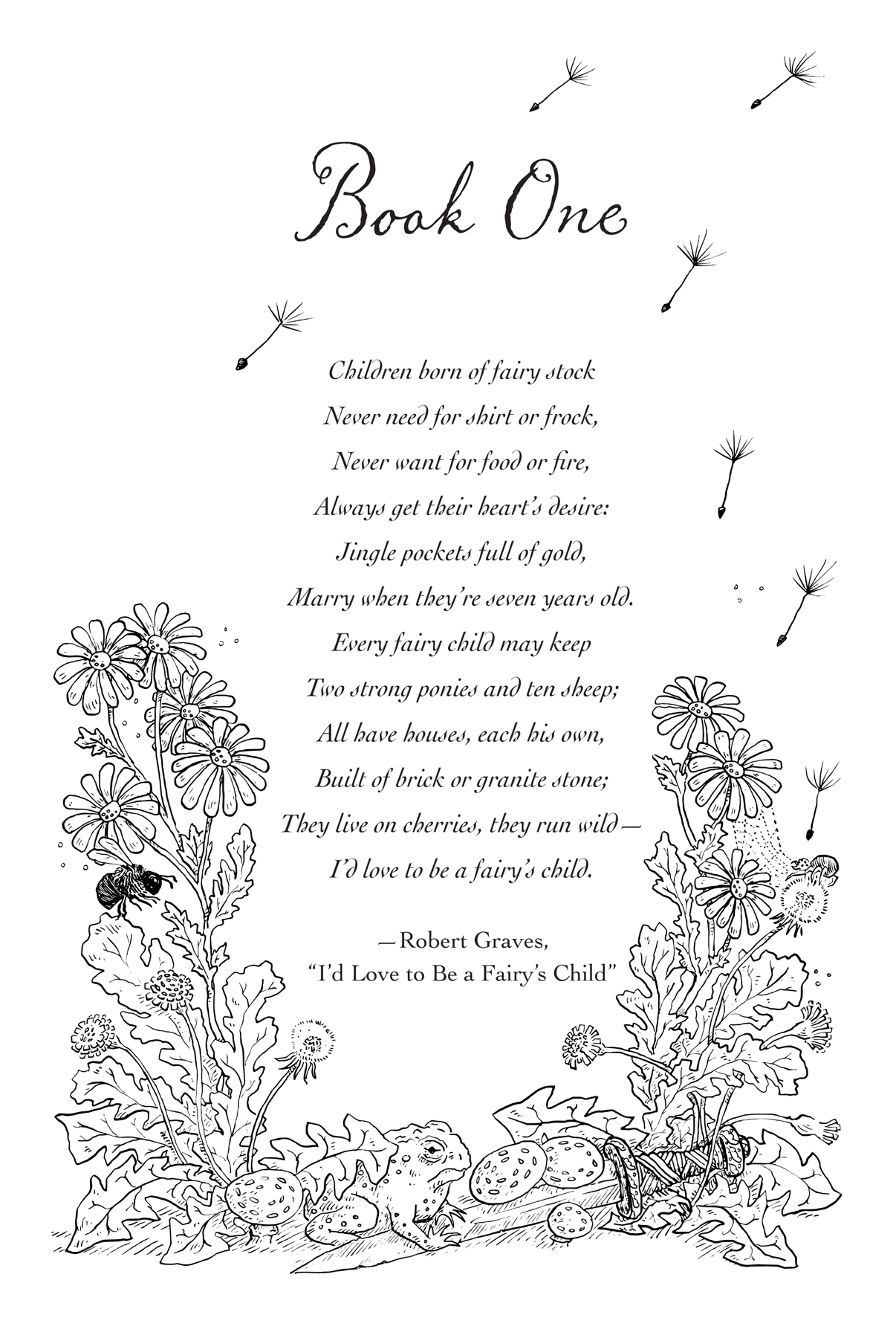 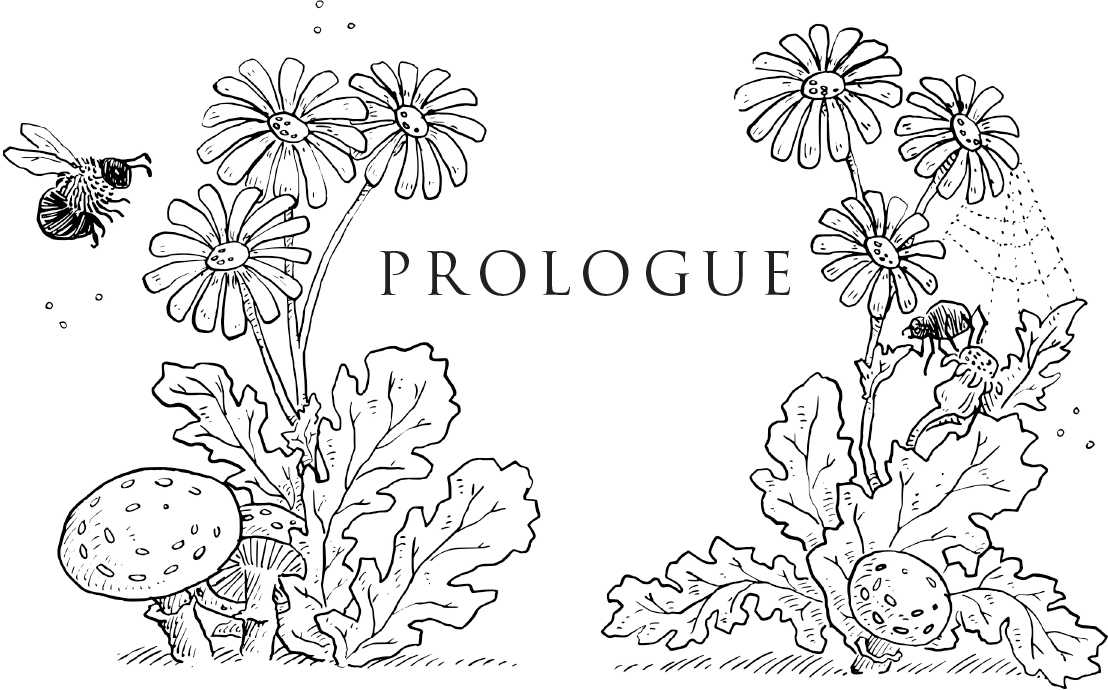 O
n a drowsy Sunday afternoon, a man in a long dark coat hesitated in front of a house on a tree-lined street. He hadn't parked a car, nor had he come by taxi. No neighbor had seen him strolling along the sidewalk. He simply appeared, as if stepping between one shadow and the next.

The man walked to the door and lifted his fist to knock.

Inside the house, Jude sat on the living room rug and ate fish sticks, soggy from the microwave and dragged through a sludge of ketchup. Her twin sister, Taryn, napped on the couch, curled around a blanket, thumb in her fruit-punch-stained mouth. And on the other end of the sofa, their older sister, Vivienne, stared at the television screen, her eerie, split-pupiled gaze fixed on the cartoon mouse as it ran from the cartoon cat. She laughed when it seemed as if the mouse was about to get eaten.

Vivi was different from other big sisters, but since seven-year-old Jude and Taryn were identical, with the same shaggy brown hair and heart-shaped faces, they were different, too. Vivi's eyes and the lightly furred points of her ears were, to Jude, not so much more strange than being the mirror version of another person.

And if sometimes she noticed the way the neighborhood kids avoided Vivi or the way their parents talked about her in low, worried voices, Jude didn't think it was anything important. Grown-ups were always worried, always whispering.

Taryn yawned and stretched, pressing her cheek against Vivi's knee.

Outside, the sun was shining, scorching the asphalt of driveways. Lawn mower engines whirred, and children splashed in backyard pools. Dad was in the outbuilding, where he had a forge. Mom was in the kitchen cooking hamburgers. Everything was boring. Everything was fine.

When the knock came, Jude hopped up to answer it. She hoped it might be one of the girls from across the street, wanting to play video games or inviting her for an after-dinner swim.

The tall man stood on their mat, glaring down at her. He wore a brown leather duster despite the heat. His shoes were shod with silver, and they rang hollowly as he stepped over the threshold. Jude looked up into his shadowed face and shivered.

Her mother came from the kitchen, wiping wet hands on her jeans. When she saw the man, she went pale. “Go to your room,” she told Jude in a scary voice.
“Now!”

“Whose child is that?” the man asked, pointing at her. His voice was oddly accented. “Yours? His?”

That wasn't right. Jude and Taryn looked just like their dad. Everyone said so. She took a few steps toward the stairs but didn't want to be alone in her room.
Vivi
, Jude thought.
Vivi will know who the tall man is. Vivi will know what to do.

But Jude couldn't seem to make herself move any farther.

“I've seen many impossible things,” the man said. “I have seen the acorn before the oak. I have seen the spark before the flame. But never have I seen such as this: A dead woman living. A child born from nothing.”

Mom seemed at a loss for words. Her body was vibrating with tension. Jude wanted to take her hand and squeeze it, but she didn't dare.

“I doubted Balekin when he told me I'd find you here,” said the man, his voice softening. “The bones of an earthly woman and her unborn child in the burned remains of my estate were convincing. Do you know what it is to return from battle to find your wife dead, your only heir with her? To find your life reduced to ash?”

Mom shook her head, not as if she was answering him, but as though she was trying to shake off the words.

He took a step toward her, and she took a step back. There was something wrong with the tall man's leg. He moved stiffly, as though it hurt him. The light was different in the entry hall, and Jude could see the odd green tint of his skin and the way his lower teeth seemed too large for his mouth.

She was able to see that his eyes were like Vivi's.

“I was never going to be happy with you,” Mom told him. “Your world isn't for people like me.”

The tall man regarded her for a long moment. “You made vows,” he said finally.

She lifted her chin. “And then I renounced them.”

His gaze went to Jude, and his expression hardened. “What is a promise from a mortal wife worth? I suppose I have my answer.”

Mom turned. At her mother's look, Jude dashed into the living room.

Taryn was still sleeping. The television was still on. Vivienne looked up with half-lidded cat eyes. “Who's at the door?” she asked. “I heard arguing.”

“A scary man,” Jude told her, out of breath even though she'd barely run at all. Her heart was pounding. “We're supposed to go upstairs.”

She didn't care that Mom had told only
her
to go upstairs. She wasn't going by herself. With a sigh, Vivi unfolded from the couch and shook Taryn awake. Drowsily, Jude's twin followed them into the hallway.

As they started toward the carpet-covered steps, Jude saw her father come in from the back garden. He held an axe in his handâforged to be a near replica of one he'd studied in a museum in Iceland. It wasn't weird to see Dad with an axe. He and his friends were into old weapons and would spend lots of time talking about “material culture” and sketching ideas for fantastical blades. What was odd was the way he held the weapon, as if he was going toâ

Her father swung the axe toward the tall man.

He had never raised a hand to discipline Jude or her sisters, even when they got into big trouble. He wouldn't hurt anyone. He just wouldn't.

And yet. And yet.

The axe went past the tall man, biting into the wood trim of the door.

Taryn made an odd, high keening noise and slapped her palms over her mouth.

The tall man drew a curved blade from beneath his leather coat. A
sword
, like from a storybook. Dad was trying to pull the axe free from the doorframe when the man plunged the sword into Dad's stomach, pushing it upward. There was a sound, like sticks snapping, and an animal cry. Dad fell to the vestibule carpet, the one Mom always yelled about when they tracked mud on it.

The rug that was turning red.

Mom screamed. Jude screamed. Taryn and Vivi screamed. Everyone seemed to be screaming, except the tall man.

“Do not run from me,” the man told her. “Not after what you've done. If you run again, I swear Iâ”

But she did run. She was almost around the corner when his blade struck her in the back. She crumpled to the linoleum, falling arms knocking magnets off the fridge.

The smell of fresh blood was heavy in the air, like wet, hot metal. Like those scrubbing pads Mom used to clean the frying pan when stuff was really stuck on.

Jude ran at the man, slamming her fists against his chest, kicking at his legs. She wasn't even scared. She wasn't sure she felt anything at all.

The man paid Jude no mind. For a long moment, he just stood there, as though he couldn't quite believe what he'd done. As though he wished he could take back the last five minutes. Then he sank to one knee and caught hold of Jude's shoulders. He pinned her arms to her sides so she couldn't hit him anymore, but he wasn't even looking at her.

His gaze was on Vivienne.

“No,” Vivi told him in her somber little voice. “I'm never going anywhere with you.”

“I'm your father,” he told her, his voice harsh, rising like the crack of a lash. “You are my heir and my blood, and you will obey me in this as in all things.”

She didn't move, but her jaw set.

“You're not her father,” Jude shouted at the man. Even though he and Vivi had the same eyes, she wouldn't let herself believe it.

His grip tightened on her shoulders, and she made a little squeezed, squeaking sound, but she stared up defiantly. She'd won plenty of staring contests.

He looked away first, turning to watch Taryn, on her knees, shaking Mom while she sobbed, as though she was trying to wake her up. Mom didn't move. Mom and Dad were dead. They were never going to move again.

“I hate you,” Vivi proclaimed to the tall man with a viciousness that Jude was glad of. “I will always hate you. I vow it.”

The man's stony expression didn't change. “Nonetheless, you will come with me. Ready these little humans. Pack light. We ride before dark.”

Vivienne's chin came up. “Leave them alone. If you have to, take me, but not them.”

He stared at Vivi, and then he snorted. “You'd protect your sisters from me, would you? Tell me, then, where would you have them go?”

Vivi didn't answer. They had no grandparents, no living family at all. At least, none they knew.

He looked at Jude again, released her shoulders, and rose to his feet. “They are the progeny of my wife and, thus, my responsibility. I may be cruel, a monster, and a murderer, but I do not shirk my responsibilities. Nor should you shirk yours as the eldest.”

Years later, when Jude told herself the story of what happened, she couldn't recall the part where they packed. Shock seemed to have erased that hour entirely. Somehow Vivi must have found bags, must have put in their favorite picture books and their most beloved toys, along with photographs and pajamas and coats and shirts.

Or maybe Jude had packed for herself. She was never sure.

A black horse was nibbling the grass of the lawn when they went outside. Its eyes were big and soft. Jude wanted to throw her arms around its neck and press her wet face into its silky mane. Before she could, the tall man swung her and then Taryn across the saddle, handling them like baggage rather than children. He put Vivi up behind him.

Jude and her sisters wept the whole way to Faerieland.