He has no idea what I am.

Maybe I don't know, either. Maybe I never let myself find out.

“Prince Dain will make a fine king,” Oriana says, deftly shifting the conversation back to pleasant things. “A coronation means a month of balls. We will need new dresses.” She seems to include Taryn and me in this sweeping statement. “Magnificent ones.”

Madoc nods, smiling his toothy smile. “Yes, yes, as many as you like. I would have you look your finest and dance your hardest.”

I try to breathe slowly, to concentrate on just one thing. The pomegranate seeds on my plate, shining like rubies, wet with venison blood.

After the coronation
, Madoc said. I try to focus on that. It only feels like never.

I'd love to have a Court dress like the ones I have seen in Oriana's wardrobe, opulent patterns intricately stitched on skirts of gold and silver, each as beautiful as the dawn. I focus on that, too.

But then I go too far and imagine myself in that dress, sword at my hip, transformed, a true member of the Court, a knight in the Circle of Falcons. And Cardan watching me from across the room, standing beside the king, laughing at my pretension.

Laughing like he knows this is a fantasy that won't ever be real.

I pinch my leg until pain washes everything away.

“You'll have to wear out the soles of your shoes, just like the rest of us,” Vivi says to me and Taryn. “I bet Oriana's sick with worry that since Madoc encouraged you to dance, she can't stop you. Horror of horrors, you might have a good time.”

Oriana presses her lips together. “That's not fair, nor is it true.”

Vivi rolls her eyes. “If it wasn't true, I couldn't say it.”

“Enough, all of you!” Madoc slams his hand down on the table, making us all jump. “Coronations are a time when many things are possible. Change is coming, and there is no wisdom in crossing me.”

I can't tell if he's talking about Prince Dain or ungrateful daughters or both.

“Are you afraid someone is going to try for the throne?” Taryn asks. Like me, she has been raised on strategy, moves and countermoves, ambushes and upper hands. But unlike me, she has Oriana's talent for asking the question that will steer a conversation toward less rocky shores.

“The Greenbriar line ought to worry, not me,” Madoc says, but he looks pleased to be asked. “Doubtless some of their subjects wish there was no Blood Crown and no High King at all. His heirs ought to be particularly careful that the armies of Faerie are satisfied. A well-seasoned strategist waits for the right opportunity.”

“Only someone with nothing to lose would attack the throne with you there to protect it,” Oriana says primly.

“There's always something left to lose,” Vivi says, and then makes a hideous face at Oak. He giggles.

Oriana reaches for him and then stops herself. Nothing bad is actually happening. And yet I see the gleam in Vivi's cat eyes, and I'm not sure Oriana's wrong to be nervous.

Vivi would like to punish Madoc, but her only power is to be a thorn in his side. Which means occasionally tormenting Oriana through Oak. I know Vivi loves Oakâhe's our brother, after allâbut that doesn't mean she's above teaching him bad things.

Madoc smiles at all of us, now the picture of contentment. I used to think he didn't notice all the currents of tension that ran through the family, but as I get older, I see that barely suppressed conflict doesn't bother him in the least. He likes it just as well as open war. “Perhaps none of our enemies are particularly good strategists.”

“Let's hope not,” Oriana says distractedly, her eyes on Oak, lifting her glass of canary wine.

“Indeed,” says Madoc. “Let's have a toast. To the incompetence of our enemies.”

I pick up my glass and knock it into Taryn's, then drain it to the very dregs.

There's always something left to lose.

I think about that all through the dawn, turning it over in my head. Finally, when I can toss and turn no more, I pull on a robe over my nightgown and go outside into the late-morning sun. Bright as hammered gold, it hurts my eyes when I sit down on a patch of clover near the stables, looking back at the house.

All of this was my mother's before it was Oriana's. Mom must have been young and in love with Madoc back then. I wonder what it was like for her. I wonder if she thought she was going to be happy here.

I wonder when she realized she wasn't.

I have heard the rumors. It is no small thing to confound the High King's general, to sneak out of Faerie with his baby in your belly and hide for almost ten years. She left behind the burned remains of another woman in the blackened husk of his estate. No one can say she didn't prove her toughness. If she'd just been a little luckier, Madoc would have never realized she was still alive.

She had a lot to lose, I guess.

“Skip our lessons today,” I tell Taryn that afternoon. I am dressed and ready early. Though I have not slept, I do not feel at all tired. “Stay home.”

She gives me a look of deep concern as a pixie boy, newly indebted to Madoc, braids her chestnut hair into a crown. She is sitting primly at her dressing table, clad all in brown and gold. “Telling me not to go means I should. Whatever you're thinking, stop. I know you're disappointed about the tournamentâ”

“It doesn't matter,” I say, although, of course, it does. It matters so much that, now, without hope of knighthood, I feel like a hole has opened up under me and I am falling through it.

“Madoc might change his mind.” She follows me down the stairs, grabbing up our baskets before I can. “And at least now you won't have to defy Cardan.”

I turn on her, even though none of this is her fault. “Do you know why Madoc won't let me try for knighthood? Because he thinks I'm weak.”

“Only idiots aren't scared of things that are scary,” Taryn says, which is undoubtedly true, but still fails to dissuade me.

“Skip lessons today,” I tell her again, but she won't, so we go to school together.

Taryn watches me warily as I talk with the leader of the mock war, Fand, a pixie girl with skin the blue of flower petals. She reminds me that there's a run-through tomorrow in preparation for the tournament.

Later, when Cardan, Locke, Nicasia, and Valerian sit down to their lunch, they have to spit out their food in choking horror. All around them are the less awful children of faerie nobles, eating their bread and honey, their cakes and roasted pigeons, their elderflower jam with biscuits and cheese and the fat globes of grapes. But every single morsel in each of my enemies' baskets has been well and thoroughly salted.

Cardan's gaze catches mine, and I can't help the evil smile that pulls up the corners of my mouth. His eyes are bright as coals, his hatred a living thing, shimmering in the air between us like the air above black rocks on a blazing summer day.

“Have you lost your wits?” Taryn demands, shaking my shoulder so that I have to turn to her. “You're making everything worse. There's a reason no one stands up to them.”

“I know,” I say softly, unable to keep the smile off my lips. “A lot of reasons.”

She's right to be worried. I just declared war. 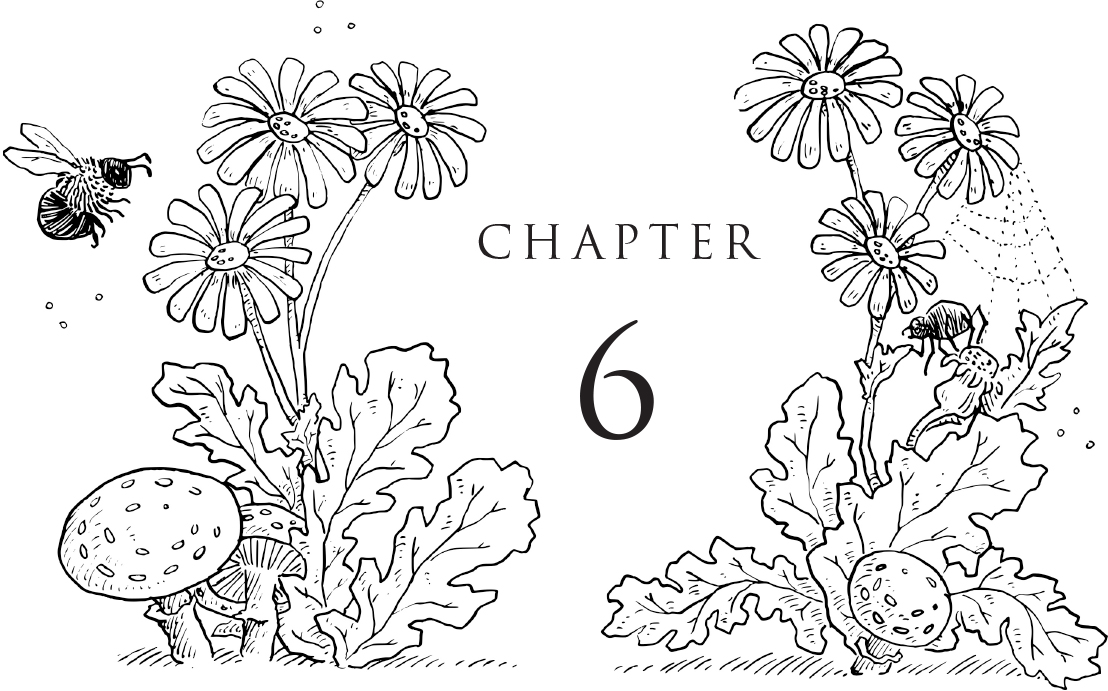 I
've told this story all wrong. There are things I really ought to have said about growing up in Faerie. I left them out of the story, mostly because I am a coward. I don't even like to let myself think about them. But maybe knowing a few relevant details about my past will make more sense of why I'm the way I am. How fear seeped into my marrow. How I learned to pretend it away.

So here are three things I should have told you about myself before, but didn't:

1.
When I was nine, one of Madoc's guards bit off the very top of the ring finger on my left hand. We were outside, and when I screamed, he pushed me hard enough that my head smacked into a wooden post in the stables. Then he made me stand there while he chewed the piece he'd bitten off. He told me exactly how much he hated mortals. I bled so muchâyou wouldn't think that much blood could come out of a finger. When it was over, he explained that I better keep what happened secret, because if I didn't, he'd eat the rest of me. So, obviously, I didn't tell anyone. Until now, when I am telling you.

2.
When I was eleven, I was spotted hiding under the banquet table at one of the revels by a particularly bored member of the Gentry. He dragged me out by one foot, kicking and squirming. I don't think he knew who I wasâat least, I tell myself he didn't. But he compelled me to drink, and so I drank; the grass-green faerie wine slipping down my throat like nectar. He danced me around the hill. It was fun at first, the kind of terrifying fun that makes you screech to be put down half the time and feel dizzy and sick the rest. But when the fun wore off and I still couldn't stop, it was just terrifying. It turned out that my fear was equally amusing to him, though. Princess Elowyn found me at the end of the revel, puking and crying. She didn't ask me a single thing about how I got that way, she just handed me over to Oriana like I was a misplaced jacket. We never told Madoc about it. What would have been the point? Everyone who saw me probably thought I was having a grand old time.

3.
When I was fourteen and Oak was four, he glamoured me. He didn't mean toâwell, at least he didn't really understand why he shouldn't. I wasn't wearing any protective charms because I'd just come out of a bath. Oak didn't want to go to bed. He told me to play dolls with him, so we played. He commanded me to chase him, so we played chase through the halls. Then he figured out he could make me slap myself, which was very funny. Tatterfell came upon us hours later, took a good look at my reddened cheeks and the tears in my eyes, and then ran for Oriana. For weeks, a giggling Oak tried to glamour me into getting him sweets or lifting him above my head or spitting at the dinner table. Even though it never worked, even though I wore a strand of rowan berries everywhere after that, it was all I could do for months not to strike him to the floor. Oriana has never forgiven me for that restraintâshe believes my not revenging myself on him then means I plan to revenge myself in the future.

Here's why I don't like these stories: They highlight that I am vulnerable. No matter how careful I am, eventually I'll make another misstep. I am weak. I am fragile. I am mortal.

I hate that most of all.

Even if, by some miracle, I could be better than them, I will never be one of them.