The Dark One: Dark Knight 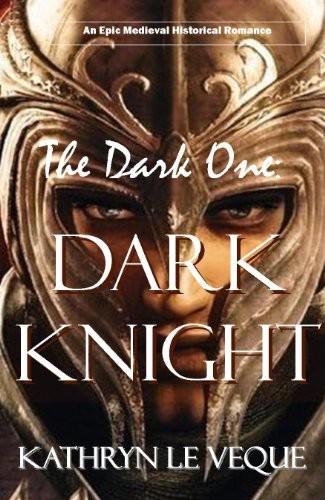 THE DARK ONE: DARK KNIGHT

An Epic Medieval Tale of Adventure and Romance

I
never thought this book would actually make publication, but here it is!

The
Dark One: Dark Knight was written twenty years ago, back when the author was
still learning her craft and trying to find a writing style that best suited
her.  The novel is ‘epic’, meaning it is very long, very detailed, and it is
truly an adventure from beginning to end.

It
is also only the third novel the author ever wrote after “The Wolfe” and “The
Defender”.

Although
the book has been edited for content, the author refrained from any intense
re-writes or heavy editing, instead, choosing to present it to readers in its
original form to preserve the integrity of Gaston’s tale as it was meant to be
told.  Had she written it today, it would more than likely have been written in
a much different style.

The
original dedication to this novel was lost years ago, so suffice it to say that
the author dedicates this work to her parents, Bill and Sylvia Bouse, who read
this story twenty years ago and were perhaps a bit surprised that their
daughter had written such an epic.

Also
much thanks to Kris for painstakingly re-typing the novel from its original
degraded hard copy, and finally to Linda, Steve, & Jennifer for their
assistance in fleshing out amateur writing to help create finished product. I
owe you such a great deal.  You have my undying gratitude.

Enjoy
The Dark One: Dark Knight.

The mid-summer sun
beat down on the earth with unmerciful force. Indeed, summers in the north
central of England could be hot, but this heat was unseemly. If it was human or
animal, it was sweating and complaining, and if it were anything else, it was
wilting and dying.

But the heat of the summer was the last
thing on Remington’s mind.  Crystal sea-colored eyes, so pale and clear they
were nearly unnatural, gazed from the window of her second story bower, fixed
on the road that led from the keep and disappeared on the horizon.  Oleg had
said a rider was approaching, and she waited with more patience than she felt
for the rider to show himself.  She prayed with a desperate fervor that it
wasn’t her husband.

Sir Guy Stoneley was captured at the
conclusion of the battle of Stoke by none other than Henry Tudor himself.
Loyalists to Richard III had made a valiant attempt to gain sway the country
back into control of Yorkists, planning to set the Earl of Warwick upon the
throne, but Henry and his army proved too powerful.  The defeat had been
overwhelming.

Her husband and other rebels were
commandeered by the Tudor and hauled away to London. Last she heard, her
husband was locked up in the White Tower. Remington prayed that he would never
again see the light of day.

“They would not release him, would they?”
Came a faint feminine voice.  “He is an enemy of the crown.”

Remington tore her eyes away from the
window long enough to glance at her sixteen-year-old sister.  “Nay, Rory.  He’s
not been released.  The rider is someone else.”

“But who, then?” Rory demanded, her wildly
curly red hair shaking.

Remington shook her head, her eyes once again
trailing to the window. “I do not know, sweetheart.  We shall have to wait and
see.”

Rory let out an impatient sigh and stomped
about the room nervously.  When Sir Guy had left to fight, he had taken the
majority of his men with him. The only men remaining behind at Mt. Holyoak were
the old and the very young, and a skeleton troop of 20 men.  Hardly enough
against Henry and his army, but Sir Guy had been confident that the Yorkists
would defeat the usurper Welsh bastard within weeks, months at most.  He
furthermore believed there was no possible way Henry would progress to the
heart of Yorkshire, where his fortress was nestled in the Vale of York.
Therefore, he took his entire complement of men and left Mt. Holyoak to the
mercy of God.

The result was a massive fortress left
virtually unable to defend itself, especially now that it was considered an
enemy’s holding.

Remington shook her head sadly; never in
her life did she imagine that she would actually be considered an enemy of the
crown, a traitor in her own country, and she had her bastard husband to thank
for it.

A slight blond figure breezed into the
bower, tiny and feminine.  Remington’s youngest sister, Skye, stood next to her
oldest sister and gazed out of the window alongside.

“It’s not him, is it?” she asked with as
much courage as a thirteen-year-old girl could muster.

Remington’s eyes blazed as she turned to
her baby sister.  “No Skye, it is not,” she glanced at Rory, pacing the floor.
“And even if it is, I swear to you that he will not touch you.  I swear with
God as my witness.”

Rory stopped pacing. “You cannot stop him, Remi,” she
said.  Rory had tried, God only knew she had.  She was tough and strong for a
girl, and could fight as well as some men.  But when Sir Guy had forced himself
upon her, again and again, she fought him every time but had ended up knocked
silly while he assaulted her.  And Remington…her sister, her attacker’s wife,
had borne worse treatment and wounds than Rory cared to think of.  Every time
she thought of her sweet sister at the hands of her fiendish husband, it made
her blood boil.

Remington swallowed hard, knowing that Rory
had not said the words to seem cruel. It was simply a fact.  Sir Guy did as he
wished with his wife and her three younger sisters and there was naught anyone
could do to do to stop him. Even his men had looked the other way when he raped
eleven-year-old Skye.

“I…. I would wager to say that the rider
could be Charles,” Remington said hopefully after a moment.   “He rode to
gather news only a few days ago.  Mayhap it is him.”

“If it is, then he has returned quickly,”
Rory commented.

Remington silently agreed with her sister, bringing
about the original question of the rider’s identity. With a worried hand, she
stroked Skye’s silky blond hair and moved away from the window.

With everything her husband had done to her sisters,
the younger girls had not lost their fighting spirit.  They were a handful, the
two of them, too much for their aged father.  The man had died three years ago
of an ailing heart and never once had the strength to deal with his
high-spirited daughters.  The destitute baron had married off his eldest to his
neighbor in exchange for the man’s protection, knowing the man was of
questionable character but delivering him Remington, anyway.  He knew his
daughter suffered with the disgusting man, but he chose to ignore the fact.  He
had done what he had had to do, and moreover, there was naught he could do
about the situation as it was. Remington was Sir Guy’s wife, and no longer his
daughter. Remington had always hated him for overlooking her plight.

When Jasmine, Rory and Skye had come to
live with her after her father’s death, Sir Guy had taken fiendish delight in
raping the girls and treating them like chattel.  Rory and Skye were tough and
survived with their minds intact, as youngsters often do; yet Jasmine, now at
the threshold age of twenty years, considered her life ruined.  The younger two
spent their days doing normal things young adults do, and playing evil tricks on
Sir Guy’s young cousin, Charles, whereas Jasmine was a generally sullen girl
and spent a good deal of her time alone, terrified of the moments when the
baron would come to call on her.

Charles Stoneley was Skye’s age, a sweet
and quiet boy.  How on earth he was related to the deviant knight was a
question for the gods, because he was nothing like Sir Guy.  Too young to fight
in the War of the Roses, he stayed behind, as laird of the keep and Remington
loved the lad with all her heart.

Remington’s heart softened at the sight of
her seven-year-old son.  His beautiful sandy-blond hair was tousled, as usual,
and his eyes were alive with apprehension.  Eyes the color of his mother’s.  “I
do not know, Dane.  But I intend to find out.”

Jasmine did not say a word, looking at her
eldest sister for decisions and comfort.  At twenty-six years, Remington had
seen more of life’s heartaches than most women twice her age and was inordinately
wise.  But there was far more to Remington than her wisdom and intelligence;
surely a lovelier woman had never existed, as her late husband had sworn just
before he beat her within an inch of her life.  Her hair was a chestnut-auburn
color, but not just any plain shade; it was a miraculous myriad of golds and
reds, intertwining and dancing in the light, playing off of her natural curls
and falling to her buttocks.  It could be an unruly mass but she never bothered
to tie it back; she loved the feel of it on her neck.  Her skin was as white as
pure cream and her eyes, with her thick, dark lashes and peachy-colored lips,
made her beauty truly striking.

As beautiful as Remington was, she was terribly
vulnerable when it came to men.  The only men she had ever been close to had
ignored and abused her, and she was absolutely terrified of the opposite sex.
All except for her beloved son, Dane.  The lad was her assurance that there
truly was a God.

They all made their way down to the massive
double bailey of Mt. Holyoak.  The fortress was intricately constructed thanks
to her husband, for the man was a military fanatic and demanded the most secure
and fortified fortress in all of England.  Only a mile from the Irish Sea, he
was paranoid as well, and was sure the Celts were planning on an eventual
invasion and he was determined not to be caught off guard.  The fortress was so
fortified it could have held off Hadrian himself, even with a skeleton guard.

Mt. Holyoak sat on a natural hill, a hill
whose sides had been planed down to create a fifty-foot drop all the way around
the fortress that plunged into a man made moat below.  The only way in, and
out, of the fortress was a narrow road that led from the village up to the
massive drawbridge.

Charles made his way up the road,
thundering across the drawbridge and into the outer bailey, drawing his steed
to a ragged halt.  Old men and aged soldiers were there to greet him, taking
hold of his horse and helping him dismount. Remington, clutching Dane’s hand,
was at his side.

“Charles!” she gasped.  “What’s wrong? Why
have you returned so soon?”

Charles was exhausted; his young face was
creased with dirt and fatigue as he met Remington’s inquisitive gaze.  “I bear
news, Remi.  Catastrophic news.”

Remington felt bile rise in her throat and
her palms began to sweat.  She hoped she could open her mouth to speak without
vomiting. “What news, Charles?  I would hear it .”

Charles was distraught.  “Oh, Remi, ‘tis
terrible.  I met up with several of Henry’s men at an inn, not far from here,
and they told me the news.  I had to return,” he put his hand on Remington’s
arm, his gaze painful.  “He’s coming, Remi.  He’s coming to Mt. Holyoak.”

Remington was not only terrified, she was
puzzled.  “Who is coming?”

Charles swallowed hard, “The Dark one.  The
Dark Knight.”