The Dead Series (Book 1): Tell Me When I'm Dead 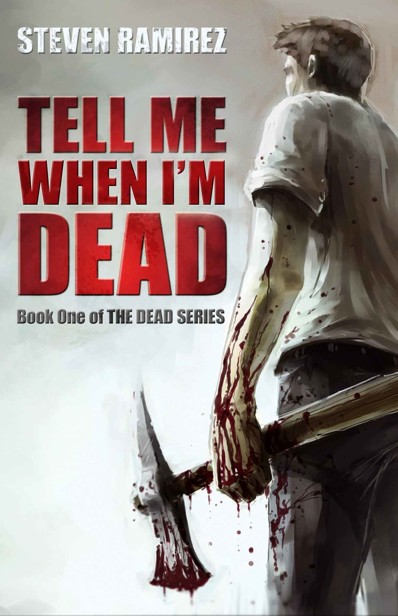 Tell Me When I'm Dead

For George and John.
You guys were right.
They’re all messed up.

The world’s gone mad, he thought. The dead walk about and I think nothing of it. The return of corpses has become trivial in import. How quickly one accepts the incredible if only one sees it enough!

“Oh, Robert,” she said then, “it’s so unfair. So
unfair.
Why are we still alive? Why aren’t we all dead? It would be better if we were all dead.”

— Richard Matheson,
I Am Legend

Not all draggers
want to eat your flesh. Some want revenge.

This was what went through my head as I lay frozen in the corner of a cold storage area, my body halfway to dead and my breath like a broken concertina. The pounding on the metal door was deafening. The wailing of the undead tore at my brain like a glass dagger. It was a matter of time before they got in. I might be able to take out one or two—even without a weapon—but in the end they’d finish me.

I couldn’t get my mind clear. I thought I heard automatic gunfire and the sound of people screaming. How had the draggers broken in? Wasn’t anyone defending the doors? Maybe my captors were passed-out drunk.

It would’ve been so much better for me had I done the same. I wouldn’t feel anything as I was ripped to pieces by animal-like claws and razor-sharp teeth that reeked of carrion, the filmy grey eyes unseeing and unfeeling.

In my delirium I prayed Holly and Griffin made it to the Arkon building and under the protection of Warnick and his men. There was no way for me to check. My cell phone was busted. I hadn’t slept for days. I was hurt. Bad. Surrounded by huge aluminum tanks of ice-cold beer waiting to be tapped. Nice touch, Lord. Back atcha.

Through the pounding and the screaming I wondered if my friend Jim was outside with the others, trying to claw his way in and shred me up out of hate for what happened to him. It wasn’t my fault he turned. It wasn’t anyone’s fault.

In the days preceding this—I don’t remember when—I saw a horde tear a guy apart. Big as he was, he was no match for them. In a matter of seconds they had him on the ground as they ripped his belly open, exposing the soft, pulsating organs. They cored him like an apple, from bottom to top. His head was the last to die, I remember, his eyes frozen in the terror of seeing his own hollowed-out body shudder into stillness. I wished I had a gun.

But it was the screaming. I’d never heard a man scream like that before. Was I capable of making that sound?

I stared at the door, wondering if it would hold. There was no way to lock it from the inside. Besides, I was too weak. The nailheads had left me in here and were planning to kill me according to the one they called Ulie. It didn’t matter that I’d agreed to join their insane movement. Or the draggers would find me instead.
You ’member that guy Dave Pulaski? Whatever happened to him? Oh yeah, he’s dead. Just like all the others.

So far the horde was unable to pull the door open. I needed a beer bad.

I thought of Black Dragon and the Red Militia. Both proved to be false remedies in these delirious times. The soldiers—private military contractors really—were overwhelmed. And the militia, which started out as a movement to “save” people, turned into ravening chaos and violence. They fought Black Dragon, they fought civilians and they fought themselves, all at the behest of their insane leader, Ormand Ferry, with his dream of a new order, which was disintegrating into a long, debauched night of madness here in this out-of-the-way brewery.

I didn’t know which was worse—the draggers or Ormand Ferry. Either way you were dead.

It was so cold in here as I sat there thinking about these last weeks—about Holly, Jim and Missy. Everything went wrong after that night—that lost night. And what about me? I was a good person—I
am
. Used to be … I don’t know. But it was after that monstrous night when everything went sideways and Hell came looking for the good people of Tres Marias.

I remember. It was
July 5—the night when Jim got shitfaced and found his way to my house in the dark. He must’ve fallen, because when I answered the door well past ten, his upper lip was bleeding and one of his teeth was chipped.

“Got any beer?” he said through blood and saliva.

Tres Marias was one of those towns in Northern California you passed through on your way to something better. There was nothing to do here except get drunk. Since high school that’s pretty much what Jim and I did. Before that I used to play hockey, and when I wasn’t on the ice I devoured books like a glutton. My favorites were by Faulkner, Steinbeck, Vonnegut and Dick. Somewhere along the line I decided beer was better. There was no reason for it other than it tasted good and got me high. What followed were no college and no high-paying job far away from the stink hole I called home. Instead of promise, every day I looked forward to low wages and getting lit.

Then I met Holly. I don’t know why she spent two minutes on me. As we lay in bed the first time she said, “I can’t wait for you to become the man I will make you.” Any other guy would’ve walked. I stayed.

I attended AA meetings and took community-college classes. Poor Jim kept on going the way he was going. Though he was still my friend, it got harder to see him. Because when I was with him, I saw myself—my old self. And I didn’t like it.

Holly padded down the stairs and stood behind me, her arms folded. I knew she was mad. She told me she disapproved of Jim, fearing he’d get me drinking again. But I knew better. I’d changed my ways for good.

“What do you want, Jim?” she said in that short tone of hers—the same tone she used when I forgot to take out the trash.

Holly was a knockout of a girl with a high-school education. Smarter than most people I knew. Her all-time favorite movie was
The Notebook
. Though she was a head shorter than me, when she got into her power stance, her fine blonde hair hanging over her shoulders and those huge green eyes boring into you like some kind of industrial laser, she was scary.

Jim opened his mouth to say something and threw up on the star jasmine.

“I’ll drive him home,” I said, getting my wallet and keys.

Jim lived way out up the 5 at the edge of town near the national forest, in the house his father built. Both his parents were dead—like mine. He used to have a dog named Perro, but he went missing a few weeks back. He’d been following Jim on one of his drunken nighttime hikes along the 299 when an eighteen-wheeler almost ran them over. I always thought the tractor-trailer was meant for Jim and the dog sacrificed himself. But the dog had disappeared. Once I read a story about a dog that saved his owner’s life in a house fire and later died from smoke inhalation. It was the romantic in me, I guess.

“So what happened?” I said as we glided along the dark highway, not a car in sight.

“Why did you go on another bender?”

“Thinking about the old days, I guess.”

Jim Stanley and I used to be best friends, as close as any two brothers. We went to high school together. Got summer jobs together. Celebrated twenty-one together by driving up to the Point and drinking enough beer and vodka to bring down a moose. We passed out up there too. It was December and we almost died of the cold. When we woke, it was in the twenties and we both had hypothermia. Ended up in the hospital. Still, it was the best birthday ever.

We liked pretending we were badasses, but we never did any real harm. My mom—sick as she was—kept me in line, and whenever Jim came over to hang out and eat, which was much of the time, she went to work on him too. When it came to advice, Jim always did have a tin ear though.

“Jim, I keep telling you. Those days are gone.” I smelled the beer and puke on his breath, and I was glad we were no longer hanging out. I don’t know how I made it to twenty-four. Holly had everything to do with it, I guess.

I met her working at Staples, where I managed the copy center. Two years younger than me, she was the new cashier and seemed to have her eye on me from Day One. I don’t think a week had gone by when she invited me to dinner at her mom’s up in Mt. Shasta. Then we went back to her little apartment. She was all over me in bed, but right before anything happened she laid it on the line. I’d have to stop drinking—that was the deal. No sobriety, no Holly. I saw the determination in her eyes—it was like she was on a mission from God. And it made me even hotter for her. So I signed on.

After Holly and I married, Jim came around less and less. I’d see him downtown sometimes on my lunch break, but mostly he was out of my life. Things changed forever the night he showed up again.

“Why don’t we hang out anymore?” Jim said. He sounded like a hurt child.

Loving a Lawman by Amy Lillard
Under the Lights by Rebecca Royce
Enchanted Glass by Diana Wynne Jones
The Cupel Recruits by Willshire, Susan
The Stranger by Anna del Mar
Tritium Gambit (Max and Miranda Book 1) by Hyrkas, Erik
Wind Warrior by Jon Messenger
Mr. Rockstar by Leaf, Erin M.
Even Silence Has an End by Ingrid Betancourt
Down With the Royals by Joan Smith