Read The Duke of Christmas Past Online

The Duke of Christmas Past 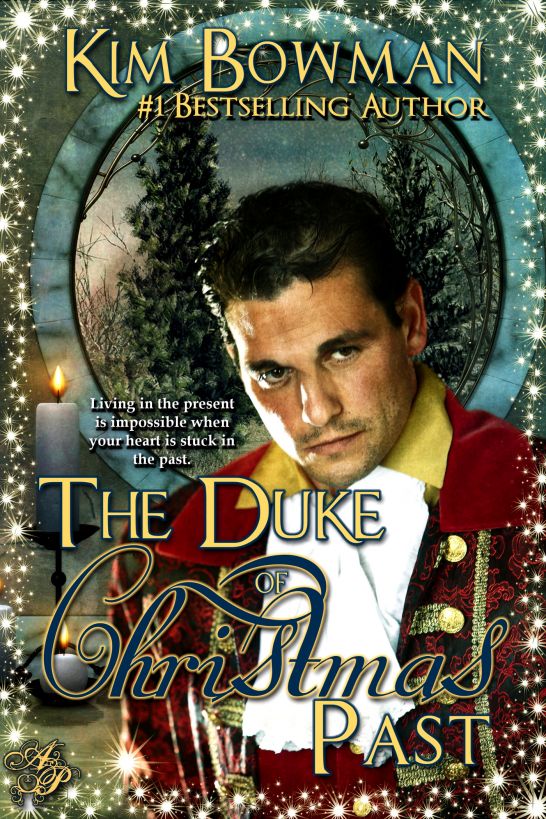 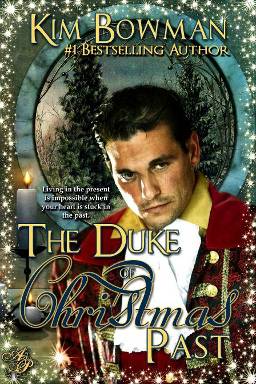 The Duke of Christmas Past

This is a work of fiction. Names, places, characters,
and events are fictitious in every regard. Any similarities to
actual events and persons, living or dead, are purely coincidental.
Any trademarks, service marks, product names, or named features are
assumed to be the property of their respective owners, and are used
only for reference. There is no implied endorsement if any of these
terms are used. Except for review purposes, the reproduction of
this book in whole or part, electronically or mechanically,
constitutes a copyright violation.

THE DUKE OF CHRISTMAS PAST

Cover Art Designed by For the Muse
Designs

To my beautiful sister and biggest supporter,
Michele. May Christmas magic bring you your prince charming and
that he be as amazing as you. I love you.

Chairs weren't the only things flying at this year's
annual Kringle Ball. Throw in a duke, two appallingly outspoken
ladies, an earl, a young naval officer, and enough fists to make
Gentleman Jackson proud, and you have successfully recounted every
delicious detail of this past season's unmatchable scandal.

One has to wonder how it all started. Some say
Gatewood was merely defending his sister's honor. Others say
Norcross seduced the wits out of not one but two women in the very
same night! And the worst of the gossip, though it pains me to
admit to it as such, comes to us in the form of a first-hand
account. Miss Tess Warren was seen smiling, yes smiling (such a
vulgar act to begin with) at the Duke of Gatewood not minutes
before he was beaten with a chair. Now, what the devil (and please
pardon my language, it really is inexcusable, but given the
circumstances it must be said) does Miss Tess Warren have to smile
about? And what, dear readers, has caused the good duke to lose his
impeccable manners, not to mention his mind?

It had come to this. Confining himself behind the
walls of his study to avoid the festivities of the Christmas
holiday.

Donovan Ellis, Seventh Duke of Gatewood, wanted
nothing more than to forget this season and all the foolery that
went along with it. There would be no wreaths hung on the doors and
no candles adorned with greenery would line the mantel. He'd
threatened to dismiss Cook if she served him syllabub or Christmas
pudding.
Even so, I wager one of the servants will at least put
a Yule log on one of the fires.

Donovan lounged in his high-back
chair, sipping brandy and watching the fire.
The snapping
and crackling of the logs soothed him, broke the eerie silence of
the townhouse.

He glanced sideways at the polished walnut table on
his left, and his gaze settled on the silver tray bearing the
decanter of brandy. Firelight flickered off the cut crystal and
splintered, sending amber glints dancing across the floor. When
Lawrence, the butler, had brought the spirits, Donovan had told him
not to bother lighting the oil lamps, just one of
the candles on the mantel and another on the small table by his
chair. The dull glow did no more than place the study in shadow.
That was fine with Donovan; the dark ambiance fit his grim
mood.

A draft swept through the study, dimming the fire.
The flames on the candles swayed, and the darkness swooped closer.
Shadows climbed from the corners and loomed over him. He glanced
toward the bay window, checking that it was securely latched. But
the reflection of the fire in the panes was all he could see.

As he started to turn back toward the fire, a circle
of bright light, high up near the top of the glass and just beyond
the window, caught his attention and he squinted, trying to make
out what the object was. Perhaps starlight? Even as he tried to
convince himself of that, the orb grew bigger, floated closer and
lower to the ground.

Donovan sat transfixed, unable to
look away as an
illuminated figure approached the window,
passed through without pause as if the glass and wall weren't
there, and glided across the room, stopping close enough to the
fire to be cast in its light.

Donovan blinked several times, his mind warring with
what he saw. He glanced down at the glass in his hand. "I could
have sworn this was my first brandy." Lifting his head, his gaze
again met the vision. "But I must be foxed and seeing things. Or my
eyes fool me."

Dark brown eyes —
his
dark brown eyes — stared
back at him. Had it not been for the fact that he was sitting and
the phantom was standing, he could have been looking in a mirror.
The vision before him had the same dark wavy hair, broad shoulders
that seemed to fill the room, and chiseled jaw.

The apparition crossed his arms. "Could there not be
another explanation?"

Hearing the phantom speak with his voice unnerved
Donovan, gave him pause. It took a moment for understanding to sink
in.

"Ah. Dreaming, then. And not a very good dream, since
I'd never wear such an outrageous burgundy tailcoat." Donovan
gestured in the specter's direction with his glass. "Then again, I
suppose I'm not actually wearing such foppish attire but having a
nightmare."

A smile tugged at the corners of the ghost's mouth.
"So you'd prefer to reason that you're dreaming—"

"Having a nightmare… and a bad one at that."

"Very well, having a nightmare, rather than actually
believe I'm real?"

Donovan drained his glass then reached for the
decanter, desperately in need of another. "On the contrary, I'm a
logical man. And as such, I know it's impossible for me to be
lounging in my chair and standing in the middle of the room at the
same time. Not to mention that you cannot be me if I'm me, unless
this is a bad dream."

"Yet you see me… you're speaking with me."

Donovan waved his hand. "That proves nothing." He
brought the refilled glass to his lips and drained the
contents.

"Well then, you won't object if I pour myself a glass
of brandy."

"Not at all. Happy to share," he said. The initial
shock of seeing a ghost glide through the wall had scared him, had
been frightening indeed. But having a drink with himself as if they
were old chums from University? Donovan smiled at the situation's
inherent humor.

The apparition walked over to the ornate walnut
cabinet and retrieved a wineglass. He strode back, hefted the
decanter, and poured a generous amount into his glass. Then the
specter sat in the black leather high-back chair opposite
Donovan's.

"Forgive me, where are my manners. Please, have a
seat."

The phantom met Donovan's stare over the rim of the
glass. He lowered the drink and smiled. "Think nothing of it. I
hardly need an invitation to sit in my own home."

What an arrogant, obnoxious —
His
home?
Donovan opened his mouth to give the ghostly figure the set-down he
deserved then shut it almost as fast.
I think I need another as
well.

He filled his own glass again then watched, a bit
surprised, as the spirit swallowed down the liquor.
But then
again, if this is a dream, he didn't really pour the drink, did
he?

"A very nice brandy, your grace."

"I was just wondering what I should call you."

"You may call me your grace."

"I see your point. Very well, you may call me Past
Duke," the specter said.

"Why should I call you Past Duke?"

"I'm the past you, or rather the you you should have
been," he explained.

Donovan furrowed his brow. "I beg your pardon?"

"Isn't the past the reason you're sitting alone in
this dungeon of a study on Christmas Eve? Aren't the events that
took place, what happened between you and Delia, what didn't happen
between you and Tess, the reason—"

Rage coursed through Donovan's veins, the memories
once again clawing at his heart. He slammed his fist down on the
arm of the chair. "Silence! Don't speak of them." With a trembling
hand, he set the glass on the tray and stood. "I believe my
imagination has been entertained enough for one evening. It's long
past time for me to retire."

Donovan sighed and pinched the bridge of his nose.
His anger drained away, leaving him with a heavy heart. He had
enough demons to fight without adding arguing with himself to
it.

Past Duke drew his foot back and planted a hard kick
to Donovan's shin, making him curse.

"Whyever did you do that?" he demanded, rubbing his
throbbing leg.

"This isn't a dream. Although I'd be more than happy
to punch you in the nose if you need more convincing."

Donovan glared at him. "I don't advise that."

"Avoiding me won't make me disappear. I'm here to
grant you one wish."

The room fell silent; the other him seemed to blur,
become faint. The embers in the fire dimmed to no more than tiny
sparks. Both candles went out. A draft swept through the fireplace,
sending a chill through Donovan's body. He shivered.

The room fell black and the air stopped moving,
forcing Donovan to draw in deeply to fill his lungs, making him
dizzy. He tried to move but was frozen in place. Almost as if he'd
been glued to the spot, as if the darkness was a prison.

Panic spiked through him. His sanity had clearly
deserted him, leaving him trapped in this nightmare.
Wake up.
Wake up now.

Donovan seemed to be spinning, then suddenly the fire
crackled to life and the candles again illuminated the study. He
whirled around, searching the shadowy corners. Relieved no demons
were lurking about, he let out the breath he'd been holding.
Just as I suspected. A dream. A drunken hallucination, had to
be. One that sobered me quite fast.

Conversing with myself. What a ridiculous
notion.
He retrieved the candle from the table. When he turned
toward the door, Past Duke was there. Donovan's body trembled and
his heart thumped erratically, seeming to skip more than beat. The
lightheaded sensation from a few moments earlier returned with a
vengeance, and he dropped to his knees. The monster blocking his
exit was Death, come to collect him. He had to get out of there,
get away before the demon took his life.

But isn't that what you want? To leave this world?
Leave the loneliness of having lost all those you love?

The fear coursing through his body seemed to answer
back,
No! I want to live! Get up!

Past Duke tilted his face toward the ceiling. "Why
did I think this would be easy?"

Donovan lurched to his feet and backed away. The
vision of himself filled the doorway, the room, demanding his full
attention. "W-what do y-you want from me?"

The ghost stalked him. "I want the same thing you
want. The life I should have had — could have had, if you hadn't
been such a fool."

"I-I-I don't understand." Donovan collided with the
wall. His body shook so violently that his teeth banged against
each other.

Past Duke stopped in front of him. "You will soon
enough. You, my dear fellow, are going to go back to the past and
fix it."

"You're going to set right what you did wrong."

"Your heart cries with the regret and sorrow from the
past. I'm the person you should have been, still can be. But only
if you can set the future on the right course," Past Duke said.