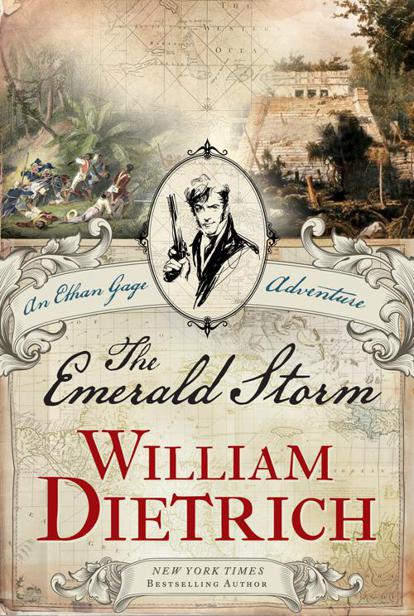 For Noah, a budding adventurer

I was born a slave, but nature gave me the soul of a free man. 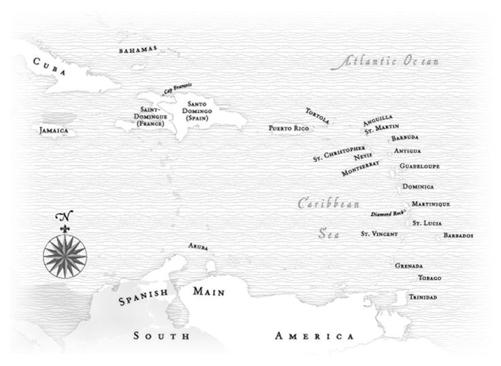 M
y intention was to retire.

After learning in 1802 that I had fathered a family, then rescuing mother and son from a tyrant in Tripoli, and finally escaping in a submarine invented by crackpot American inventor Robert Fulton, I was more than ready to trade heroism for domesticity. My preference is lover, not fighter. No one tries harder to escape adventure than me, Ethan Gage.

So why, in April of 1803, was I clinging to the side of a frozen fortress in France’s Jura Mountains, sleet in my eyes, a bomb on my back, and hemp rope heavy as a hangman’s noose slung round my neck?

Despite my best efforts to settle down, my new family was in peril again, and scaling Napoleon Bonaparte’s impregnable prison had become a necessary step toward domestic bliss.

I was grumpy at this predicament. As one matures (a slow process in my case) the unpredictability of life becomes less exciting and more annoying. French police and British spies claimed the fault was mine, for trying to pawn a stolen emerald, but I felt the jewel was small compensation for my battles with the Barbary pirates. Now there was a far bigger treasure at stake, strange aerial conspiracies, brewing war between France and England, and the need to retrieve my own nearly three-year-old son, whom I kept losing like a button. So here I was on the French frontier, boots scrabbling on an icy wall.

The promise that motivated me: If I could break a Negro hero to freedom, I, my bride Astiza, and little Horus, or Harry, might finally be able to live somewhere in peace.

“And you’ll further the cause of liberty and equality as well, Ethan Gage!” my old compatriot Sir Sidney Smith had written me.

I’m skeptical of such causes. The idealists who dream them up send employees to carry them out, and said employees have the habit of dying early. If everything in this latest mission went well, the best I could hope for was flinging myself into space aboard the untested flying contraption of an eccentric Englishman, of which that nation has a surfeit. And that experiment was
after
my new bride pretended to be the Creole mistress of the world’s most notorious Negro, locked in Napoleon’s gloomiest prison.

In short, my quest for retirement had gotten me in a mess of political causes well above my station, and once more I was supposed to straighten the world’s difficulties out. I seem forever a pawn of both British and French, and both countries wanted my expertise applied to flying machines and lost Aztec treasure in hopes it could decide the war between them. Damnation! Slave revolts, naval mastery of the Caribbean, and staving off invasion of England were exactly the kind of weighty issues I’d pledged to get away from.

It’s even more exhausting to be necessary, given my flaws. My human habits of greed, lust, impatience, vanity, sloth, and foolishness tend to hobble my idealism.

To explain my fate as reluctant hero: While my mentor Benjamin Franklin did his best to instill character in me before he died, my instinctive aversion to honest work, thrift, and loyalty had provided a pleasant if aimless life in Paris as the eighteenth century drew to a close. Then circumstances threw me in with a young rascal named Napoleon and no end of adventures involving books of ancient wisdom, Norse gods, Greek superweapons, and a tormenting seductress or two. I’ve found that heroism doesn’t pay very well, and is frequently a cold, filthy, and painful occupation as well.

I originally went adventuring because I was poor and a fugitive from an unjust murder charge. Now, if I could profit from the emerald I stole from the Barbary pirates, I would emulate the rich and never do anything interesting again. The entire point of being wealthy, as I understand it, is to escape life in all its miseries, and to avoid work, discomfort, unfamiliarity, and challenge of any kind. The rich I’ve met don’t have to live but merely exist, like pampered plants, and after battles, tortures, broken hearts, and nightmare terrors, it had become my goal to become as dull and self-satisfied as the highborn. I would think about horse breeds and ledger books, offer predictable opinions to acceptable acquaintances, and spend four hours eating dinner.

It would be a pleasant change.

Accordingly, Astiza, Harry, and I had traveled from Tripoli to France to sell the gem I’d snatched. The very best jewelers, paying the very best prices, are in Paris. My plan was to make myself wealthy, cross the Atlantic, buy a quiet home in America, pass my wisdom to young Harry, and sire more little Ethans in the off-hours with my voluptuous temptation of a bride. Perhaps I’d toy with something mildly ambitious like taking up astronomy and looking for new planets like Herschel, the telescope builder who’d first spied Uranus. His sister Caroline was good at finding comets, so maybe Astiza would take peeks at the sky as well, and we’d reinforce our renown as a couple of clever savants.

But things had gone awry. First I had to scale Fort de Joux and break free from prison one Toussaint L’Ouverture, liberator of Saint-Domingue, the tormented western half of the island of Hispaniola that the natives call Haiti.

The black general L’Ouverture, an adopted name meaning “the opening,” had reconquered his country for France, been tricked into arrest because he succeeded, and been rewarded for loyalty by imprisonment. The slaves in the Caribbean had risen against their French overseers, you see, and the Spaniards and the British had seen an opportunity to invade a French possession. The French had rather cleverly recruited rebel armies back to their side by promising freedom, and then arrested Toussaint just when he was on the brink of achieving it. Now Napoleon was trying to reverse time by reinstating slavery, and Saint-Domingue was a hellhole of fire, massacre, torture, and oppression.

The question I was blackmailed into seeking an answer for was: Did L’Ouverture, locked in icy Fort de Joux, know a fantastic secret of an ancient treasure that held the secret of flight, and thus mastery of the world?

The French border fortress of the medieval Joux family had started as a wooden stockade on a rocky outcrop in 1034, my British advisers had informed me. Over the nearly eight centuries since (I was climbing in the predawn hours of April 7, 1803), it had become a barnacle-like accretion of tower, wall, parapet, and gate. By now it had three moats, five concentric walls, and a view of La Cluse Pass that was literally breathtaking, given that the altitude and climate of the place were enough to bring on apoplexy. Even in April the sheer wall I was ascending was coated with a particularly nasty veneer of frost. What a ruthless place to imprison a Black Spartacus from the tropics, leader of the first successful Negro slave revolt in history! There’s dampness to Fortress de Joux more penetrating than the actual temperature, and the mountains around are brown, bleak, and spotted with snow. Napoleon hoped the cold would squeeze out the black general’s revelations, and the British wanted him before it did.

The English-paid, French-born agent who recruited me for this insanity, Charles Frotté, tried to make my assignment sound reasonable.

“The fortress is quite picturesque, and delightfully quiet when armies aren’t marching its way,” said Frotté, a spy with more allegiances than a courtesan in the Kingdom of Naples. He was a Vatican hireling who’d tried unsuccessfully to rescue poor King Louis before the guillotine dropped, and was still a royalist who’d been signed up by Sidney Smith (my old ally, now appointed to Parliament) with English gold. There were rumors the Austrians, Dutch, and Spanish were paying Frotté as well. I owed the man a favor for saving me in Paris, but assaulting a medieval monstrosity single-handedly seemed extreme payback. Unfortunately, I had little choice. I needed help in getting back my son, who’d been kidnapped, and getting free my wife, who had talked her way into L’Ouverture’s cell.