The Exploits of Arsène Lupin 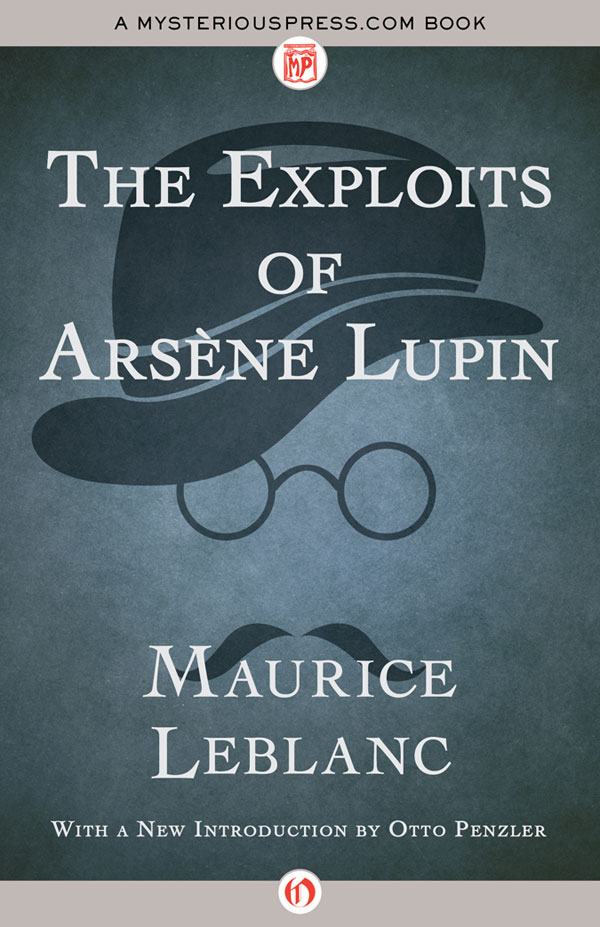 The Exploits of Arsène Lupin

IF MAURICE LEBLANC (1864–1941)
had done nothing except create Arsène Lupin—the rogue who has been wildly popular in France for more than a century—his place in the pantheon of French literature would still have been assured.

Born in Rouen, he was educated in France; Berlin, Germany; and Manchester, England, and studied law before becoming a hack writer and police reporter for French periodicals. His sister Georgette—a famous actress and singer—was the mistress of Maurice Maeterlinck, the noted dramatist, and it is possible that this relationship influenced Leblanc’s work; some critics claim that his plays are his most polished literary productions.

In 1906 Leblanc’s previously undistinguished career skyrocketed when he was asked to write a short story for a new journal and produced the first Lupin adventure. His subsequent success and worldwide fame culminated in his induction into the French Legion of Honor.

Reading his fiction today, one is generally impressed with the fast pace and diversified action, although it borders on burlesque, and the incredible situations and coincidences may be a little difficult to accept.

Unlike Fantômas, the other great criminal in French literature, Arsène Lupin is not violent or evil; his unlawful acts center on theft and clever cons rather than murder or anarchy.

A brilliant rogue, he pursues his career with carefree élan, mocking the law for the sheer joy of it rather than for purely personal gain. Young, handsome, brave, and quick-witted, he has a joie de vivre uniquely and recognizably French. His sense of humor and conceit make life difficult for the police, who attribute most of the major crimes in France to him and his gang of ruffians and urchins.

Like most French criminals and detectives, Lupin is a master of disguise. His skill is attested to by the fact that he once became Lenormand, chief of the Sûreté, and, for four years, conducted official investigations into his own activities. He employs numerous aliases, including Jim Barnett, Prince Renine, le Duc de Charmerace, Don Luis Perenna, and Ralph de Limezy; his myriad names, combined with his brilliant costumes, make it nearly impossible for the police to identify him (the reader of his exploits sometimes encounters a similar difficulty).

After a long criminal career of uninterrupted successes, Lupin begins to shift position and aids the police in their work—usually for his own purposes and without their knowledge. Toward the end of his career, he becomes a full-fledged detective, and although he is as successful in his endeavors as ever before, his heart does not seem to be in it.

There are many early screen versions of Arsène Lupin’s basic conflicts with the Paris police, both in the United States, starting in 1917, and in Europe.
The Teeth of the Tiger
(Paramount, with David Powell) of 1919 is an old-dark-horse murder melodrama with sliding panels, secret passageways, and serial-like thrills. Wedgewood Nowell portrays Lupin in
813
(Robertson-Cole, 1920), in which Lupin impersonates a police officer to clear himself of a murder charge. There are several later European Lupins, notably French, in films even until the 1950s. The most important American Lupin films are given below.

Arsène Lupin.
MGM, 1932. John Barrymore, Lionel Barrymore, Karen Morley, John Miljan. Directed by Jack Conway. Based on the play by Leblanc and Francis de Croisset. When the silk-hatted Lupin announces that he will steal a famous painting from the Louvre under the nose of the police, and does so, the chief of detectives uses a pretty lady crook to lure him into a trap.

Arsène Lupin Returns.
MGM, 1938. Melvyn Douglas, Warren William, Virginia Bruce, Monty Woolley, E. E. Clive. Directed by George Fitzmaurice. The signature of Arsène Lupin, long thought dead, is scrawled across a safe from which a necklace has been stolen; the real Lupin, innocent and now living as a country gentleman, is as perplexed as the police are.

Enter Arsène Lupin.
Universal, 1944. Charles Korvin, Ella Raines, J. Carrol Naish, Gale Sondergaard, Miles Mander. Directed by Ford Beebe. International thief Lupin, on a train from Istanbul to Paris, steals an emerald from a young heiress but returns it when he begins to suspect that the girl’s aunt and uncle plan to murder her.

I. The Arrest of Arsène Lupin

It was a strange ending to a voyage that had commenced in a most auspicious manner. The transatlantic steamship ‘La Provence’ was a swift and comfortable vessel, under the command of a most affable man. The passengers constituted a select and delightful society. The charm of new acquaintances and improvised amusements served to make the time pass agreeably. We enjoyed the pleasant sensation of being separated from the world, living, as it were, upon an unknown island, and consequently obliged to be sociable with each other.

Have you ever stopped to consider how much originality and spontaneity emanate from these various individuals who, on the preceding evening, did not even know each other, and who are now, for several days, condemned to lead a life of extreme intimacy, jointly defying the anger of the ocean, the terrible onslaught of the waves, the violence of the tempest and the agonizing monotony of the calm and sleepy water? Such a life becomes a sort of tragic existence, with its storms and its grandeurs, its monotony and its diversity; and that is why, perhaps, we embark upon that short voyage with mingled feelings of pleasure and fear.

But, during the past few years, a new sensation had been added to the life of the transatlantic traveler. The little floating island is now attached to the world from which it was once quite free. A bond united them, even in the very heart of the watery wastes of the Atlantic. That bond is the wireless telegraph, by means of which we receive news in the most mysterious manner. We know full well that the message is not transported by the medium of a hollow wire. No, the mystery is even more inexplicable, more romantic, and we must have recourse to the wings of the air in order to explain this new miracle. During the first day of the voyage, we felt that we were being followed, escorted, preceded even, by that distant voice, which, from time to time, whispered to one of us a few words from the receding world. Two friends spoke to me. Ten, twenty others sent gay or somber words of parting to other passengers.

On the second day, at a distance of five hundred miles from the French coast, in the midst of a violent storm, we received the following message by means of the wireless telegraph:

At that moment, a terrible flash of lightning rent the stormy skies. The electric waves were interrupted. The remainder of the dispatch never reached us. Of the name under which Arsène Lupin was concealing himself, we knew only the initial.

If the news had been of some other character, I have no doubt that the secret would have been carefully guarded by the telegraphic operator as well as by the officers of the vessel. But it was one of those events calculated to escape from the most rigorous discretion. The same day, no one knew how, the incident became a matter of current gossip and every passenger was aware that the famous Arsène Lupin was hiding in our midst.

Arsène Lupin in our midst! the irresponsible burglar whose exploits had been narrated in all the newspapers during the past few months! the mysterious individual with whom Ganimard, our shrewdest detective, had been engaged in an implacable conflict amidst interesting and picturesque surroundings. Arsène Lupin, the eccentric gentleman who operates only in the chateaux and salons, and who, one night, entered the residence of Baron Schormann, but emerged empty-handed, leaving, however, his card on which he had scribbled these words: “Arsène Lupin, gentleman-burglar, will return when the furniture is genuine.” Arsène Lupin, the man of a thousand disguises: in turn a chauffer, detective, bookmaker, Russian physician, Spanish bull-fighter, commercial traveler, robust youth, or decrepit old man.

Then consider this startling situation: Arsène Lupin was wandering about within the limited bounds of a transatlantic steamer; in that very small corner of the world, in that dining saloon, in that smoking room, in that music room! Arsène Lupin was, perhaps, this gentleman … or that one … my neighbor at the table … the sharer of my stateroom …

“And this condition of affairs will last for five days!” exclaimed Miss Nelly Underdown, next morning. “It is unbearable! I hope he will be arrested.”

Then, addressing me, she added:

“And you, Monsieur d’Andrézy, you are on intimate terms with the captain; surely you know something?”

I should have been delighted had I possessed any information that would interest Miss Nelly. She was one of those magnificent creatures who inevitably attract attention in every assembly. Wealth and beauty form an irresistible combination, and Nelly possessed both.

Educated in Paris under the care of a French mother, she was now going to visit her father, the millionaire Underdown of Chicago. She was accompanied by one of her friends, Lady Jerland.

At first, I had decided to open a flirtation with her; but, in the rapidly growing intimacy of the voyage, I was soon impressed by her charming manner and my feelings became too deep and reverential for a mere flirtation. Moreover, she accepted my attentions with a certain degree of favor. She condescended to laugh at my witticisms and display an interest in my stories. Yet I felt that I had a rival in the person of a young man with quiet and refined tastes; and it struck me, at times, that she preferred his taciturn humor to my Parisian frivolity. He formed one in the circle of admirers that surrounded Miss Nelly at the time she addressed to me the foregoing question. We were all comfortably seated in our deck-chairs. The storm of the preceding evening had cleared the sky. The weather was now delightful.

Siberia by Ann Halam
OMEGA Guardian by Stephen Arseneault
Meeting the Enemy by Richard van Emden
Demonic Angel (A Touch Of Magic) by Maria Del Sette
DR08 - Burning Angel by James Lee Burke
The Toyotomi Blades by Dale Furutani
The Queen of Everything by Deb Caletti
Urien's Voyage by André Gide
Spark - ARC by Anthea Sharp
Taking Whatever He Wants: The Cline Brothers of Colorado by UNKNOWN