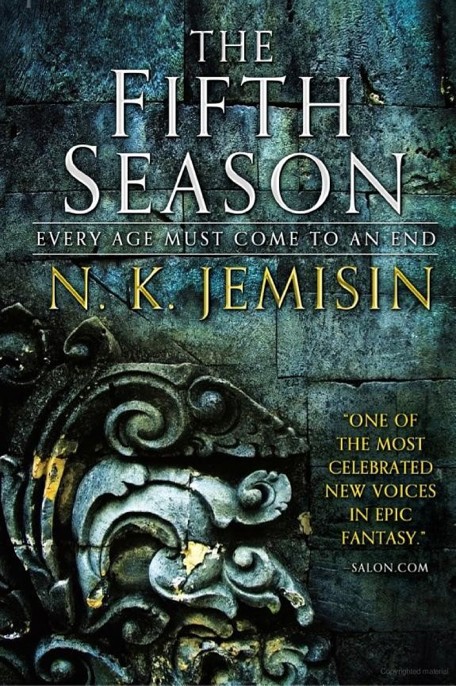 A Preview of
The Hundred Thousand Kingdoms

A Preview of
The Killing Moon

L
ET’S START WITH THE END
of the world, why don’t we? Get it over with and move on to more interesting things.

First, a personal ending. There is a thing she will think over and over in the days to come, as she imagines how her son died and tries to make sense of something so innately senseless. She will cover Uche’s broken little body with a blanket—except his face, because he is afraid of the dark—and she will sit beside it numb, and she will pay no attention to the world that is ending outside. The world has already ended within her, and neither ending is for the first time. She’s old hat at this by now.

What she thinks then, and thereafter, is:
But he was free.

And it is her bitter, weary self that answers this almost-question every time her bewildered, shocked self manages to produce it:

He wasn’t. Not really. But now he will be.

Here is a land.

It is ordinary, as lands go. Mountains and plateaus and canyons and river deltas, the usual. Ordinary, except for its size and its dynamism. It moves a lot, this land. Like an old man lying restlessly abed it heaves and sighs, puckers and farts, yawns and swallows. Naturally this land’s people have named it
the Stillness
. It is a land of quiet and bitter irony.

The Stillness has had other names. It was once several other lands. It’s one vast, unbroken continent at present, but at some point in the future it will be more than one again.

The end begins in a city: the oldest, largest, and most magnificent living city in the world. The city is called Yumenes, and once it was the heart of an empire. It is still the heart of many things, though the empire has wilted somewhat in the years since its first bloom, as empires do.

Yumenes is not unique because of its size. There are many large cities in this part of the world, chain-linked along the equator like a continental girdle. Elsewhere in the world villages rarely grow into towns, and towns rarely become cities, because all such polities are hard to keep alive when the earth keeps trying to eat them… but Yumenes has been stable for most of its twenty-seven centuries.

Yumenes is unique because here alone have human beings dared to build not for safety, not for comfort, not even for beauty, but for bravery. The city’s walls are a masterwork of delicate mosaics and embossing detailing its people’s long and brutal history. The clumping masses of its buildings are punctuated by great high towers like fingers of stone, hand-wrought lanterns powered by the modern marvel of hydroelectricity, delicately
arching bridges woven of glass and audacity, and architectural structures called
balconies
that are so simple, yet so breathtakingly foolish, that no one has ever built them before in written history. (But much of history is unwritten. Remember this.) The streets are paved not with easy-to-replace cobbles, but with a smooth, unbroken, and miraculous substance the locals have dubbed
asphalt
. Even the shanties of Yumenes are daring, because they’re just thin-walled shacks that would blow over in a bad windstorm, let alone a shake. Yet they stand, as they have stood, for generations.

At the core of the city are many tall buildings, so it is perhaps unsurprising that one of them is larger and more daring than all the rest combined: a massive structure whose base is a star pyramid of precision-carved obsidian brick. Pyramids are the most stable architectural form, and this one is pyramids times five because why not? And because this is Yumenes, a vast geodesic sphere whose faceted walls resemble translucent amber sits at the pyramid’s apex, seeming to balance there lightly—though in truth, every part of the structure is channeled toward the sole purpose of supporting it. It
looks
precarious; that is all that matters.

The Black Star is where the leaders of the empire meet to do their leaderish things. The amber sphere is where they keep their emperor, carefully preserved and perfect. He wanders its golden halls in genteel despair, doing what he is told and dreading the day his masters decide that his daughter makes a better ornament.

None of these places or people matter, by the way. I simply point them out for context.

But here is a man who will matter a great deal.

You can imagine how he looks, for now. You may also imagine what he’s thinking. This might be wrong, mere conjecture, but a certain amount of likelihood applies nevertheless. Based on his subsequent actions, there are only a few thoughts that could be in his mind in this moment.

He stands on a hill not far from the Black Star’s obsidian walls. From here he can see most of the city, smell its smoke, get lost in its gabble. There’s a group of young women walking along one of the asphalt paths below; the hill is in a park much beloved by the city’s residents. (
Keep green land within the walls,
advises stonelore, but in most communities the land is fallow-planted with legumes and other soil-enriching crops. Only in Yumenes is greenland sculpted into prettiness.) The women laugh at something one of them has said, and the sound wafts up to the man on a passing breeze. He closes his eyes and savors the faint tremolo of their voices, the fainter reverberation of their footsteps like the wingbeats of butterflies against his sessapinae. He can’t sess all seven million residents of the city, mind you; he’s good, but not that good. Most of them, though, yes, they are there.
Here
. He breathes deeply and becomes a fixture of the earth. They tread upon the filaments of his nerves; their voices stir the fine hairs of his skin; their breaths ripple the air he draws into his lungs. They are on him. They are in him.

But he knows that he is not, and will never be, one of them.

“Did you know,” he says, conversationally, “that the first stonelore was actually
written
in stone? So that it couldn’t be changed to suit fashion or politics. So it wouldn’t wear away.”

“I know,” says his companion.

“Hnh. Yes, you were probably there when it was first set down, I forget.” He sighs, watching the women walk out of sight. “It’s safe to love you. You won’t fail me. You won’t die. And I know the price up front.”

His companion does not reply. He wasn’t really expecting a response, though a part of him hoped. He has been so lonely.

But hope is irrelevant, as are so many other feelings that he knows will bring him only despair if he considers them again. He has considered this enough. The time for dithering is past.

“A commandment,” the man says, spreading his arms, “is set in stone.”

Imagine that his face aches from smiling. He’s been smiling for hours: teeth clenched, lips drawn back, eyes crinkled so the crow’s feet show. There is an art to smiling in a way that others will believe. It is always important to include the eyes; otherwise, people will know you hate them.

He speaks to no one in particular, but beside the man stands a woman—of sorts. Her emulation of human gender is only superficial, a courtesy. Likewise the loose drapelike dress that she wears is not cloth. She has simply shaped a portion of her stiff substance to suit the preferences of the fragile, mortal creatures among whom she currently moves. From a distance the illusion would work to pass her off as a woman standing still, at least for a while. Up close, however, any hypothetical observer would notice that her skin is white porcelain; that is not a metaphor. As a sculpture, she would be beautiful, if too relentlessly realistic for local tastes. Most Yumenescenes prefer polite abstraction over vulgar actuality.

When she turns to the man—slowly; stone eaters are slow aboveground, except when they aren’t—this movement pushes her beyond artful beauty into something altogether different. The man has grown used to it, but even so, he does not look at her. He does not want revulsion to spoil the moment.

“What will you do?” he asks her. “When it’s done. Will your kind rise up through the rubble and take the world in our stead?”

“Few of us are interested in that. Anyway, you’ll still be here.”

The man understands that she means you in the plural.
Your kind. Humanity.
She often treats him as though he represents his whole species. He does the same to her. “You sound very certain.”

She says nothing to this. Stone eaters rarely bother stating the obvious. He’s glad, because her speech annoys him in any case; it does not shiver the air the way a human voice would. He doesn’t know how that works. He doesn’t
care
how it works, but he wants her silent now.

He wants
everything
silent.

And then he reaches forth with all the fine control that the world has brainwashed and backstabbed and brutalized out of him, and all the sensitivity that his masters have bred into him through generations of rape and coercion and highly unnatural selection. His fingers spread and twitch as he feels several reverberating points on the map of his awareness: his fellow slaves. He cannot free them, not in the practical sense. He’s tried
before and failed. He can, however, make their suffering serve a cause greater than one city’s hubris, and one empire’s fear.