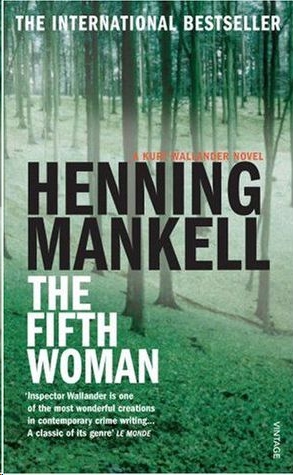 Table of Contents
Cover
Copyright
About the Author
Also by Henning Mankell
The Fifth Woman
Africa – Sweden: May – August 1993
Prologue
Skåne: 21 September – 11 October 1994
Chapter 1
Chapter 2
Chapter 3
Chapter 4
Chapter 5
Chapter 6
Chapter 7
Chapter 8
Chapter 9
Chapter 10
Chapter 11
Chapter 12
Skåne: 12 – 17 October 1994
Chapter 13
Chapter 14
Chapter 15
Chapter 16
Chapter 17
Chapter 18
Chapter 19
Chapter 20
Chapter 21
Chapter 22
Chapter 23
Chapter 24
Skåne: 17 October – 3 November 1994
Chapter 25
Chapter 26
Chapter 27
Chapter 28
Chapter 29
Chapter 30
Chapter 31
Chapter 32
Chapter 33
Chapter 34
Chapter 35
Chapter 36
Skåne: 4 – 5 December 1994
Epilogue
This eBook is copyright material and must not be copied, reproduced, transferred, distributed, leased, licensed or publicly performed or used in any way except as specifically permitted in writing by the publishers, as allowed under the terms and conditions under which it was purchased or as strictly permitted by applicable copyright law. Any unauthorised distribution or use of this text may be a direct infringement of the author’s and publisher’s rights and those responsible may be liable in law accordingly.
Epub ISBN: 9781407064420
Version 1.0
www.randomhouse.co.uk
Published by Vintage 2009
2 4 6 8 10 9 7 5 3 1
Copyright © Henning Mankell, 2000 and 2003
English translation © Steven T. Murray, 2003
Henning Mankell has asserted his right under the Copyright, Designs and Patents Act 1988 to be identified as the author of this work
This book is sold subject to the condition that it shall not, by way of trade or otherwise, be lent, resold, hired out, or otherwise circulated without the publisher’s prior consent in any form of binding or cover other than that in which it is published and without a similar condition, including this condition, being imposed on The subsequent purchaser
First published in Great Britain in 2003 by The Harvill Press
Vintage
Random House, 20 Vauxhall Bridge Road,
London SW1V 2SA
www.vintagebooks.co.uk
Addresses for companies within The Random House Group Limited can be found at:
www.randomhouse.co.uk/offices.htm
The Random House Group Limited Reg. No. 954009
A CIP catalogue record for this book is available from the British Library
ISBN 9780099535294
The Random House Group Limited supports The Forest Stewardship Council (FSC), the leading international forest certification organisation. All our titles that are printed on Greenpeace approved FSC certified paper carry the FSC logo.
Our paper procurement policy can be found at:
www.rbooks.co.uk/environment
Printed and bound in Great Britain by
CPI Cox & Wyman, Reading RG1 8EX
About the Author
Henning Mankell is the prize-winning and internationally acclaimed author of the Inspector Wallander Mysteries, now dominating bestseller lists throughout Europe. He devotes much of his time to working with Aids charities in Africa, where he is also director of the Teatro Avenida in Maputo.
Steven T. Murray has translated numerous works from the Scandinavian languages, including the Pelle the Conqueror series by Martin Andersen Nexø and three of Henning Mankell’s Kurt Wallander novels. He is Editor-in-Chief of Fjord Press in Seattle.
ALSO BY HENNING MANKELL
Fiction
Faceless Killers
The Dogs of Riga
The White Lioness
The Man Who Smiled
Sidetracked
One Step Behind
The Return of the Dancing Master
Before the Frost
Chronicler of the Winds
Depths
Kennedy’s Brain
The Eye of the Leopard
Non-fiction
I Die, But the Memory Lives On
Young Adult Fiction
A
Bridge to the Stars
Shadows in the Twilight
When the Snow Fell
“I saw God in a dream and He had two faces. One was soft and kind like a mother’s face, and the other looked like the face of Satan.”
From
The Fall of the Imam
, by Nawal El Saadawi
“With love and care the spiderweb weaves its spider.”
African proverb

The Complete Works of Stephen Crane by Stephen Crane
Angelic Pathways by Chantel Lysette
Completing the Pass by Jeanette Murray
Mariah Mundi and the Ghost Diamonds by G.P. Taylor
Checkered Thief (A Laurel London Mystery Book 3) by Kappes, Tonya
A Breath of Snow and Ashes by Diana Gabaldon
The Sassy Belles by Beth Albright
Wishing on Willows: A Novel by Ganshert, Katie
Lost in the Moment (A Savioe Family Novel) by Ginny Atkinson
Coming Home for Christmas by Patricia Scanlan