Read The Forge in the Forest Online

The Forge in the Forest 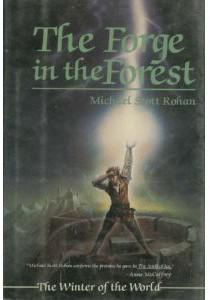 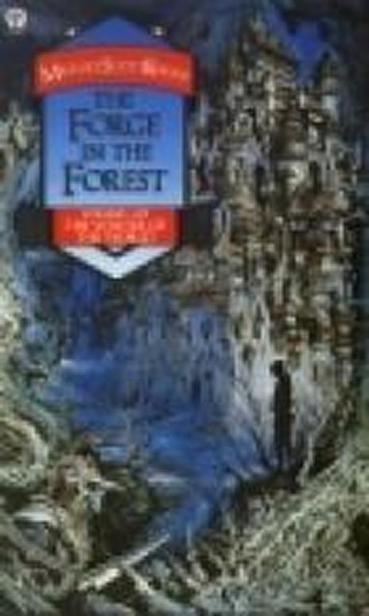 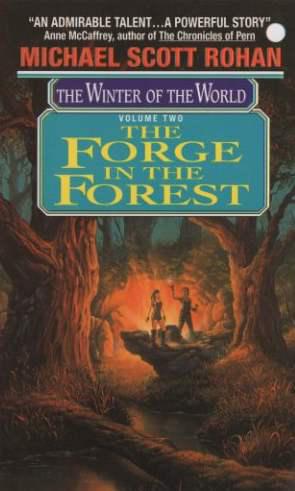 The Winter of the World
Trilogy
Volume 1:
The Anvil of Ice
Volume 3:
The Hammer of the Sun

Chase the Morning
The Gates of Noon

AVON BOOKS: A division of The Hearst Corporation 1350 Avenue of the Americas New York, New York 10019

Published by arrangement with William Morrow and Company, Inc.

All rights reserved, which includes the right to reproduce this book or portions thereof in any form whatsoever except as provided by the U.S. Copyright Law. For information address Permissions Department, William Morrow and Company, Inc., 1350 Avenue of the Americas, New York, New York 10019.

Chapter One
- The Kindling

Chapter Three
- The Ocean of Trees

Chapter Five
- The Halls of Summer

Chapter Six
- The Snow on the Forest

Chapter Seven
- The River of Night

Chapter Eleven
- The Mold is Broken

Between youth and maturity comes a time of questing and discovery; between apprenticeship and mastery comes journeying. Of the strange apprentice years of the magesmith Elof their great and terrible achievements and their uncanny ending, the Winter Chronicles tell in the Book of the Sword. But when that storm was past, and months of sickness drew to an end, the desire of his heart awoke in Elof once more, and he was free to heed it. And it is of that desire, and the long quest it led him, even along the byways of the years, that is told in the Book of the Helm.

Chapter One
- The Kindling

It was the seawind woke him, as his head drooped lower over the close-scrawled book. Through the open upper door of the smithy it gusted, flattening the hearthfire, guttering the rushlamps, and it breathed a sudden chill upon his bare neck. He sat up sharply, blinking in the wavering lamplight, with the queasy alertness of the suddenly awakened. He had been elsewhere, somewhere far away, black marshes or bleak mountains, chasing a shadow out of his past, a shadow that vanished before him, shifted shape in his grasp, reformed and reappeared at his back, forever close, forever out of reach…

There came the soft thud of a book closing, and impatiently he shook off the moment of nightmare. "How goes the night?" he asked, without turning his head.

"At its accustomed pace," came Roc's calm reply. "An hour before the middle hour it has reached, by my glass. Time you were abed, by Ils' iron command. Marja and old Hjoran are off long since. And tomorrow is my lord Kermorvan's day; sleep, if you would be fresh for that."

"A grand mimic you were, then, but a minute gone…"

"I mean, I dare not. Not now, with my mind so weighed down by thoughts and cares. My very dreams are poisoned."

"You've found naught to help you, then?"

Elof shook his head. "No, nothing. And you?"

Roc rose, stumped over to a bench heaped with great tomes, and slapped down the one he had been reading upon the highest pile. "The same. Much fascinating, much I do not understand, but nothing bearing upon your concern." He peered at the boxes of scrolls beside Elof's table, and leaned over his shoulder. "Not so many of those left, either. What's that one all about? Doesn't look promising. Pity our late unlamented master didn't bring more of his precious library south with him. It'll all be moldering away in the old tower now…"

"If the duergar have not seized the place," said Elof. "Or… others."

"The Ice, you mean?" said Roc softly, and glanced involuntarily out into the dark beyond the stable door. "Doubt the books have much to tell it."

"Aye, but there are other things there. We did not find that helm I made, the Tarnhelm, among the Mastersmith's effects. And that too was a work of power…"

Roc shrugged. "It had its uses, for passing unseen. And somehow shifting place, if what you saw the night of its making was right…"

"It was," answered Elof, heavily. "And on the Ice, also. Here is a scroll Ingar must have consulted in planning the helm—see, it bears the very chalkmarks from his soiled sleeves…" He stopped a moment, caught his breath. Roc said nothing. "This is a treatise on the power of masks, with annotations by the Mastersmith of much he learned among the Ekwesh, of transforming the wearer into his own living symbol. If I understand aright, such transformation must be the root of the helm's whole power. You remember the virtues he had me set upon it?
Of concealment, of change, of moving subtly and unseen
… It was that which haunted my dream, the understanding at last how that helm must act, how powerful it truly is. The helm is a mask, a perfect mask, a concealment shaped by its wearer's own image of himself. Let him think of shadow, and he is unseen. Let him think of a shape, and it masks his own. Let him think of being somewhere else, and he is masked in that thought; he is there…"

Roc swallowed. "A fell power to wear with a light heart. I think of many places I would as soon never be. Ach, but the duergar'll know what to do with it, if any can…"

"I do not think they have it."

Roc eyed him sharply. "You've reason, by your tone. What then?"

Elof sighed deeply. "You saw as I did, that last hour. Two swans flew up, flew eastward…"

"You made but one helm."

"Kara wore a cloak when first I met her, ere the helm was made, and its lining was black swan's down. But Louhi wore no such cloak. And why would they ride horses over such rough country, and when visiting an ally, if both could shift their shape and fly? It may be, it may well be that Louhi came that night to command the Mastersmith to make her something that matched Kara's power." He stood up, and the precious parchment crumpled in the convulsion of his powerful fingers, the rod of thick wood at its center creaked and snapped. He looked at it in annoyance, and cast it down upon the table, twisted as the ruined black blade before him. "You see now why I must follow her so urgently, whoever, whatever she truly is? Once more a great power of my making is put into evil hands. Once more must I find it, and if need be destroy it. And she is my only link to Louhi. Even if I did not wish to free Kara, still I would have to follow her, find her. Even if I did not love her."

Roc pursed his lips and looked away, as he might from the sudden blaze of his forgefire. Gently he ran a finger along the tortured metal before him. "Well, for such a task you'll need your strange sword made whole, right enough. Few in the world could have cloven as that one did in your last need." He stretched, and yawned loudly. "But for now, do you try to rest, at least. Tired eyes may miss what's plain by daylight."

Elof breathed out a long breath, and nodded. "True enough. Very well. I'll try, but not this moment. I'll sit up awhile and mend the hilt, at least, if there's no more to be done now. Work of the hands will clear the brain."

When Roc had gone Elof smoothed out the crumpled scroll and stowed it carefully. Then he sighed, and turned to the hilt. The sheer force of the blow that had twisted the sword had shivered loose the plain silvered wires of the grip; gone was their cloudy, stormy sheen, racing and beautiful as the marshland skies beneath which they were made. He thought a moment, reached for his precious tool pack and bore it to a workbench by the window. There Marja, old Hjoran's girl journeyman, kept her work. Instead of the blackened instruments of the forge, delicate grippers, thin files and fine-tipped burins were laid out in neat racks, for Marja was an accomplished jeweler. Elof chose a delicate blade and from a side pocket he drew a fold of stiff leather; a few dry leaf needles fell from one end, and he opened it with minute care. Within it lay a dry sprig of the redwood tree, almost naked of its needles save for one small twig, and this he carefully severed. He laid it upon a polished stone slab, brushed across it a subtle paste of eggwhite and gums thinned with strongest spirits, and laid across it a light leaf of hammered silver, finer than finest parchment. He breathed gently on this, till a ghostly outline of the twig showed through, and then with fine-tipped tools he began to smooth it down, patiently working it close around the outline of every needle, turning it over and adding more leaf till the twig was wholly encased, enshrined.

Now it looked like the talisman it had been. Little power seemed left to it, but it was too precious a thing to discard entirely.
While there are leaves on it, even withered and dead, something of the virtue of forests will cling to it
… He smiled. "But no autumn wind shall unfix these last leaves. A silver season sets them in place, and I will bear them with me wherever I go." These words he spoke over his work, and then unwinding the wires he fastened the twig about the grip, and set the wires tightly in place above it once more. It felt as solid as before, but Elof scowled as he took it in his hand. What was it without the blade it bore? He tossed it down in disgust. The night was silent now, save for the rising whine of the wind, bearing with it the distant sound of the wavelets in the harbor, the clopping hooves of some benighted rider on the cobbled streets. Sleep seemed further fled than ever from his mind, so sharply the need
to
learn spurred him. Impatiently he snatched up another scroll. It proved to be a wordy treatise on extracting metals from ores, and, save for a long chapter on the strange forces set moving by iron and copper in corrosives, it was dull stuff. And before him on the table sat the sword, the precious blade he had not made for himself, but had taken from a long-dead hand. It lay there like a mute accusation. Was he worthy to wield such a thing, if he, a smith of craft and power, could not reforge it?