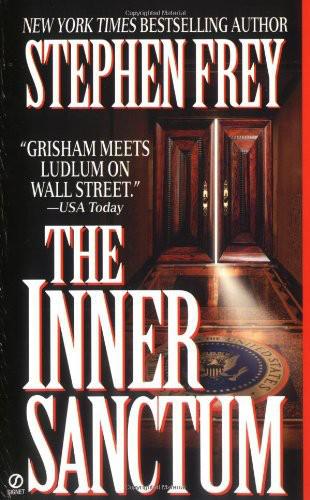 Lori Lipsky, my editor, for her outstanding contributions.

Michael Pocalyko for his tireless assistance with this project.

Cynthia Manson, my literary agent, for all her work.

Stephen Watson for his counsel.

The man sat calmly in a large leather chair at the edge of the lamp's faint arc of light. He inhaled deeply, held his breath for several moments, then slowly tilted his head back and blew thick, pungent smoke toward the ceiling. He was in no rush. He had negotiated many times before and was acutely aware of the value gained from projecting indifference in these situations.

David Mitchell peered through the gloom at the figure in the leather chair, but could distinguish little except the indistinct outline of the man's body and the glow of a cigar tip as it moved. David wanted to push the meeting forward but said nothing for fear he might give away his impatience--and in the process, the deal.

"So what is my incentive?" the man finally asked, his gravelly voice filtering through the smoke-laden air.

"Two million dollars," David answered. "A million when the contract is signed and another million when full production begins."

"Two million dollars." The man chewed on the words for a moment, then spat them out. "You've asked a great deal of me. I don't think two million is enough." He tapped the cigar gently on the side of a crystal bowl and a perfectly symmetrical inch-long ash fell into it.

"How much is enough?"

David drew in a long breath. He was annoyed at the lack of progress but tried not to make it obvious. "Can you really deliver?" It was a bold question, and despite the dim light he noticed the man's relaxed posture suddenly stiffen.

"Of course I can." The voice was still steady but now conveyed a repressed anger at the younger man's audacity.

"How can I be certain?" David asked quickly, sensing that he had struck a nerve.

"You can't be certain. You just have to trust me."

"Impossible. There can be no guarantees."

"Perhaps I've made a mistake in coming here." Instantly, David wished he could have taken back the words.

The man reclined into the chair. "Fine," he said confidently. "Then leave."

David felt a drop of perspiration trickle from the end of his eyebrow slowly down the right side of his face. He couldn't enter into a transaction on such fragile terms. But he couldn't walk away from it either.

The man saw David's indecision and made his move. "What you get for your money, Mr. Mitchell, is my ability to act alone. And don't underestimate how important that is. It's what makes this situation attractive to you. There will be no time wasted on fact-finding missions and no committees adding years to the process." His tone intensified. "Don't think for a minute I'm being greedy requiring more than two million dollars for my participation. If I decide to accept your proposal, what you pay me will be nothing more than a rounding error on your profit statement."

A rush of anticipation surged through David. That was true. The payoff would be immense. "Then how much do you require?" He asked the critical question once more.

The man shook his head. "Come back to me with a revised proposal. Work through our mutual acquaintance."

"But time is of the essence. I want to know what you require now." David felt the protective wall around his emotions crumbling, and his left eye blinked once--involuntarily.

If the face hadn't been cloaked in shadows, David would have noticed the trace of a smile turn the corners of the man's mouth up. The blink of the eye--the crack in Mitchell's countenance--had not gone unnoticed. "I won't suggest a number. I never do." He pointed the smoldering cigar tip at David. "But I'm becoming impatient. Make certain your next offer is your best offer."

David nodded, realizing there would be no end to the negotiation tonight. "All right, I will."

Mitchell had scored higher on the psychiatric exam than anyone in the firm's history. Now the man saw why. Despite excruciating pressure, Mitchell was maintaining his demeanor admirably. There had only been that drop of perspiration and tic of his eye. Most of his predecessors had fallen apart by now. "You're doing the right thing, Mr. Mitchell," the man said gently. He didn't give a damn about Mitchell, but spoke the words compassionately to manipulate the younger man's emotions. It was business, that was all. They wanted Mitchell for the long term. They wanted him locked in now, not getting cold feet later and accidentally saving himself. "You're definitely doing the right thing."

"Without a big hit like this one they'd crucify you. They'd let you bleed up there on the cross until you expired, then they'd burn you. And believe me, you wouldn't rise from the ashes. There would be no phoenix story here."

"I know," David said again, this time through clenched teeth. The man was absolutely right. The pressure was intense. Without a strong performance, much stronger than he had shown so far, he would be terminated, and there wouldn't be another job--not like this one anyway.

The man puffed on his cigar. Someday, if Mitchell proved worthy, they might allow him insight into the bigger picture. They might let him see why one had to win and the other lose. And they might let him understand how they could make that happen.

David rose from his chair. It seemed obvious the meeting was over.

David turned back as he reached the door. "Yes?"

"I want you to understand two things before you leave."

"First, I've never used my position this way before. I am entirely ethical. I am not corrupt."

The man's eyes narrowed as he sensed skepticism. "Second, I'm considering your proposal because I believe it is in the country's best interest. Money is not the driving force in this situation, not my primary motivation."

For an instant David thought he saw the face, but then it faded into darkness again. "What are you talking about?"

"My paramount concern is national security. And I'm willing to use any means necessary to achieve that end. That is why I'm willing to consider your proposal. The money is secondary. Do you understand?"

"Yes." David stared at the dark figure, marveling at the man's ability to rationalize. At his ability to avow with sincerity that $2 million--or whatever the number turned out to be--wasn't the real issue. "I'll be back to you tomorrow through our mutual acquaintance."

David stepped into the deserted corridor and closed the door. Cool fresh air rushed to his face, and for a few moments he stood there cleansing his lungs of cigar smoke, allowing his heart rate to slow down. It had taken immense courage to proceed with this meeting. Christ, the whole thing could have been a setup.

Finally he began walking away, the sound of his hard soles on marble echoing into the far recesses of the corridor. But it hadn't been a setup, and now the final piece was almost in place. By tomorrow night all the hard work, planning, and payoffs would begin returning dividends.

"That's quite a caseload you're lugging home tonight, Jesse." Neil Robinson, branch chief of the city's Office of Internal Revenue, nodded at the young woman's overloaded bag as the two of them threaded their way through the after-work crowd spilling onto Baltimore's downtown sidewalks.

"Oh, I just threw a bunch of old files in there before we left to impress you," Jesse laughed, as they dodged several men in suits coming around a corner. "I want you to think I'm working hard so you'll get me a new grade and I can get a raise."

"You've got to be kidding. I just got you your new grade two months ago. And you got your raise then." Robinson tried to sound annoyed but turned his head so she wouldn't see him smile. He knew full well the files in her bag were active. Jesse Hayes and her friend Sara Adams were the hardest working revenue agents at the branch. But somehow Jesse consistently combined her amazing efficiency with a contagious smile and a positive attitude--something Sara couldn't always manage.

"Pull a few strings for me, Neil," Jesse said, yanking the bag's strap higher on her shoulder. "Aren't I worth it?"

"Of course you are, but that isn't how the government works. They don't care what you're worth, just how long you've been around."

"That doesn't sound very encouraging." Jesse grinned. "How am I going to feed my four children?"

Robinson raised an eyebrow. "Jesse, when did you have children?"

"When I decided this would be a good time to go for another raise."

Robinson shook his head and laughed, then checked his watch. Five after six. He was five minutes late for his meeting with Gordon Roth. Robinson prided himself on being punctual, but tonight he was consciously late. Hopefully, Roth wouldn't wait around. "Where are you headed, Jesse?"

"Oh, right, business school," Robinson reminded himself. They stopped at a corner waiting for the light to change. "A master's degree in business." He looked at her proudly. "Sounds pretty good, doesn't it?"

The light changed and they moved ahead with the crowd.

"Fine, I guess. I shouldn't complain, but sometimes it isn't easy to sit in class for three hours after a day at the office." She sighed. "I hope having an M.B.A. will be worth all of this."

"Have patience," he said paternally. "It will be worth it in the long run."

Jesse recognized the delicate admonishment. "I know I shouldn't sound so frustrated, Neil. It's just a lot of pressure."

"Sure it is, but you have a way of finishing things you start. And nothing worth anything in life comes easily." He pulled a handkerchief from his suit pocket and wiped perspiration from around his mouth. Perhaps he should just skip the meeting with Roth altogether.

Jesse smiled at Robinson as they hurried up the street. They didn't have the typical supervisor-subordinate relationship. He was her boss, but a true friend as well. "You know I'll always be grateful to you for writing that recommendation, Neil. I think it made the difference in my being accepted at the Maryland Business School."

"Well, it was extremely important. A woman in the admissions office told me the recommendation had a big impact." Jesse paused. "And it's nice of you to let me leave early one day a week to attend the municipal finance course."

Robinson held up a hand. "Not a problem. Hell, you do more by noon than most of the others do in a full day. And that's not a criticism of them. They work hard too." For a moment Robinson and Jesse were separated as they made their way through a large tour group milling about in front of a hotel entrance. "When do you graduate?" he asked, as they came back together.

The Tomb of Zeus by Barbara Cleverly
Chain Reaction by Diane Fanning
Until You Are Dead by John Lutz
From Now Until Infinity (2) by Layne Harper
Private Pleasures by Vanessa Devereaux
Wild Is My Heart by Mason, Connie
The Menacers by Donald Hamilton
Good Curses Evil by Stephanie S. Sanders
The Interrogation Room by EB Jones
A Feast For Crows by George R. R. Martin