Read The Invention of Solitude Online

The Invention of Solitude 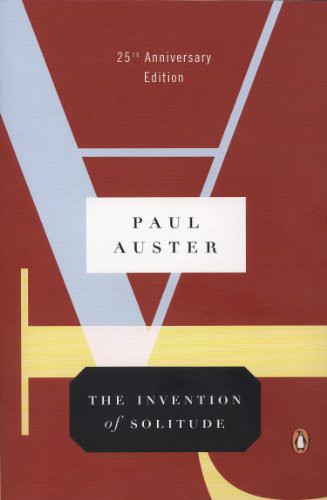 The Invention of Solitude

In this debut work by
New York Times
-bestselling author Paul Auster (
The New York Trilogy
),
The Invention of Solitude
, a memoir, established Auster’s reputation as a major new voice in American writing. His moving and personal meditation on fatherhood is split into two stylistically separate sections. In the first, Auster reflects on the memories of his father who was a distant, undemonstrative, and cold man who died an untimely death. As he sifts through his Father’s things, Auster uncovers a sixty-year-old murder mystery that sheds light on his father’s elusive character. In the second section, the perspective shifts and Auster begins to reflect on his own identity as a father by adopting the voice of a narrator, “A.” Through a mosaic of images, coincidences, and associations “A,” contemplates his separation from his son, his dying grandfather, turning the story into a self-conscious reflection on the process of writing.

Beginning with the deconstructed detective novels of the New York Trilogy, Paul Auster has proved himself to be one of the most adventurous writers in contemporary fiction. In book after book, he seems compelled to reinvent his style from scratch. Yet he always returns to certain preoccupations--most notably, solitude and coincidence--and these themes get a powerful workout in this early memoir. In the first half, "Portrait of an Invisible Man," Auster comes to terms with the death of his father, and as he investigates this elusive figure, he makes a rather shocking (and enlightening) discovery about his family's history. The second half, "The Book of Memory," finds the author on more abstract ground, toying with the entwined metaphors of coincidence, translation, solitude, and language. But here, too, the autobiographical element gives an extra kick to Auster's prose and keeps him from sliding off into armchair aesthetics. An eloquent, mesmerizing book.

THE INVENTION OF SOLITUDE

PAUL AUSTER is the author of the novels
The Brooklyn Follies
,
Oracle Night
,
The Book of Illusions
,
Timbuktu
,
Mr. Vertigo
,
Leviathan
(awarded the 1993 Prix Médicis Étranger),
The Music of Chance
(nominated for the 1991 PEN/Faulkner Award),
Moon Palace
,
In the Country of Last Things
, and the three novels known as “The New York Trilogy”:
City of Glass
,
Ghosts
, and
The Locked Room.
He has also written two memoirs (
The Invention of Solitude
and
Hand to Mouth
), a collection of essays, and a volume of poems, and edited the book
I Thought My Father Was God: And Other True Tales from NPR’s National Story Project.
Auster was the recipient of the 2006 Prince of Asturias Award for Letters and was inducted into the American Academy of Arts and Letters in 2006. He has won literary fellowships from the National Endowment for the Arts in both poetry and prose, and in 1990 received the Morton Dauwen Zabel Award from the American Academy and Institute of Arts and Letters. He wrote the screenplays for
Smoke
,
Blue in the Face
, and
Lulu on the Bridge
, which he also directed. His work has been translated into more than thirty languages. He lives in Brooklyn, New York.

PASCAL BRUCKNER, an essayist and novelist, is the author of
Evil Angles
,
The Tears of the White Man: Compassion as Contempt
, and
The Temptation of Innocence: Living in the Age of Entitlement.
He lives in Paris.

“Paul Auster, or The Heir Intestate” by Pascal Bruckner was published as the afterword to
L’lnvention de la Solitude
, Actes Sud, Paris. Copyright © 1992 by Actes Sud. The English translation by Karen Palmunen appeared in
Beyond the Red Notebook: Essays on Paul Auster
, edited by Dennis Barone, University of Pennsylvania Press, 1995. Used by permission of Actes Sud and the University of Pennsylvania Press.

The translations of poems by Stephane Mallarme originally appeared in
The Paris Review
78.

Printed in the United States of America
Set in Adobe Sabon

Except in the United States of America, this book is sold subject to the condition that it shall not, by way of trade or otherwise, be lent, resold, hired out, or otherwise circulated without the publisher’s prior consent in any form of binding or cover other than that in which it is published and without a similar condition including this condition being imposed on the subsequent purchaser.

The scanning, uploading and distribution of this book via the Internet or via any other means without the permission of the publisher is illegal and punishable by law. Please purchase only authorized electronic editions, and do not participate in or encourage electronic piracy of copyrighted materials. Your support of the author’s rights is appreciated.

THE INVENTION OF SOLITUDE

Portrait of an Invisible Man

The Book of Memory

Paul Auster
,
or The Heir Intestate

The Invention of Solitude
is both the
ars poetica
and the seminal work of Paul Auster. To understand him we must start here; all his books lead us back to this one. Novel-manifesto in two parts, “Portrait of an Invisible Man” and “The Book of Memory,” this work immediately sounds the theme of remorse.

Paul Auster was able to become a writer because his father left him a small inheritance that spared him a life of poverty. The father’s death not only liberated his son’s writing but literally saved his life. The son would never stop repaying this debt, would never finish reimbursing the deceased, in prose, for his fearsome gift. As payment Auster seeks to revive the image of this man he barely knew. The elder Auster, landlord by profession, was an absent character, “a block of impenetrable space in the form of a man” (7), an invisible being, “tourist of his own life” (9). One had the feeling that he never could be located, and he masked this evanescence with perpetual chatter. How could you be yourself in a world where your father was disengaged? This father remained a stranger to Auster, and made Auster a stranger to himself. His father had denied him the usual outlet of youth: rebellion, because one can’t rebel against a phantom. And the author, who had to lose his father in order to find him, would respond by filling his novels with figures of weak, colorless, pitiful parents, overwhelmed by their offspring and incapable of assuming fatherhood. Like Pinocchio snatching Geppetto from the jaws of the shark, Paul Auster would save his father from oblivion and, by giving him new life, justify his own existence.

As the story unfolds, sketching an increasingly more complex image of the deceased, one truth becomes evident: reaching one’s father requires work. By giving birth to his own parent through words, the author repairs a broken communication and makes it possible for himself, in turn, to become a father. In short, a subtle dialectic directs this plot. According to Auster, proximity is deceptive, and anonymity is not only the misfortune of the masses, or of the cities, but also a cancer gnawing away at the family and marital unit. Human contact often masks a gulf that only death or distance can bridge. We are separated from others by those very things that also connect us; we are separated from ourselves by the illusion of self-knowledge. Just as we must forget ourselves in order to reach a certain level of self-truth, we must also leave others in order to find them in the prism of memory or separation. That which is closest is often the most enigmatic, and distance, like mourning and wandering, is also an instrument of redemption.

The Last Train to Scarborough by Andrew Martin
Girl in a Band by Kim Gordon
Beware of Geeks Bearing Gifts by Charlie Cochet
Haunting Olivia by Janelle Taylor
I Still Love You by Jane Lark
One Hundred Percent Lunar Boy by Stephen Tunney
Shot in the Dark by Conner, Jennifer
TemptationinTartan by Suz deMello
The Man Who Was Thursday by G.K. Chesterton
Rafael's Suitable Bride by Cathy Williams