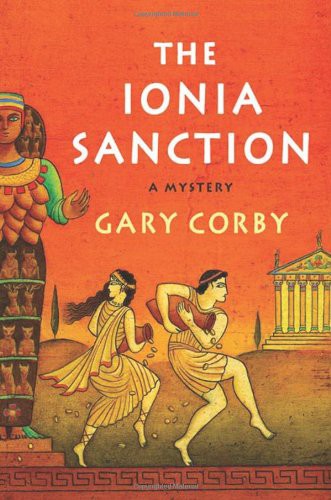 For Helen, Catriona, and Megan

The author is merely the point man in the team that creates a book. So many talented people have contributed to these mysteries.

First and foremost, thank you to my wife, Helen, and my daughters, Megan and Catriona. Without their support, love, and encouragement, there would be no books.

Janet Reid is the best literary agent any author could have. How she manages to do what she does is beyond me. She must be superhuman.

Joanna Volpe most generously critiqued
The Ionia Sanction
, taking time out from her own vastly successful agenting career to help me, with no hope of reward but my thanks.

Judith Engracia probed for logic holes in the plot and did an outstanding job. Meredith Barnes is lucky to retain her sanity after assisting with the booking of author events.

Anneke Klein and Bill Kirton read early versions of the book, and as always provided invaluable comments. Tehmina Goskar helped me with advice on early Zoroastrian rituals and beliefs.

Belinda Byrne, editor of the Australian edition at Penguin, has been an amazing support and provided great advice on the manuscript.

And finally, a big thank-you to the countless people who follow my book adventures online: who read and comment on my blog, and talk to me on the social networks. There are far too many to list, but you know who you are, and your support and encouragement make writing all the more fun.

A NOTE ON NAMES

Most modern names come from the Bible, a book which had yet to be written when my hero, Nico, walked the mean streets of Classical Athens. Quite a few people have asked me what’s the “right” way to say the ancient names in these stories. I’ll be getting hate mail from classical linguists for this, but the truth is, there is no right way. I hope you’ll pick whatever sounds happiest to you, and have fun reading the story.

For those who’d like a little more guidance, I’ve suggested a way to say each name in the character list. My suggestions do not match ancient pronunciation. They’re how I think the names will sound best in an English sentence.

That’s all you need to read the book. For those who’d like to know more about Greek names, I’ve included a short reference
here
.

Characters with an asterisk by their name were real historical people.

A Note on Names

A Note on Names

Evil deeds do not prosper; the slow man catches up with the swift.

I ran my finger along one foot of the corpse, then the other, making the body swing with a lazy, uncaring rhythm. I stared at his feet, my nose so close I went cross-eyed as the toes swung my way.

“He was like this when you found him?” I asked.

“I touched nothing,” Pericles said, “except to confirm Thorion was dead.”

“Are there any sons?” I asked.

“One, of twenty-four years. He’s at the family estate, according to the head slave.”

Thorion had died hard. He hung from a rope tied to a crossbeam in the low ceiling. A stool lay toppled below. The fall was nowhere near enough to snap his neck; instead he’d strangled. He must have changed his mind after the air was cut off, because there were deep red scratch marks in his throat where he’d tried and failed to relieve the pressure. Yet his arms were long enough to have reached the beam to pull himself up and call for help. Why hadn’t he?

There was no answer to my question, except the high-pitched wails and long, low moans that had assaulted my ears ever since I arrived. They came from the women’s quarters across the inner courtyard. The wife and girl-children had begun screaming the moment they’d learned their husband and father was dead. They would screech, tear their clothes, and pull their shorn hair every waking moment until he was cremated. The caterwauling meant that by now the whole street knew Thorion was dead.

I stepped across to the narrow window facing onto the street. A small group stood below; citizens, and their slaves holding torches, the black smoke floating up to me with the distinctive bittersweet aroma of burning rag soaked in olive oil. The crowd would have entered the house by now but for the two city guards who stood at the door. The moment they were allowed, these neighbors would cut down Thorion and carry him to the courtyard, laying him out with his feet pointing toward the door to prevent the dead man’s psyche from straying. Then the women would come downstairs to wash the body and dress it for eternity, with no more than three changes of clothes, as the law demands. They would place an obol in his mouth, the coin as payment for the ferryman of the dead, Charon, to carry Thorion across the Acheron, the river of woe.

The pressure would be building on the guards to let through the crowd and allow the rituals to begin. I might have only moments left to learn what I could.