Read The Last Summer of the Camperdowns Online

The Last Summer of the Camperdowns 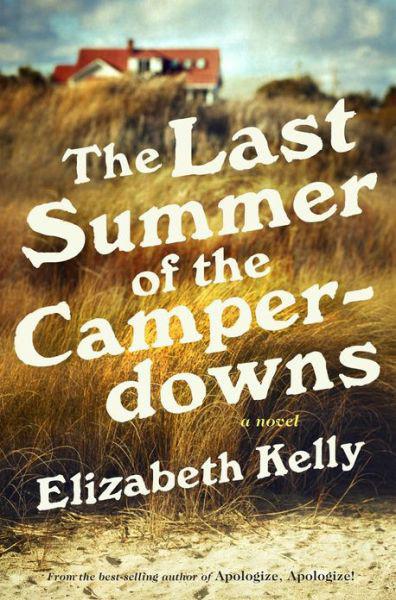 “I do not wish to live like a baptized person.

I wish to live like a dog of the wood.”

I
RAN INTO HARRY LAST NIGHT
.

It was inevitable. I knew it would happen someday—in the same way that I have this nagging hunch I’m going to die. Eventually. For me, eventually arrived yesterday in Nonquitt, Massachusetts, at a Democratic fundraiser held at the hundred-acre estate of a New England philanthropist by the name of Edgar Rutherford.

Still, it was a shock.

He’d been living abroad. Hong Kong. Rome. Dublin. Lhasa. I’ve kept track. Just back from a trip to the Darien Gap jungle, he made a documentary film about his trek across the remote Atrapo Swamp, a place so inhospitable you’d need a chain saw to tame the spiny undergrowth, and rabid dogs proliferate like perverse tour guides. I heard that he got married to some shiny object he picked up along the way. Her father was the French ambassador to the United States. Harry always did have a taste for thoroughbreds.

You know the type. Refined neck and long legs, glistening mane, traceable lineage and exotic temperament. The only thing missing was an appetite for hay. Someone who knew her told me that Élodie Héroux suffered from the classic racehorse afflictions of low fertility and small heart. An unkind remark—it reminded me of something my mother would say—even if it did taste good going down, though not for long.

I’ve never married. It’s all right. I’m young and anyway, I have my dogs. I have my horses. I’ve done okay, even enjoyed some success as a competitive rider. To think that Harry used to kid me about making a good match, as if marrying well in my case was preordained, an unavoidable rite of passage.

Harry was always teasing me about something.

B
EFORE I SAW HIM,
I heard him. That voice! My only experience of synesthesia. He sounded the way a graham cracker tastes. We were at opposite ends of the massive living room, an old and fading beauty, a bit desperate, one of those cosmetically enhanced spaces that make a vocation of overdecoration to the point of malpractice.

He came around the corner, pausing for a moment to take in the view. If Harry was surveying the forest, then I was focused on the tree. Warm and robust, he crackled like a campfire, flickering with all the colors of autumn—russet hair with gold and amber highlights, fair skin rosy and burnt by the sun and the wind. Slim but strong and athletic, sporty as a lacrosse stick. But for the subversive kindle of intelligence and humor in those balmy blue eyes, he might have escaped from a Ralph Lauren print ad.

My heart did a quickstep. I felt sick to my stomach. An enormous mixed bouquet of gardenias and white Madonna lilies sat on the table next to where he stood, their musky fragrance and his unblemished confidence filling up the room. Gripping the armchair beside me, I took a deep breath, inhaling that wonderful combination, certainty and the scent of flowers, and I was instantly transported back to the moment I met him.

It was 1972. I was thirteen years old. My father, Godfrey Camperdown, was running for the House of Representatives. He was an unlikely candidate, a labor historian and activist, a celebrated biographer and an aspiring musical composer whose stage productions had appeared off Broadway. (“So far off,” as my mother delighted in reminding everyone, “you could smell the lilacs from the Brooklyn Botanical Gardens.”) We were attending yet another fundraiser, the ballroom stacked with a handpicked crowd that alternated between two extremes, the charmless rich and the rancorously blue-collar.

I was standing next to Mirabel Whiffet, notorious busybody dowager and scandal archivist, when he walked in the door, his arrival causing a shimmer of excitement from the packed crowd.

“Ooooh!” Mirabel made a whooshing, satiny sound at first sight of him. She tweaked me with her elbow.

“That boy could attract bees,” she trilled. My mother, the actress Greer Foley, star of stage and screen, initially feigned indifference—the only grand entrance that interested her was her own—but then even she came around, nodding in grudging concession to his appeal.

I watched him furtively and from a chaste distance, flattening my bangs over my eyes in a pathetic attempt to veil my curiosity. Sipping his drink and chatting, he surveyed the room, nineteen years old, genial and easy; he stopped talking to listen to my father, my father’s voice ringing out like Sunday morning. How Camp loved any opportunity to sing! Egged on by staffers and friends, he launched into his signature number—“The Daring Young Man on the Flying Trapeze”—the eccentric linchpin of an unchanging repertoire he’d performed in camphorated living rooms from Los Angeles to Boston to New York City, his unvarnished tenor soaring.

Plainly mortified, pretending more enthusiasm for my father’s performance than I felt—with parents such as mine, embarrassment and humiliation clung to me like remoras—I looked up, nervous and gawky, taking in the genteel scenery of Harry. To my amazement, he joined in with the crowd as they sang along, my gaze shifting back and forth like a swing, looping between my father and Harry, from one to the other.

A tall man in a dark blue suit caught my eye as he made his way through the crowd. He attracted Harry’s attention, too, which was evident in the way his expression changed, the corners of his mouth lifting. I watched the man approach my father; the two began to speak and then all hell broke loose. I can see it and hear it and smell it—the disarray. My father red-faced and brawling, the man in the blue suit reeling backward, my mother running across the ballroom in her skyscraping heels, women screaming, men shouting, flashbulbs popping, tables overturning and glasses shattering, hitting the wooden floor, one after another, exploding like machine-gun fire. Boom. Boom. Boom.

N
OW SEEING HARRY AGAIN,
I ached with loss; it blew through me like a cold wind across an empty field. He stood among a large appreciative group, the women in black cocktail dresses and rosy-white pearls, the men in soft bespoke suits and summer-white shirts, sophisticated human scaffolding erected around the charismatic centerpiece of Harry Devlin.

It was June and the garden doors were open, white flowers lightly infusing the house with the lacy odor of late spring. He was laughing, and his laughter traveled from one end of the room to the other, carried along on the jaunty breeze.

I struggled to breathe. “Are you all right?” the woman next to me asked. Nodding, smiling, I pretended interest in the origins of the oil painting on the wall. A beach scene. Waves crashing. Tall grasses waving. Seagulls tucked together on the sandy dunes.

A smartly dressed couple across the room pretended not to look at me. Others stared openly, pointing and rude, as if the usual rules governing intrusiveness didn’t apply in my case. My face burned the way it does after a day on the beach. I was calm on the outside, but the winds inside me were picking up. Reaching for the nearest chair to steady myself against their swirling effects, my past roared into present view.

I grew up alongside the Atlantic Ocean, alert and attentive to the battering of the breakers and the separate wilderness of the wind, the air soaked in brine. Each day I awoke to the feel of my bare feet sinking with a salty gush into the cool morning sand, tide receding, the beachfront littered with the damp dead and the dying. Until that last summer, I imagined that it was the one season with nothing to hide. Now I wake up knowing that the sea conceals more than it ever reveals about the true terrors of summer.

“Oh, my God, isn’t that Harry Devlin?” The same solicitous woman reached for my forearm. I didn’t know her but it seemed that she knew me. “Look, if you’d like to leave . . .”

I put my drink down on the closest table and considered my answer just as the great, carved, mahogany double doors leading from the dining room into the living room blew open and Edgar Rutherford appeared, loud and vulgar, surrounded by a human tsunami, an overflow of people pouring into the room.

“Jesus, Dev! Is that really you? Where the hell have you been all my life? It’s about bloody time you came home!” He was shouting, infecting the room with his studied exuberance—Rutherford held the patent on formulaic outlandishness—and Harry acknowledged him with an extravagant wave, everyone laughing and clapping, ripples of excitement seen and heard and felt, formally attired staff struggling to make their black-and-white way, tripped up at every turn, gleaming silver trays over their heads, as they winnowed, unsmiling and solemn, through the creamy crush of the crowd.

Edgar grabbed a bottle of champagne from a passing tray and lobbed it like a football in Harry’s direction. Harry leapt forward, lunged for it and missed, the bottle exploding on the hardwood, champagne surging like a geyser, spraying him top to bottom with bubbles and fizz. Everyone gasped, the circle of glamorous disciples that surrounded him cleaving neatly down the middle.

Harry hooted noisily as if he’d just been tossed into an unheated pool, wiped the champagne from his eyes and started to laugh. “You son of a bitch,” he said as he headed for the nearest window, and much to everyone’s combined amusement and dismay, used the faded antique curtains to dry his face and hair.

I was afraid he might see me. I was afraid he might not see me. Over the fireplace mantel there was a large and ornate mirror, vaguely oriental. Spotting his reflection, I relaxed into the intimate safety of watching him remotely, light from wall sconces and candelabra a golden blur. Harry, slightly bent at the waist, rubbed his hair on the pale imported silk. Then he glanced up at the mirror.

His reflected gaze met mine. It was the first time I had seen Harry Devlin in two decades. His eyes registered brief surprise, then something more. There was a whole lifetime in that look. He hesitated and then he started to walk across the room, talking to this one and that one, casually making his way through the crowd. I didn’t turn around, but watched him in the mirror, walking in a straight line, heading right for me.

Someone whispered, someone else murmured, someone tittered, someone groaned, the room got quieter and shifted edgily from one foot to the other foot as people began to understand what was happening. They knew our history, after all.

“Shit,” Edgar said, loud enough for everyone to hear.

The crowd dispersed as the orchestra leader tapped on the dais with his baton and the band began to play something pretty. The music filled me up and the few people that remained behind, more curious than courteous, gradually withdrew until I was left alone with the same question that I had asked myself every day and every night for more than twenty years.

The Perfect Lady Worthe by Gordon, Rose
Master by Raven McAllan
Hadrian by Grace Burrowes
The Medium by Noëlle Sickels
Aftershock by Holt, Desiree
The Towers of Samarcand by James Heneage
Darkness Blooms by Christopher Bloodworth
Lucky: The Irish MC by West, Heather
The Ugly Sister by Jane Fallon
Shadow of Reality by Donna Fletcher Crow