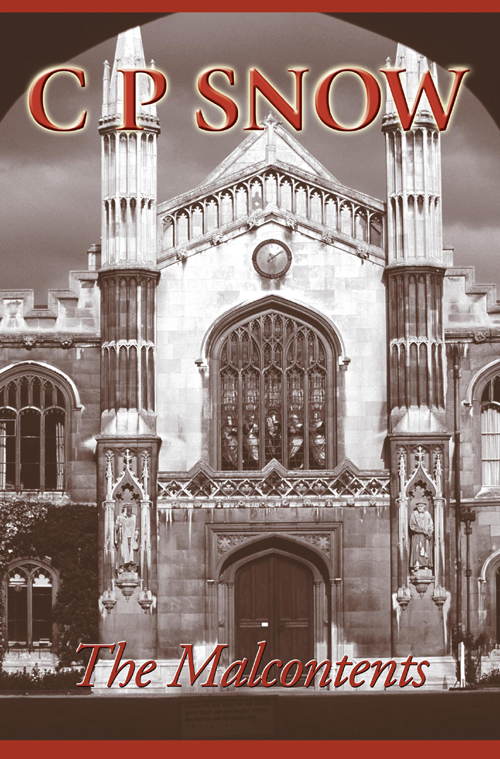 The right of C.P. Snow to be identified as the author of this work has been asserted.

This is a fictional work and all characters are drawn from the author's imagination.

Charles Percy Snow was born in Leicester, on 15 October 1905. He was educated from age eleven at Alderman Newton's School for boys where he excelled in most subjects, enjoying a reputation for an astounding memory and also developed a lifelong love of cricket. In 1923 he became an external student in science of London University, as the local college he attended in Leicester had no science department. At the same time he read widely and gained practical experience by working as a laboratory assistant at Newton’s to gain the necessary practical experience needed.

Having achieved a first class degree, followed by a Master of Science he won a studentship in 1928 which he used to research at the famous Cavendish Laboratory in Cambridge. There, he went on to become a Fellow of Christ's College, Cambridge, in 1930 where he also served as a tutor, but his position became increasingly titular as he branched into other areas of activity. In 1934, he began to publish scientific articles in
Nature
, and then
The Spectator
before becoming editor of the journal
Discovery
in 1937. However, he was also writing fiction during this period, with his first novel
Death Under Sail
published in 1932, and in 1940
'Strangers and Brothers'
was published. This was the first of eleven novels in the series and was later renamed
'George Passant'
when
'Strangers and Brothers'
was used to denote the series itself.

Discovery
became a casualty of the war, closing in 1940. However, by this time Snow was already involved with the Royal Society, who had organised a group to specifically use British scientific talent operating under the auspices of the Ministry of Labour. He served as the Ministry’s technical director from 1940 to 1944. After the war, he became a civil service commissioner responsible for recruiting scientists to work for the government. He also returned to writing, continuing the
Strangers and Brothers
series of novels.
'The Light and the Dark'
was published in 1947, followed by
'Time of Hope'
in 1949, and perhaps the most famous and popular of them all, '
The Masters'
, in 1951. He planned to finish the cycle within five years, but the final novel
'Last Things'
wasn’t published until 1970.

He married the novelist Pamela Hansford Johnson in 1950 and they had one son, Philip, in 1952. Snow was knighted in 1957 and became a life peer in 1964, taking the title Baron Snow of the City Leicester. He also joined Harold Wilson’s first government as Parliamentary Secretary to the new Minister of Technology. When the department ceased to exist in 1966 he became a vociferous back-bencher in the House of Lords.

After finishing the
Strangers and Brothers
series, Snow continued writing both fiction and non-fiction. His last work of fiction was '
A Coat of Vanish',
published in 1978. His non-fiction included a short life of
Trollope
published in 1974 and another, published posthumously in 1981, '
The Physicists
:
a Generation that Changed the World'
. He was also inundated with lecturing requests and offers of honorary doctorates. In 1961, he became Rector of St. Andrews University and for ten years also wrote influential weekly reviews for the
Financial Times.

In these later years, Snow suffered from poor health although he continued to travel and lecture. He also remained active as a writer and critic until hospitalized on 1 July 1980. He died later that day of a perforated ulcer.

'Mr Snow has established himself, on his own chosen ground, in an eminent and conspicuous position among contemporary English novelists' - New Statesman

In the mild January night, a young man was waiting outside his father’s house. A single bell rang, and kept on ringing, from the cathedral tower. The young man, whose name was Stephen Freer, was used to bells, having lived since he was a child in that house close by. Six fifteen on a Saturday evening: the spoken evensong without a choir: not paying attention, concentrated on his own thoughts, he watched a couple of figures, and then another, move towards the radiant porch.

Stephen moved down the lane and stopped at the bollards at the end. The lane, cut off from traffic, Georgian houses on the further side, was as near a precinct as the cathedral could provide: but in fact the cathedral had until recently been only a parish church, promoted when the town itself was promoted, and the lane was a relic, piously preserved by local antiquarians, Stephen’s father among them, of the old eighteenth-century town.

Stephen rested against one of the bollards and gazed up at the sky. It had been a warm and gusty day, but now the wind had dropped. The spire, elegant and high, a piece of Victorian reconstruction, stood out against some early stars. Stephen knew something about the cathedral, and a good deal about the stars: but he paid no attention to either, no more than he had to the sprinkling of old people going in to the evening service. He was not given to thinking of two things at once. He was waiting for a friend and ally. He was in a state, almost pleasurable to him, though he might not have recognized it as such, not so much anxious as keyed tight; a state in which he wanted to decide and act.

The cathedral clock had struck the half-hour. Minutes of absorption. The street outside empty in the evening. No noise from this part of the town. Then quick, familiar steps.

An Englishman would have guessed at once, listening to their tone, that they came from privileged homes.

‘I wanted to catch you,’ said Stephen.

‘Oh hell.’ In the dim light, Mark’s expression wasn’t any more anxious than his companion’s, but eager, enthusiastic, pure. ‘What is it?’

The two young men walked back up the lane together. As they came under the first of the eighteenth-century iron lanterns (gift of Thomas Freer), they made a physiognomic contrast. Both were tall, both looked active and intelligent. They were dressed alike, in polo-neck sweaters and corduroy trousers, and their hair, Mark’s shiningly fair, Stephen’s darker, was thick at the nape of their necks. But Mark, six months younger than his friend, who was nearly twenty-two, had a face without much written on it – with the kind of handsomeness, luminous-eyed, which is also innocent. Stephen had none of that. He was long-headed, with features clear and aquiline, already set and unlikely to alter until he was old. His glance was very sharp. Often, as now, he appeared brooding, except when he broke into a sarcastic smile which, surprisingly, gave his face warmth and made it younger.

It was that smile which Mark expected, didn’t need to look for, when he heard Stephen’s answer about his father. The young men had known each other since they were children: they had been at school together: they talked with most of the explanations left out. How they felt about the ‘leak’ didn’t require saying: the action to be taken, they argued about without fuss. Mark, however, was curious as to when and how Stephen had heard. That afternoon, after tea, said Stephen, actually only an hour or so ago – and from his father.

‘Who it came from I don’t know, one of his lawyer friends, I fancy.’

‘How much have they got?’

‘Anything they’ve got, it would be better if they hadn’t.’

Thomas Freer hadn’t said much, there wasn’t enough to go on. Mark asked how had he taken it, what had his attitude been?

As for immediate action, they couldn’t do it all that Saturday night. They would have to stay at the Freer’s dinner party until ten o’clock, for decency’s sake or rather to seem unaffected: afterwards, they could talk to Neil in the pub.

Mark would go off at once and ring him up: he wouldn’t have time to collect the ‘core’ that night, he had better be told to arrange a full meeting for tomorrow.

‘Don’t explain why over the telephone,’ said Stephen.

Mark smiled. That wasn’t necessary. In spite of all his openness, he had learned discretion, or at least the rules of secrecy. Saying that he would be back in time for dinner, he was leaving Stephen, when he suddenly thought to ask whether they could get everything in order by Monday. He had planned to return to Cambridge then.

‘Your guess is as good as mine,’ said Stephen. ‘It might be rather a long weekend.’

They were at the top end of the lane, where it was crossed by another silent and empty street. Mark gave a wave of the hand as he plunged off, leaning forward in his eager walk.