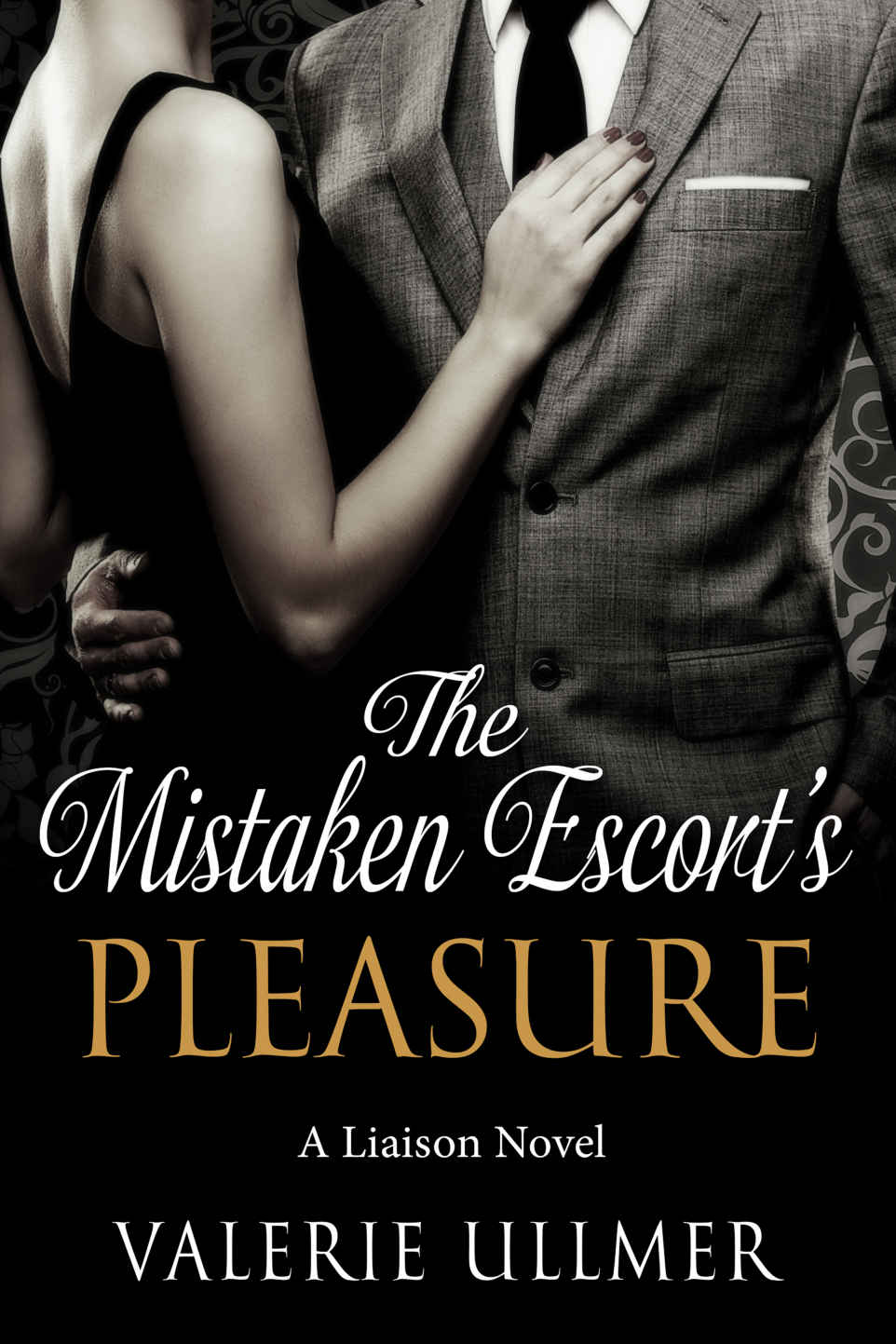 No part of this book may be reproduced, scanned, or distributed in either print or electronic form without written permission from the author.

Quotes used in reviews are the one exception.

This book is a work of fiction and any resemblance to persons, living or dead, places and locales, or events, is purely coincidental.

All characters and events portrayed in this book are completely fictitious and dreamed up by the author.

Copy Edit by Faith Williams from The Atwater Group

“How did I let her talk me into this?”

Ellie Roth mumbled to herself.

As she sat in the office of Liaison, one of the highest rated escort services in New York that her friend Nina had recommended, she felt the butterflies that she managed to tamp down before her appointment flutter back to life.

Her body reacted in a way that brought heat to her cheeks when she surveyed the color scheme in the office and implanted images that were best left in the privacy of her own home.

She loved color in all forms, but the deep reds painted on the wall made her think of shirtless men, their skin glistening with a sheen of sweat, which led to thinking about sex, and she absently wondered whether the heavy oak desk would be sturdy enough for two people.

She shook her head to dispel where her thoughts led her and blew out a breath to shake off her embarrassment.

When that didn’t help calm her nerves, she brought out her sketch book from her messenger bag and opened to a fresh white page.

Her hand instinctively moved over the page as her eyes darted around the room, drawn to several pictures of the same couple scattered around the office.

Her focus moved from one picture to another, trying to get the right angle in her sketch, and before long, her nervous energy fled and she transferred it into her creation.

She felt a twinge of envy as she glanced at all of the pictures, and for the first time in her twenty-five years, she yearned for something more than a career and her art.

She had one single goal when she lived with her parents.

Her parents were in their late forties when they had her, a very big surprise for two selfish people who had no clue how to raise a baby.

She learned early on that she had to depend on herself if she wanted anything in life, so at the age of sixteen, she graduated from high school and enrolled in college for the summer semester.

She made the decision to take the maximum amount of credits she could handle each semester, and within three years, she had a bachelors in graphic design and information technology.

At the age of twenty, she was hired to be one of the artists at Jones, Booth and Company, a large advertising agency in New York, and worked her way up to lead designer in a matter of five years.

She loved her job and the responsibilities that came along with it, but she felt a restlessness that she didn’t want to examine.

Her dating history was abysmal, with one relationship that had failed almost as soon as it began.

She didn’t have enough time to find someone who she could get to know and possibly fall in love with, so here she was at an escort service to find a date.

It was the one respectable escort service she could find, where you could hire men as dates to social functions and not for sexual encounters, which made her feel a little better about making the appointment.

But not by much.

She knew that she would never ask a stranger to sleep with her, no matter how handsome he was, but the thought planted itself in her head and wouldn’t let go.

A once-in-a-lifetime encounter that neither of them would regret.

Nina had told her that some of the escorts slept with clients, but after they’d completed their date with the client, and both parties were discreet about their time together.

She wondered whether she was brave enough to ask her date to sleep with her, but shook her head.

She wouldn’t, would she?

She banished the sinful thoughts from her head and darkened some of the lines on the sketch, humming absently to herself.

She jumped when the door slammed open, and she couldn’t help but glance at who caused the commotion.

She watched as the woman, the one from the pictures surrounding the office, and a man she didn’t recognize, rush into the office.

The woman walked behind the desk, putting distance between her and the angry man.

That voice sent a shiver down her spine, and the heat that simmered from the inappropriate thoughts she had since entering the office burst into flames and licked her body.

His voice alone could send her over the edge.

She dropped her eyes and tried to concentrate on the lines her hand drew absently, but her eyes kept going back to the man’s large form.

She’d been in New York for five years, but she had never seen a man as impressive and handsome as the man who stood a few feet from her.

He was well past six feet tall, imposing with a wide set of shoulders, a muscular chest, and a defined stomach that was emphasized by the white dress shirt he wore.

His dark hair was mussed, as if he ran his hand through it several times, but instead of messy, it looked spectacular on him.

She ran her eyes over his body and back up to his face and squinted to see what color his eyes were.

But he was busy glaring at the woman behind the desk.

“You need to take it easy.

You can’t be working sixty hours a week anymore.

Think of your health,” he growled.

Ellie couldn’t help but examine the woman in front of her, but to her, the woman looked healthy.

To be honest, she looked as though she glowed.

The woman smiled indulgently at the man who let out a low growl at her lack of response.

She stopped when she glanced at Ellie, who’d tried to remain invisible and failed.

The man glanced up when the woman stopped talking, a split second before his head swiveled in her direction as he followed the woman’s gaze.

She stopped breathing as his eyes traveled down her body and back up, as if they were alone in the room.

His eyes zeroed in on her braid, hanging over her left breast.

She’d had purple highlights blended into her natural brown hair, and as he stared at her hair, she wondered whether he was too straitlaced to appreciate the little splash of color.

At that moment, he caught her gaze, and she couldn’t bring herself to look away.

It wasn’t until someone cleared their throat that she blinked, breaking the connection between them.

She turned toward the woman, who was now seated behind her desk.

“Should I go?” Ellie choked out.

The woman opened her mouth to respond, but was interrupted by the man.

The woman turned back to the man, waiting for him to leave.

His eyes found hers for a split second before she dropped her eyes to her lap.

Instead of walking out the door as Ellie expected him to, he walked toward the filing cabinet on the other side of the room and perched on the edge of it, his arms crossed as he faced both women.

“I think I’ll stick around.”

The woman closed her eyes and pinched her nose for a minute before she shot Ellie a questioning look.

Her voice was husky and soft, so she coughed in order to cover her reaction to the man.

She should have been embarrassed by the request she was about to make, but because of his concern for the woman seated across from her, she felt comfortable speaking to both of them about her request.

She also knew that Liaison had a confidentiality agreement, and they would never disclose information about their clients.

The funny thing was, he looked more like a banker on Wall Street—the power suit a dead giveaway—not an escort.

This was her first trip to an escort service, so she had no idea what a typical escort looked like, so she pushed back her judgment and took a deep breath.

She gathered her thoughts, but stayed silent when he shifted from one foot to another.

His eyes never left her face.

She stared at him, giving him a once-over that wasn’t as subtle as his own.

She’d never seen a man as handsome as he was, and wondered whether he was as intense in bed as he was just standing in an office.

At her inappropriate thoughts, she shook her head and turned to meet the amused gaze of the woman.

Thank you for seeing me on such short notice.”

What can I do for you, Ellie?”

“I need a date for a wedding in a couple weeks, but I’ll need to get to know him a little bit before we attend.”

Ellie watched as Rebecca’s brows drew down, and wondered whether her request was ridiculous.

There were no prices listed on the web site, but she couldn’t help but wonder whether her request would be expensive.

“Can I ask why you need to get to know your date beforehand?”

He’s a couple years older than me, but we went to college at the same time, and both of us had plans to move to New York from Colorado after graduation.

We lost touch with each other after our careers took off, and a year ago, we ran into each other and started dating.

Well, funny thing, I caught him cheating with my roommate, and broke it off with him after I caught them.

They have decided to get married and are trying to set me up on a date for their wedding, and I’d rather…not.”

She shook her head at the understatement of the year.

She hoped that it didn’t come out as pathetic as it sounded in her head.

“They mean well, but I would rather pick my own date, and get to know them before the wedding.”

The closest friend she had was Ben, but she grew uncomfortable every time she thought about asking him.

“My friends don’t think I should have accepted the invitation in the first place,” Ellie said.

“Let me see what I have available.”

She started to reach for her mouse on her desk, when the man interrupted her search.

Ellie’s eyes found his, and she raised an eyebrow in question.

The corner of his mouth lifted, as if he found the look on her face amusing, making her heart flutter in her chest.

“You’ve got to be joking?” she asked.

His smile curved into a frown at her question, and she hated herself for wiping the smile off his face.

She did the one thing that she could think of; she burst out in nervous laughter.

She slammed her hand over her mouth, and her eyes widened as he straightened from the file cabinet and strode toward her.

When he closed the distance, she jumped out of her chair and put a hand out to stop his advance, making sure that she didn’t touch any part of him.

He stood about a foot from her, and she could feel the heat and anger radiating from his body, which sobered her.