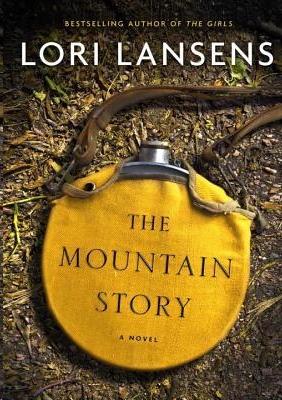 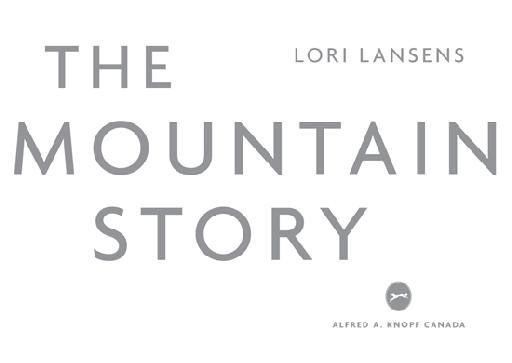 PUBLISHED BY ALFRED A. KNOPF CANADA

All rights reserved under International and Pan-American
Copyright Conventions. No part of this book may be reproduced in any form or by any electronic or mechanical means, including information storage and retrieval systems, without permission in writing from the publisher, except by a reviewer, who may quote brief passages in a review. Published in 2015 by Alfred A. Knopf Canada, a division of Random House of Canada Limited, a Penguin Random House Company. Distributed in Canada by Random House of Canada Limited, Toronto.

for
Max and Tashi
and
Addam, Andrew, Chloe and Nathan

A person has to have lived a little to appreciate a survival story. That’s what I’ve always said, and I promised that when you were old enough, I’d tell you mine. It’s no tale for a child, but you’re not a child anymore. You’re older now than I was when I got lost in the mountain wilderness.

Five days in the freezing cold without food or water or shelter. You know that part, and you know that I was with three strangers, and that not everyone survived. What happened up there changed my life, Danny. Hearing the story is going to change yours.

It’s hard to know when a son’s ready for the truth about his old man. The night of your middle school graduation was the first time I
almost
told you; then it was your fourteenth birthday, and fifteenth, and every birthday after. You had a right to be told, but it’s never been that simple. To understand about the mountain, you need to know what came before.

Remember last spring when we were visiting colleges? We were on that dark gravel road just outside of Bloomington and I nearly hit the deer. Remember we
had to pull off at that truck stop because I couldn’t stop shaking? The deer was safe, and you didn’t understand why I was so rattled by the close call. Later, when I was calm, driving down the highway toward home, you asked me if I’d ever killed anything—accidentally or on purpose. You’d given me the perfect opening in the perfect setting—we always have our best talks in the car.

You were ready. I wasn’t. That night I realized I was never going to be able to tell you the whole story—not face to face. If I had to watch you take it in I’d have edited, censored, lied, anything to avoid seeing your pain. But there’s no point in telling half a story, is there? Or worse, one that’s only half true.

So I wrote it down. I typed it out as it came to my fingers because that felt like the most honest thing to do. It’s longer than I thought it would be—shorter somehow too. As for the timing of all of this? With you starting Indiana State? When you’re older you’ll see that there isn’t so much a good time or bad time for things, appearances to the contrary. There is just
a
time. Anyway, it’ll be good for you to read this while you’re away at school. You’ll need some time to absorb it, and some distance from me.

The day I got lost with the others—that fateful November day—was the one-year anniversary of Byrd’s accident. It was a tough year, and I didn’t think it could get worse. Then Frankie, my father, got drunk on Halloween night and killed a young couple with his car. My best friend was gone, my father sent to prison for vehicular manslaughter. I was on my own—no one
to keep abreast of my plans. Not that I would have told anyone about my trip to the mountain anyway, because on that cool, grey afternoon, which was also the day of my eighteenth birthday, I had decided to hike to a spot called Angel’s Peak to jump to my death.

No one else knows that part of the story. Not even your mother.

My fellow hikers have been with me, in one way or another, since we were lost together all those years ago, walking alongside me when I’m out with the dogs, quiet when I’m reading in bed, guiding me with whispers when I can’t find my way, looking over my shoulder the whole time I was typing out these pages. I’ll miss their haunting.

When you were a little boy you’d study me in quiet moments and ask if I was thinking about the mountain. I almost always was. You asked if I ever dreamed about it. I did. Still do—especially now. Sometimes I wake up in a panic. Sometimes I wake longing for old friends.

Your mother? She’s always said she didn’t need to know all the gory details. Still, we both knew this day would come, and once you’re finished this, she’ll have to read it too. I’m afraid I’ve caged the mountain story for so long it’ll die in the wild. Mom wishes it already had.

Here it is, Danny. As you read this, remember our family motto—there will be sway.

M
Y BOYHOOD HOME
on Old Dewey Road stood among similar clapboard bungalows in the older, grimier section of Mercury, upwind of Michigan’s largest rendering plant, with the train tracks near enough that I could tell passenger from freight by the way the house shook. A year and a half after my mother’s accident—that’s what we called it—my father briefly got sober and painted the entire house, inside and out, a dark, flat blue. Drowning Man Blue. Frankie said it was a tribute to Glory. She loved the colour blue.

Frankie said I was too young, only four years old when she passed away, to have an honest recollection of my mother, but I do. Glory Elizabeth Truly. In my favourite memory she wears a silky white dress with batwing sleeves—one I’ve never seen in photographs. She’s standing in front of a dressing room mirror smiling at our reflection and behind us is another mirror where I discover our infinity. “
Always
,” I say. My beautiful mother laughs and tells me I’m clever before covering my face with soft kisses and spinning me in her embrace. I
glimpse us with each turn. Glory looks like an angel in that white dress.

I remember the mornings with my mother the most, watching her get ready for work (kindergarten teacher) while Frankie (
entrepreneur
) slept upstairs. We talked in whispers as she made up her pretty face and spritzed her curls with lemon-scented hairspray. Before disappearing out the door, she’d turn to smile and then lay her hand on her heart to say she kept me there, even when she was away.

After she died, Frankie had her name tattooed on his forearm—
Glory
—in a rainbow that arched over the word
Always
. I used to think it would have been truer if the tattoo said Glory
Once
or Glory
Briefly
or even better
Sorry
Glory.

I have never, to my recollection, called Frankie by any name other than his first. My ears were filled with the sound of it, usually shouted, often slurred, by the strangers that came and went from that smoke-choked blue house. Men who slammed doors and broke bottles. Women I didn’t know cooking food I wouldn’t eat. Children I’d never seen playing board games I didn’t own. I remember one time Frankie tossed me a package of gum and warned, “Share that with your sisters.” I turned around to find two freckled redheads I’d never seen before sitting behind me on the couch.

Glory
Always
? She was only twenty-five (Frankie a full decade older) when she died. I have my mother’s smile, I’ve been told, but otherwise I’m the image of my dark-haired father. I remember after a second-grade lesson about immigration, I’d asked Frankie the details of my heritage. He told me that Glory’s family came from England when she was a baby and that her parents, both older physicians, had died of natural
causes before my mother graduated from teacher’s college. Frankie guessed they wouldn’t have liked him. It did occur to me that if Glory’s parents had lived longer, I might never have lived at all.

When I asked about his side of the family, Frankie hesitated. He was secretive about his past, like me. “On my father’s side, we were Trulinos until the nineteen-thirties but then my grandfather decided he wanted a more American-sounding name so he changed it to Truly and that caused a rift and that’s how we ended up in Michigan. On my mother’s side we’re French Canadian and Cree. My cousins came down to visit us from Quebec one time. They were dark and lean. Badass. I take after my mother’s side. That’s how come I’m so stealthy. Why I like my feet bare.”

There was this rotting cedar porch out front of our blue house from which I’d leap as a boy, towel-cape aflutter behind me, shouting, “I am Batman,” or “I am Superman,” but I remember one day I lost my cape, and I simply shouted, “I am … ME!” Frankie slammed his palm on the kitchen table and hollered through the open window, “That kinda arrogance’ll take you to Cleveland, Wolf! Cleveland and
back
!” Whether he meant to encourage, mock or scold me, I still have no clue. My father has left me, my whole life, in a state of wonder.

One spring day when I was thirteen, Frankie stood up from the kitchen table and announced, “We need to be near family now,” like the tragedy of my mother’s death was ten
days
, and not ten
years
, old.

“We’re moving to California. This summer.”

“We’ll stay with Kriket till we get on our feet.”

I’d never been to California and neither had Frankie. I’d never met his sister Kriket (
Katherine
) and never knew them to be close.