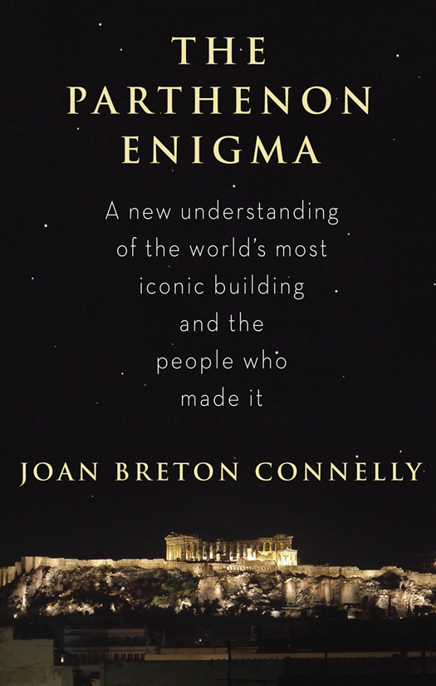 All rights reserved. Published in the United States by Alfred A. Knopf, a division of Random House LLC, New York, and in Canada by Random House of Canada Limited, Toronto, Penguin Random House Companies.

Knopf, Borzoi Books, and the colophon are registered trademarks of Random House LLC.

For Louise, Thomas, and Peter

1   THE SACRED ROCK
Myth and the Power of Place

2   BEFORE THE PARTHENON
Gods, Monsters, and the Cosmos

3   PERIKLEAN POMP
The Parthenon Moment and Its Passing

5   THE PARTHENON FRIEZE
The Key to the Temple

6   WHY THE PARTHENON
War, Death, and Remembrance in the Shaping of Sacred Space

NEVER BEFORE
in human history has there been a structure that is at once so visible to the world, so celebrated, so examined, so invested with authority, and yet, at the same time, so strangely impenetrable at its core. After centuries of study and admiration, the Parthenon remains, in so many ways, an enigma.

The past three decades have brought perhaps the most intensive period of scrutiny the Parthenon has seen since its construction nearly twenty-five hundred years ago (447–432
B.C.
). The monumental work of the
Acropolis Restoration Service in the conservation and analysis of the building has revealed a wealth of new information about how the Parthenon was planned, engineered, and constructed. Surprises, like newly revealed traces of bright paint on architectural moldings set high within the west porch, hint at the original, radiant decoration of the temple. At the same time, freshly emerging evidence from Greek literature, inscriptions, art, and archaeology has broadened our understanding of the world in which the Parthenon was built. The myths, belief systems, ritual and social practices, cognitive structures, even the emotions of the ancient Athenians, are now under rigorous review. But much of what has been discovered in recent years does not fit into the sense we have had of the Parthenon for the past two and a half centuries. Why?

Our contemporary understanding of the Parthenon and the symbolism that has been constructed for it from the Enlightenment on has everything to do with the self-image of those who have described and interpreted it. There is a natural tendency to see likeness to oneself when
approaching a culture as foreign as that of Greek antiquity. How much more so this is when looking at a monument that has become the icon of Western art, the very symbol of democracy itself. With these labels comes a projection onto the Parthenon of all our standards of what it means to be civilized. In looking at the building, Western culture inevitably sees itself; indeed, it sees only what flatters its own self-image or explains it through connection to the birthplace of democracy.

This association has been reinforced again and again by the adoption of Parthenonian style for
civic architecture beginning with the
neoclassical movement and culminating in the Greek Revival. From the early nineteenth century on, financial and governmental institutions, libraries, museums, and universities have reproduced classical architectural forms to communicate a set of values, implicitly aligning themselves with the flowering of democratic Athens. One need only look at the
Second Bank of the United States in Philadelphia (1811–1824), the
British Museum (1823–1852), the U.S. Custom House on Wall Street (1842) (
this page
),
Founder’s Hall at Girard College in Philadelphia (1847), the
U.S. Treasury Building in Washington, D.C. (1836–1869), the
Ohio State Capitol (1857), the
Philadelphia Museum of Art (1928), or the
U.S. Supreme Court Building (1935) to recognize quotations from the iconic form of the Parthenon.
1
Ironically, these unequivocally secular civic structures have appropriated what is, fundamentally, a religious architectural form. Preoccupied with the political and the aesthetic, we have become all too comfortable with the constructed identity of
Parthenon as icon, neglecting its primary role as a deeply sacred space.

Any views that depart from the well-established contemporary understanding of the Parthenon, and its association with civic life as we know it, have been effaced, like the traces of paint and intricate detail that once adorned the surface of the temple itself. Criticism of the conventional creed is taken as an attack on an entire belief system. The long-standing association of the Parthenon with Western political ideology has, indeed, caused new interpretations to meet with enormous resistance. But there is much more to the Parthenon and the people who created it than flatters and corresponds to our sense of ourselves. To recover it, we must begin by trying to see the monument through ancient eyes.

Viewing the Parthenon as synonymous with the Western democratic system of government began in the eighteenth century, when the art
historian
Johann Winckelmann first linked the emergence of individual liberty to the development of high classical style. In his influential book,
Geschichte der Kunst des Alterthums
(
History of the Art of Antiquity
, 1764), Winckelmann argued that the rise and decline of artistic styles followed developments in the political sphere. The peak of Greek art, he maintained, coincided with the democratic form of government.
2
Nine years later his student
Johann Hermann von Riedesel took this model a step further, proclaiming the Parthenon to be “the supreme product of Athenian democracy.”
3

This sentiment was robustly embraced during the
Greek War of Independence (1821 to 1830) and the period that immediately followed it. As the modern Greek nation was forged, the European powers that helped to shape it constructed narratives through which they could trace their own political systems back to the epicenter of the Athenian Acropolis. On August 28, 1834, the newly designated king of Greece, Otto, son of King Ludwig of Bavaria, officially inaugurated the Parthenon as an ancient monument. In a carefully orchestrated pageant conceived in the very image of Periklean Athens, King Otto rode on horseback with his regents, court, and bodyguards while soldiers from the National Guard led a procession of citizen elders, teachers, guild officers, and other notables.
4
Sixty Athenians marched with olive branches in hand, while on the
Acropolis, Athenian maidens, dressed in white and carrying bows of myrtle, unfurled a banner displaying the image of
Athena.
5
Upon reaching the citadel, King Otto was presented with keys to its gate and escorted into the Parthenon by the neoclassical architect
Leo von Klenze. There, the king was enthroned upon a chair covered in laurel, olive, and myrtle. Klenze delivered a rousing patriotic address, advocating the
restoration of the Parthenon and the obliteration of every trace of Ottoman Turkish building on the Acropolis. “All the remains of barbarity will be removed,” Klenze proclaimed. He then bade King Otto to sanctify the first marble drum to be restored to the “reborn Parthenon.” The king obliged, tapping three times on the white marble column segment set before him.
6
Klenze’s vision of a barbarian-free Acropolis was fully realized in his “ideal view” of the Acropolis (following page), painted in 1846 and acquired by King Otto’s father, Ludwig I, some six years later.
7

In the century that followed, the growth of archaeology and an ever-increasing recognition of classical Greece as the cradle of Western civilization
elevated classical cultural production to a whole new level.
8
In 1826 work began on a replica of the Parthenon atop Calton Hill just east of Edinburgh. Designed as the
National Monument of Scotland to memorialize Scottish soldiers and sailors lost in the
Napoleonic Wars, it would become, people hoped, the final resting place for a host of Scottish notables. The structure was never completed, and the single façade that stands today is marked with an inscription that reads, “A Memorial of the Past and Incentive to the Future Heroes of the Men of Scotland.”
9
Meanwhile, just above Regensburg in Bavaria, King Ludwig I built his own Parthenon (1830–1842), designed by the same
Leo von Klenze of the ceremony on the Acropolis. Named Walhalla, “the Hall of the Dead” (facing page), the Bavarian Parthenon was furnished with portrait busts and inscribed plaques commemorating more than a hundred famous individuals across eighteen hundred years of German history. By 1897 the United States could boast of its own Parthenon, built in Nashville, Tennessee, for the state’s Centennial Exposition of 1896–1897. The wooden structure was rebuilt in concrete in 1920–1931 and remains a prized landmark of the city to this day (
this page
).
10

By the twentieth century,
Ernst Gombrich would hail the
“Great Awakening” in Greek art as a product of the dawn of democracy. He viewed the “summit of its development” in the high classical period as a direct reflection of the “new freedom” experienced by artists working within the new political system.
11
This positivist construct was perpetuated in a blockbuster exhibition of Greek art that traveled across the United States in 1992, celebrating the twenty-five hundredth anniversary of the birth of democracy. The show, titled
The Greek Miracle: Classical Sculpture from the Dawn of Democracy
, treated viewers in Washington, D.C., and New York City to the very finest of surviving Greek art.
12

Leo von Klenze,
Ideal View of the Acropolis and the Areopagus in Athens
, 1846. (illustration credit
ill.1
) 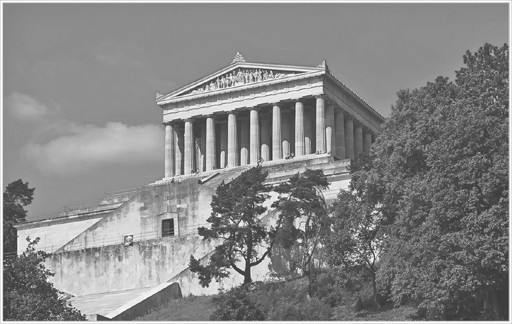 A Lesson in Love and Murder by Rachel McMillan
Homesick by Roshi Fernando
A Duke but No Gentleman by Alexandra Hawkins
¡Acabad ya con esta crisis! by Paul Krugman
Black Silk by Judith Ivory
The River at the Centre of the World by Simon Winchester
Becoming Sir by Ella Dominguez
Life: An Exploded Diagram by Mal Peet
A Beauty Dark & Deadly (A Dark & Deadly Series Book 1) by Heather C. Myers
Dolmarehn - Book Two of the Otherworld Trilogy by Jenna Elizabeth Johnson