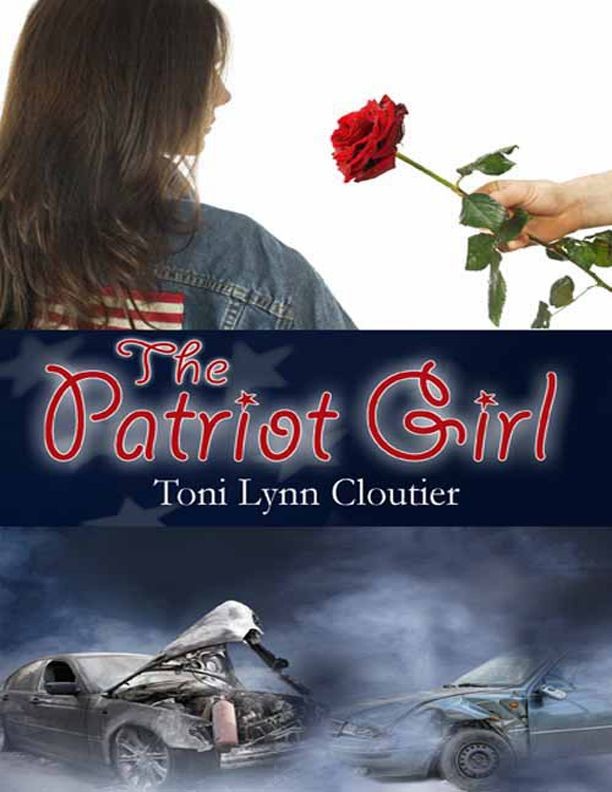 Thank you for purchasing this Wild Rose Press publication.

The No Bulls Series, Book One

The Patriot Girl: The No Bulls Series, Book One

All rights reserved. No part of this book may be used or reproduced in any manner whatsoever without written permission of the author or The Wild Rose Press except in the case of brief quotations embodied in critical articles or reviews.

“Emotional and sexy! What more could you want?”

To my husband, Bill,

of love, laughter, and support.

Also, to our teenage son,

who completes our family.

I owe this milestone to both of them.

A special Thank You to Jane Viera.

Her encouragement and hours of endless reading

more than words could ever express.

To my mother, sisters, family, and friends

for always believing in me.

To my beta readers, critique partners,

and the workers at Riverside and Weaver Libraries

for their support and help over the years.

The library will finally be able to add

one of my books to the shelf!

for allowing me to pick their brains for research.

Any errors are mine.

To my wonderful editor, Maggie Johnson,

for making this an enjoyable experience.

I thank God for all my blessings and for all of you.

What a beautiful summer day for making life changes. At thirty-eight, MaKayla Adams finally figured out what she wanted to be when she grew up.

Dating after the death of her husband three years ago had never been an option. Taking on the role of both mother and father to their son, along with her assistant bank manager’s position, had occupied all her time.

Now with Alex leaving for college next weekend, what would she do in a house with no one to care for? She’d never been alone in her life.

As she drove home from a much-needed vacation, her excitement grew. Since her marriage had been cut short, and motherhood lasted only until children grew up, she could now go after what family had put on hold. College had prepared her to become a public relations specialist. Why not pick up where she left off?

She couldn’t head home without first stopping at the bank where she worked with her best friend. She put her car in park and strolled across the concrete lot. Jodi would want to give her opinion on MaKayla’s new business idea.

She opened the first set of doors into Columbus Bank. Before she could open the second door, a masked man holding a semi-automatic rifle dropped a hand onto her shoulder and squeezed. She froze. Her stomach churned and a blood surge caused by fear made her feel faint.

“Come on, bitch, move it.” The gunman’s husky voice bounced off the glass windows.

She opened the second set of doors. His grip on her shoulder released as he tossed her into a man’s arms. Her head hit the rim of his white cowboy hat and her face banged against his solid shoulder, covered in a black t-shirt.

MaKayla glanced up and met his dark gaze. “Sorry.”

He nodded, easing her behind him.

She had been trained for this moment. But all the training in the world couldn’t prepare one for the reality of the situation. Her heart had never beaten this fast in any training session. Her best friend, the manager, had never been out of sight. And there had never been an elderly woman fearing for her life shaking on the floor beside her in those practice runs.

Deep breaths, MaKayla. Stay calm and the customers will follow.

Sidestepping to comfort the trembling woman proved impossible as the cowboy stopped her—saving her from being plowed down by two more masked gunmen racing past them.

“Doors!” the husky voice ordered one accomplice. He told the second cohort, “Watch these folks.” He then ran across the carpet and tossed a green duffel bag onto the counter.

MaKayla’s best friend appeared in front of him. Jodi could handle herself better than any other employee in this situation.

The Dalton Tennessee Times
would finally have some interesting news to report. MaKayla had to make sure the story wouldn’t include casualties or injuries.

MaKayla jumped when the skinny gunman yelled. She nodded to two women standing in line between the metal poles. She forced a smile, hoping to ease their discomfort, as well as her own. They cooperated.

She concealed a pregnant co-worker behind her. If Sara dropped to the floor, she might never get back up. With MaKayla’s legs locked in position, her knees wouldn’t bend if she commanded them.

“He’s coming this way,” MaKayla informed the cowboy as if he didn’t notice the gun waving in their direction. He, too, had ignored the gunman’s orders and continued to stand.

“It’ll be fine.” The cowboy’s voice drifted over his shoulder.

Seconds later, the gunman stood beside her. Pinpointing him in a lineup would be easy with his ripped jeans, a half-tucked black shirt, and red sneakers. He also smelled worse than a garbage truck.

The cold barrel of the revolver touched MaKayla’s left temple. Her breath hitched and held. Her fingers gripped the belt loops on the cowboy’s jeans. She couldn’t get any closer without ending up in the man’s back pocket.

She closed her eyes and silently prayed Alex wouldn’t have to bury another parent. Her son still wasn’t over losing Paul.

“Remove the gun from the lady.”

At the sound of the cowboy’s voice, MaKayla opened her eyes. She bit her bottom lip as the silver barrel lifted off her temple only to land on the cowboy’s cheek.

Did he look as calm as he spoke? There was no need to play hero with a gun present. She had learned the hard way that the end result of a robbery could be fatal. She didn’t need this man being shot trying to protect her.

The gunman used his free hand to flick the white Stetson off the cowboy’s head. “Do you have a death wish, man?”

Boy.
MaKayla stared into the gunman’s blue eyes peering through the two small holes of the mask.

“You trying to get a good look for the cops, lady?”

MaKayla shook her head. Her focus turned to the women beside her. The robber’s stale breath made the greasy hash browns and orange juice she had for breakfast bubble in her stomach.

The gunman turned and glared at the cowboy. “You ain’t shit—givin’ me orders.” Using the handle of the gun, he hit the cowboy on the forehead, over his left eye.

The cowboy’s head jerked to the side. He lifted one hand toward his injury and curled the other into a fist.

MaKayla reached up and squeezed his right bicep. She kept her tone as composed as she wanted him to keep his anger. “Don’t.”

“Let’s go!” The leader of the pack hollered as he slid the duffle bag off the counter. He knocked a man down as he ran toward the door.

No one moved as the three gunmen hustled out of the building. When the coast cleared, MaKayla took a full breath for the first time since entering the bank. If her body calmed too much, she would crumble like a house made of cards. As an employee, she had to be professional.

She turned around. Seeing Sara’s large belly reminded her of the daughters she had lost during that other robbery. Tears burned in the back of her eyes. She forced a smile—glad Sara wouldn’t have to experience the same nightmare.

She cupped the young girl’s cheeks. “Are you okay?”

“Yes.” Tears streamed down Sara Conley’s face as her arms hugged her stomach, protecting her unborn. “You?” She looked at MaKayla, and then up at the cowboy who stood beside them. “Mister, you’re bleeding.”

The cowboy raised his hand to his head and then lowered a bloody palm.

MaKayla removed a bandanna from her purse and pressed the cotton against the nasty cut. “That creep.”

“I’ll be fine.” The cowboy touched her arm.

Sara returned to her workstation, leaving MaKayla alone with the customer.

The handsome stranger’s concern continued even after issuing commands to a gunman and putting his own life in danger.

“Um. Yes.” Despite her shaking hand, she managed to keep the fabric against his forehead. She forced a smile. Keeping customers calm had to be priority. If she lost her composure, so would they. “You might need a few stitches. An ambulance should be here soon.”

Jodi stepped out from behind the counter and headed toward them. MaKayla reached out her free arm. “Are you okay, Jodi?”

“Oh, darling, I’m fine. What are you doing here? You’re supposed to be on vacation.” Jodi Richards looked up at the cowboy. “What happened here? Are you okay, sir?”

MaKayla waited for her friend to rise on her tiptoes before she uncovered the wound. “One of those idiots hit him over the head with his gun.”

Her hand fumbled because of the man’s large, chocolate gaze locking on to hers as she tried to replace the bandanna. No man had ever turned her emotions topsy-turvy like this. It had to be the aftermath of having her life threatened.

“MaKayla, have him sit down until help arrives.” Jodi turned to leave. “I’ll attend to the others.”

The square-jawed cowboy pointed to his wound and she understood he was indicating that he no longer needed her to mother him. A habit she would soon miss. “Sorry.”

His hand replaced hers on the fabric. “I’ll buy you another one of these things.”

“There’s no need to buy anything.” Her son wouldn’t mind giving up one of his bandannas to a man who had protected his mother from a gunman. “It’s the least I can do. Thank you.”

He nodded. “No big deal. These kids don’t realize how dangerous guns can be until someone gets shot or killed.”

If he only knew how much of a
big deal
having that gun removed from her temple had actually been. Thanking him had been an understatement.

MaKayla escorted him to a blue bench parked between two office entrances. The paramedics made their way through the front doors. “Help is here. You’ll be in good hands. Thanks again…for everything.”

He stood. “Ma’am, if you’re ever in the area, stop by No Bulls, down the road. I’d like to buy you a drink for your help.” He pointed to his wound. “The name’s Dustin.”

She took the hand he offered. “MaKayla.” Stepping foot inside the recently-opened country nightclub in question had never crossed her mind. Country music and line-dancing was never her thing. But this Dustin fellow didn’t need to know that. “Maybe I’ll see you there.”

Dustin James pinched the bridge of his nose, shut his eye, and leaned his head back in the passenger seat of his twin sister’s car.