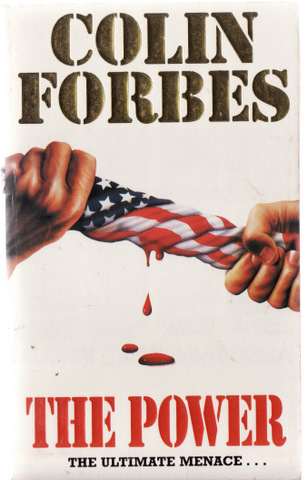 Part One:
The Massacre

Carmel, California, February.
The man, windbreaker open at the top, exposing his thick neck, forced the
screaming girl inside the one-storey log cabin. One large
hand gripped her long blonde hair, the other shoved at the
small of her back.

Joel Dyson, one-time society journalist, now a success
ful member of the notorious international paparazzi,
crouched in the undergrowth at the edge of the clearing in
the wood. His film camera was aimed at the struggling man
and woman as they disappeared through the open door.
He had their faces perfectly recorded on film.

The cabin door slammed shut from the inside. The crude
edifice was perched in the centre of the clearing, shut off
from the outside world by the dense screen of encircling trees. The shutters were closed across the windows but
Dyson could still hear the girl's screams of terror.

He glanced down at the ground where his tape recorder
was in motion, the revolving tape registering the horrific screaming which suddenly stopped. Had the man struck her in the face to shut her up? There was a loaded pause
which Dyson found more disturbing than what he had seen
and heard earlier. The stillness of the wintry forest had a
menacing atmosphere. Something warned Dyson the
silence was ominous.

He had his film camera ready for another close-up when the cabin door opened. He expected two people to emerge, but only the man appeared. He came out, closed the door, rammed a key into the lock, turned it, tossed the
key on to the roof. Why had he done that?

The answer surfaced a moment later as smoke drifted
out from behind one of the shutters, then the window burst
into flames. God! He was leaving her there to burn to
ashes. Dyson caught the expression on the man's face, a
look of vicious satisfaction, his skin streaming with sweat
despite the cold of the early morning. Instinct made Dyson
switch off the recorder, haul the tape free, ram it into the pocket of his duffle coat. The man was staring towards
Dyson's hiding place. Grabbing a gun from inside his belt, he walked slowly towards where Dyson was crouching.

Had he detected some movement? Dyson had the man's
face in his film lens again and the expression was grim,
determined. A full-length shot now, showing the gun.
Dyson saw the cabin suddenly flare into a raging inferno.
Roof ablaze, about to collapse on the girl inside who must
be unconscious, maybe dead? The quiet crackle of the flames erupted into a roar.

The man paused, glanced back. Dyson's camera had recorded his initial advance, the pause, the cabin flaring
into a funeral pyre. The man turned towards the under
growth, began that familiar slow deliberate tread. Time to
get the hell out of it. Alive if possible. Dyson was
thoroughly scared.

Still crouching, he backed away from the undergrowth
screen. Camera looped over his shoulder, the
tape nestling safely in his pocket. He reached a copse of trees, stood up,
resisted the temptation to run. The ground was littered
with dry leaves. For the moment his flight was covered by
the powerful roar of the dying cabin. He had to get as far
away as possible before his flight made too much noise.
It
was a long way to his Chevy parked inside the woods out of
sight of the nearby road.

He paused, heard the deliberate tramp of heavy feet on
the leaves behind him coming closer. And there would be others the man could call on - if he dared risk that. On the

edge of panic Dyson reached the foot of a tall pine tree.
No
one ever thinks of looking up.

Dyson said the words to himself as he shinned agilely
from branch to branch. Higher and higher. He had to reach
the cover of the foliage. Clawing at branches he heaved
himself inside the prickly cover, straddled a stout branch
with both legs, waited, terrified.

Through a small hole in the dense screen he could see
down to the base of the giant pine. The man appeared,
wiped sweat off his left hand on his denims, his right hand
gripping the .38 Police Special. Dyson froze when the man
paused at the base of the pine, head cocked to one side,
listening. In the next minute Joel Dyson knew he could be
dead, his body toppling down through the network of branches until it landed at the killer's feet. With the film
camera looped over his arm, the tape in his pocket. It
would be all over.

The cold was penetrating Dyson's duffle coat, his hands
were frozen. The man below seemed impervious to the
temperature made worse by trails of a mist off the Pacific
Ocean which were now drifting amid the trees. Dyson
forced himself to remain motionless. He'd begun to
wonder whether his actions had been worth it - even for so
great a potential prize, a vast fortune.

For a few seconds his thoughts filled his mind paralysed
with fear. He looked down, blinked. The man had gone.
He heard the heavy footsteps withdrawing, crunching
dried leaves, retreating towards the cabin which must now be a pile of smoking embers.

Dyson checked his watch. 8 a.m. He compelled himself
to stay motionless in his hiding place for half an hour. The
man could have set a trap, moving away a short distance and then waiting. But in the deathly silence of the mist-
bound forest Dyson had heard the sinister footsteps fading
away and no sound of anyone returning.

'Move now,' he told himself, 'before he seals off the
whole area...'

Despite the veils of grey mist Dyson had no trouble making his way back to the parked Chevy. He walked
rapidly, treading on soft moss wherever he could. At
intervals he paused, listening for any signs of pursuit. Nothing. He hurried towards the parked car.

As he threaded his way between the tree-trunks Dyson came alive again, thinking furiously. The nearest airport was San Francisco International. But they'd be watching
and waiting there, he felt sure. Far safer to drive the much
longer route south through California to Los Angeles
Airport. The all-powerful forces the man controlled
wouldn't expect him to take that route.

From LA he could catch a flight to London. There he
could transfer to another flight direct to Zurich in Switzer
land. Julius Amberg, president of the Zurcher Kredit
Bank, owed him. Dyson's mind went back several years.

Bob Newman, the famous international foreign correspondent, had done him a bigger favour than he'd realized
at the time. Dyson had taken some embarrassing photos of
Amberg with his mistress in Geneva. He'd been going to
sell them to
Der Spiegel.
Amberg was hitting the headlines
at that time, acting as go-between in a big financial takeover.

'Give those pics to Amberg,' Newman had urged. 'He is
a powerful man and you might need his help one day. Forget the money just for once, Joel - important allies are
worth their weight in gold ...'

Reluctantly, Dyson had agreed. Now Amberg could
repay the 'debt' by holding the film and the tape in his
vault. What safer place in the world to hide a fortune?

As he came closer to his Chevy Dyson checked in his mind any loopholes in his plan. He voiced his thoughts
aloud in a bare whisper.

'The Chevy was hired in Salinas. They'll take time
tracing the car, the description and
registration number.
I'll dump it in LA. By the time they track it I'll be long
gone...'

He approached the concealed vehicle cautiously.
They
might just have found it. God knew there were
enough of
them - and professionals to their fingertips ...

An hour later he was driving south along the coastal
highway, crossing the bridge at Big Sur. Hardly any traffic.
To his right the wind off the ocean blew against the side of
the car. Huge waves created a curtain of white surf rising thirty feet high. Dyson had reached Santa Barbara when
the shock hit him.

The tape recorder!
In his haste to escape the man he had
left the machine on the ground. It wouldn't take
them
long
to visit his insurance company - to check the serial number
of the machine with his insurance policy. Jesus! They'd
then have a positive identification of who had crouched in
the undergrowth near the cabin. Up to that moment Dyson
had half-cherished the illusion it would take them time to
finger him.

It was a very worried Joel Dyson who reached Los
Angeles, crawled with the traffic, handed in his Chevy and
took a cab to the airport. Here he walked into another
piece of bad luck.

He entered the vast concourse, carrying the bag con
taining a set of clothes he'd been careful to purchase at
several shops after handing back the Chevy. He bought a
United Airlines return ticket to London
-
the return was to
throw off his track anyone who traced the reservation.

The flight left in three-quarters of an hour. Dyson was
congratulating himself on his speedy departure as he
checked in his bag. That was when he heard the crafty
voice as he left the counter.

'Found a chick in London who's dropping her panties for
the wrong man?'

Dyson swung round and stared at a small man with a face
closely resembling a monkey's. Which was why he was
known as the Monkey. Nick Rossi was a small-time opera
tor who watched the airports in the hope of picking up
useful information he could peddle to the press for a small
sum.

'I'm taking a well-earned holiday,' he snapped. 'And if
I'm lucky I'll find an available chick. Sorry, Nick, no sale.'

'Which is why you're taking your camera with you?'

The Monkey grinned knowingly. A dead half-smoked
cigarette was glued to the right-hand corner of his thin lips.

'You should know opportunities hit you in the kisser
when you least expect it. Keep out of the rain...'

Dyson hurried away, swearing foully under his breath. He had thought of offering the Monkey a fistful of bills to
keep him quiet - but that would have whetted his greedy
appetite. Dyson only relaxed when the jumbo jet had
taken off, swung out over Catalina Island and the Pacific
Ocean, then turned east back over the mainland on its
non-stop eleven-hour polar route flight to London. A
double whiskey provided by the stewardess also helped.