Read The Price of Candy Online

The Price of Candy 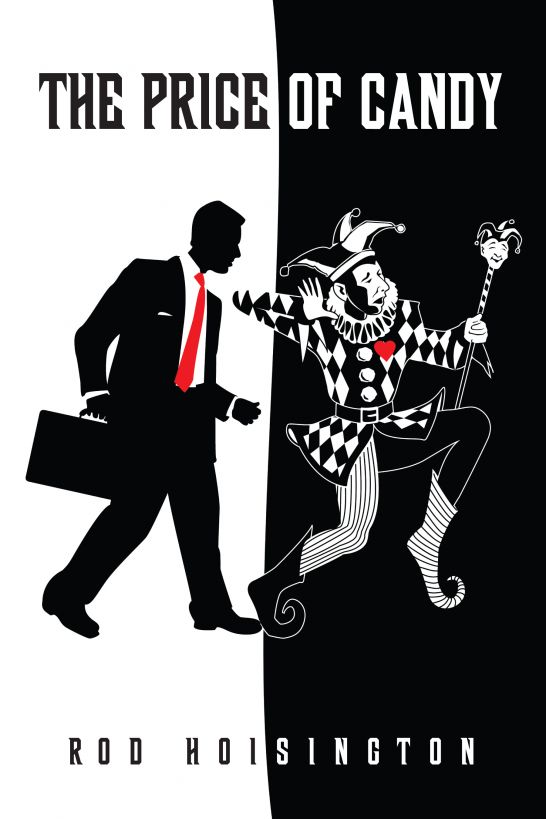 Read what critics are saying about

“
...an excellent plot which keeps readers
glued to the pages until the very end. A great read!”

“
...a clever plot enfolds, firmly
supported by interesting characters. If you like mysteries, you'll
enjoy this one. No loose ends.”

“
...a murder mystery at its best...a great
and realistic story line that will keep you guessing till the
end.”

"If you enjoy mysteries that keep your mind
guessing and racing until the very end, you don't want to miss this
story."

"A very creative and enjoyable first
novel...grabs hold of you early on and you can't get away from
it."

The Price of Candy

This book is available in print at most
online retailers

This eBook is licensed for your personal
enjoyment only. This eBook may not be re-sold or given away to
other people. If you would like to share this book with another
person, please purchase an additional copy for each person you
share it with. If you're reading this book and did not purchase it,
or it was not purchased for your use only, then you should return
to Smashwords.com and purchase your own copy. Thank you for
respecting the hard work of this author.

A passionate wise man will dance down the
path of a fool.

Beyond the solid screen of sea grapes that
lined Highway A1A and down a gentle sea oat covered slope laid an
isolated patch of sandy beach, warmed that late afternoon by one of
the celebrated southerly breezes that enhance Florida in November.
Only the murmur of the ocean disturbed the quietness. On that
secluded beach, cast in the slanted shadows of the sunset, were two
men and a woman. The two men were alive.

One was a sturdy younger man, scarcely
thirty. He wore a
Miami Dolphins’
sweatshirt and slouched
with his thumbs hooked in the pockets of his faded jeans. The other
man was dressed precisely for business except fine sand had
scattered across his well-shined
Testoni
shoes. He walked
away from the body, put both hands to his head, and walked back. He
took off his tailored suit coat and covered the face and upper body
of the woman on her back in the sand. Her orange bikini bottom and
bare legs remained exposed below his coat.

The younger man knelt beside the body and
started to lift the coat. “She really dead?”

“Don’t move that. Don’t look under
there!”

“I’m not looking at
her
. Looking at
her body. She’s not in there anymore. Gone, like up in smoke or
whatever happens.” He raised the coat and made an unhurried
consideration of the body.

“You’re looking at her.”

“Ask her if she cares. Don’t often get a free
peek like this, you know. I’ll just close her eyes so she’s not
staring back at me.” The younger man passed his hand over her face
and the woman’s hushed hazel eyes closed easily.

“That’s what they do in the movies. Read
someplace where some people believe if the eyes are left open, the
dead will look around and spot someone to take with them.”

“Keep your hands off her.” The other man
reached down and readjusted the coat to cover as much of the face
and upper body as possible.

“Who knows what the dead are capable of? This
one’s doing a good job messing with your head.”

The man shook his head. “I...think I’m going
to be sick.” He pulled the knot of his silk necktie loose, tilted
his head back, and took in a deep breath.

“Girlfriend, huh? Lucky man...at least up
until now. She’s definitely from another world. You rich guys get
all the goodies.”

“I don’t think about things that way.”

“You don’t think about money at all. Like you
don’t think about that fancy car parked up there. Just ask for the
best or pick what you want. Like you picked which girl you wanted.
Of course, now you can’t bear to look at her. Guess you’ll just
have to pick another.”

“I don’t need to justify anything to
you.”

“Yeah, the rich never have to justify.” He
made a wide grin. “Your money won’t help when you try to explain to
your wife how you happen to know Miss Universe here and why her top
is off. You’re shaking already.”

The other man stiffened. “Her top came off
when I put my arms around her from the back, you know, that
Heimlich maneuver, squeezing her to stop her choking.” He combed
his fingers through his thin brown hair.

“If you say so. When I first looked down you
were behind her with your arms around her. I saw her top fall off
and her boobs bouncing around. You bet I remember that part.”

“I couldn’t get the damn thing back on.”

“Must’ve been fun trying to stuff ten pounds
in a five pound bag.”

“Do you have to talk about her like that?
It’s not decent. She deserves our respect. She was a nice
girl.”

“You knelt down beside her with your head
down for a long time. What was that?”

“Just crying over her is more like it. Okay,
I guess you tried to save her. Don’t know how you screwed up the
Heimlich. Any dork can do it.”

“I’ve never thought about learning such
things. Things where I must actually touch people. There’s always
someone around to do it. Of course I regret it. Someone trained
might have saved her.”

“You drove here together. I saw you.”

“You saw us? Oh...I didn’t realize that.
She’s sort of a friend.” He wiped his palms on the front of his
trousers.

“I hope my friends do a better job if I
choke.”

“A ride to the beach? That what you’re
saying?”

The man folded his arms across his chest and
didn’t answer.

“I stood up there at the top of that knoll
and watched you. Funny, when she got out of your car and started
changing into that bikini, it looked like you were trying to peek
at her. You’ve never seen your girlfriend naked? She moved to the
other side like she didn’t want you to watch her undress. She
didn’t notice I had pulled in. I’m the one who got the show.”

“So she was modest. Stop saying things.”

“Modest then, won’t bother her a bit anybody
looks at her now.”

“But it bothers me. You shouldn’t speak of
her in that manner. It’s not...honorable. Just keep my coat over
her.” He folded and unfolded his arms again. “You know I tried to
help her. You know I didn’t do anything wrong.”

“Relax, it’s an accident. Like you say, she
choked herself to death. Crazy way to die.”

“I’ve already called the police. Told them
send along an ambulance.”

“You’re really sweatin’ this, aren’t
you?”

“Of course I’m shaken. A person just died
before my eyes. Her dead body is lying there.”

“You don’t know the half of it. You wouldn’t
believe the fallout there’s going to be about this.” He tilted his
head back and closed his eyes tightly.

“So, go. Get out of here. You don’t have to
get involved. I’ll look after her. Things like this happen all the
time.”

“No sweat. Nothing else you can do here. Get
moving the police will be here any second.”

“Then you’ll be in trouble.”

“No, they know me. I live around here. I take
care of some things around here. Nothing bad happened. There’s been
no crime. The M.E. will find she died of choking. Case closed.”

“Yeah, like on TV. Now come on we’ll walk up
to your car. You leave and I’ll wait up there for the police.”

“I should take my coat.” He reached back and
picked it up off the body. He paused to look down at her.
Freddy, you always want things nice and neat
. Good lord, he
thought, does it end this way?

“She should have something over her,” he
said. “I don’t have a blanket in my car. Do you?”

The younger man shook his head.

They reached the top of the sandy knoll and
could now hear the occasional hum of vehicles going by on A1A
beyond the screen of foliage. The older man stopped abruptly and
pointed. “Is that your SUV parked there? Wait a minute, I saw it at
that truck stop up in Jacksonville. You’re lying. You’re not from
around here. You pulled out right behind us on 95.”

“Not me, buddy. I’ve been here all day.
Haven’t been out of town in a month. Now you should get out of
here.”

“I was certain it was your white SUV that
followed us.”

“You’re saying you gave Miss Universe a ride
down here from Jax so she could go to the beach?”

“I can’t leave. I won’t do it.” He wondered
just how much he owed her anyway. He could stay and identify
himself to the police. That wouldn’t bring her back and might
destroy him. Certainly he didn’t owe her that much. “I don’t know.
Will she be okay? Nothing’s going to happen to her?”

“Nothing’s going to happen to her. I’ll keep
an eye on her. Now leave.”

“Well, I guess it’s all right, since the
police are on the way. I truly appreciate your doing this for me.
So, you’ll stay up here and wait up here until they come,
okay?”

Six weeks later, on a too-chilly-for Florida
January afternoon, Sandy Reid was studying at the well-worn oak
desk in Jeremiah Kagan’s law office in Park Beach. She stuck a
bookmark in
Manipulations of Evidence
, placed the brick-like
textbook on her yellow legal-size pad, and pushed them aside. She
replayed the voicemail: “Surprise, Sandra, a voice from the past.
Abby Olin here. Let’s get together and catch up on old times.” The
message was clear enough, but she didn’t remember any Abby.

Since kindergarten, her friends had called
her Sandy. The caller no doubt had read her formal name somewhere,
possibly in the newspaper, although she’d been out of the news now
for a couple of months. Chances are she didn’t know any Abby Olin
and she had an instinctive distrust of anyone who suddenly showed
an interest in her.

Catching up on old times with someone she
didn’t remember held no appeal for Sandy. Although skilled at it,
she considered all small talk with incidental acquaintances a bore.
However, she’d transformed making small talk into one of her
professional talents.

As a field investigator with a defense law
firm up in Philadelphia her job had been to find witnesses who
didn’t want to be found and small talk them into giving statements
they hadn’t intended to give. She was particularly adept at
eliciting an immense amount of often-intimate information from a
stranger in a very short time, like during three minutes on an
elevator.

Some other time, some other year. Perhaps
when she wasn’t overloaded with law school studies and an onrushing
date with the Florida bar exam, she might have time for the luxury
of small talk. She wasn’t complaining about law school; she was
quite comfortable immersed in her studies, if everyone would just
back off and leave her alone for the next four months. Even if this
Abby was a gilt-edged, ideal new friend, Sandy didn’t have the time
for a new friend.

Yet the sly mention of old times hooked her.
There were no old times here in Florida. With only a four-month
history, she was a newcomer. Any old times had to mean up north. So
the caller at least knew that much about her.