Read The Price of Innocence Online

The Price of Innocence 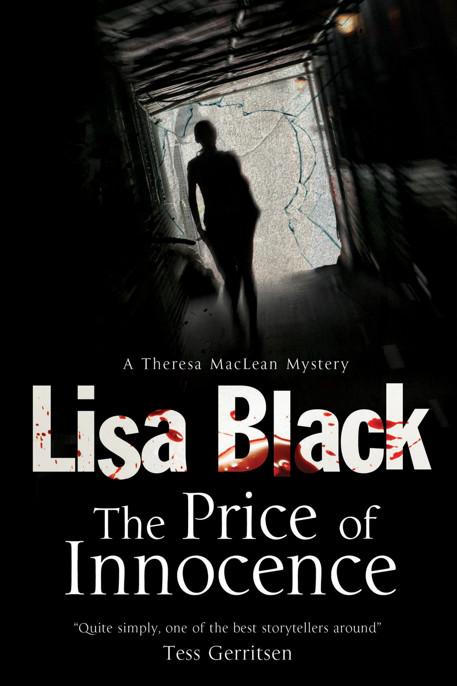 THE PRICE OF INNOCENCE*

THE PRICE OF INNOCENCE
Lisa Black

First published in Great Britain and the USA 2013 by

The right of Lisa Black to be identified as the Author of this work has been asserted in accordance with the Copyright, Designs & Patents Act 1988.

The price of innocence. – (A Theresa MacLean mystery; 6)

For Stanley Joe,
who probably would have gotten a kick out of this

‘You don’t see anything weird?’ the detective asked.

‘Single wound to the temple,’ she said in answer, her forty-year-old knees creaking as she stood up. ‘Stellate tearing, which indicates a contact shot. I felt inside the wound, no surprises there. No defensive wounds, no items disturbed as if there were a struggle, no signs of forced entry. The guy lost his job and his wife in rapid succession and was about to be evicted from this, his trendy loft overlooking the Cuyahoga.’ The sour national economy had nothing on the sour local economy. Worry pervaded the city and sometimes fermented into despair. ‘No, nothing gives me pause.’

‘Nice gun.’ The cop, Frank Patrick, nodded at the chrome-plated Smith & Wesson. This was something cops always noticed and this cop in particular. He spent his paycheck on cars and dates and yet had been trying to establish a gun collection since Theresa gave him a cap gun on his eleventh birthday. Which probably started him on the whole cop thing as his mother, her aunt, liked to point out to her with that baleful stare that only older female relatives can perfect. ‘Ready to go, then?’

They left the fashionable but now sparsely decorated apartment, its air already growing fusty and close. Frank locked the door behind them. He would now retrieve the patrol officer who had gone out for a smoke and instruct him to wait for the body snatchers.

Theresa crossed the wide hallway and pushed the bell for the elevator, noting how the rose walls and white ceiling made the most of the light coming through a wide window to the east. The Bingham apartments were tidy, expensive, and quiet. ‘Who reported the shot?’ she asked.

‘He did. Called the emergency number and told them to come find his body.’ Frank adjusted his overcoat, too warm in the sunlit hallway. He wore the standard detective uniform of trimmed mustache in sandy blond, dark slacks, white shirt and a loosened tie that had seen better decades. He lived on long hours and fast food, which made her worry, but managed to stay relatively slender, which made her envious. ‘No one here reported a shot. Most people in this city can’t afford rent like this any more; those who can are probably at work right now to pay for it. The walls are thick enough to soundproof the sound from anyone who
is
home. The place is built like a bomb shelter. Literally,’ he added, nodding at the small plaque on the wall next to the elevator bank, which said the building had been classified as a fallout shelter.

The elevator arrived. A young couple got off, as beautiful and trendy as their surroundings, the man in a silk sweater and the woman in strappy sandals worn too soon in the spring for real comfort. They looked too young even to know what a fallout shelter was. Hip to hip, arms around each other, oblivious to the rest of the world, and not even the very functional and unromantic briefcases they both carted could spoil the image of a fresh and perfect love. Theresa stared at the floor, carefully stepping over the elevator’s threshold. If there were one subject she could permanently forbid her mind to ponder, it would be fresh, perfect love. Or old, broken-in love. Or even a strong case of lust.

‘What else you got going on?’ Frank asked, and pushed the
L
button.

Shake it off. ‘I have to run the gunshot residue samples, put together some sort of lecture for my college alumni group, and I’m still sorting out fingerprints from that weekend homicide. Leo will start nagging every half-hour on the half-hour if I don’t get that report on his desk. How about you?’

‘I have to interview eight of the weekend homicide’s closest friends and relations. All of whom will lie to me.’

‘Friends don’t get too up front about dead friends’ coke trade, especially when they’re an employee.’

‘Better living through chemistry,’ she quoted. They crossed the lobby behind a man in a white shirt and tie, who held the door for them as they exited. From the landing Frank could scan the parking lot for the patrol officer and Theresa appreciated the sight of Cleveland in spring, the sky a cobalt blue, the breeze from the lake hinting at dead fish and summer. The weather could change to something dark and dangerous at any moment, of course, but that had to be accepted as a fact of life. It was apparently a beautiful day. The victim in his pricey high-rise had apparently committed suicide, another victim of the economic downturn. She and her cousin apparently had little else to discuss other than their jobs. She was apparently lonely.

She had learned from her years in forensics that true mysteries weren’t as common as one might expect. What seemed apparent was, more likely than not, true.

A rumble sounded behind them, not like one man’s gunshot muffled by the walls but a hundred such gunshots muffled by an entire building. At least that was how she thought of it later. In reflex her body began to turn toward Frank, to seek his input, when the world around her exploded into a blinding flash of noise and power.

S
he did not lose consciousness, only felt the bewildering rush of uncontrolled movement as air and brick threw her into an abyss of sound that ended, painfully, in a tumble across the parking lot. Then her body lay, curled in the fetal position, on a paved surface covered with a vicious sandpaper of sharp grit. She tried to suck back the breath that had been knocked out of every last alveolus, and choked on dust and an overpowering smell.

She rocked to her hands and knees, feeling tiny bites as thousands of shards of destroyed stone and brick and wood bit into her skin, breathing in only smoke and dust. Watering eyes opened on destruction as seen through a heavy fog and all noise had been dampened. She tried to call her cousin’s name but produced only a rasping hack.

Theresa heard a moaning sound, and for one terrible second thought it came from herself. Then she heard it again. She pivoted, tried to get her bearings as the air began to clear. She stood on what had been the sidewalk in front of the Bingham building, the eastern border of the property, now littered with detritus. Almost the entire building lay as a heap of rubble, and she had no way to guess how many human bodies lay crushed beneath it. A few moments before it had been a hive of beautifully renovated lofts; now, sharp stones pushed up into a still-swirling mist of plaster dust that persisted even in the Lake Erie breeze. A boot edged over the precipice of what was left of the fourth floor in the north-west corner of the building, the only part of the structure still standing. She hoped the boot would be empty.

West Ninth Street held some debris but seemed passable. Other Warehouse District dwellers crowded their windows to look down; some of the glass in nearby buildings had been broken by the shock or by flying rubble. Sirens wailed in the distance, coming rapidly closer and making it even more difficult for her shocked eardrums to listen.

Theresa focused her hearing, trying to eliminate the sirens and pick up that low moan again – one of the advantages of years spent in a school band. There.

Theresa scanned the ground somewhere to the left of her, which quickly turned from scattered chunks of building over black asphalt to an inclining and rocky terrain. The acrid smell became stronger as her feet disturbed the stones anew. ‘Frank!’

Flashes of color were everywhere, shards of appliances or furniture or clothing, but nothing moved, nothing appeared to be bloody flesh. She stopped and listened, a nearly impossible task with every fire rescue truck in the city now bearing down on her.

Not a hallucination or a trick of the air. Theresa scrambled into the pile of leftover building to her south-west, peering into the darkness between the bits. Then she heard, not a moan, but the soft
chink
of stone against stone.

There
, about ten feet to her right. And then the moan came again.

She crossed to the area and began to dig without full awareness of the motion, only of the stones under her unprotected hands and how some had smears of blood on them. Under the first few inches she found a brown leather shoe. When it moved, Theresa knew she was standing on his shin, and jumped to the side. More rocks and glass revealed torn denim jeans and a green sweater. This was not Frank.