Read The Princes of Tangleforest Online 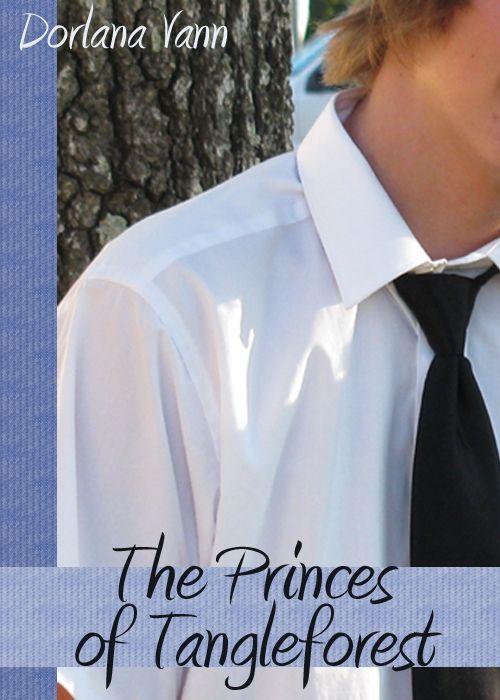 Although the girly-girl-filled lunch table buzzed with excitement over the cute new guy with the mess of blond waves, Julia Webster tried to ignore him. Even if she hadn’t watched Tanner Dobbs ride up on his skateboard this morning, she would’ve guessed he was a skater—graphic tee, baggy shorts, Vans. Plus, it was easy to conclude, after watching him walk into third period with a confident stride and nonchalant attitude, he believed he was cool. And the one thing she knew for sure: his type never liked her type.

One of the girls at her table said, “He’s coming this way.”

Julia wasn’t surprised that, out of the entire cafeteria, he migrated toward her table. Tanner had been through half of his first day, so he must have noticed the strangeness of Tangleforest Senior High. She figured the colorfulness of the students at her table gave him a sense of adolescent normality when nothing else in the school even came close to the norm.

After a loud group-gasp from the girls at her table, her head automatically jolted up and found the source. The Princes stood between Tanner and the safety of their table. Didn’t take them long, she thought.

No matter how much the Princes had changed the other students, they remained the same. First in command was Zachary Davis: Julia’s ex and the son of Dr. Davis, Tangleforest’s own celebrity psychiatrist. Zachary was wealthy, tall, slender, and his nerd roots ran deep: smart, sci-fi loving, black glasses, and a goofiness that couldn’t be suppressed, no matter how popular he became. And the only reason he no longer sported a cowlick was because before they had broken up, Julia had convinced him to let her cut his hair super short.

Next to Zachary sat Julia’s former best friend, Darla. Darla wore her hair in pigtails, which bugged Julia to no end.
Pigtails!
She was shorter than Julia, skinny-skinny, and was now the most pursued girl in school. However, Darla only had pitiful eyes for Zachary.

And then there were the Pittman twins:  Scrawny Johnny—red straggly hair, and Big Sean—brown flat top. Up to that year, they had spent their school career being shoved into lockers and underwearless, just in case of a wedgy attack.

Julia watched as Zachary tried to touch the new guy’s arm, but he jerked away, giving Zachary a, “What the hell?” glare.  Probably either sensing something off, or more likely, he had a predetermined opinion of nerds and didn’t want to be associated with them on his first day.

Julia took a bite of her salad and felt Tanner’s arm brush against hers as he sat down right beside her. The entire table went on immediate ignore; a rule they had all accepted in order to keep from being too disappointed. They knew, sooner or later, the Princes would have their “little talk” with Tanner, and he would then look down his nose at them, like they were at the bottom of the food chain. As Julia imagined the outcome, Tanner didn’t turn out like one of the nerd Princes at all. Instead, as she thought about him walking into the lunchroom in slow motion, he actually looked pretty hot, dressed in a black suit with his hair slicked back, dark shades and a cool swagger.

“Why do you have that goofy look on your face?” Julia’s new “best friend” Ashley asked. Ashley, the girl whose face had the word “bitch” printed across it in all of Julia’s yearbooks.

“Oh,” she said. “Nothing. Just thinking about my next hair design.”

“Hair, hair…
hair.
I’ve never seen anybody so obsessed with hair. I mean... I am, but that’s different. I’m obsessed because mine is so fabulous. You actually want to touch
other people’s
gross, nasty hair.”

“Yeah.” She rolled her eyes in disgust. “But I’m not actually going to get a J.O.B. cutting hair.”

“Doesn’t matter. I’ll be getting my M.R.S., and then my attorney husband can do all the working, and I’ll do all the shopping.”

“Maybe I
should
send you over to the Princes’ table.”

Ashley flipped her hair. “I don’t see why my career goals have to be like everyone else’s.”

Julia never considered being a wife as a career, but she knew she wouldn’t want Ashley doing her taxes or her therapy. “Touché.” Julia sighed.

“Too what?” Ashley asked.

“Never mind.” Julia shook her head. “All right.  The only problem I see with your plan is that you have to make the grades to get into college and then law school. Right now, you might
qualify for community college.”

“Whatever,” Ashley said, “because
right now
I would settle for any place where those so-called
Princes
won’t be. Once I get out of Nerdville, I’ll be popular again.” She smiled and gleamed up at the ceiling. “The girls will resume their places as my shadows, and all the boys will want to date me again because I’m me and not because…” She glanced at the new guy and then back to Julia. “Well… you know why. I still can’t believe any of this has happened. You don’t understand. You’re
used
to not getting any attention. It’s so bizarre-o not having boys…” She turned her attention fully on the guy sitting next to Julia. “Hi.” She smiled showing her orthodontist’s daughter’s teeth. “What’s your name? Where did you move from?”

The fact that Ashley had broken the table silence rule didn’t surprise or really bother Julia because the idea of being able to talk to someone about something other than clothes and boy bands was appealing. However, what did bother her was the fact that Tanner had probably already come to the false conclusion that she was cool. And even if, by some miracle, the Princes decided to leave him alone, she knew Tanner would soon discover that her make-up and black clothes hid more nerd than ninety percent of the school population, and that would be the end of that. Besides, she didn’t need the aggravation or another rejection. Therefore, the best thing for her to do was to not even try.

Tanner had attended a lot of different schools; they all had one thing in common—clearly defined groups in the lunchroom. Not this school. The girl sitting next to him dressed punkish, and another girl at the table looked Goth, and there were the cheerleaders.  Ashley, the girl who had asked him the questions, reminded him of the chicks at his other schools who had been part of the so-called “popular crowds.” Also strange, it seemed as though all the students, except for this
one
table, had a similar appearance and attitude: studious.

The girl sitting beside him scoffed. Her purple hair stood straight up in a Faux-hawk. She wore black, and the slight movement of her head revealed the tiny glimmer of a nose ring. Her appearance ruled out the possibility that the school just had a very strict dress code.

“Julia, right?  Didn’t you say something about a princess? I’ve been hearing that all day.”

She seemed a bit annoyed, so he put his attention back on his plate. Wishing he wouldn’t have scarfed down his pizza so fast, he picked up his fork and stuck it in what resembled a grape in what he figured used to be fruit salad. He asked, “Who are they?”

“The same guys who stopped you before.”

“Stay away from them if you want to stay… cool,” Ashley said. “We need one normal guy in this school. You’ll be
very
popular with this table.”

Everyone laughed again, except for Julia.

The girls began to talk amongst themselves once again, glancing at him every so often. He started to feel a little more at ease and even pretty cool, until he peeked at Julia who still ignored him.

“Those guys back there?” he asked her. “If you’re talking about the guys who stopped me and asked me to sit with them at their table, you don’t have to worry. I’m not a nerd.”

“Not yet,” she said, and without a glance, she stood up.

Tanner watched her walk away and thought about his day and especially about how odd second period had been. Johnny, one of the weird dudes who had stopped him, had been in that class.  Johnny was the sort of guy who would’ve been invisible to Tanner at any other school: small, red-headed, and his momma dressed him funny. Yet he seemed like the star of the classroom. When he walked in, everyone hushed. When he spoke, everyone listened attentively and laughed at the appropriate spots. Girls circled around him, and one totally gorgeous chick held his hand. He remembered thinking: No way is she his girlfriend.

At one point Tanner could have sworn that the
teacher
had
actually flirted with Johnny, and she let him teach. Hell, Tanner even thought
he
liked him by the end of class.

As he thought about his other classes, he remembered how everyone sat up straight and attentive. How they all raised their hands when the teacher asked a question. Everyone turned in homework assignments. No one talked when the teacher talked, and no one slept in the back of the classroom.
Every
student was the smart kid, the teacher’s pet… the geekster. At least he had begun to see why the school ranked top in the country. But how could it be possible for the entire student body to be smart and to “apply” themselves?

Tanner turned his head to see the group of four students Julia had called the Princes standing next to him.

“We just want to talk to you,” the tallest one said.

Tanner jumped up, pushed past them, and left the lunch room.

As he put books inside his locker, he thought about what his friends from his old school would say about him running away from nerds. What was he doing? Why did he wimp out?

While he watched all the new faces walk past him, eventually leaving him in an empty, clean hallway, he tried to wrap his mind around the whole distorted, geeky environment. He figured he would do a little searching on the internet after school to see if there had been some sort of chemical spill in Tangleforest, Texas that would explain everyone’s crazy behavior. Or some dork disease. “Maybe I better not drink the water.”

The Night Caller by Lutz, John
SubmittingtotheRake by Em Brown
Seduced by Three by Sylvia Ryan
Awakening the Wolf by Crymsyn Hart
Fiasco by Imre Kertesz
Omega's Run by A. J. Downey, Ryan Kells
Scenes From Early Life by Philip Hensher
All She Ever Wanted by Barbara Freethy
Road to Casablanca by Leah Leonard
Woman with a Secret by Sophie Hannah