Read The Promise of Peace Online

The Promise of Peace 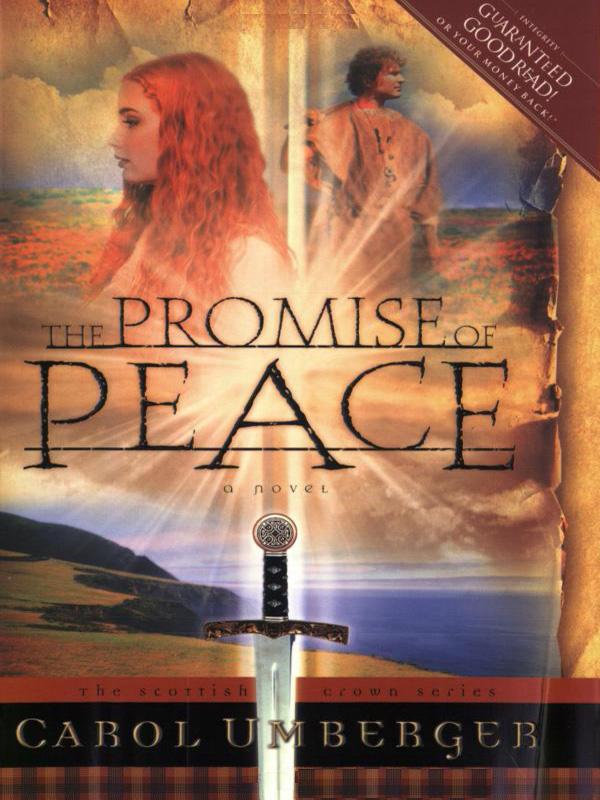 THE
PROMISE
OF
PEACE

THE PROMISE OF PEACE

All rights reserved. No portion of this book may be reproduced, stored in a retrieval system, or transmitted in any form or by any meansâelectronic, mechanical, photocopy, recording or any otherâexcept for brief quotations in printed reviews, without the prior written permission of the publisher.

Scripture quotations are taken from the King James Version of the Bible (KJV).

ALSO IN THE SCOTTISH CROWN SERIES

Circle of Honor
The Price of Freedom
The Mark of Salvation

To the men and women, past and present,
of the US Military Services.
You know the true price of freedom and peace.
God bless you.

M
Y SINCERE THANKS to the many readers who have written to encourage me and to ask for another story. Here it is, as promised.

A warm thank you to the Thursday night Improv group at Barnes and Nobleâyou know who you are. Thanks for your smiles and encouragement. May you each write to whatever level of success suits you best.

A huge thanks to Maureen Schmidgall, who bravely read the manuscript at its worst and always put smiley faces with her suggestions for improvement.

Thanks to Donnell and Beth for insights into teenage rebellion. Best of luck in your own writing endeavors.

A big thank you to Angel Smits, a wonderful writer who understands when I tell her the symbolism isn't working and then helps me fix it.

Thank you, Betsy Wintermute, for sharing your knowledge of horsemanship and all things medieval.

Thank you, Heather Peterson, for allowing me to ride the real Shadow, a magnificent eventing and dressage thoroughbred gelding. And to Shadow himself, who made jumping 18" seem as exciting as a sixfoot fence!

As always, a big thanks to my wonderful editor, Lisa Bergren.

And thanks and praise to the God who promises us peace beyond our understanding, if only we believe.

I hope that you have enjoyed this final book in the Scottish Crown Series. Like you, I will miss these characters who have become friends. But there are more characters waiting in the wings for me to tell their stories.

Despite his many successes, Robert the Bruce's one regret was that he never fulfilled his promise to go on Crusade. On his deathbed in June 1329, he asked James Douglas to take his heart to the Holy Land. After Bruce's death, Douglas had the king's heart embalmed in a small silver casket that Douglas then wore on a chain around his neck. On March 25, 1330, Douglas rode into battle at Zebas de Ardales and was killed in the ensuing fighting. The casket was removed from Douglas's body and returned to Scotland, where it was buried at the Abbey of Melrose.

Scotland's peace with England was short-lived. By 1331, Thomas Randolph was also dead, leaving young King David to reign without the help of his father's most trusted advisor. Two years later, Edward III disavowed the treaty he'd sealed with the marriage of his sister to David Bruce, on the grounds that Edward was under-age when he signed it.

Warfare between England and Scotland broke out again and continued on and off for the next four hundred years. Never again did a king or general with Bruce's gifts arise in Scotland. But Bruce had forged a sense of nationality that has not deserted the Scottish people to this day.

I have tried to capture some of the history and customs of fourteenth-century Scotland, and I beg forgiveness where I felt it necessary to take liberties for the sake of clarity. If you would like to learn more about this time period, I highly recommend
Robert the Bruce, King of Scots
by Ronald McNair Scott.

For news about my upcoming releases or to contact me, please visit my website at
www.carolumberger.com
, or you may write in care of Integrity Publishers.

F
RESH FROM A DECISIVE VICTORY over Robert the Bruce, Ian Macnab and his older brother followed the Prince of Wales and his retinue of knights. In pursuit of Bruce and what remained of the Scottish army, the English knights and a handful of Scottish loyalists were anxious to blood their swords again.

But Bruce had melted into the highlands. Seeking an enemy, any enemy, the prince ordered an attack on the small, unarmed village of Midvale. The English were destroying the village for no other reason than that it lay in their path. As anxious as his comrades for more of victory's promise, this was too much for Ian. What madness had swept over these men? He watched as the thatch on a cottage caught fire and its occupants raced for the cover of the nearby woods. The smell of smoke and screams of women and children filled the air. Village men armed with pitchforks tried in vain to turn back the attack. Ian longed to come to their rescue, but even with Angus's help, there was little they could do to affect the outcome.

In the confusion of the charge, Ian spurred his horse next to his brother's. “This is wrong, Angus. We must not attack innocent people. Come, let's be gone!”

“Stay then. I'm riding out.” He turned his horse and rode to the top of the hill overlooking the village. There Ian watched in shock, shaking his head as if doing so would make the carnage before him disappear. He clutched his sword as anger, fear, and finally revulsion raced through him.

Angus soon joined him on the hilltop.

It might be futile, but he couldn't just sit here and watch. “We must find a way to stop them!” Ian took up his reins to ride to the rescue of the innocents being slaughtered before them.

Angus Macnab grabbed at Ian's reins. “Nay, don't be foolish. Ye were right not to be party to this but ye'll not stop the prince when the bloodlust is on him.”

“We must try. What if this were Innishewan?” Their home and village were safe well across the country in Argyll. But that didn't make it any easier to see this unfamiliar hamlet senselessly destroyed. Angus shook his head as Ian's bay pulled and shied from Angus's grasp. “If we attempt to stop the prince, he will have us cut down, and then we will be no help to anyone.”

Ian had no doubt what Angus said about Prince Edward was true. The prince's capricious emotions and mighty temper were as feared as his father's.

Angus Macnab let go of the reins and pointed to the west of them. “There, brother. There ye may do some good.”

Ian looked to where Angus pointed and saw a tree-lined creek and, yes, movement and color within the woods. Some of the unfortunates had managed to escape from their homes to seek refuge where it could be found.

“Those will need help and I'm for it,” Angus said. “But them in the village are beyond our help.”

Though everything in him cried out to rescue those still in the village, Ian knew his brother was right. No sense in seeking a needless death. They were going to be in enough trouble for refusing to attack in the first place. Reluctantly he nodded.

Angus said, “We'll help as we can and then slip into the hills for a time.” They raced their horses to the creek, where they found women and children, many of them wounded. Innocents, every one.
The Prince of Wales.
Ian spit on the ground.

He and Angus were joined by a cousin, Duncan, who had also declined to join the prince's butchery. Though none of them were experienced healers, all of them had tended to battlefield wounds before, and they set to work with little conversation.

Ian bound a gash on the arm of a woman not much older than his daughter, Morrigan. A warrior in her own right, Morrigan had ridden with them earlier today. She had suffered a nasty cut in battle and he had sent her home for his wife, Eveleen, to tend.

Then he turned to face a young woman who was wailing over a dead infant in her arms, his tiny leg slashed to the bone. The child had bled to death. With agonizing motions, Ian caressed the young mother's face and gently pried the boy from her arms.

“Please, let me hold him . . . just a wee bit longer.” She bit her lip, nodding as tears streamed down her red face. She sank to the ground, weeping, face in hands.

Ian turned to face his brother, raising the child to make sure Angus could see. “I'm glad Morrigan did not witness this.” He drew a breath, determined that Angus should understand how he felt, staring down at a lad who would never have the chance to wage his own battle, never have the chance to look out for his own family, his own country. “I'll not follow the prince in battle again, Angus. He disgraced the title of knight today, he and the men with him.”

Angus said nothing, probably hoping Ian would get his emotions under control and see reason. Angus's reason. 'Tis how it had been all their lives. Except once.

Ian turned and helped the woman to her feet, then returned the child to her arms, whispering assurances that he would help bury the child; that while all seemed lost, God had not abandoned her. He looked down the hill to the smoking village. The English were gone now, and the people were returning to what was left of their homes. They looked as dazed and disoriented as Ian felt. But he was rapidly regaining his bearings.

Scotland's king had been treated with treachery, with no hint of honor. The Earl of Pembroke had declined to fight when Bruce challenged him, saying the day was too far gone. The two generals had made a gentleman's agreement to commence the battle the next day at first lightâa customary agreement. Bruce and his army had made camp and bedded down for the night.

However, despite his assurances to Bruce, Pembroke had waited until the Scots were sufficiently off guardâwith tents pitched and supper cookingâand then he'd attacked, routing the Scots and nearly capturing Bruce in the chaos. “Where was the law of chivalry yesterday, Angus? Pembroke did not keep the faith, and neither did the prince. Mayhap Gordie had the right of it, giving his loyalty to Bruce.”

Written in My Own Heart's Blood by Diana Gabaldon
The Belgravia Club by Fenton, Clarissa
Gerard by Kathi S. Barton
Fury by G. M. Ford
Psycho Alley by Nick Oldham
Sculpt-Paige_Michaels-Becca_Jameson by Becca Jameson and Paige Michaels
The Temporary Betrothal by Lily George
Disguise by Hugo Hamilton
Make Me by Lee Child
The Perfect Mess by K. Sterling