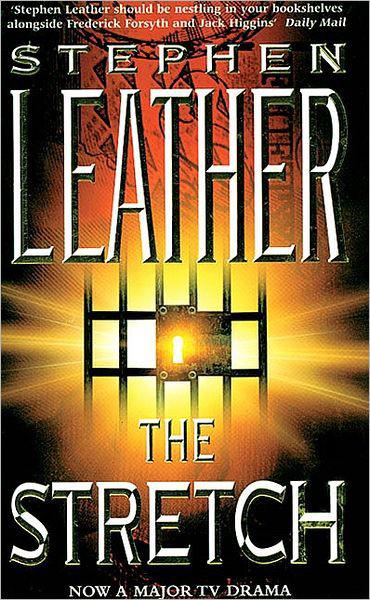 About the author
Stephen Leather was a journalist for more than ten years on newspapers such as
The Times,
the
Daily Mail
and the
South China Morning Post
in Hong Kong. Before that, he was employed as a biochemist for ICI, shovelled limestone in a quarry, worked as a baker, a petrol pump attendant, a barman, and worked for the Inland Revenue. He began writing full-time in 1992 and
The Stretch
is his twelfth novel. His bestsellers have been translated into more than ten languages. He has also written for television shows such as
The Bill, London’s Burning
and
The Knock.
Stephen Leather now lives in Dublin.
You can visit his website at
www.stephenleather.com
Also by Stephen Leather
Pay Off
The Fireman
Hungry Ghost
The Chinaman
The Vets
The Long Shot
The Birthday Girl
The Double Tap
The Solitary Man
The Tunnel Rats
The Bombmaker
The Stretch
Tango One
The Eyewitness
Hard Landing
Soft Target
Cold Kill
THE STRETCH
Stephen Leather

www.hodder.co.uk
Copyright © 2000 by Stephen Leather
The right of Stephen Leather to be identified as the Author of the Work has been asserted by him in accordance with the Copyright, Designs and Patents Act 1988.
First published in Great Britain in 2000 by Hodder and Stoughton
A division of Hodder Headline
First published in paperback in 2001 by Hodder and Stoughton
All rights reserved.
No part of this publication may be reproduced, stored in a retrieval system, or transmitted, in any form or by any means without the prior written permission of the publisher, nor be otherwise circulated in any form of binding or cover other than that in which it is published and without a similar condition being imposed on the subsequent purchaser.
All characters in this publication are fictitious and any resemblance to real persons, living or dead, is purely coincidental.
British Library Cataloguing in Publication Data
Leather, Stephen
The Stretch
1. Suspense fiction
I. Title
823.9’I4 [F]
Epub ISBN 978 1 84456 860 4
Book ISBN 978 0 340 77033 7
Hodder and Stoughton
A division of Hodder Headline
338 Euston Road
London NWI 3BH
www.hodder.co.uk
CONTENTS
The Stretch
About the Author
Also by Stephen Leather
Copyright
Prologue
Dedication
Book
For Judy
PROLOGUE
The gun went off, catching Preston Snow by surprise, and he felt as if he’d been punched hard in the stomach. There was no burning sensation, and surprisingly little pain, just a dull ache and a spreading coldness. His eyes widened as he stared at the face of the man who’d shot him. Unfeeling blue eyes stared back at him.
Snow clutched a hand to his stomach and staggered backwards, blood pulsing from between his fingers. There seemed to be a lot of blood, but still he was hardly aware of any pain.
The man with the gun watched dispassionately, the gun now at his side. His face was totally blank as if he had absolutely no interest in whether Snow lived or died.
Snow felt the strength drain from his legs. He stumbled over a coffee table and fell on his side, barely conscious of where he was. The coldness was spreading from his stomach, up across his chest, a coldness that seemed to be drawing all the strength from his limbs. He tried to speak but no words would come and it was an effort to breathe. He managed to get up on his hands and knees and crawled towards the stairs.
The man who’d pulled the trigger stood in the middle of the room, watching Snow with a look of bored disinterest.
Snow scrambled up the stairs, frantically trying to get away from the man. He had a gun upstairs, somewhere. It was in one of the drawers in the bedroom. If he could get to it, if he could defend himself, then maybe, just maybe, he’d stand a chance.
His tracksuit top was drenched in blood and it flopped around as he crawled. He heard footsteps behind him but he didn’t look back. He felt himself drifting in and out of consciousness and shook his head fiercely, trying to clear his thoughts. ‘Stay focused, man,’ he muttered to himself. ‘Stay fucking focused.’
He looked down at his stomach as he crawled and saw blood dripping down on to the threadbare stair carpet. He tried to stem the bleeding but as he pressed his hand against his stomach a bolt of pain shot through his midriff. He grunted. It felt as if a hot knife had been twisted inside his stomach.
‘For fuck’s sake, Snow, will you stay still!’ shouted the man with the gun.
Snow took a quick look over his shoulder. The man was standing at the bottom of the stairs, gesticulating with his gun.
Snow reached the upstairs landing and pushed himself upright. He staggered towards the bedroom, putting his free hand against the wall to maintain his balance, smearing it with blood.
The man followed him up the stairs. He took his time, with a lengthy pause between each step. It was the precision that Snow found terrifying. The man was taking it slowly, knowing that he had all the time in the world: no one would come to Snow’s aid. If anyone had heard the gunshot, they wouldn’t want to get involved. It wasn’t the sort of area where people telephoned three nines.
Snow collapsed in front of the dressing table and pulled out one of the drawers. No gun. He cursed. Where’d he put it? Where the hell had he put it? He tried to concentrate, tried to remember where he’d last seen the weapon. He pulled open a second drawer and rifled through socks and underwear, cursing his stupidity for not having the gun out in the open. No gun. He tore the drawer out of the cupboard and tipped the contents on to the floor and searched frantically. It wasn’t there.
There were footsteps behind him and Snow twisted around. The man stood in the doorway, the gun at his side, a confident smile on his face. Snow’s head swam and he slumped backwards, sliding down against the dressing table, his head banging against one of the open drawers.
Snow’s eyes fluttered shut. He could feel consciousness slipping away. The pain was going, replaced by a warm glow. He sighed and his hand slipped away from his stomach, drenched in blood.
The man walked over and looked down at Snow. He prodded Snow’s leg with his foot, but Snow didn’t react. Snow’s chin was down on his chest and a bloody froth dribbled from between his lips. Blood pooled on the floor around his waist, a thick treacly redness that seemed to sit on the surface of the carpet, refusing to sink into the pile.
‘You dead, Snow?’ he sneered. ‘Don’t tell me you’re dead already.’
He raised his foot and stamped down on Snow’s hand, crushing his bloody fingers. Snow’s eyes opened wide and he screamed in pain. The man grinned triumphantly and levelled the gun at Snow’s face.

They filed into the jury box one by one, and Sam Greene could tell by the way they avoided looking at her that the news was bad. Her heart sank.
‘It’ll be okay, Mum,’ said her son Jamie, giving her hand a small squeeze.
Sam shook her head. ‘No, Jamie,’ she whispered. ‘It’s not going to be okay.’
Sam’s husband looked across at her from the dock. ‘Chin up, love,’ he mouthed. Terry looked tired. There were dark patches under his eyes and when he smiled Sam could see the worry lines etched into his forehead. She was sure there was a touch more grey at his temples but he still looked good for fifty-two though; broad-shouldered and flat-stomached with the confident good looks that turned the heads of women half his age.
Sam fingered the small crucifix that was hanging around her neck on a thin gold chain. And hadn’t that always been Terry’s problem, she thought. Too handsome for his own good.
Sam tried to smile back at Terry but she could feel tears welling up in her eyes and she blinked them back. It wasn’t fair. Her husband’s fate lay in the hands of twelve men and women who knew nothing about him, and yet they and they alone had the power to put him behind bars for the rest of his life.
Sam watched them as they took their seats. Eight women and four men. That was in their favour, Terry’s solicitor had said, because Terry was a good-looking guy and women were less likely to convict a man that they fancied. Three of the jury were black, and even Laurence Patterson had to admit that that wasn’t such good news, because the man Terry had been accused of shooting was black. ‘When all’s said and done they do stick together, Samantha, but let’s look on the bright side, shall we?’ he’d said, and he’d patted her gently on the shoulder the way you’d console someone at a funeral. That’s what it felt like, Sam realised. It felt like a funeral. Everyone dressed in their Sunday best, faces sombre, avoiding eye contact, all gathered together to say a final farewell to Terry Greene.
A tear ran down Sam’s cheek and she brushed it away with the back of her hand, determined that no one would see her cry. She knew there’d be photographers outside and they’d like nothing more than a picture of her with tears running down her face. She’d been in court every day, and without fail the tabloids had carried photographs of her arriving or leaving, always mentioning the fact that she was forty-eight years old and that she used to be a singer and dancer. ‘Faded Sixties singer’ one of the
Daily Mail
’s more acid female feature writers had called her, and Sam had silently seethed at the unfairness of that. Her career had barely started to get off the ground before she’d met and married Terry, and as for ‘faded’, that was just malicious. She was the mother of three grown-up children and under more pressure than she’d ever been in her whole life, how was she supposed to look? Radiant?
Considering the pressure she was under, Sam figured that she looked damn good. At least one of the prosecution lawyers kept looking at her with more than a professional interest, smiling each time he caught her eye. Every morning she took take extra care to get her make-up just right, enough to cover up the effects of not-enough sleep, but not so much that she’d look as if she was trying too hard. And she’d been to the hairdresser to get her hair colour topped up just before the case started. Again, nothing too obvious, but she needed a little help to keep its original dark blonde sheen.
Patterson twisted around in his seat and gave her a confident smile. She acknowledged him with a nod but couldn’t bring herself to smile back at him.
ADS
15.4Mb size Format: txt, pdf, ePub

Red Red Wine (Tastes of Seduction) by Jess Dee
Avalon by Stephen R. Lawhead
Day of Atonement by Faye Kellerman
My Map of You by Isabelle Broom
Annie on the Lam: A Christmas Caper by Jennifer Archer
Ash by Herbert, James
The Blazing World and Other Writings (Penguin Classics) by Cavendish, Margaret
Storm Front by Monette Michaels
Once Shadows Fall by Robert Daniels
The Dead Lake by Hamid Ismailov