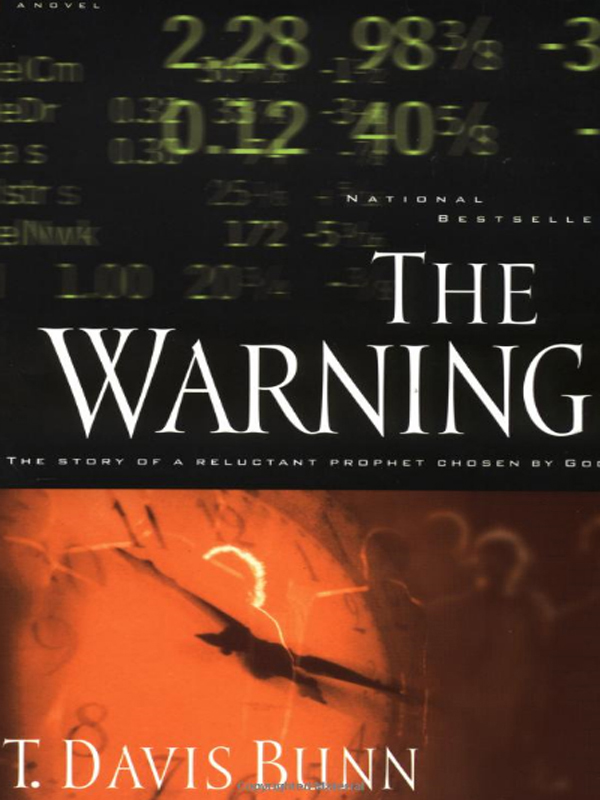 All rights reserved. Written permission must be secured from the publisher to use or reproduce any part of this book, except for brief quotations in critical reviews or articles.

Scripture quotations marked KJV are from the KING JAMES VERSION of the Bible.

This novel is a work of fiction. All characters, plot, and events are the product of the author's imagination. Any financial information or advocacy contained herein is purely fictitious.

This book is dedicated to
Irven and Joanna Hicks
Twenty years ago, a young man ventured into
a Christian bookstore for the very first time.
Joanna introduced him to Christian fiction,
and Irven to contemporary Christian music.
Their patient sharing changed the course of his life.
He would once again like to say

“Where there is no vision, the people perish.”
Proverbs 29:18
KJV

The first Wednesday after Labor Day, Buddy rose from the nightmare like a drowning man fighting for the surface of the sea. Gasping and struggling and groping, he came awake with a hoarse shudder. It took a moment to get his breath under control before he could swing his legs to the floor and sit upright. He remained there, sitting on the side of the bed and gripping his chest against the sudden pain.

As he padded toward the bathroom, his wife asked quietly, “The dream again?”

“Yes.” Buddy shut the door, stripped off his sopping pajamas, and washed his face. It had become a nightly routine. He glanced at the clock. Five o'clock in the morning. No chance of getting back to sleep.

When he came out, his wife was already up. He could hear her moving about the kitchen downstairs. He returned to the bath, ran himself a shower, and then dressed. The final words whispered through his mind the entire time, shreds of a dream which would not let go.
Forty-one days
.

He entered the kitchen to hear her say, “I'm calling the doctor first thing this morning. I want her to see you before you go to the office.”

Buddy shook his head and finished knotting his tie. “What can Jasmine tell me about nightmares?”

“It's more than a nightmare, and you know it.” Molly did not raise her voice. Molly seldom did. She was the quietest woman Buddy had ever known. But she held her opinions with silent conviction and protected her family with iron strength. “It's been more than two weeks now. Every night you wake up gasping and screaming and wet.”

“She'll want to give me some pill.” Jasmine Hopper was both their family doctor and a friend from church. “You know how I hate pills, Molly.”

“Well, maybe this time you'll just have to take one.” She turned to him and asked, “Eggs?”

“Why not.” The wall clock read a few minutes to six. “I'll need something substantial to see me through to lunch.”

“I spoke with Clarke Owen yesterday. Our prayer circle is going to start praying for you.” She moved to the refrigerator and said as she returned to the stove, “Anne and Trish were over yesterday. They are going to talk with their Bible study groups and ask them to pray as well.”

“For Pete's sake, Moll. You might as well have told the whole world.” Clarke Owen was the assistant pastor and a close family friend. Anne and Trish were Buddy's two daughters-in-law. Good girls, but they did love to talk. “If they know, the entire town will be talking about it by dinnertime.”

“This is a whole lot more than a little.”

“You're always so independent. Standing there as though nothing ever bothers you. Well, something is wrong, and I'm worried. I decided to ask almost everybody I know to help pray us through this.”

Buddy stared across the counter at his wife. That was a very long speech for Molly. She was given to using one word where other women would use twenty, and to using silence most of the time. “You mustn't worry, honey.”

“But I am worried. I see the way you hold your chest when you wake up. I hear how you gasp for breath, as if you can't get anything into your lungs.” She brought over his plate and set it down in front of him. “Night after night I hear this. I know how you wake up soaked with sweat, how you have to lean on the wall to steady yourself when you rise.”

“Aren't you having anything?”

“I'm too anxious to eat.” She knotted the dish towel in her hands. The scar that emerged from her robe and covered the left side of her neck and chin was flushed with distress. “Promise me you'll call Jasmine today.”

“All right.” There was too much concern in her eyes for Buddy to refuse her anything. “But I'm telling you, nothing is the matter with me.”

“And I'm telling you, there is. Are you having trouble at the bank?”

“Nothing to speak of.” Buddy lowered his glance to stare at his food. “I'm not getting along with the director, but that's nothing new.”

“You've had bad bosses before. None of them have ever bothered your sleep.”

This one is different, he wanted to say, but he did not want to trouble her further. Besides, the new vice president responsible for their branch was not the reason for his nightmares. He was certain of that without knowing exactly why.

Buddy finished his breakfast in silence, accepted a topping off to his cup, and got up from the table. “I'll just go sit in the den for a while.”

“If Jasmine can see me, I'll go by on the way to the office.” He stooped to kiss his wife's forehead. “Don't worry, honey.”

“But I do, you know.” Molly gripped his wrist with surprising strength. She raised a gaze full of appeal. And fear. “I know you want to shrug it off and say this will pass. But it's gone on too long.”

Nothing he could say would calm her fears. So he nodded and kissed her a second time, and left her for the quiet of the den and his morning Bible time.

Yet when Buddy entered his den, it felt as though the nightmare was there waiting for him.

Living shadows seemed to creep out of the corners, whispering with the same voices that turned his spirit to jelly at nightâ voices he never clearly heard, except for those final words,
Forty-one days
. But he knew whatever else they were saying was bad. Very bad indeed.

He started to turn and flee, but he was fearful that if he did he would never return. Which was ridiculous. The den had been his little corner of the house since before the boys were born. Yet now it was an alien place.

Buddy forced himself forward. The leather settee by the back window was his morning abode, and he was determined to conquer this silly anxiety and take his place. His big Bible sat on the side table. He fastened his attention on the Book and forced his legs to carry him forward. He almost fell into his seat. He set his coffee cup on the cork mat and then had to use his handkerchief to mop up what he spilled.

Buddy tried to still his shaking hands as he lifted the Bible. He was studying Genesis again, having decided to read the Bible from start to finish for the first time in years. He leafed through the pages, waiting expectantly for the familiar peace to arrive and his world to settle back to normalcy. Yet today it did not happen. Instead, the nightmare's lingering edges crept closer, the sense of foreboding so strong he could almost smell it.

He found his place and focused upon the page. What he found there so startled him that he clamped his eyes shut. Praying aloud he gripped his chest, trying to push the sudden clenching pain away.

The sky was pristine blue as Buddy drove the quiet streets of Aiden, Delaware. Yet a sense of thunder echoed in the distance. Buddy saw a neighbor wave at him, and he returned the salute. But he could not recall who it was. His mind remained fixed upon what had happened in his den. He stopped at a light and prayed once more. But this time there was a difference. The words seemed to come both from him and from beyond him.
Show me what this means
, he prayed. It was a strange experience to feel that the words were more than his own. He had never felt what others called a movement of the Spirit. Never seen any need, for that matter.

Buddy was a contented man, happy just to plod along with his own peaceable form of faith. Yet this brief prayer had come from somewhere beyond his own mind, for Buddy had no real desire of his own to know what was bothering him so. In truth, he simply wanted it to go away.

The car behind him honked politely, and Buddy opened his eyes to see the light had turned green. He gave a little wave and started forward. At that moment, the brief prayer popped back into his mind.
Father, show me what all this means. Show me what it signifies. Help me to see clearly what is intended
.

This time the prayer's impact was so strong that he was forced to put on his signal and pull over to the curb. He shut his eyes, wishing he could shut his ears as well. Once more whispers gathered around him. Once more he sensed reality being peeled back. The normalcy of his life was being stripped away.

With trembling fingers Buddy pulled the slip of paper from his shirt pocket. On it were scrawled the words he had found in his Bible that morning. His hands were shaking worse now than then.

That morning in the den the words had reached across and gripped him by the heart. They had risen up and magnified until he could see nothing else. The words had blotted out the sunshine, the birdsong, and the sound of Molly in the kitchen. There had been room for nothing but their pounding force. He had written them down, not only because he wanted to remember them but also because he needed to do something to nullify their impact.

Now Buddy was forced to prop his hand on the steering wheel to reduce the trembling while he reread the passage. There in the midst of his morning routine, halfway between his home and the bank, the words came alive once more. They reached across the distance, shouting to him with explosive force from the forty-first chapter of Genesis, a passage he had read dozens of times before and never noticed. Yet this time they drained the morning of color and sound:

Animal Angel by M. J. Wilson
Girls In White Dresses by Jennifer Close
Metanoia by Angela Schiavone
Crossing Borders by Z. A. Maxfield
Boost Your Brain by Majid Fotuhi
Shorty Got My Head Gone by China White
65 Short Stories by W. Somerset Maugham
Under the Lights by Rebecca Royce
Traitor to the Crown by C.C. Finlay
The Assyrian by Nicholas Guild