Read The Widow and the Wildcatter: A Loveswept Classic Romance Online

The Widow and the Wildcatter: A Loveswept Classic Romance 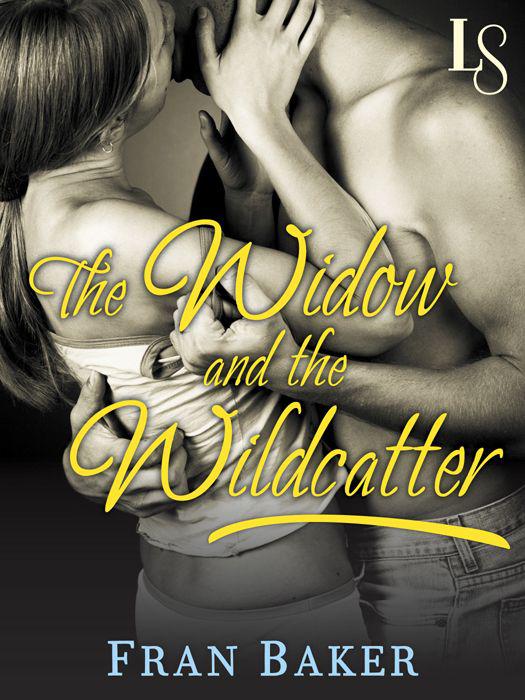 The Widow and the Wildcatter
is a work of fiction. Names, places, and incidents either are products of the author’s imagination or are used fictitiously.

Published in the United States of America by Loveswept, an imprint of The Random House Publishing Group, a division of Random House LLC, a Penguin Random House Company, New York.

L
OVESWEPT
is a registered trademark and the L
OVESWEPT
colophon is a trademark of Random House LLC.

Originally published in the United States by Loveswept, an imprint of The Random House Publishing Group, a division of Penguin Random House Company, New York, in 1988.

Excerpt from Lauren Layne’s
After the Kiss

The oil witch stood motionless in the cornfield, waiting for the spirit to move him.

His face, eyes closed, was turned to the endless sky. The wind threatened to blow his battered felt hat into the next county, but his arms remained glued to his sides, the palms of his hands parallel with the ground.

For his five-year-old daughter, watching from the edge of the field with her newfound friends, this was an everyday occurrence. The way Pa kept food in her belly and a little jingle in his pocket. But for the hardscrabble farmer and his pregnant wife, this was a last-ditch effort to change their luck.

The warm day gradually grew chilly as a wall of dirt—black mostly, but purple and tan and ocher
too—advanced across the plains. Spindly redbuds and sturdy cottonwoods alike bowed to the will of the wind. A jackrabbit, light in the front legs but strong in the rear, took a far hill in a few bounds. Heading for a promised land of sunshine and oranges, like thousands of other Okies.

His entire frame swayed to some intrinsic rhythm. Then round and round he turned in an ever-widening spiral, mumbling some kind of chant under his breath. At times his prancing became violent as he hovered over a certain spot, and then it subsided as he continued to spin.

Grit filled his eyes and mouth. Birds flew wildly over the field, some falling dead in midflight when dust clogged their lungs. Static electricity played over the farmer’s old tin lizzie. No one even noticed.

At long last the oil witch stopped dancing and started shaking. His feet seemed stuck to one particular spot. Three, maybe four minutes passed while he stood there with sweat running down his face and the farmer and his wife both hoping and praying for the best.

He leaned forward then and lowered his palms toward the ground, moving them in a half circle as if he were groping for something in the dark. The upstart wind snatched his hat and sent it sailing. Spasms racked his body, growing more and more frenzied until he collapsed all in a heap.

The farmer thought surely the oil witch was dead.

His wife pulled a stub of a pencil from her apron pocket and made a crude map on the back of a recipe for buttermilk pie.

The little girl broke a branch off a nearby bush and stuck it into the ground at her father’s feet, then turned to the anxious young couple and announced, “There’s your oil.”

Joni looked up and saw the wildcatter frowning down at her from a narrow scaffold that had just been hoisted high above the rig floor.

He crooked a hand to his ear and shook his head to indicate he couldn’t hear over the incessant din of men and machinery.

Dizziness assailed her as she considered her other option, and a sudden gust of wind intensified her dread. Then she remembered her reason for coming and, cupping both hands to her mouth like a megaphone, shouted at the top of her lungs. “How do I get up there?”

“You don’t!” he hollered down, and emphasized his edict with a dismissive jerk of his thumb.

Joni realized he’d just ordered one of the half-dozen
roughnecks working on the rig to “get rid of her,” but she’d come too far to back down now.

Her fear of heights notwithstanding she marched toward a second scaffold that held a couple of lengths of pipe, one of which had a fishtail-shaped tool attached to the end of it.

“Sorry, ma’am.” A rawboned man with a drawl as thick as January molasses grabbed her by the elbow before she could hop aboard. “The rig is off limits to outsiders.”

Joni watched, secretly relieved as the scaffold started skyward without her. Top gun she wasn’t. But neither was she giving up without a fight.

“You don’t understand.” She tried to reason with the roughneck first. “I’ve got to talk to Mr. McCoy. Today!”

Her escort kept a firm grip on her elbow as he steered her toward a long flight of steps that led to ground level. “Call him from home and leave a message on his answering machine.”

“I’ve left messages—at least a dozen in the last two weeks alone,” she argued to no avail. “He’s never called me back.”

“Mr. McCoy is a busy man.” The roughneck didn’t say “as any fool can see,” but the sentiment was plastered all over his mud-spattered face. “Besides”—he skimmed her slender figure from the corner of his eye without breaking stride—“he’s not much for mixing business with pleasure.”

“But that’s exactly what I’ve been trying to tell
you!” At the bottom of the steps Joni stopped abruptly and pulled free of his hold. “This
is
business.”

The man skidded to a halt and pushed his hard hat back off his forehead, revealing a receding hairline. “Well now, that’s a horse of a different color.”

His expression turned thoughtful. “In that case, leave the message with me and I’ll give it to him when we’re finished changing the drill bit.”

“It’s too personal,” she admitted reluctantly.

He looked at her as if she’d gone soft in the head. “Lady, make up your mind!”

Flushing, she said tensely, “It’s business of a personal nature.”

“Hey, Tex!” One of the workers on the rig captured his attention before he could form a reply. “Can you give me a hand with the draw works?”

“Be right there!” he assured the other roughneck, eyeing his excess baggage uncertainly.

Joni saw her opportunity and seized it. “I’ll wait here … cross my heart.”

He threw his gloved hands into the air as if to say “Women!” Then, muttering an impatient curse under his breath, he turned and clomped back up the steps. At the top he stopped and tossed her one of the hard hats he’d plucked from a stack on the rig floor, shouting, “If you’re gonna wait there, you’ve gotta wear this.”

She caught the hard hat, put it on over her
ponytail, and snapped him a crisp salute. “Thanks, Tex.”

He shook his head and turned away, but not before she saw the ghost of a grin cross his lips.

Joni did as she’d promised and stayed put. While she waited for the wildcatter to change the bit and come back to earth, she compared this drilling site with the others she’d visited of late.

With very few exceptions, they all looked the same. An office trailer sat across the way, with a number of dirty pickup trucks—hers included—parked in front of it. Sunshine glanced off stacks of pipe that somehow resembled a great organ. The rig reached for the heavens, and thick red mud coated everything, even …

“My best jeans,” she groused when she noticed the sticky substance clinging to her denim-covered legs with the tenacity of glue. Giving silent thanks that she’d decided to wear her waffle stompers instead of her tennis shoes, she craned her neck for a better view of the action.

Two more workers stood on the scaffold now, but Joni readily identified the wildcatter as the one in the middle. Like the rest of his crew he was dressed in steel-toed boots, mud-caked jeans, and a T-shirt that might have been white at one time. But there the resemblance ended.

Lithe and sinewy as a panther, he moved with the confidence of a man totally at ease with himself and with leading other men. And while he wore his hard hat tilted at a rakish angle, it was obvious to even the most casual observer that he ran a tight ship.

He stepped to the edge of the scaffold and picked up one of the pipes that Tex had helped hoist up to him. All eyes were riveted on his commanding figure, testifying to both the importance of what he was doing and the danger involved. Watching his men watch him with such open admiration, Joni could see why he was considered one of the best in the business.

The wind seemed to have hands as it shook the rig so relentlessly, and Joni’s stomach crawled into her throat when she realized that the wildcatter was the only one up there who wasn’t wearing a safety line. She wanted to look away but found she couldn’t. It was as if she were hypnotized by the sheer horror of it.

He leaned out over the scaffold and began lowering the drill bit toward the square hole in the rig floor. Her fear for him mounted by leaps and bounds when the roughneck to his right fit a second pipe atop the first one, causing them to swing like an elongated pendulum. And when the third man reached out with a blowtorch to weld them together, she decided she’d seen enough and closed her eyes.

Joni jumped when the diesel engine that powered the drill bit roared to life, and her eyes opened wide watching the scaffold safely return the three men to the rig floor.

When the wildcatter stepped off the plank, his crew closed ranks around him, laughing and slapping his back with beer-commercial heartiness.
The mud pump throbbed; steel clashed on steel; and all was right with the rig again.

Standing off to the side, Joni felt totally excluded until Tex caught sight of her and pointed her out.

The wildcatter’s jaw went hard as granite when he glanced her way, as if he saw something not to his liking.

As indeed he did.

Having just spent half the night and most of the morning on tour, the last thing he wanted to look at was some skinny female decked out like one of the boys. In fact, all he really wanted right now was a hot shower, a cold beer, and eight straight hours of shut-eye.

Joni kept her small face passive, though her skin paled under the country-girl freckles that were sprinkled across her nose and cheeks. Granted, she wouldn’t win any beauty contests in this getup, but he wasn’t exactly dressed to the nines himself.

She stood her ground, planning her approach.

He scowled down at her, plotting his escape.

She tipped her chin defiantly, and he found himself admiring the way she returned a man’s direct gaze.

Their eyes remained locked as he sauntered down the steps, but she was keenly conscious of the raw power concealed behind his loose-limbed stride. He pointed in the direction of the office trailer and, without a backward glance, headed that way.

Following suit, she was so tickled to think she’d finally found him that it was all she could do not
to kick up her heels. But this was business, pure and simple, and recalling Tex’s statement as he escorted her off the rig helped her to keep things in their proper perspective.